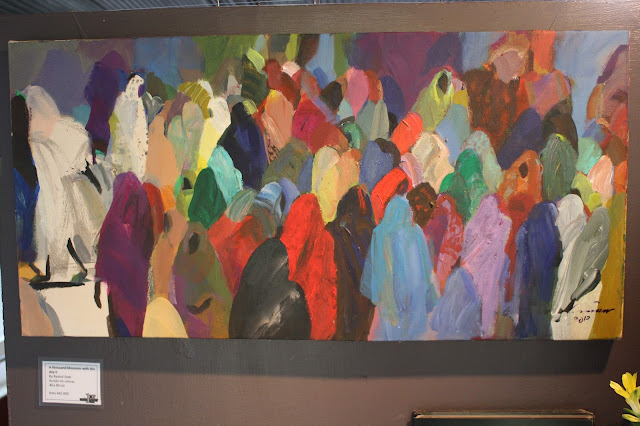 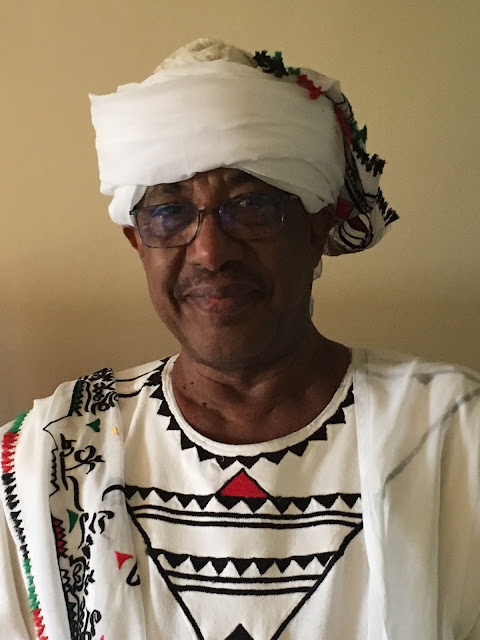 Even before Dr. Rashid Diab’s solo exhibition opened last weekend at One Off Gallery, the award-winning Sudanese artist had set up his personal ‘art studio’ on the ninth floor of the Laico Regency Hotel.


“I can’t go a day without painting,” says the globe-trotting painter who’s just come from Qatar where he’s had a highly successful exhibition at the Al Markhiya Gallery in Doha. 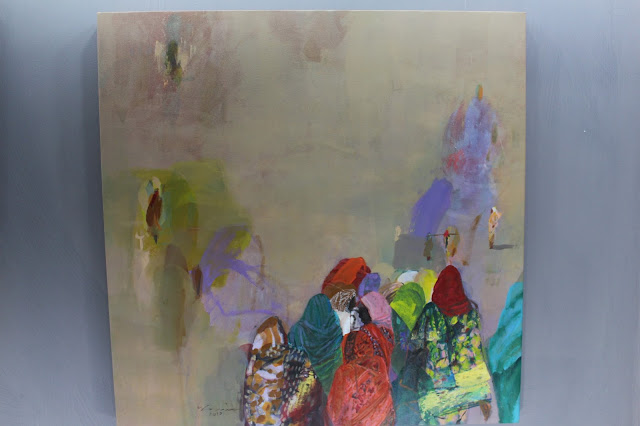 Rashid came to Kenya specifically to attend the opening of ‘One Moment in the Well of Life,’ an array of more than 28 of his luminous semi-abstract paintings. They are works that capture both the magnitude of the desert and the minimal scale of human life symbolized by moving forms, women draped in bright, flowing hijabs that seem to mask secret soulful stories that the artist knows very well. 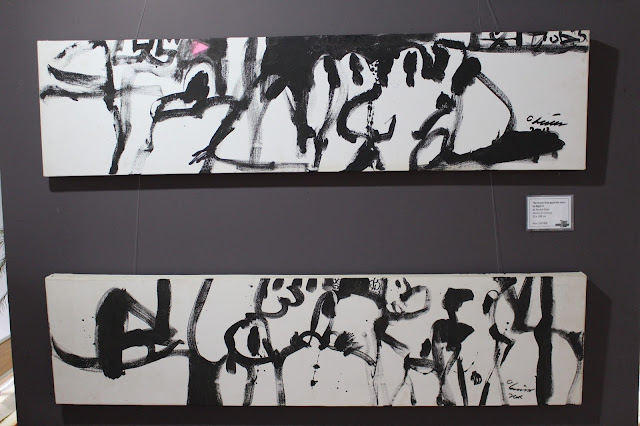 Rashid tells those stories in any number of genres, including poetry, prose and painting as well as in etchings, sculpture, fashion and furniture design and even landscape gardening. In other words, what one sees at One Off Gallery is an exquisite sampling of his artistic genius. But it’s only a fraction of his abundant array of the artistic expression he says he was born to create.


“You will need to come to my Centre [in Khartoum] to get a clearer idea of my mission,” says Rashid referring to the Rashid Diab Art Centre which he established in 2006, six years after his return to Khartoum after  living abroad for many years. 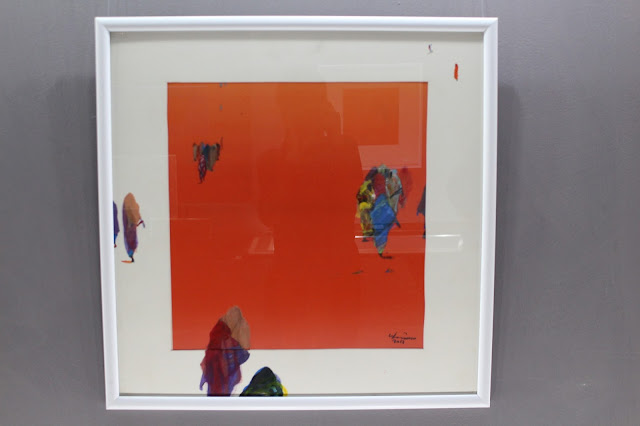 The Centre is where he’s designed everything from the gardens and villas where artists-in-residence come to work, to the teaching practices that include workshops, art classes for all ages and art talks by world-class artists that he invites to come speak and inspire young Sudanese artists. 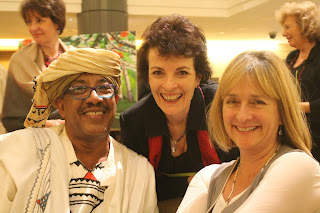 The Centre also has a gallery, but it’s filled with up-and-coming artists’ works. His own art is rarely shown there. More often, it’s on exhibition in museums and art centres in places as wide ranging as Spain (where he studied and taught for years), Scandinavia, South Korea and Syria, Egypt, Ethiopia, Iraq and Washington, DC, Kuwait, Khartoum, France and New York City.


Rashid’s capacity to create such a vast array of artworks relates directly to the mission he says began as a child’s dream. “That dream was to fill my world with art even though the dream wasn’t supported by [local] institutions or even my people’s awareness of the value of art.” 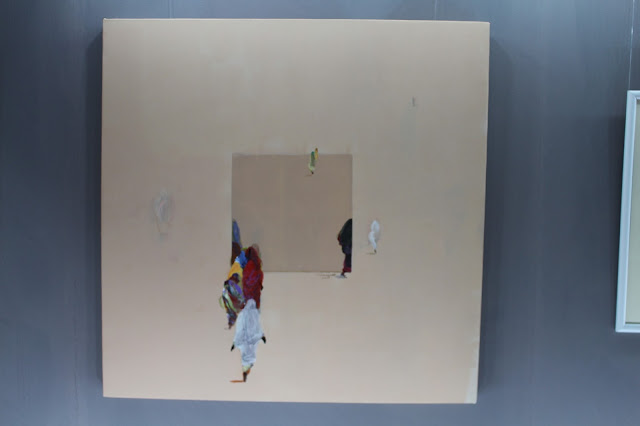 The dream evolved into a mission, to create a cultural revolution in his country. “That is why I finally returned to Sudan after living abroad for 20 years.” Rashid received all his four university degrees, including a Ph.D, in Spain. It’s also where he wrote ‘The Philosophy of Sudanese Art’ aiming to answer questions that no one was even asking before he committed himself to revolutionizing the world’s view of Sudanese and also African art.


His decision to return home wasn’t an easy one to make. “I was teaching [nine years in Spain] and enjoying a good life. But all the years I was away, I was thinking of my country,” says the artist in an exclusive interview with BD Life.


“I wanted to come home and develop a culture that reflected a new vision, one that blended the Arab and the African,” he adds, pointing to the filigreed borders on his turban and galabia which he says are his original design. 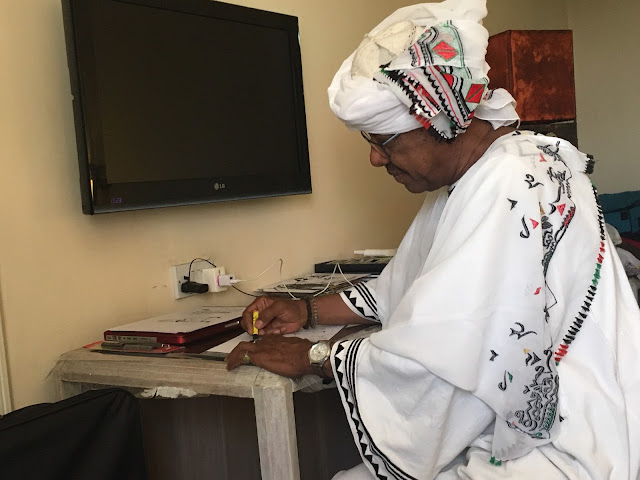 Rashid at work in his make-shift art studio at the Laico Regency Hotel, Nairobi, 1.29.18

As a child Rashid got little or no encourage to be creative. Yet he says he never wanted to do anything else. Being the last born of 14 offspring, his family felt he’d never make a living as an artist. And yet currently, his art sells on the global art market for millions of shillings. Indeed, at One Off his exhibition includes several stunning paintings that are selling in the millions.


“I can’t really sell them for less since those are the prices they go for on the world [art] market,” he adds. 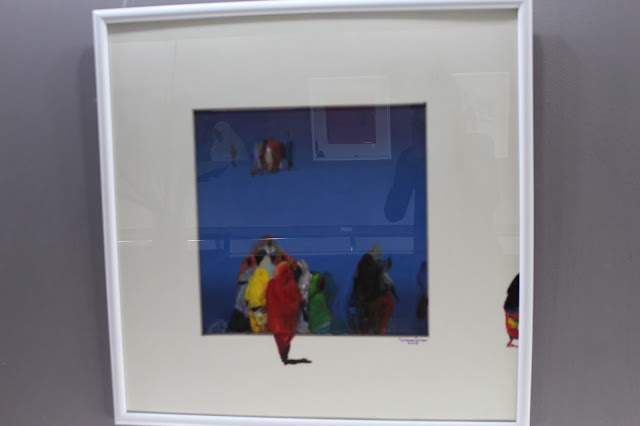 But there’s little doubt that Rashid has worked hard to achieve his success. He’s been single-minded all his life, which is why he sets up his personal art ‘studio’ in every hotel he visits while his works are being displayed.


“I’d like to devote all my time to my art,” he says. It’s a sentiment that implicitly explains why he travels with mounted papers, boxes of oil pastel (crayons), water color and acrylic paints and charcoal wherever he goes.


He’s an artist ever-prepared to devote every moment to his mission, to being and doing fine art. 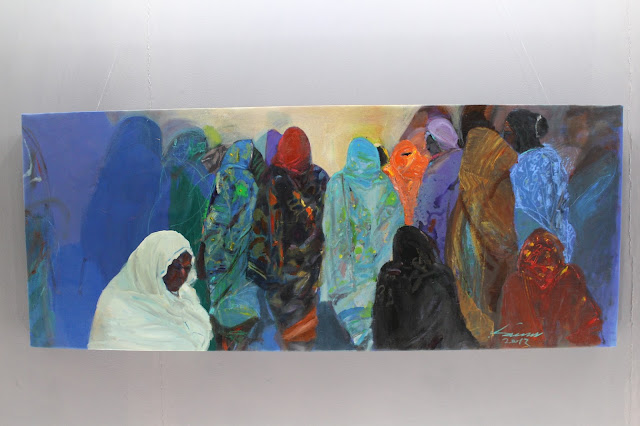 Posted by Margaretta wa Gacheru at 02:20