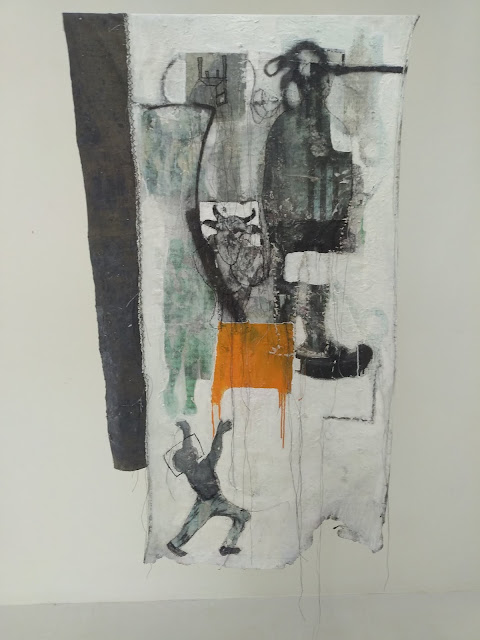 Few Kenyan artists create anything like what could be called ‘protest art’. Yet Kaloki Nyamai definitely qualifies as one of them. In his just-ended exhibition at Circle Art Gallery entitled ’Mwaki Nginya Evinda Enge’ (Kikamba for ‘The Fire Next Time’), Kaloki like James Baldwin reflects on the tensions and contradictions of his people’s past and present.
In Baldwin’s case, his reflections were specifically on race and the historical legacy of slavery as it’s impacted African Americans’ lives. In Kaloki’s case, his art also explores issues of identity and the historical legacy of, not slavery, but colonialism, including the pre-colonial and post-colonial. 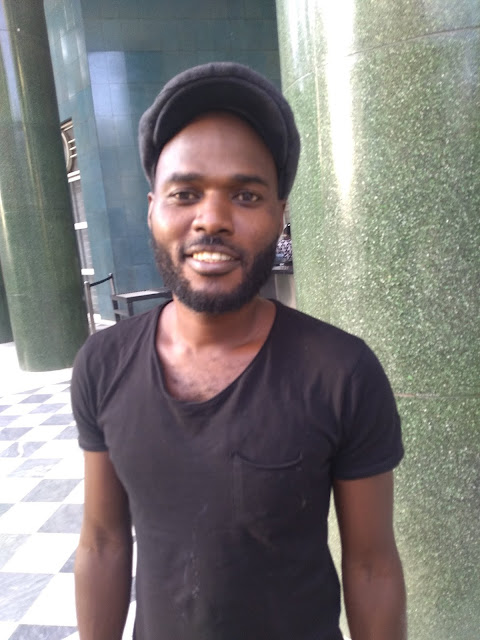 His multimedia art, which has transitioned dramatically from being more figurative and picturesque to becoming conceptual and symbolic, isn’t an easy read. But it isn’t meant to be. Its cryptic, apparently chaotic style is part of what makes it subversive and radical.
For like his beloved grandmother Mutuve who got into trouble for composing and singing songs that were truthful, hard-hitting and inadvertently political, Kaloki’s art explores sensitive issues of power, patriarchy and a post-colonial Kenya that could also be seen as controversial.
Like Mutuve’s music, Kalobi’s art tells stories meant to rouse awareness of what was lost, broken or simply forgotten of Kenya precolonial past. The recurrent symbols used in most of his tapestry-like canvases mainly come from pre-colonial times: like the three-legged stool (a symbolic seat of power), the cow (a symbol of wealth) and sisal string which had immense value in pre-colonial Kamba culture where it was used for making everything from plates and ropes to clothes, mats and other types of home interiors. 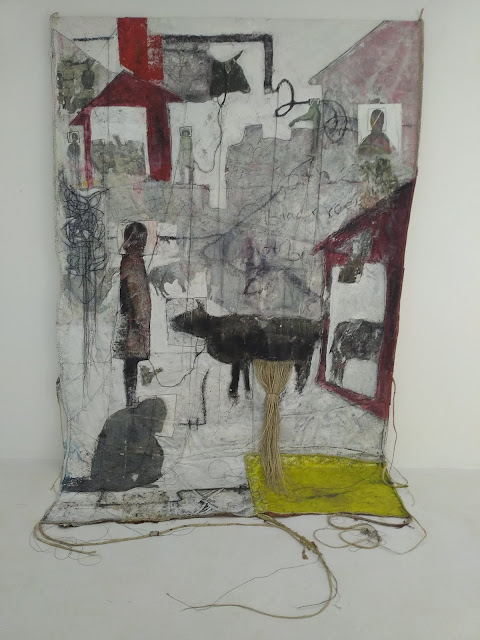 Kaloki uses symbols from the past in several ways. First, he uses them to speak to and critique the present. But also he uses them to explore and expose contradictions arising in a culture that has yet to address (leave alone grapple with) the colonial hangovers plaguing our present times.
For instance, in one painting a young woman stands atop a stool, suggestive of her having attained a semblance of power or social equity. Yet the stool is broken, as is the culture, Kaloki implies. Her power is illusory; the status quo still holds.
Similarly, in a work like ‘The Activist’s Daughter’ (Kana Kaa Munenei), it’s the man standing on the stool. And despite his apparently being ‘x-ed’ out of his patriarchal reign, given that a girl holds a large megaphone, he remains standing on the stool, irrespective of the ‘x’, says Kaloki. 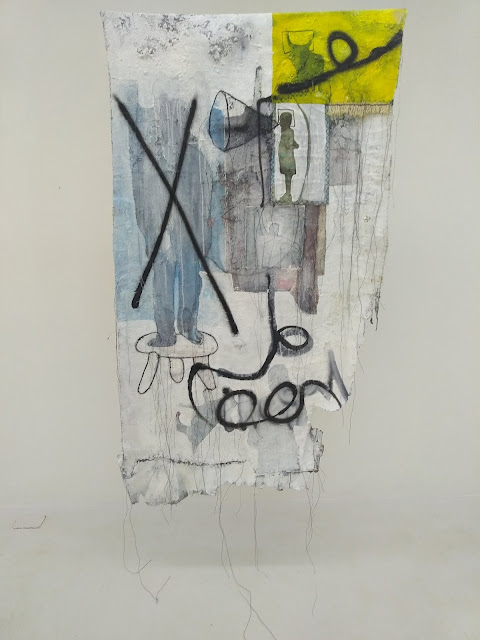 Using charcoal, acrylic and spray paints with sisal, wires and string from burnt tires, Kaloki’s white-washed canvases have a three-dimensional effect since he’s stitched a second set of stories in sisal on the other side of every work. By so doing, he says his canvases aren’t meant to serve as wall-hangings. They’re meant to be free-floating so they can be seen from various perspectives.
What’s more, the stitching has special relevance to this multi-talented artist (who’s also worked in film, fashion and interior design) since it signifies his appreciation of his coming from a matriarchal culture (where women usually are the ones who stitch).
It also implies that Kaloki sees some hope for healing the country’s wounded culture, a culture that has yet to deal with the trauma of colonialism and war. 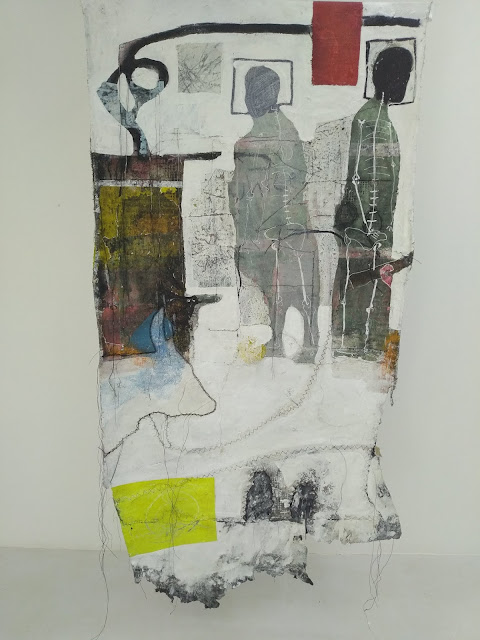 Ultimately, Kaloki’s biggest complaint and protest is against his fellow Kenyans who continue to fawn over the rich and powerful, be they black or white. It’s a sentiment best expressed in a painting of a small man at the bottom of the piece, cheering the Big Man at the top. Kaloki would prefer the little man reclaim his identity and dignity. 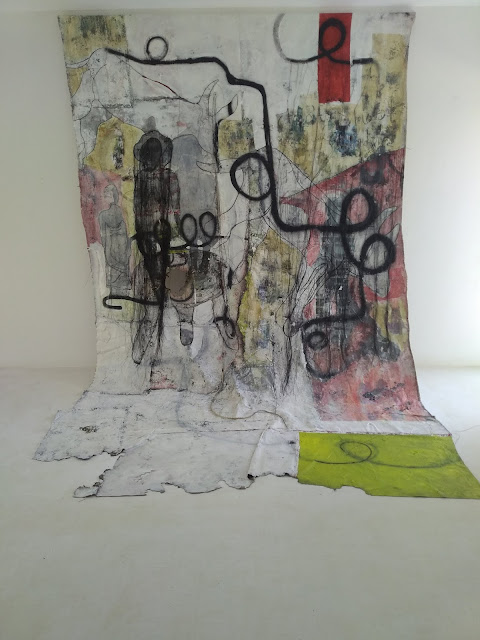 Posted by Margaretta wa Gacheru at 10:45