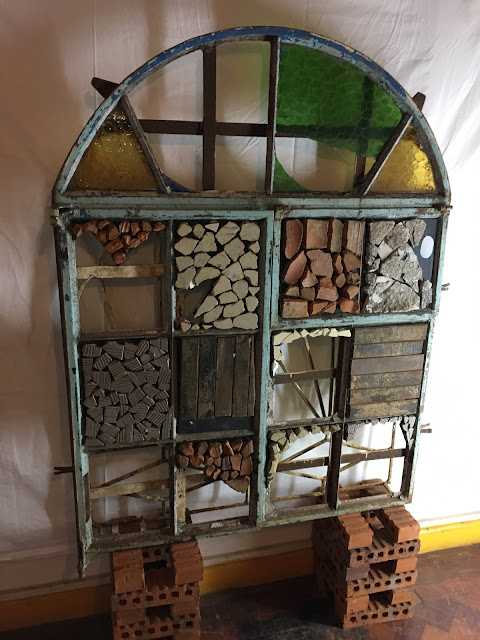 'Demotion Art' conceived by Meshack Oiro as part of the British Institute of East Africa and of the Demolition Installation curated by Joost Fontein and Danielle del Vicario. Meshack's collage-like sculpture is made from 'rubble' or rocks left after demotion teams come in to destroy structures for profit. photo by Margaretta

If anyone doubts Nairobi’s status as a thriving regional centre for the visual arts, one only needed to go round the city this past weekend to see just a few of the artistic initiatives that have been underway.


Everywhere from Kuona Trust, One Off Gallery and Alliance Francaise to the British Institute of East Africa, (BIEA), Red Hill Gallery and the Circle Art Gallery were mounting exciting exhibitions.


A few of the most intriguing just ended, as in AF’s ‘Connectivity: More is Less?’ show featuring artists from Maasai Mbili and Dust Depo; Michael Soi’s Bevy of Beauties at Kuona, the revenues from which he plans to donate to the Kuona Artists’ Collective, and BIEA’s multifaceted and multi-media ‘Sensing Nairobi’ showcase that took over the eninstire institute (as well as parts of Kibera, Mathare and Buru Buru) last weekend.


The second of the ‘Remains, Waste and Metonymy’ series, I found ‘Sensing Nairobi’ far more interesting and well organized than the first RWM event. Of special interest this time round was the three-pronged ‘Demolition’ installation curated by Joost Fontein and Danielle Del Vicario and including three wonderful ‘rubble’ sculptures by Meshack Oiro who’s now onto something I’d call ‘demolition art.’


Fortunately, ongoing shows continue at Red Hill where a slew of Sudanese artists’ works are on display through mid-March and at One Off Gallery where Paul Onditi’s ‘Background Effects’ bears witness to the more abstract realms that the artist evoked in his previous paintings which charted the travels of his beloved character, Smokey.


But the exhibition that went up late last week but officially opened this past Wednesday night is probably the most ambitious and illustrious collection of regional art curated by Danda Jaroljmek since she launched Circle’s ‘Modern and Contemporary East African Art Auction’ four years ago. For not only will the Auction feature artworks from ten countries (namely Kenya, Uganda, Tanzania, Ethiopia, Sudan, Egypt, Zimbabwe, Congo, Seychelles and South Africa), nearly all of which are being previewed at Circle’s James Gichuru Road gallery prior to the actual Auction at Nairobi’s Hotel Intercontinental on February 27th.


But quite a few of the artworks have a vintage patina since they’ve come out of a number of private collections, meaning the art was often procured several years ago.


This is certainly the case with Gakunju Kaigwa’s exquisite Vermont marble bust, Peterson Kamwathi’s ‘Constitutional Bull’, Robin Anderson’s rare batik on silk ‘Maasai Women’ painting and Ali Hasein Darwish’s elegant ‘Forest’. Darwish is originally from Zanzibar but he hasn’t been traceable since he returned to his ancestral home in Iran; and the late Robin Anderson was the co-founder of Gallery Watatu with Yony Waite, two of whose paintings will also be in the auction.


But at the same time as Circle has been the beneficiary of various art collectors who’ve chosen to put the early works of everyone from Jak Katarikawe, John Diang’a and Charles Sekano, (the South African artist who lived in Kenya for several decades before returning home in the 1990s) into the auction, Danda has also assembled quite a few contemporary works directly from the artists.


I must commend Circle Art for sharing this rich array of not only East African art but also works from Central and Southern Africa as well.


Meanwhile, Circle has also curated another Pop-Up Paper Art exhibition, this one currently underway in Lamu through February 27th. That show features works mainly by artists who are not included in the auction (apart from Boniface Maina, Onyis Martin, Shabu Mwangi and Yony Waite). But at least one of them is also in Lamu attending Herbert Menzer’s 4th annual Painters Festival.


The Painters Festival used to include primarily artists from Europe, especially from the Netherlands and Germany. But increasingly, Kenyan painters have been invited to participate as well. This year they include Nadia Wamunyu, Waweru Gichuru, James Njoroge, Zihan Kassam and Boni.


The Painters Festival (which apparently got renamed this year ‘the Lamu Art Festival’) is an annual event which Mr Menzer launched out of love for art and love for Lamu, especially Shela. The retired restauranteur from Hamburg is a marvelous host and had researched the island so well that he daily ensures that his artist-guests have new and picturesque locations where they can stake out spaces of their own and paint to their hearts’ content all day.


All the artworks created during the two week festival will be on display at the Lamu Fort next weekend, from February 17th through 19th.


Posted by Margaretta wa Gacheru at 03:51