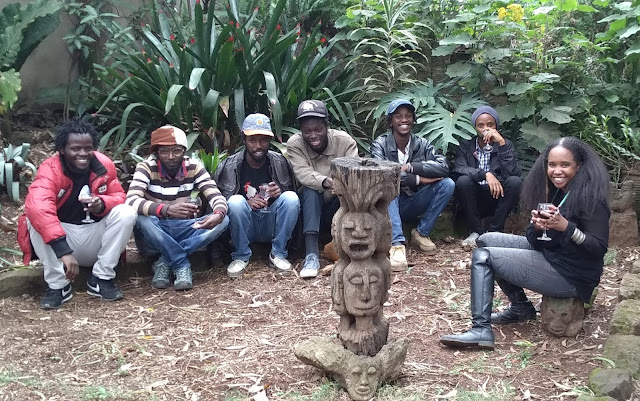 It might not be right to call the group exhibition which opened this past Sunday at Polka Dot Gallery ‘incubator art’ since that might sound demeaning. On the contrary, what has been happening at Brush tu Art Studio these past two years has been most laudable. That’s because the founding artists of Brush tu have opened the Studio door as well as their hearts and mentoring skills to capable young Kenyan artists.
It’s the day-to-day mentoring over weeks and sometimes months by artists like Boniface Maina, Michael Musyoka, Waweru Gichuhi, Elias Mong’era and David Thuku that led Waweru and Emmaus Kimani (another relative new comer to Brush tu) to describe the majority of artists on show at Polka Dot as having been ‘incubated’. 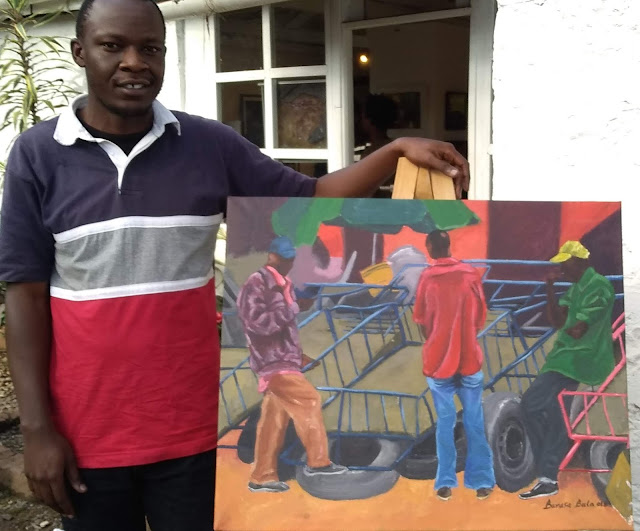 Baraza Bala with 'Ask for Transport I' at Polka Dot Gallery

Call them artists-in-residence, apprentices or mentees, their works at the Karen gallery illustrate well how effective the mentoring process has been. For instance, someone like Abdul Kipruto first came to Brush tu as an apprentice working closely with Michael Musyoka. But then, when the Studio invited first Peterson Kamwathi and then Thom Ogonga to give printmaking workshops to the mentees, Abdul got hooked on printmaking. That was more than a year ago, sufficient time for Abdul to gain a mastery of the process as evidenced by prints he’s got in this show and at Tafaria Castle.
Baraza Bela also says he learned a lot working with Musyoka as well as with Elias Mung’ora, both of whom are among the few long-standing Brush tu artists who have stunning prints of their own in this show. One can clearly see Mung’ora’s influence in Baraza’s paintings. He not only takes ordinary working Kenyans as colorful subjects of his art. He’s also as careful as Mung’ora in painting interesting poses of people in motion that look anatomically correct.
Mung’ora also has a couple of paintings in the show which contain characters that reflect a similar sort of dynamism to his mentee’s. His subjects often look preoccupied, as if they’re in the midst of activity that we wouldn’t want to interrupt. 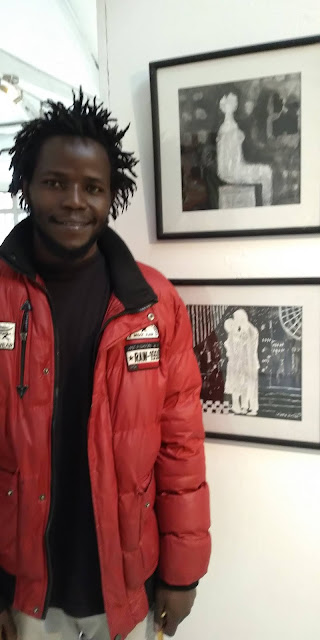 Munene Kariuki also has paintings in the show. However he too has been stretched and challenged to be more experimental with both his materials and his subject matter since he’s joined the ‘incubator’ process at Brush tu. His two small black and white works are done in charcoal, pastel and ink, and they’re stylistically distinctive.
Equally surprising are the pastels on watercolor paper by John Mbiyu Ng’ang’a. His use of mat colors to tell stories is illustrative as well as quite fun. 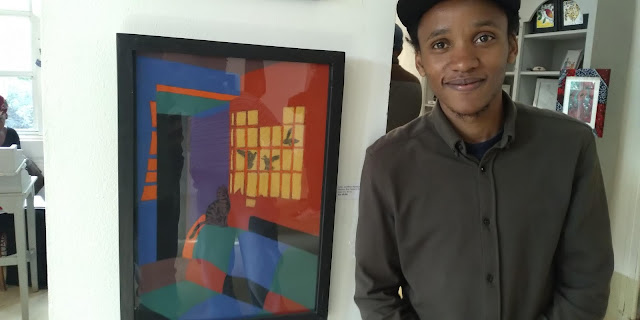 But it’s the artworks by Sebawali Sio and Moira Bushkimani that frankly impressed me most at Polka Dot. I might be accused of gender bias. But all the same, Moira’s use of ‘found objects’ to create fascinating sculptures is notable. The only other sculptor in the show is Alfred Sila. He too uses ‘found’ metal objects which he welds together to make a covertly political statement about ‘service’. In this case, he’s referring to the lack of it on the part of government. The ‘service’ he says, is symbolized in the broken knives and battered tea cup, all of which are obviously no longer serviceable.
Moira’s sculptures are made out of wood which has a natural weather-worn look to it. Craggy and shaped through a rugged organic process, she says she simply found the wood, took it home and washed it. After that came the wires, beads and imagination to see those basic elements could give a semblance of fire, which is also one of the elements she explores in her art. 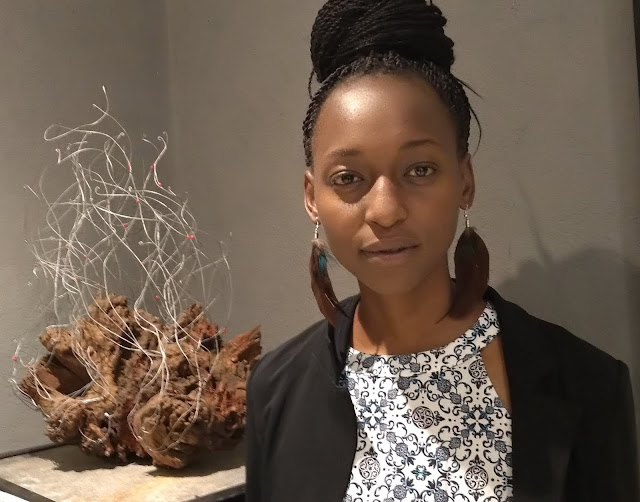 Sebawali’s work is also remarkable because it brings out facets of her artistry that we knew was there but hadn’t been as clearly until now. She still explores the theme of Woman, only her semi-abstract image on layered paper is a giant gem that reflects the layers upon layers of thoughts, motives and multiple concerns that invariably belong to women. 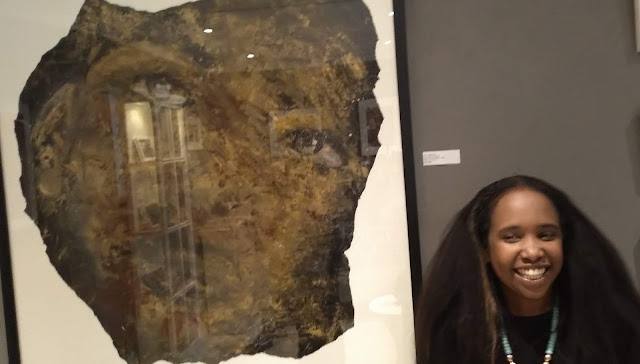 Finally, one of the original artists-in-residence at Brush tu is Emmaus Kimani. His part in Brush tu is both artistic and functional, since he’s not only a photographer who captures sights in our city that others may overlook. He’s also got accounting skills that provide an invaluable service to Brush tu artists.
Meanwhile, this past weekend at Nairobi National Museum, Kenya Museum Society held its annual Affordable Art show, enabling scores of local artists a chance to show and sell their artworks. A percentage of sales also goes to KMS for museum-related projects. 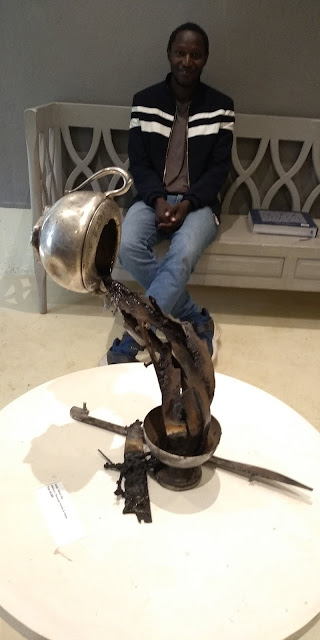 Alfred Sila (seated behind his art) works with found objects. Here he uses metal knives and cup to critique civil servants who have no sense of public service.


Posted by Margaretta wa Gacheru at 12:27