Heartstrings’ latest production, ‘Don’t Panic’, is a stunner of a comedy. It’s a show that deals with the usual issues of infidelity and betrayal but from an unusually ingenious point of view.
At the outset, you won’t imagine that Patricia (Bernice Nthenya) and Mashudi (Victor Nyaata) are anything other than love birds thrilled to be celebrating their third anniversary of marriage. They look like the ideal couple. Even Victor’s single younger brother Zadock (Nick Kwach) admires them so much he’s thinking of following their lead and getting hitched himself.
Patricia raises one small point in passing about Mashudi’s infidelity in their first year of wedlock which broke her heart. But the incident is skipped over lightly, as if it’s of no consequence. But it is. 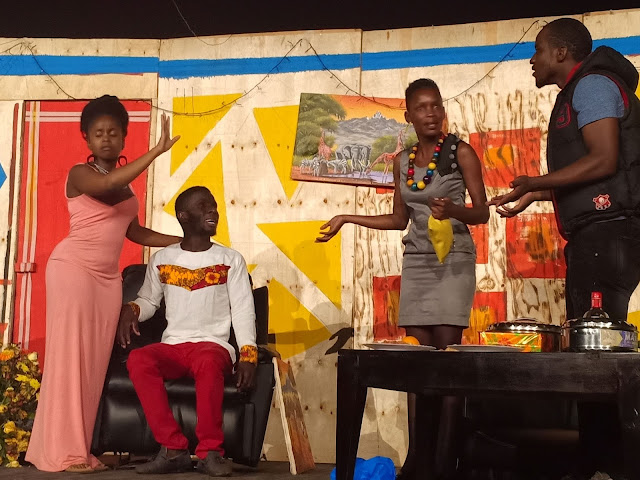 In the last scene of the play, we learn Mashudi’s infidelity hit her so hard, she took drastic action, unbeknownst to him. She even knows about his current affair with Paravina (Mackrine Andala), who has the audacity to show up at the party. But Pat doesn’t let on that she knows. Instead, she acts as if all is well until the time is right.
She doesn’t reveal her secret until after Paravina shows up, intent on exposing her lover’s duplicity to Patricia and then making her demands. But it doesn’t work that way. Once Zadock figures out who this woman is, he tries to rescue the situation by claiming she’s his new sweetheart and wife-to-be.
That ruse also gets crushed once Zadock’s real sweetie, Ruena (Cindy Kahuha) shows up and hears the group talking about Nick’s new ‘bride to be’. She’s furious, so the truth has to be told.
But before Zadock gets a chance to explain, Patricia spills the beans to say she’s known about Mashudi’s infidelity from the beginning. She even knows that Paravina is three months pregnant with Mash’s seed.
But the real shocker comes as she explains why she kept quiet and what she did in the meantime. She had drawn up divorce papers after Mashudi’s initial infidelity which he’d apparently signed. After that, she said no more about it even though she quietly followed through on her threat and legally divorced the guy. Staying on after the divorce was her way of “resisting being made a victim”. 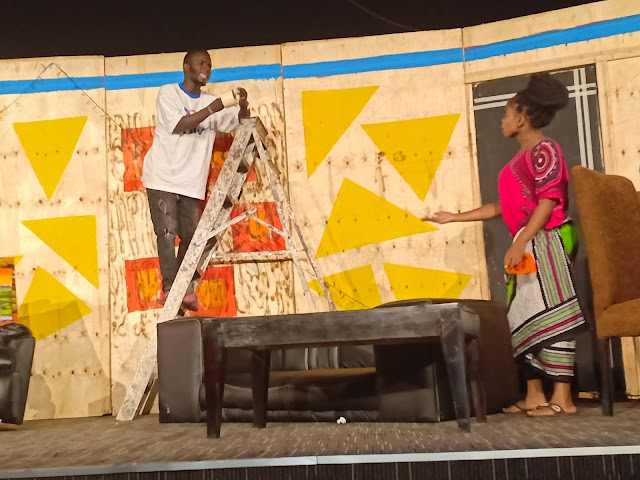 She admits she could have left, but then she would have been just another impoverished woman with no home of her own. So instead, she played the same game as Mashudi who lied about his devotion to their marriage, and so did she. It’s her way of keeping her head up high while devising the best strategy of escape.
In the end, right after she spills the beans and before she walks out the door, Patricia confesses that Amos, the grounds-keeper, is none other than her new boyfriend.
‘Don’t Panic’ may sound like serious stuff, but in keeping with Heartstrings’ style of hilarity, there is plenty of humor in the show, especially after the Pastor (Cyprian Osoro) shows up to celebrate the couple he’d officially wedded three years before. Making a flamboyant entrance, the Pastor can’t help preaching, enlisting Zadock in Bible readings as he repeats the righteous verses with theatrical flare, particularly those ironically related to the recklessness of the man who indulges his lusts with women.
What is slightly inconceivable is the way Patricia pretends that all is well when it was not.She even welcomes Paravina into her home and practically treats her like a co-wife without revealing what she knows. Assumedly, she’d given lots of thought to what to do since she was faced with the same dilemma that many Kenyan married women have, namely how to save face and not reveal the humiliation of your spouse’s infidelity and betrayal. Patricia’s strategy was possibly the only path she could have pursued—namely, staying patient, bidding her time until the moment was right for her to get out and start again. 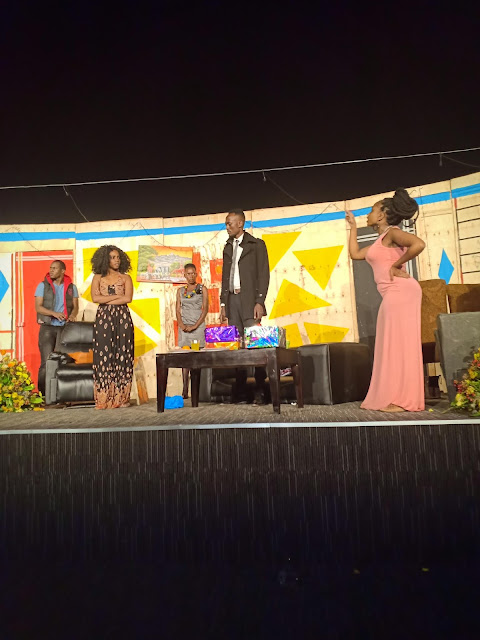 There’s a message for married women in ‘Don’t Panic’. Maybe not to do exactly as Patricia did, but by refusing to be trapped, she resisted being tricked and victimized. She plotted and planned how to take her life into her own hands and not depend on or wait for her man to change. By choosing to chart her own course, she might get more married women thinking—how best to do the same.
In ‘Don’t Panic’, it is the woman who has the last word!


Posted by Margaretta wa Gacheru at 02:24