DRAMA TAKES OVER THE TOWN, STARTING AT THE LIBRARY 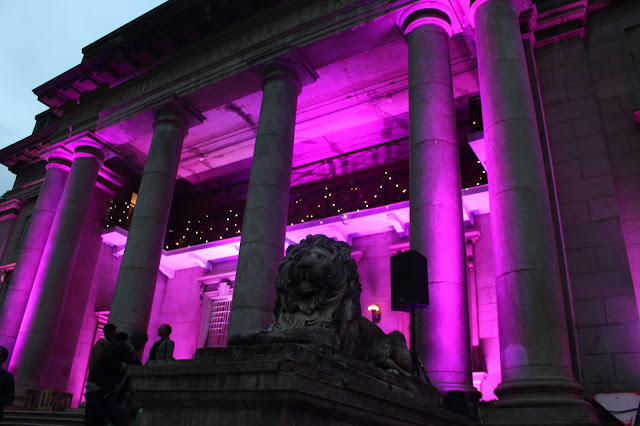 McMillan Library by night with the Book Bunk

Of all places, McMillan Library was the site for high drama last Thursday night. It was a mix of comedy, satire and song blended with a healthy infusion of participatory theatre.
There was one other essential element to the night, which had been choreographed by the Book Bunk, the NGO recently founded by Angela Wachuka and Shiro Koinange to renovate and refurbish the colonial vestige called McMillan Library. That element was the data these two illustrious women had to collect just to begin planning the process of renovation.
Both Wachuka and Shiro have been book lovers from early on. But it was a stroke of mad genius for them to come up with the idea of rejuvenating one of Nairobi’s oldest and best-constructed bluestone buildings, including its two library extensions, one in Kaloleni the other in Makadara.
Lighting up the pillared and ‘lionized’ front entrance of the Library with an alternating purple and green glow, the Book Bunk team escorted guests all around McMillan’s interior which was still stacked with piles of papers, dusty folders and old books few of which were by African writers.
The shortage of African lit in the library was fully explained when Bryan Ngartia and Eddie Kagure of the theatrical team, ‘Too Early for Birds’, gave a rousing rendition of McMillan Library history, curated by Story Zetu. It had been built in memory of Sir William Northrup McMillan by his widow back in 1931, designed to cater for a strictly European readership.
But to prove the Library’s worth saving, Wachuka and Shiro had to collect empirical data to illustrate that Kenyans currently use the three spaces in substantial numbers. Their data’s so impressive they managed to get Goethe Institute involved in the process, including sending McMillan’s Chief Librarian, Jacob Ananda, to study the library system in Germany.
Eric Wainaina also entertained a library-full of guests with songs from his forthcoming album, ‘Dreams in Stereo’, after which Sheba Hirst introduced members of the Library staff as well as senior members of Nairobi County government. The County folk had been given a green light from Governor Sonko to sign on with the Book Bunk project.
Meanwhile, Samosa Festival also had its drama last Sunday when Zahid Rajan invited Aleya Kassam to perform her sassy poem, ‘The 44th Tribe.’ (Aleya also performed last night with Sitawa Namwalie in ‘Love, Loss and Discovery’ which they co-wrote.) Aleya was part of the festival preview that will include an open-mic, films, fascinating forums, puppetry and flavorful theatre by Hearts of Art who will perform this Sunday in ‘All I ever Wanted’ at the Alchemist.
Last weekend, Hearts of Art performed another one of Walter Sitati’s plays. They’d staged ‘What Can’t Kill You’ at PAWA254 several weeks ago, but were called back by the public who’d heard about the writer’s salty satire.
Sitati hits on everything from the media to the millennials to permissive, yet over-protective mum’s like the one played by Ellsey Adhiambo Okatch whose daughter, bratty Boitumelo (Abigail Were) grew up to be a thoughtless, adult brat (Pauline Kyalo). The one discerning insight the daughter has in the play is when she identifies her mother as the one who rendered her useless due to the mum’s lack of enforced discipline.
For a writer who’s never worked in the media, Sitati has immense insight into how they operate. He also portrays the complicated relationship between parents and private school heads with acuity. Even his take on nepotism and the way it can kill an organization’s success is explored as both bosses (Ellsey and Walter) at the ‘Stinging Tongue’ magazine hire their relations to the detriment of the magazine.
Finally, these past two nights at Braeburn Theatre, John Sibi Okumo again directed ‘Constellations’ costarring Silvia Cassini and Philip Coulson. My copy will go to press before I see the show again. But I know they had to bring back the play this week after seating got filled for all of last week’s shows.
Word had gotten round that ‘Constellations’ is a show that not only sold out seats in London and New York. It’s also one of the most charming and enlightening scripts to be staged here in recent times. For it’s not often that theoretical physics, leave alone the science of beekeeping, are tantalizing topics found in the same story. Constellations is a sweet love story besides. Here’s hoping they stage ‘Constellations’ one more time.


Posted by Margaretta wa Gacheru at 07:51