BOOK REVIEW: The President is Missing

By Bill Clinton and James Patterson 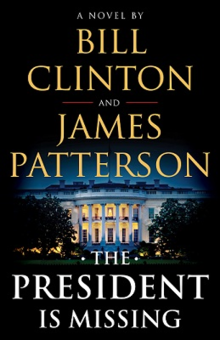 ‘The president is missing’ shot to the top of the New York Times best sellers list practically from the day it came out in early June.  In part it was because former US President Bill Clinton was said to have penned a political thriller for the first time and folks were curious what he’d reveal. Not only that, he’d teamed up with the block-buster novelist James Patterson who’s got an immense fan-base to begin with.
But the best reason the Clinton-Patterson ‘collab’ has done so well is primarily because Patterson knows how to spin a splendid political thriller and Clinton knows the in’s and out’s of Washington. Some say Patterson is the one who approached Clinton so he’d be assured to have insider authenticity to his story about cyberterrorism, espionage in and outside the White House and various other details related to issues like impeachment of a president.
For instance, could it even be plausible for a US president to ‘go missing’, having so extensive a security service and surveillance system in and around the White House? Yet President Jonathan Lincoln Duncan pulls it off.
The former Army Ranger and Gulf War veteran has little choice if he means to save his country from a cyber-attack that will conceivable shut down every computer system across America, including all the military, financial, infrastructural, telecom and even health care services. Having foreseen such a threat, the Code Name of which is ‘Dark Ages’, the President allows only a select few in his inner-most top security circle to know what he’s up to and how he’s trying to waylay this ultimate act of cyberterrorism.
Yet the President (who’s a widower with a severe hemoglobin problem of his own) has an even more immediate problem than the prospect of being impeached for conversing with a known terrorist (which he did) or witnessing the chaotic havoc that would surely ensue if and when the triggered countdown of the attack clocked out. It was his discovery that there was a traitor in his inner circle, leading him not to trust anyone but his Chief of Staff.
Surrounded by brilliant women, including the number one Ukrainian cyberterrorist who’d created a practically impenetrable cyber virus, this president’s life titters on a viral edge virtually throughout the novel.
But with the typical Rambo-like rugged individualism that Americans are supposedly renowned for, Patterson’s president second-guesses all his foes though not before the suspense has kept you up a night or two till you find out whodunit and why.
It’s complicated to say the least, but the book’s perfectly timed to answer various questions you might have about America’s current president. Read the book and find out how that could be.


Posted by Margaretta wa Gacheru at 09:55