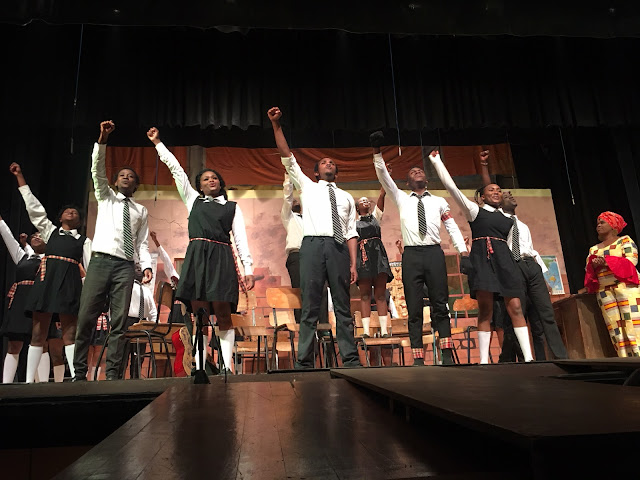 The theatrical production of ‘Sarafina’ that we saw this past weekend at Kenya National Theatre wasn’t a revival of the original live musical by South African playwright Mbongeni Ngeme which made it all the way to Broadway in New York.
Nor was it the film version of the original tale about that historic moment when in 1976 the youth of Soweto rose up and literally rocked the Apartheid regime at its roots.
Nor was it even like the 2004 Kenyan interpretation of the original show, the cast of which came to see Nairobi Performing Arts Studio’s interpretation of Sarafina last Saturday night. 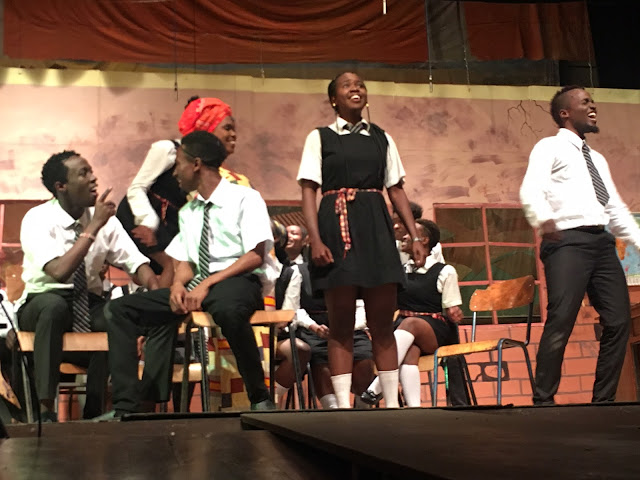 But what that version did was to take the actual history and set it in a context meant to make the story relevant both to the past and the present day when freedom is still ‘coming tomorrow’ for many people of color the world over, including in South Africa.
All four versions of Sarafina are grounded in the actual history of that moment when the children rebelled against Apartheid and played a fundamental role in ultimately bringing down that oppressive racist regime. It was also grounded in the young people’s affection for their absentee anti-apartheid leader Nelson Mandela.
Yet anyone watching the show over the last fortnight at KNT needed to recall that when the script was first shaped, Mandela was still in prison and Apartheid was just as violently racist as it ever had been.
Plus the Soweto youth understood that being spoon-fed a curriculum fashioned by Afrikaners in their language was next to useless in the wider world,  so their burning schools down was not just an act of resistance to the system. It was also a symbolic deed mean to show the State that what they wanted was a real education.
What was stunning about the NPAS production was its mixture of dreamy romanticism and violent realism. It was a mix that got impeded a bit by technical flaws in Saturday’s show, especially in terms of sound since there was a bit we couldn’t hear, either because the microphones were too far from the cast or the music overwhelmed the actors’ speech.
The choral renditions of much-loved songs were excellent as was the choreography. But parents should have been advised not to bring their babies to this show since it was far more violent than anticipated and kids (in the front rows especially) loudly complained. 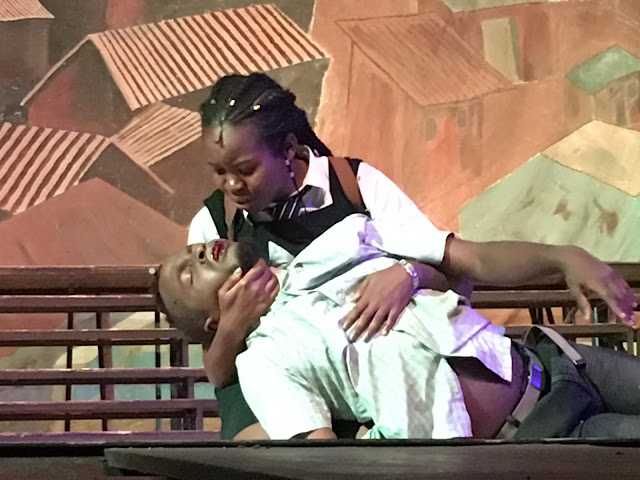 Director Stuart Nash clearly went for realism when he allowed the ‘Torturer’ (Gilad Millo) to literally water-board Teacher (Mkamzee Mtawali) on stage. Indeed, with the children in the audience, I too was scared for the actor’s health and safety since the ‘home guard’ equivalents’ appeared painfully powerful. Plus the riots resulted in actual ‘murders’ on stage, which was disturbing not only to the Torturer who took revenge for his lackey Saboti’s (Patrick Oketch) murder by ‘killing’ Teacher and several student leaders as well as torturing Sarafina before our eyes.

For me what made those painful performances both poignant and powerful came at the end of the show when cast members stood up and recited moments in history that reflected on people’s resistance not only to the racism of the apartheid regime but to the racism that still oppresses people of color worldwide as for instance, when neo-Nazis and other white supremacists preach hate speech in this day and age. 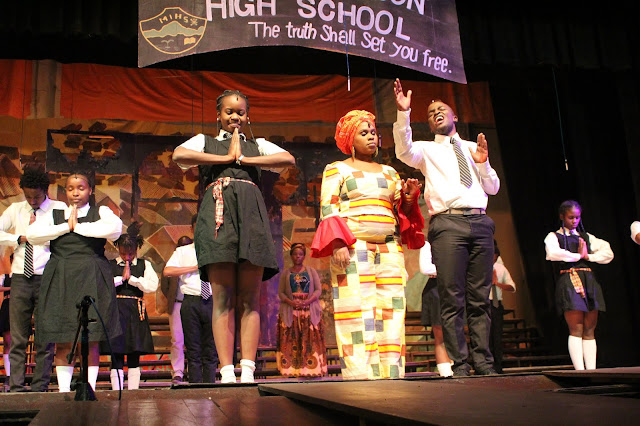 Sarafina (Elsie Akinyi) with Teacher (Mwamzee Mtawali) and Crocodile (Fanuel Mulwa with students praying for Mandela and freedom
So while the NPAS production of Sarafina was radically different from what audiences might have expected, its message resonates much further than anticipated since the formal system of Apartheid may be gone, but the challenge of achieving racial equity is still alive and apparent to this day. That is why one must appreciate the sacrifices that not only Nelson Mandela made (celebrations of the centenary of Mandela’s birth were thoughtfully timed to coincide with the NPAS show), but also the selfless sacrifices that the courageous youth of Soweto made. That was for me the resounding message of this truly memorable production of Sarafina. 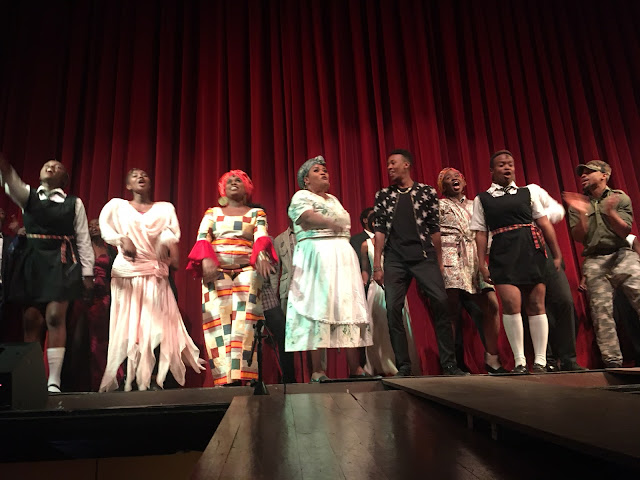 The good news is that the show is likely to come back to Kenya Cultural Centre quite soon. Many thanks to KCC for producing this original interpretation of the South African modern classic. 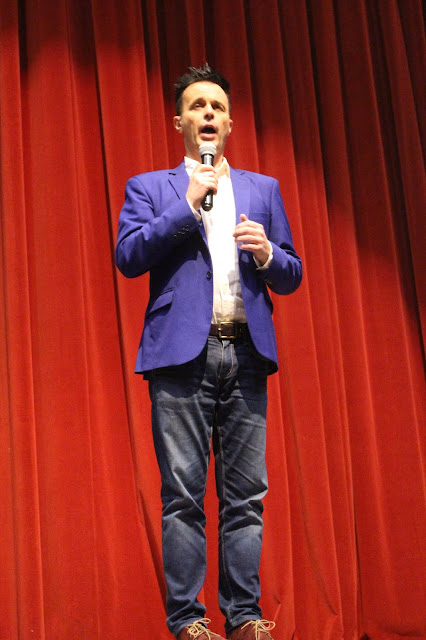