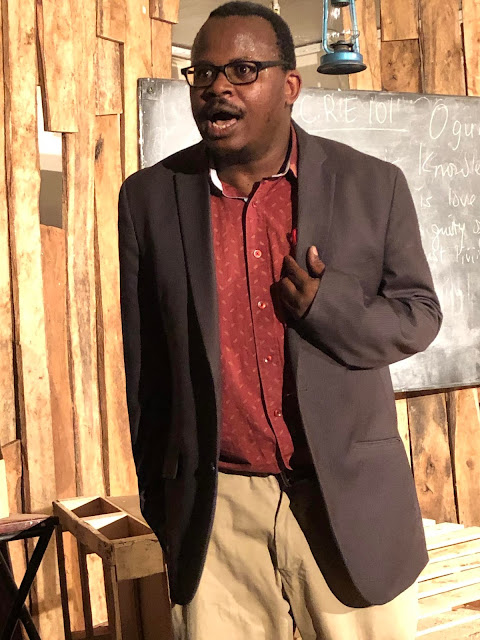 Dr Fred Mbogo morphed magnificently into any one of several crazed men in ‘A Revolution Ate my Son’, the script that he wrote and staged last weekend at Kenya Cultural Centre’s Cheche Gallery under Esther Kamba’s direction.
I am not really the right person to appraise his performance since I was unable to see the whole of his sterling one-man show.
Nonetheless, in the final third of the play which I managed to see I witnessed the insidious influence of that genre of drama known as the ‘theatre of the absurd’ on the playwright-actor who is also a university lecturer in the theatre arts. It was apparent in Mbogo’s showcasing of the insanity of contemporary African history.
As I walked into the show, he had taken on a sort of clownish, carnivalesque persona of a traumatized man living in an ostensibly fictitious country.  Karumba was his name and he was telling the crazy story of how he had been grabbed, tortured and mistaken for one of the rebels following a failed coup attempt on the State.

Eventually the man flees the country and arrives in the land where the streets are supposedly paved with gold, the USA. But Karumba’s life in exile isn’t pretty or purposeful, apart from his making money doing menial labor, drinking a lot and having sex with heaps of white women. 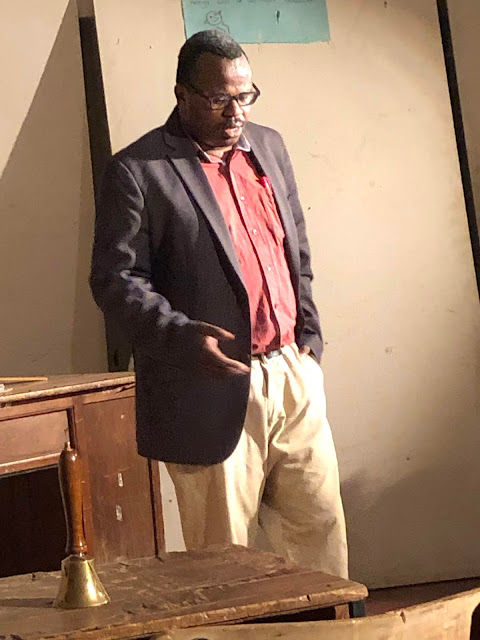 His womanizing stops abruptly after meeting one vindictive woman who’d gotten fed up with her abusive spouse. Having chopped off her man’s head, she proudly shows it like a trophy to Karumba who quickly flees for his life and decides to head back home after many years away.
What had actually led Karumba to flee his country in the first place was fear. He had seen the senseless shooting of the harmless old man, Baba Ogumu and realized he could easily be next since he’d already been senselessly grabbed once.
The Baba’s only ‘crime’ was asking questions. Maddened by his inability to find his son, he roamed the streets asking if anyone knew where he could find his son. In fact, Baba Ogumu is the one who, if he’d been lucid, would have spouted the story’s title, ‘A Revolution Ate my Son.’ For Ogumu had actually been part of the so-called ‘second liberation’ struggle aimed at overthrowing the wicked head of state.
Karumba is no hero despite being qualified to be called an ‘exile’. Once he returns home, he is accurately perceived by many members of the struggle as a traitor who deserves no adulation for having sought refuge and ‘the good life’ overseas. 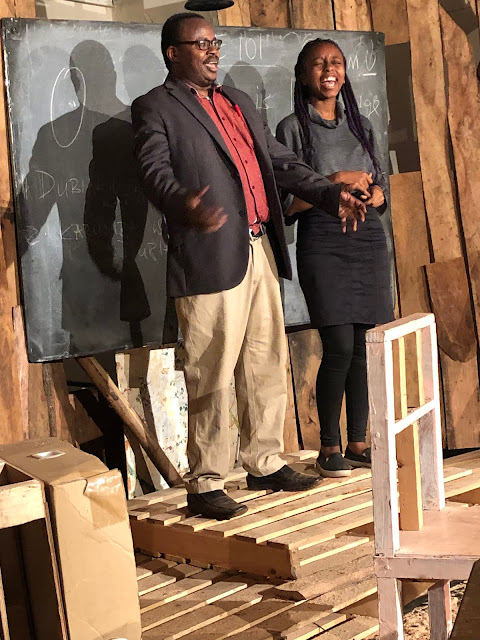 But Karumba still hopes to reunite with the fiancée he had left behind. That doesn’t happen. Thus, what we are left with is a cynical portrait of a coward whose life in exile served no purpose despite the mythologies that revolve around those who flee into exile supposedly to save their lives and to eventually fight another day.
Mbogo’s cynical portrait of an exile was challenged during a question and answer session following the final night of the play. One audience member asked him why he had portrayed such a serious topic in such a comical way. Mbogo didn’t quite give a clear answer except to say it was the style he’d chosen.
In fact, he explained that his script was modeled after a novel by Mukoma wa Ngugi entitled ‘Mrs Shaw’. Mukoma was meant to arrive in Kenya for an ‘Artistic Encounters’ session at the Goethe Institute to be interviewed by Mbogo and Zuki Wanner. However, that program had been scuttled when Mukoma, a lecturer in Literature at Columbia University in the US, was not able to come to Kenya as planned.
“So I decided, since I had prepared myself for that interview, to make something out of Mukoma’s story,” says the playwright who has written more than fifty plays since secondary school. 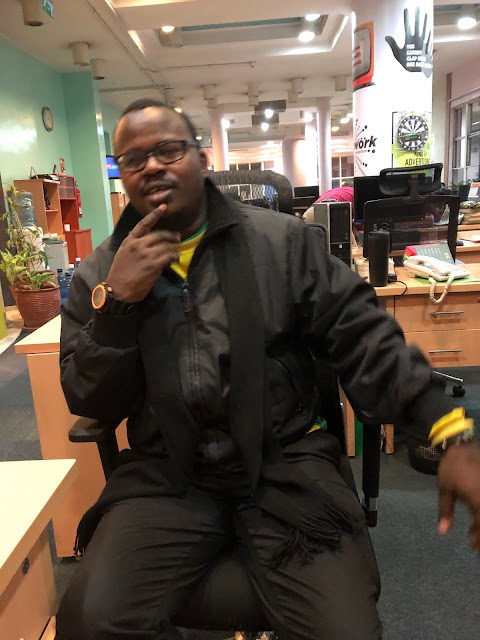 It is unavoidable to note that the novelist Mukoma is himself the son of an exile. Ngugi wa Thiong’o has often been faulted for living in exile while Kenya’s problems remain and the ‘revolution’ has yet to be won.
But Mbogo is the first to dispel any notion that Mukoma was writing about his father. There are mixed opinions about the author’s intentions, but since Mukoma never showed, the speculation will continue. The cynicism left untamed. 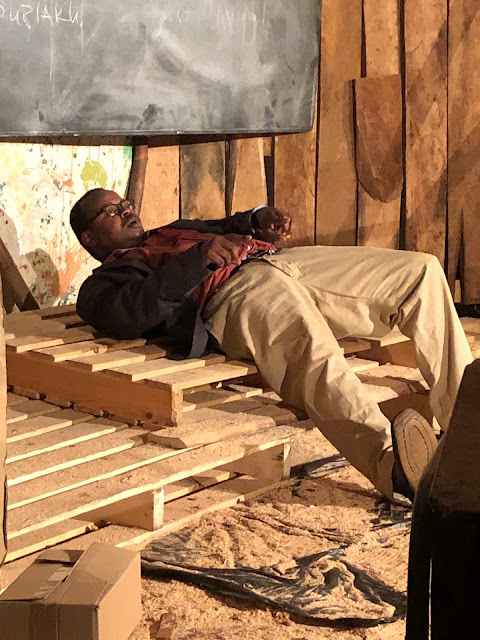 Posted by Margaretta wa Gacheru at 02:16