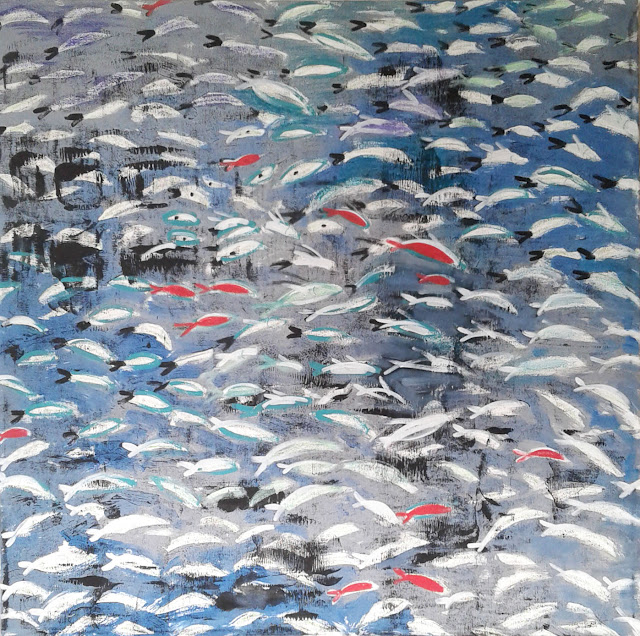 Shilpi Deb is a whimsical artist whose current exhibition at the Talisman Restaurant reveals the autobiographical nature of her painting.
At 24, Shilpi followed in the footsteps of her grandfather, father and brother to attend the JJ School of Art in Bombay where she perfected her talent for painting. She’s the first in the family to pursue fine art however, since the patriarch became an architect while his son, her dad became a graphic designer who has served as her most consistent and constructive critic and her brother went into advertising.
Intuitive, sensitive and moody are all terms that can apply to the feelings that affect and inspire most of the art in her current show which she simply entitles ‘Solo’. The simplicity of her expressive work has an instantaneous appeal as for instance, the day it rained and she found herself walking in it. That experience translated into a painting full of walking feet and drops meant to be ‘rain’, which is also the title of the piece.
Her morning wake-up call registers as a work that contains a blanket and stretched-out arms emerging out from under the bed-cover. It’s meant to convey nothing more than the significance of the moment when she’s having a vigorous morning yawn and expansive stretch. Nothing complex or profound, but it’s an experience that everyone can identify with.
Then there’s her moody moment of anger which translates into a face having a ferocious look. But then there’s also her one day in the sun when she’s seated with a girlfriend, having fun as each girl shades her eyes from the hot equatorial glare.
One of Shilpi’s most striking pieces is one that greets you as you enter the Talisman. It’s a semi-abstract work which has a shapely tree-like plant surrounded by fish swarming in and out of its branches. The background is a translucent mix of reds, white and browns, but no blues. It’s a lovely piece. But just beside it are four miniature paintings that confirm that this show is autobiographical. All are pictorial translations of her moods, the most illustrative one being of a half-headed girl gazing out at you with three eyes and mushrooms sprouting out of her head.
“That day, I felt as if my head was filled with mushrooms growing out of it,” concedes Shilpi.
It’s a frenzied feeling that apparently flashed through her head occasionally since she returned from Bombay and found herself within Nairobi’s bustling city-life. It’s a feeling she still gets sometimes and which she finds unsettling.
It was during those early days of her homecoming that she painted a series on one of her favorite female characters. “Ma kali is the Hindu goddess of destruction but I’m inspired by her strength,” she says.
Shilpi has managed to cope with that mental unrest with a form of meditation which she calls ‘riyaaz’. “It’s a difficult term to translate into English [from Hindi],” she says. But it seems to be a sort of daily discipline involving meditation and any form of exercise that is meaningful and gets fulfilled on a routine basis.
“For my dad [the artist], riyaaz involves his sketching for some minutes every morning. For my mom [a mathematician], it’s taking time every night to read a book for an hour or two,” she adds.
And for herself, riyaaz involves painting every day, which is one reason why her works are so prolific.
“My father says I need to slow down and take more time with my paintings, but for now, this is how I work,” she says.
Shilpi’s art will be at the Talisman until 6th October.

Posted by Margaretta wa Gacheru at 11:01