KENYA ART FARE 2016 A SUCCESS AGAINST ALL ODDS 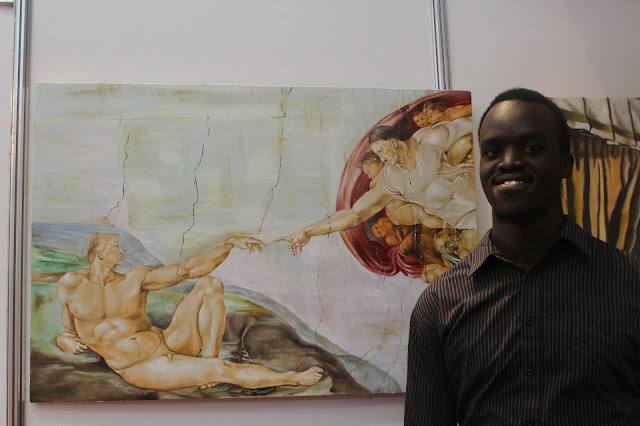 Clavers Odhiambo with his Michelangelo-like painting "The Chosen One' but in place of God and man, he painted Hitler & Trump. All photos by Margaretta

Making the best of a sad situation, the Kenya Art Fair went forward this past weekend irrespective of the shadow that is currently still being cast over the original organizing body of the fair, Kuona Trust.


Planning for the Art Fair began many months before the Trust’s Board of Trustees closed Kuona offices in order to have an official audit conducted, since big money (an incalculable amount running into the multiple millions) had gone missing and the Board as well as some donors wanted to get to the bottom of tragic quagmire that has left Kuona artists in limbo and friends of Kuona confused. ‘How could this have happened?’ 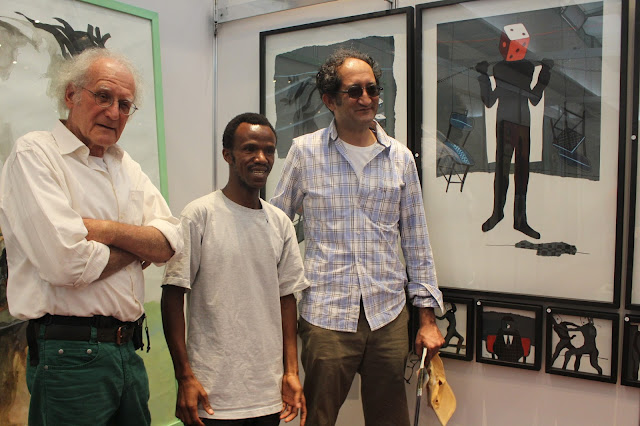 
But Kuona artists are strong and smart so they not only conducted a successful fundraiser, Kuona Reloaded, this past week (which is still ongoing although discounts are less than previousy). They also sustained the Kenya Art Fair with support from The Sarit Centre and the Textbook Centre as well as the German Embassy, Goethe Institute, Safaricom, and Uber among others. 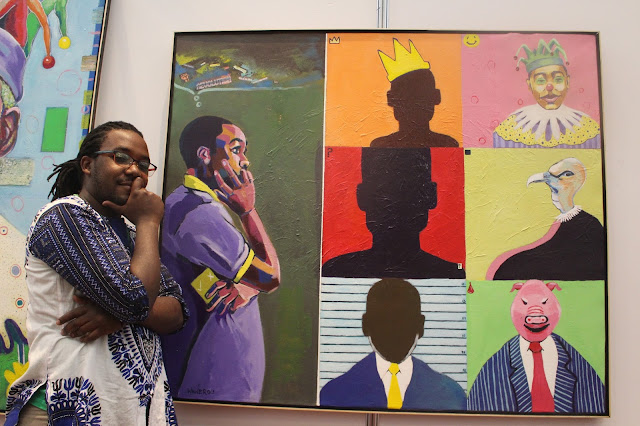 Waweru Gichuhi with his painting at the Brush tu Art booth. His painting captured the public imagination and many took photos of the guy looking contemplative, like Waweru


What’s more, both Kenyan and Ugandan art centres came out in full force this year. There were more than 20 that rented space, signaling just how vibrant and resilient an art scene we have in Kenya. The hub of it is of course in Nairobi; but galleries from the Coast (Diani Beach) and Kisumu (The Little Gallery) as well as Kampala (Fek Fek, Njovu, Karibu and Umoja) were also represented. 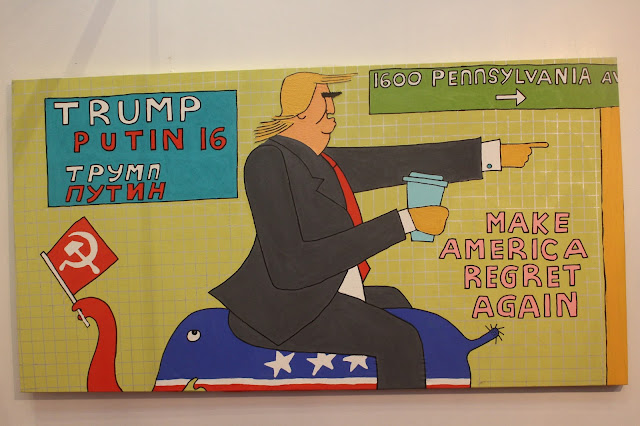 My favorite painting at the Kenya Art Fair was by Michael Soi: Make America Regret (not Great) Again, a parody of the Trump slogan and a perfect image of the backward thinking President-elect


There were also many independent, unaffiliated artists represented at the Fair, a number of whom were newcomers who exhibited under the Wasanii (aka Kuona) umbrella, such as Philip Micah, Thibite Kamau, Brian Mandere and Lucinda Ochieng among others. 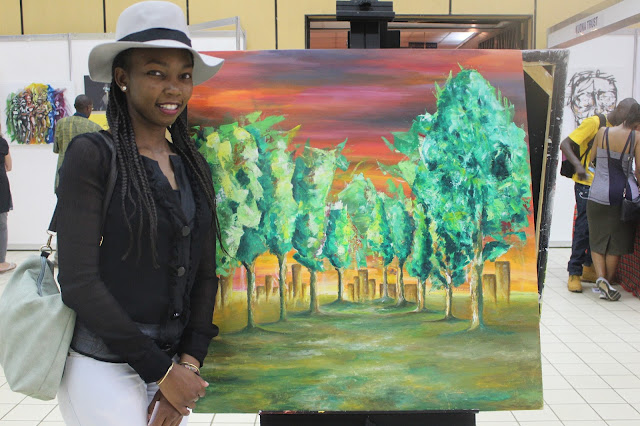 Newcomer to the Kenya Art Fair, Lucinda Ochieng exhibited in the Wasanii Hall at Sarit Centre
In addition, there were more than a dozen individual artists that had rented booths of their own. Among them were Patrick Kinuthia, Cyrus Kabiru, Geraldine Robarts, Kamal Shah, and Michael Soi (aka The Bag Factory), the latter two coming up ‘tied’ in a public contest held in the last hours of the Fair in which both of their booths were ‘runners up’ behind the ‘winning booth’ based on votes that elected Brush Tu Art Studio, the five-man space based in Buru Buru.

Some cynics suggested that Brush Tu had an advantage since the five artists, namely Boniface Maina, David Thuku, Michael Musyoka, Waweru Gachuhi and Elias Mungora, were able to enlist all their friends in voting; but I for one agree with the public that voted and gave the winning prize to Brush Tu Art. 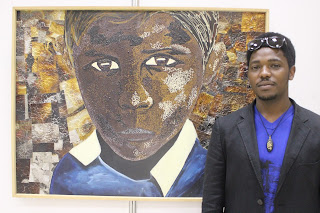 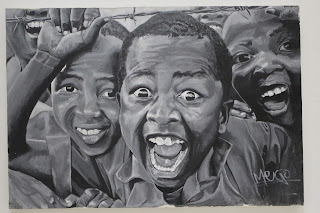 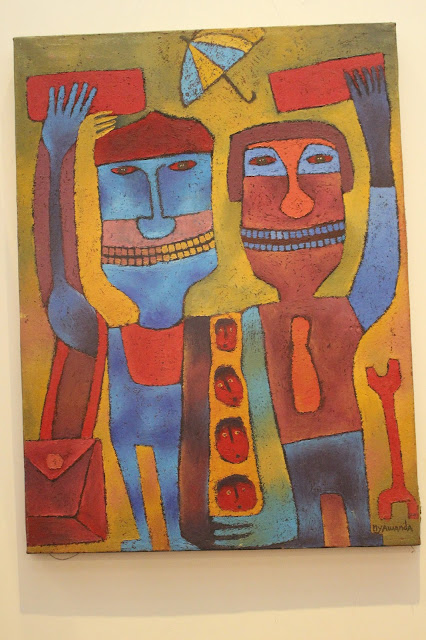 The other competition established well before Kuona’s financial queries arose was for the best Graffiti art. That award went to the trio of artists calling themselves BSQ, the acronym for Bebeto Ochieng, Eric ‘Stickky’ Muriithi and Kennedy Ochieng with the runner-up being Elija ‘Eljay’ Mutua.

In fact, the Art Fair got mixed reviews this year. Some felt the ‘shadow’ of Kuona’s yet- to-be unraveled financial mess led some of Kenya’s best visual artists to stay away, and that could be true.


But our local art world is dynamic and ever-changing with young artists emerging on the scene regularly. So that while a gallery like One Off was conspicuous for its absence (meaning more than a dozen of Kenya’s top-drawer artists were invisible this year), nonetheless, art centres like Dust Depo, Wajukuu Art Project, Railway Gallery and Wasanii all presented artworks by young artists who are coming up fast. They include painters like Lee Gitahi, Kibet Kirui and Soloman Luvai.Moses
The other factor that effectively countered complaints that this, the 3rd Kenya Art Fair was weaker than in years past, was in the positive impact that artists from around the region had, such as Baharaddin Mohammed and Magdi Adam from Sudan and Jjuuko Hoods, Jude Kasagga, and Saad Lukwago from Uganda as well as Elaine Kehew from the US whose installation inspired by a recent incident of violence against a young university student elicited much discussion from slightly diminished numbers who attended the Fair this year. 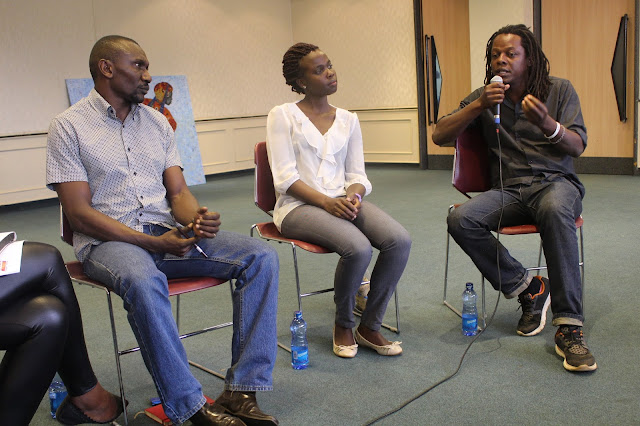 
Meanwhile, no less than eight solo exhibitions – and two group shows -- are up and running right now in Nairobi. They include works by Jim Chuchu (The Bones Remember) at Goethe Institute, Collins Sekajugo at The Art Space, Magdi Adam at British Institute of East Africa, Timothy Brooke at One Off Gallery, Anne Mwiti at Polka dot Gallery, Boniface Mwangi at Alliance Francaise, Richard Njogu with Cleophas Ondula at Fundii Centre for the Arts and Begona Lund at The Hub’s Gallery in Karen. Plus, Kuona Reloaded continues as does Red Hill’s Woodcut Prints Exhibition.

Posted by Margaretta wa Gacheru at 03:52