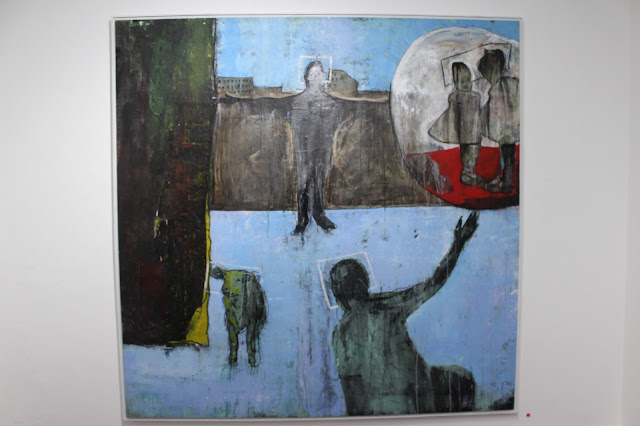 Tracing their lineage and then translating it into art is the tack taken by two East African artists who both happen to be exhibiting in Nairobi currently.


Dickson Kaloki’s interpretation of his research, entitled ‘Changing Rooms’, takes shape in an installation including a mysterious box surrounded by colorful semi-abstract paintings at Kuona Trust.


Meanwhile, the Tanzanian artist Rehema Chachage’s visual translation of her research, entitled ‘Mlango wa Navushiku’ (at Circle Art through April 18), also takes the form of an installation, only hers includes video, still photography, a bathtub and a digital art light show.


Both exhibitions are conceptual in that each addresses the issue of the artist’s identity. Each show includes concepts associated with cultural practices of their respective communities. They also examine the implications and applications that those traditional beliefs and practices may have in the present-day.


The amazing commonality between Kaloki and Rehema relates to their both arriving at a stage in their lives when ‘identity’ became a powerful concern to investigate in depth. The ‘who am I?’ moment apparently hit them around the same time.


What’s also remarkable is that both chose a similar strategy for seeking out solutions to their identity issues. Both went looking for their grandmothers, each of whom was clearly a masterful storyteller who happily imparted her knowledge and experience to her inquisitive grandchildren.


Both artists saw their elders as respected repositories of wisdom and indigenous knowledge. Moreover, that knowledge could easily have been lost without curious characters like Kaloki and Rehema recognizing their elders as inspirational and informative storytellers.


So even before appraising the aesthetic value of their creative expression, both artists deserve commendation for looking within (not outside) their respective cultures for inspiration and primary source material. It’s in contrast to a number of other artists who are less keen on authenticity and more convinced that Western art trends and traditions are superior to their own.


One difference between the artists is that while both interview their grandma’s in her mother tongue, Rehema’s mum translated the text into English while Kaloki invited a friend to translate KiKamba into English.


The other big difference between the two shows (apart from the difference in artistic media and genre) is that Rehema is specifically interrogating traditional practices and beliefs that historically have impacted the lives of women.


Kaloki more generally explores the way cultural concepts repeat themselves down the generations and shape the way people see. It’s an idea he conceived as a box encompassing the head of every being portrayed in his art.


Ultimately, it’s the grandmothers who are the stars of these shows which are extraordinarily similar yet distinctly unique.


Meanwhile, the other artistic genre that’s implicitly infused with meaning is the cartoon. But in contrast to conceptual art, cartoons are created specifically to be visually clear, direct and palatable to the general public. They’re often spiced with sassy satire and salty humor.


That’s why the Swedish Institute chose to team up with cartoonists following the 2009 Copenhagen Conference on Climate Change to rouse public awareness of this manmade phenomena and the consequences of ignoring this global problem.


Between ’09 and 2016, more than 115 cartoonists from five countries joined the ‘Facing the Climate’ collection and campaign.


Since yesterday, ‘Facing the Climate’ cartoons went on exhibition at Alliance Francaise featuring Kenyan cartoonists Gado, Madd, Celeste and Victor Ndula together with others from Sweden, Tanzania and Ethiopia.


The exhibition’s been produced by the Swedish Embassy and Buni Media, and curated by Victor Ndula and Magnus Bard.


Posted by Margaretta wa Gacheru at 06:20