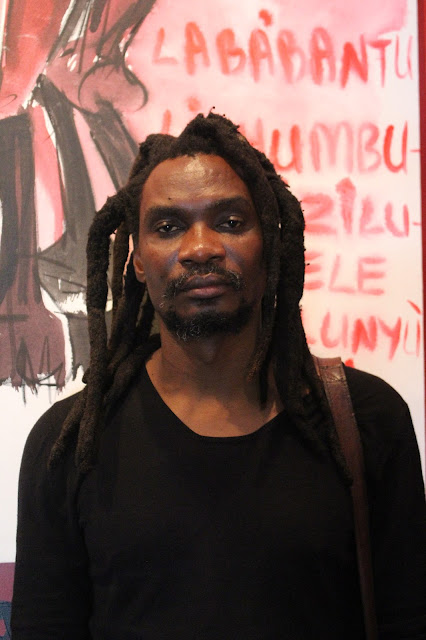 Owen Maseko at opening of his Sibathontisele exhibition at Goethe Institute


Owen Maseko was only eight years old when forces representing the newly independent Zimbabwean government came to his home area of Matabeleland and inflicted torture, murder and mayhem on the men, women, children and even babies believed to be opponents of President Robert Mugabe.


Yet despite more than 30 years having passed, memories of those traumatic times, known as the Gukurahundi Massacres are still fresh in many people’s minds. 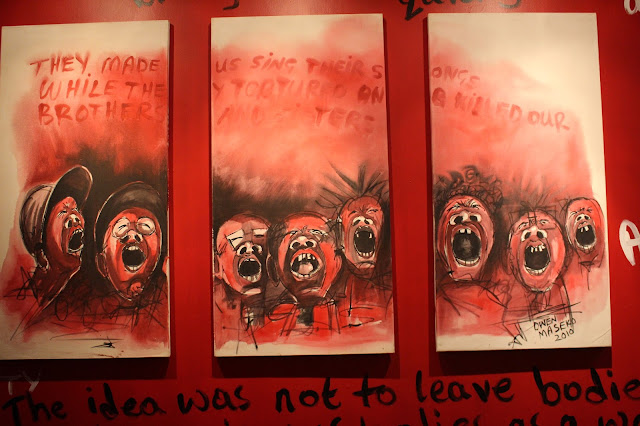 What’s more, they’ve filled a full installation by Maseko complete with black and blood-red canvases, life-size sculptures of torture victims and Gukurahundi-defining graffiti, all of which retell a story the Mugabe regime would just as soon forget.


So emphatically does the regime want to erase from memory that which Mugabe once called “a moment of madness” (which lasted from 1983-1987) that it banned Maseko’s 2010 ‘Sibathontisle’ exhibition from ever seeing the light of a full day.


The show actually opened at the Bulaweyo National Art Gallery for less than 24 hours after which the artist was charged with various offenses that could’ve got him jailed for up to 20 years.


Fortunately, he worked with Zimbabwe Lawyers for Human Rights and was only detained a week. But his exhibition was locked up until 2015 and permanently banned from ever being shown in the country.


It’s Maseko’s Sibathontisele show that was opened last Tuesday night at Goethe Institute and which will be up in GI’s auditorium until May 5th.


“We’re grateful to Goethe for opening up its space to Owen’s exhibition,” says Joost Fontaine, Director of the British Institute of East Africa (BIEA) who’d initially been contacted by Maseko.


“Ever since Owen’s art was released [It had been inaccessible to him for five whole years], he’s wanted to exhibit it outside Zimbabwe since the Gukurahundi Massacres are little known,” adds Dr Fontaine, an anthropologist who’d done extensive research in Zimbabwe before joining BIEA, which is why Maseko reached out to him.


“Thirty-four years may seem like a long time,” says Maseko. “But our people are still traumatized after tens of thousands of Ndebele people were tortured and slaughtered.”


That emotional duress comes across powerfully in his exhibition which fills the whole of Goethe’s auditorium where all the walls are drenched in blood-red paint. They’re also covered in black graffiti wherever the walls are not hung with giant red and black canvases that reveal instances of horror, torture and cruelty inflicted by the Zimbabwean Army’s notorious 5th Brigade on ordinary peasants.


Owen explains the 5th Brigade was especially trained in torture techniques in North Korea. The tactics included everything from hanging people by their feet and then kicking them in their heads to burning homes with owners inside and rounding up school children, then leaving them to scorch in the hot lethal sun.


Owen adds the soldiers only stopped the slaughter after Ndebele leader, the late Joshua Nkomo, agreed to sign a ‘peace accord’ which the artist portrays both on canvas and with one of his three sculptural installations in which Nkomo (who’s also drenched in bright red paint) is seated signing the so-called peace accord.


Owen’s days of designing and exhibiting political art in Zimbabwe seem to be over for now. He remains based in Bulawayo, making music and shaping ceramics to make ends meet. But he hopes to share his Sibathonisele show with a wider public beyond his homeland so the world won’t forget the unforgivable pain inflicted on the Ndebele people by the Mugabe regime.


Posted by Margaretta wa Gacheru at 05:26