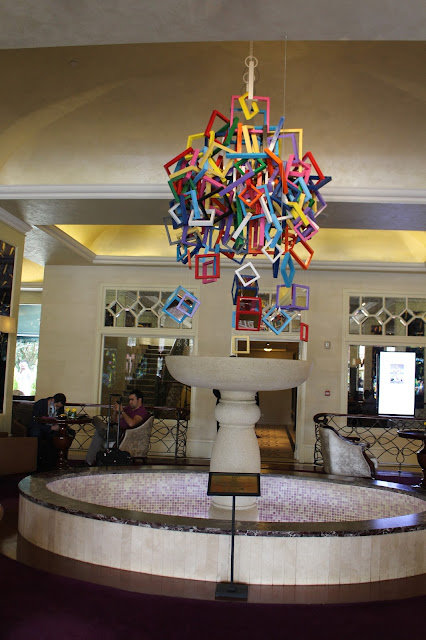 David Thuku wasn’t the only Kenyan artist creating sketches and a three-dimensional model for consideration by the Villa Rosa Kempinski Hotel which was getting set to celebrate its 120th anniversary since the founding father of the luxury hotels, Berthold Kempinski, opened the first family business back in Berlin, Germany in 1897.


But Thuku was the only artist to come up with a design that was both contemporary and conceptually intriguing as well as being colorful and compatible with the elegant front foyer and lobby of the Hotel. 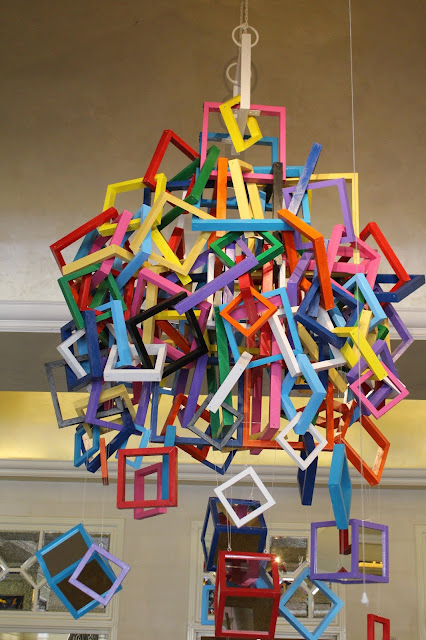 On the one hand, Thuku’s chandelier-like collection of multi-colored square frames might be mistaken for a playful children’s toy since nearly all the 120 frames are interconnected like a child’s game. But at the same time, this intricate assortment of color-coded geometric forms are carefully hung from the Hotel’s high ceiling so that they seem to be cascading down towards the classical marble fountain situated as the very center of the foyer.


Thuku calls his hanging installation ‘Cycles of Light’ which is a title and concept inspired by the Hotel’s anniversary theme, namely ‘Ignite the Night.’ “It’s a theme shared among all 74 Kempinski Hotels, all of which commissioned artwork from a local artist,” says Shikha Nayar, the Nairobi Kempinski’s E-Commerce Manager. She adds that most of the 74 are located in major European cities although a number of newer hotels have come up in Southeast Asia and the Middle East. Ironically, she says Kempinski has no hotels on the North American mainland, although they are just about to open one in Havana Cuba! 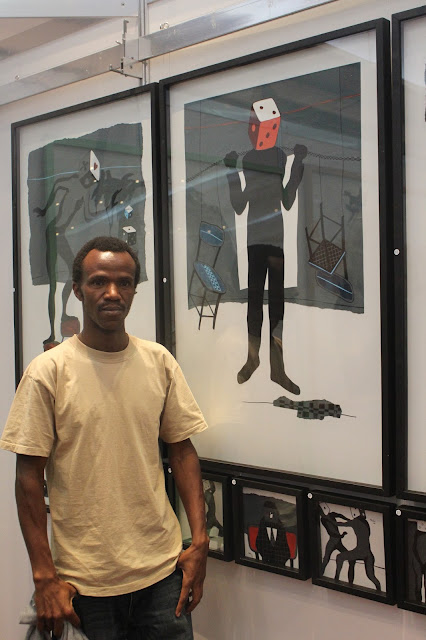 As for Africa, the Villa Rosa Kempinski, launched in 2014, is not the first established in the region. “We have two in Kenya, one in Nairobi, the other in Maasai Mara,” says Shikha. “But we also have hotels in Cairo, Kinshasa, Djibouti and Accra.”


On April 8th at exactly 6:30pm all 74 Kempinski Hotels turned on lights meant symbolically to ‘Ignite the Night’ and illuminate all the artworks created especially for the 120th anniversary celebration. 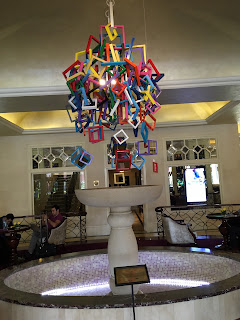 “At the same time, the [Nairobi] Hotel switched on the fountain beneath the ‘cycles of light’ which had a dazzling effect,” recalls Thuku who had carefully hung four six-sided mirror cubes at the base of his ‘chandelier’.


“The effect of the flowing fountain water combined with the four ceiling lights that were simultaneously switched on was something special to see,” adds the artist who says he had help on various details from friends his home studio at Brush tu Art.

(The section below didn't appear in the paper but the rich details that Thuku shared were worth remembering:)

Describing his installation as a collaborative piece, Thuku says he worked with Kempinski technicians who helped him especially with the lighting above the piece. "all four lights were on either side of the piece," he says.

Explains that the spray-painted squares were all made out of wood, three corners of which he used screws and super glue to assemble, Thuku adds that in order to interconnect each piece he'd left that last side open until it was time for the final assemblage of the art.

Having used 12 colors (which meant he painted 10 sets of colored frames), he says he used black and white as well as three shades of blue, two shades of green, two shades of yellow and one of purple, red and pink.

"what I realized after I had decided to use the 12 colors was that the ten sets could symbolize the decades," he adds.

"I also created six different sizes of squares so as to signify growth and development of the enterprise," the artist noted.

But the final challenge for him was figuring out how he was going to install his installation. But with the help of friends Abdul and Lincoln at Brush tu Art, he was able to create metallic rings and a strong set of chains that enabled him to have his sculpture be effectively suspended.

"We were able to suspend it from the ceiling but we ultimately had to wind the metal chain around a sturdy metal pipe that was above the ceiling. that way the whole structure was secure."

Posted by Margaretta wa Gacheru at 11:16