WAJUKUU ARTISTS: FROM THE SLUM TO THE SUMMIT 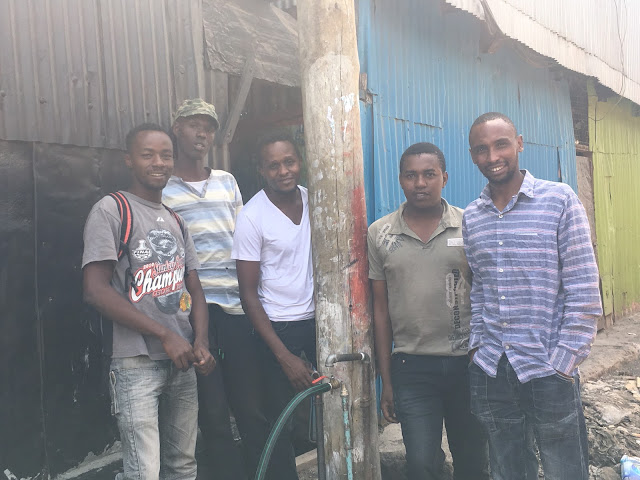 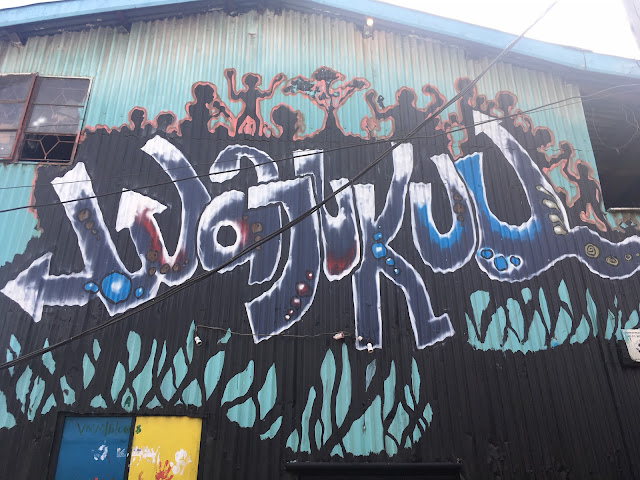 Wajukuu Art Project got its name from the Swahili proverb, “Majuto ni mjukuu huja baadae”. It loosely translates: The grandchild suffers from the mistakes or regrets made by his forefathers.
“For instance, if a grandfather sells off the family land, he’ll leave his grandchildren poor and landless,” explains Josephat Kimathi, a long-standing member of Wajukuu Art who was introduced to the project as a child.

“I learned to paint when I joined Wajukuu’s Kids Art Club,” he says. 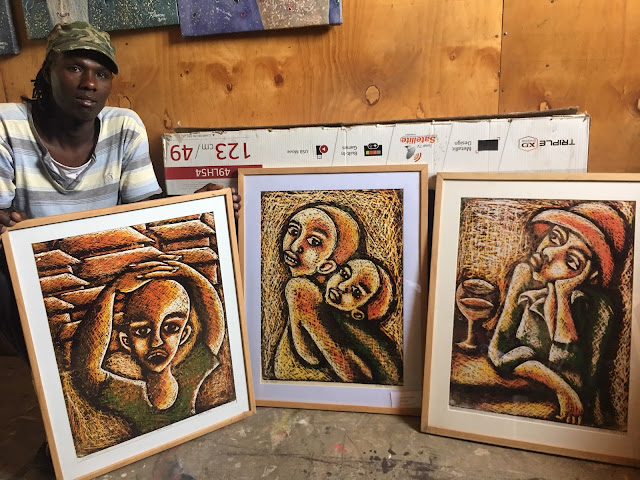 The kids club is still running on weekends and school holidays. Only now Kimathi (aka Kim) is one of the art teachers.
“The kids come from all over Mukuru [slum] and most of them are around six years old,” says Lazarus Tumbuti who’s been with Wajukuu since it started in 2004.
“We started it with Shabu [Mwangi] soon after we’d both finished training at MAC [Makuru Arts and Crafts],” says Lazarus who is one of several Wajukuu members who had the benefit of studying art at MAC, a two year art program started by an Irish Catholic nun, Sister Mary, in 2002.
Wajukuu was officially registered in 2007. But by then, not only the kids’ art club had taken off. Aspiring artists like Ngugi Waweru, Joseph (Weche) Waweru and Paul (Pablo) Njoroge had also joined. The project had equally inspired a number of more-established Kenyan artists to run training workshops at Kuona Trust and GoDown for Wajukuu’s emerging artists. 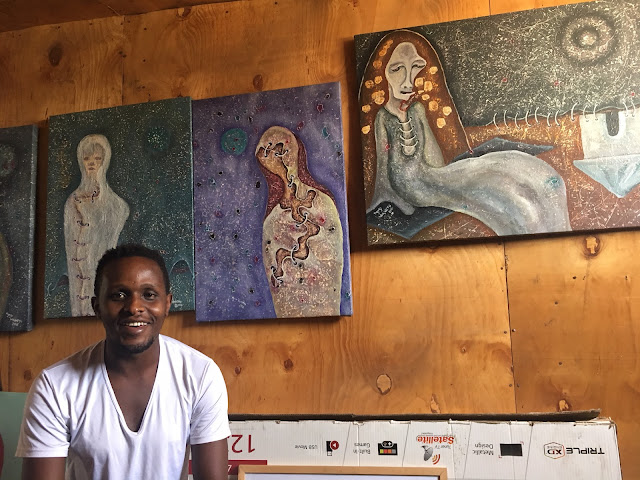 They included Peterson Kamwathi and John Silver, both of whom shared their skills in printmaking. The fruits of that training are clearly manifest in the prints that Wajukuu artists have tucked away upstairs in their Lunga Lunga Road studio.
“We don’t have a printing press per se,” says Ngugi. “Instead we make blocks [covered in plastic] and use them to press by hand.”
It looks like a long and laborious process. But what Wajukuu printmakers like Ngugi, Waweru, Lazarus, Pablo and Sammy Mutinda produce are impressive prints that will hopefully be on display in public quite soon. 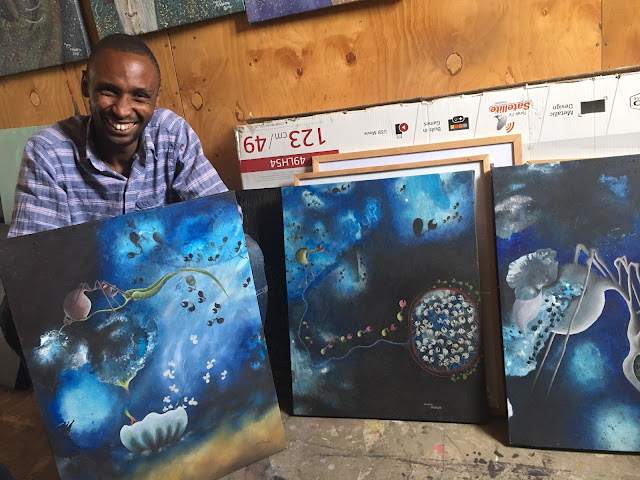 The crew also paint, with their works most recently shown this past year at Kuona Trust and in Circle Art’s ‘Young Guns’ exhibition. Meanwhile, Shabu’s art continues to evolve while he’s in New Orleans attending an art residency.
But the best place to see the newest works by Wajukuu artists is at their upstairs studio. For instance, works included in Waweru’s ‘ant series’ are lovely, but they also conceal cryptic socio-political and personal commentaries on the realities of poor people’s lives. 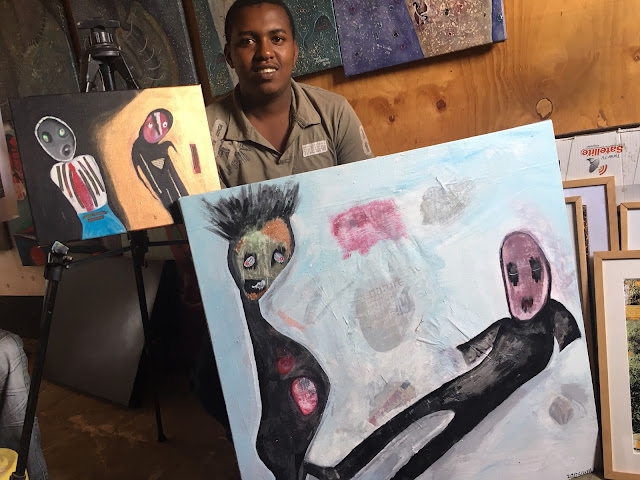 In fact, nearly all the artists at Wajukuu were born and raised in Mukuru. “Most of us are sons of single mothers who couldn’t afford to send us to secondary. So we were fortunate to find ourselves learning to be artists,” says Lazarus who notes that MAC was free, and so is membership in Wajukuu.
“But when one of us sells a painting, he contributes ten percent to [the collective kitty],” Waweru says. “And if a [sold] artwork was made with materials provided by Wajukuu, the artist contributes 20 percent of his sales,” he adds.
Initially, Wajukuu was helped both with training and obtaining art materials from fellow artists like Patrick Mukabi, Kaafiri Kariuki, Anthony Wanjau, Mary Ogembo and Wambui Collymore.
ISK also collaborated with Wajukuu artists after art teacher Liza MacKay met Shabu. Parents from ISK even raised funds to help construct Wajukuu’s facilities.
Waweru adds their project has been assisted by many more generous supporters. But most notably, it was the Italian NGO, Movement for International Cooperation (MOCI) that also helped construct their double-decker centre.
“MOCI was impressed with our kids’ art program so they invited us to do art therapy with handicapped children at their vocational training centre in Makueni,” adds Ngugi.
They helped build a library in an adjacent building. “We also helped us buy land so we now own the art centre and library next door,” adds Waweru.
Wajukuu artists have exhibited in various art centres in Nairobi. But right now, the best place to see the rich treasure trove of Wajukuu artists’ work is at their Lunga Lunga studio.
You might need help finding the place, but the city block on which the studio resides is conspicuous for the colorful mabati and wooden wall murals painted on people’s makeshift shops. Plus there’s a huge Graffiti sign reading ‘Wajukuu’ painted outside the centre’s second story window.
‘Wajukuu really belongs to the whole neighborhood,” Ngugi concludes.


Like so many Kenyan visual artists, Shabu Mwangi has an amazing story to tell. It’s a story well told through his paintings currently up at One Off Gallery.
Covering everything from his views on international (Evolve Observer) and local politics (Acceptance and Abreast) to more intimate and autobiographical accounts of his family (Family Post mortem and My dream), his former life as a ‘bad boy’ and righteous rebel (Black Moon) and his realisation that he had a higher calling (My shadow) which now inspires him to assist children, the disabled and aspiring young artists through teaching them art.
The challenge of fully appreciating Mwangi’s paintings has to do with his consistent use of subtle symbolism which is not easily deciphered.
Metaphors
He describes his symbols as ‘metaphors’ which make loads of sense once the artist shares his interpretation of his work, something that he graciously did for me during the first days of his show at One Off, his second solo exhibition there and his third overall with the first one held at Le Rustique in 2012.
Having lived most of his 29 years in Mukuru ‘slum’ in Nairobi, Mwangi has had the good fortune of doing art in school from the time he was in pre-primary.
He learnt the skills of print - and mosaic-making while attending the Rubin Centre in Eastlands where he discovered early that an artist didn’t necessarily need costly materials to be creative. He made mosaics with raw maize, beans and glue, and created prints using banana stalks and leaves.
Drop out
But as much as he learned early that he had a knack for the arts, Mwangi was rebellious, having unmentionable troubles at home which led to him to drop out of school. Getting an education on the streets of Nairobi, he eventually made his way to the Matrix Education Centre in Buru Buru where he was able to study on his own, take the necessary exams and complete his ‘O’ levels with good marks.
At 17, he had the good fortune of meeting Kaafiri Kariuki at the Mukuru Art Centre together with a number of aspiring young artists. It was an encounter that shaped the rest of his career since Kaafiri (who founded MAC) saw Mwangi’s potential and gave him a job working in the Centre’s gallery and shop that sold the students’ art.
“But once we’d graduated from the Centre [in 2004] we didn’t have anywhere to go,” recalled Mwangi who decided there and then to start his own Wajuku Project where he and other MAC artists would explore ways of making and marketing their art.
That’s also when his work of teaching art to Mukuru’s children began, work that he’s continued in his Kids Club every weekend since.
ISK art club
Wajuku Project opened up many opportunities for Mwangi. He began working with art students at the International School of Kenya, which led to the Project mounting an exhibition to fundraise for its own centre and workshop.
The funds raised were more than matched with ISK art club’s contribution to building Wajuku’s mabati-walled art centre and studio.
Then in 2010, Mwangi’s work with slum children attracted the interest of an Italian NGO, MOCI or Movement for International Co-operation.
Wajuku
“Through MOCI we’re also teaching art to disabled youth in Makueni. The group also helped us build a second structure for the Kids Club,” adds Mwangi who noted that the new building not only has space for teaching the children but also has an art gallery and library which will be officially launched on June 16 by Carine Ouvry, wife of the Belgian Ambassador, who has helped fill Wajuku’s shelves with art books and books on many other subjects.
Fortunately, running the Wajuku Project isn’t all Mwangi does.
His painting style has evolved significantly since his first one-man show at Le Rustique. He uses far more colour in his work now than he did previously; but he continues to tell sensitive (albeit cryptic) stories through his art.
Most of his work at One Off is mixed media on canvas, although two of his paintings are on the burnt mabati he salvaged from the 2012 Sinai fire that devastated a whole section of the Mukuru slums.
One hallmark of Mwangi’s art is his sensitivity to the plight of the poor, the disabled, the abused and discriminated against, including the Somali population which he feels have been unfairly stereotyped.
Mwangi did an art residency in Germany in 2012 which enabled him to travel all over Europe. But he never intended to stay abroad.
“My home is Mukuru and that’s where it’s always been and always will be.”
Shabu Mwangi’s paintings will be up at One Off Gallery up to June 24th.


Posted by Margaretta wa Gacheru at 09:56