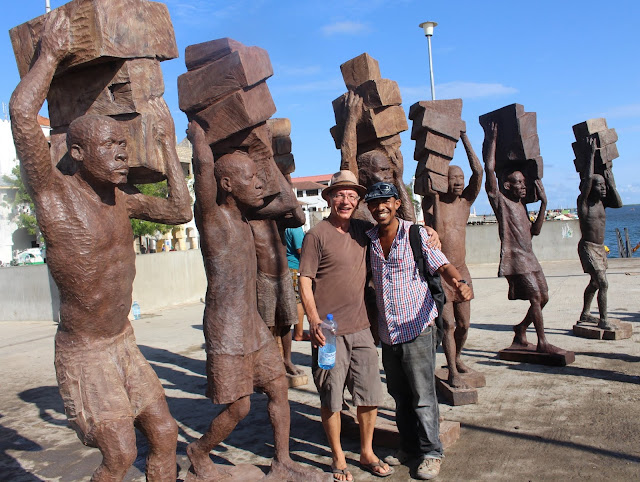 Joachim Sauter, sculptor of the 8 Maweni Carriers in transit to Lamu Fort from artist's studio@Shela village

This year’s Lamu Arts Festival had a myriad of artistic attractions. Running from 1-4 February, the four day festival, which was technically the third. But actually, Lamu has been holding international arts fetes since 2011 when the first Lamu Painters Festival was held and painters came from both Europe and Kenya.
This year’s festival was endorsed by the county Ministry of Tourism and Culture but coordinated by Rachel Feiler of Diamond Beach resort and Herbert Menzer who’s the patron of the arts festivals since 2011. Rachel ensures that there was music by Orchestra Les Mangelepa which performed to massive crowds in Lamu Town Square and at the Diamond Beach. 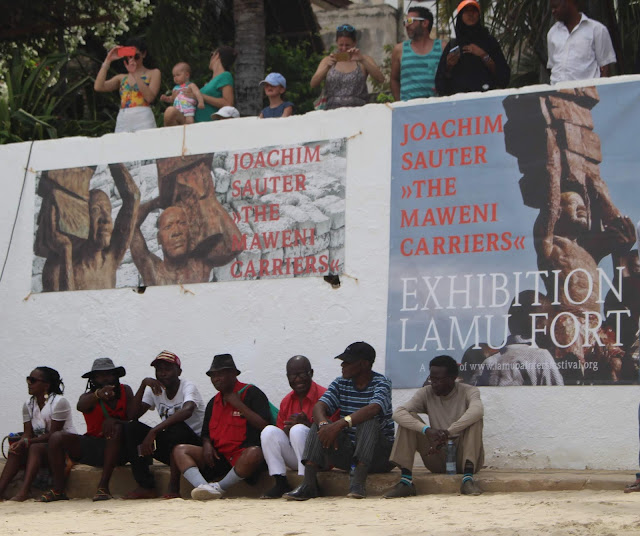 Meanwhile, there were visual arts exhibitions galore all around the island, some held in galleries, others in the open air but all attracting crowds of both locals and international visitors who’d come to Lamu especially for the festival. For instance, at the Wildebeeste Workshop Gallery, Yony Waite held a solo exhibition of her paintings, prints and tapestries that amplified the beauty and diversity of the island. 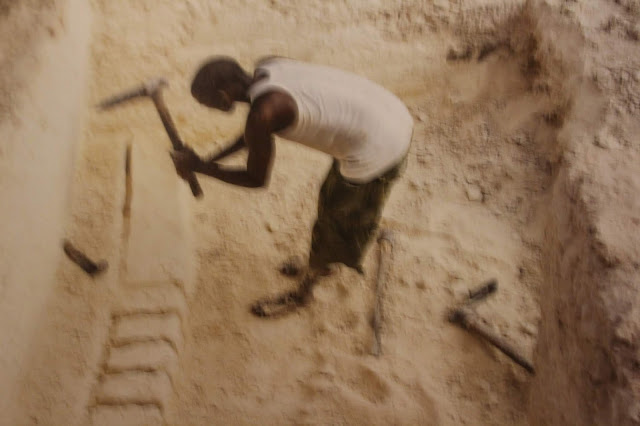 Baraka Gallery displayed paintings by Helen Feiler and photography by Corrie Wingate who also coordinates artist residencies at Anidan orphanage on the island. The exhibition was accompanied by a live performance of classical music by the Nairobi 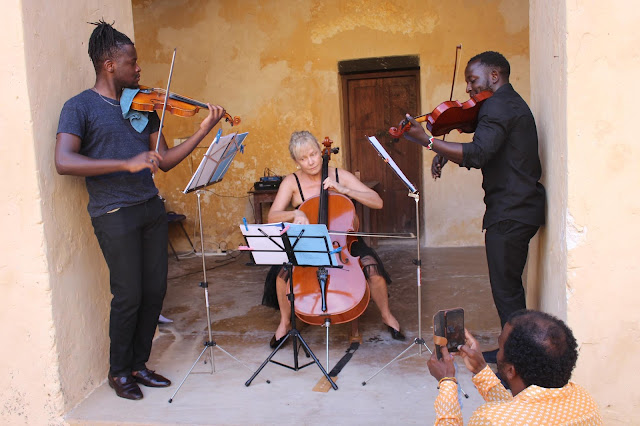 String Quartet who also performed at the star attraction of the festival, the World Premiere of the monumental ‘Maweni Carriers’ inside the courtyard of Lamu Fort.
More on the Carriers in a moment, since there was art all over Lamu town and Shela village. For instance, in a tiny dress shop on the edge of Shela beach, a lovely ‘pop-up’ exhibition of hand-pressed mono-printed leaves by Portuguese artist Juliana Oliveira was held the night before the unveiling of Joachim Sauter’s  eight majestic three-meter high African Mahogany wood sculptures at the Fort 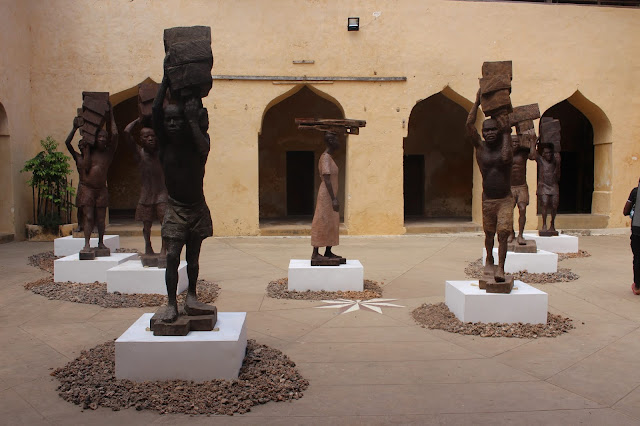 There were architectural tours as well, like one to Kinooni House on the back side of Shela near the Dunes. Built originally as a palace by the a governor of Lamu who served under the Sultan of Zanzibar, the place has been renovated by its new owner Michele Reilhac who’s now opened it to artists to use for exhibitions and art residencies. We also had the privilege of visiting Herbert’s nearly-completed Casbah which will have a house warming celebration later this year. 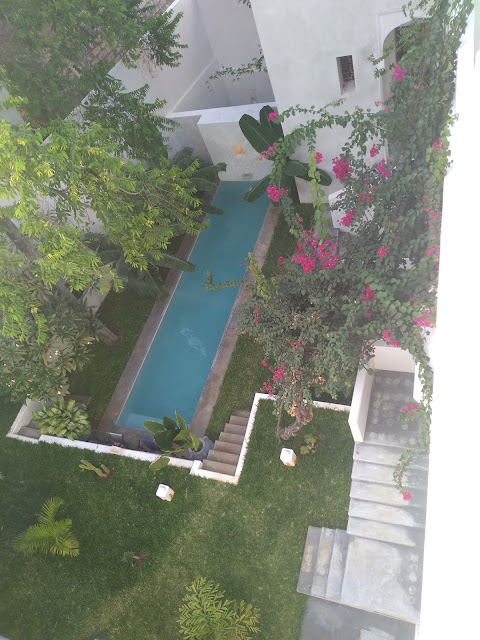 View of Kinooni House's pool and garden from above.

But it was the eight Maweni Carriers that held centre stage at this year’s arts festival. Developed out of an idea Herbert had after working with the carriers whose coral stones he’s been using to build no less than six elegant Swahili-style homes, all equipped with modern amenities but retaining the feel of old Lamu.
Herbert had proposed the idea generally to Joachim (aka Joe) who he’d invited to the first Painters Festival. Initially, Joe was hesitant even to come to Africa. But once he spent several weeks sculpting at Shela and then traveling across the bay to meet the Maweni carriers, he was deeply impressed with the work these men do. By 2012, he was working on the first Maweni carrier which he sculpted at Maweni harbor as a way of familiarizing the men with the work that he did. That first one is still there at the Harbor’s edge. 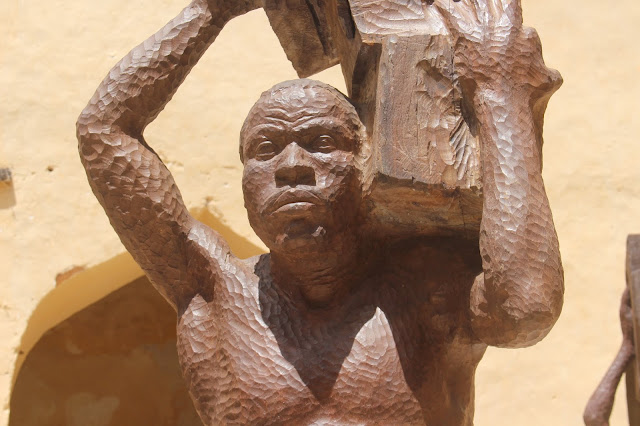 After that, Joe has come every year to work with Herbert and the carriers. “I’ve come for six weeks before Christmas and six weeks after,” says the Stuttgart-based sculptor who admits he wasn’t always easy persuading carriers to work with him. Ultimately, he found seven men who agreed to be photographed, sketched and even to seat in Joe’s studio so that Joe could sculpt finishing touches on each man’s face.
Joe and Herbert had planned to premiere the seven sculptures in February this year and even booked with the National Museums of Kenya to exhibit in the Fort’s courtyard. But then towards the end of 2018, Joe was feeling the work was incomplete. In a dream, he says he remembered a woman carrying firewood. She made him think twice about having one carrier be a woman. 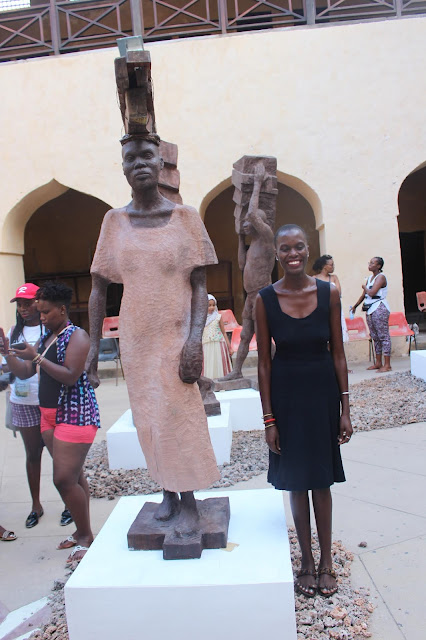 “One can’t really talk about Africa without speaking of the woman,” he says. Fortunately, his friend Achieng Andabwa volunteered herself to be his model.
So now, at Lamu Fort the one woman carrier stands at the center of the courtyard surrounded by the other seven. It’s truly a tremendous feat, but not just because African mahogany is such a hard wood. It’s because what Joachim’s created is a magnificent ensemble of larger-than-life fine art, even a monument to Maweni. 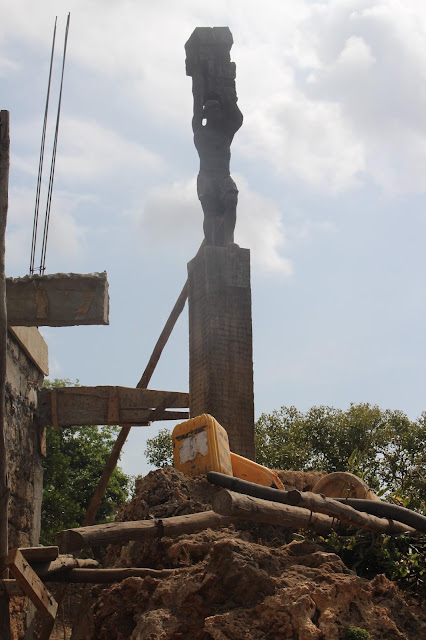 Joachim Sauter's first Maweni carrier which he left at the Harbor as a gift to the carriers. Now the community sees the         sculpture can serve the community providing them with a tourist attraction. 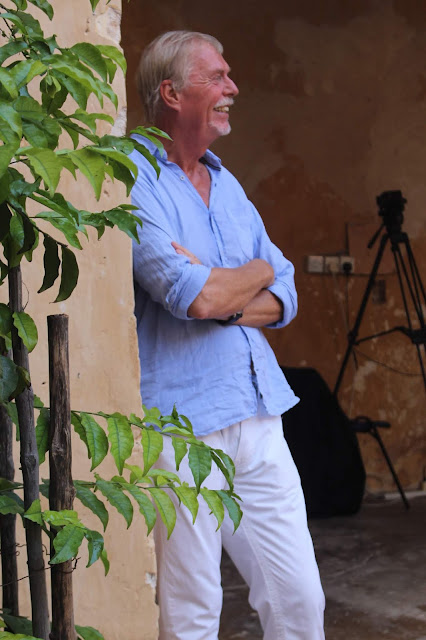 Posted by Margaretta wa Gacheru at 03:54