NATIONAL MUSEUM’S GOT ART INSIDE AND OUT 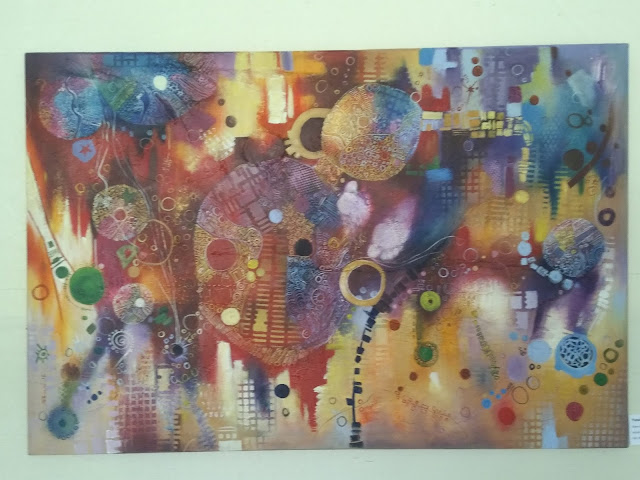 Let’s be clear. National Museums of Kenya are not art institutions. It’s wishful thinking to imagine that it is. That is why one’s ears perk up when a discussion started recently about Kenya needing a National Museum of Art.
But currently, a Kenyan art museum is still just talk so we must be grateful for the Nairobi National Museum where Kenyan artists’ works are not only to be found upstairs in the Creativity Gallery where the group exhibition of paintings and sculptures, ‘Glad Tidings’ has been extended through mid-February.
Even downstairs and outside, artworks are everywhere. Outside, there are glass sculptures by Tonny Mugo, stained glass windows by Nani Croze, a labyrinthine Peace Path by Elkana Ong’esa, a cement ‘Mother and Child’ sculpture by Francis Nnaggenda, another sculpture by Jackson Wanjau, Ahmed the Elephant, and several sculptures by the late Charles Carol Bwire. One is the true-to-life sculpture of Dr. Louis Leakey which rests right in front of the auditorium named after him and the magnificent monument dinosaur that intimidates you as you enter the Museum grounds. 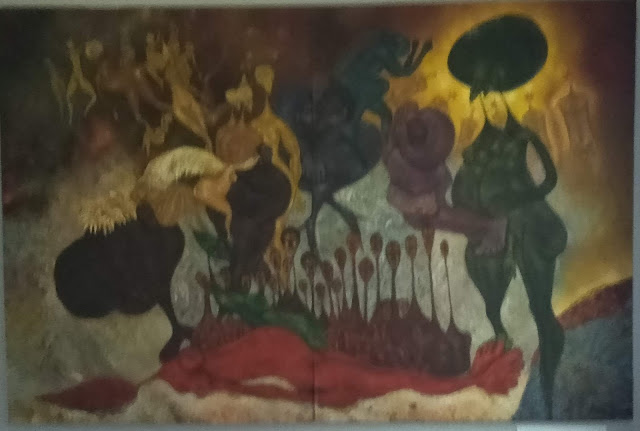 Anthony Okello's
Then inside, even before one enters the Creativity Gallery there are artworks on display by everyone from John Odoch-Ameny, Anthony Okello and Justus Kyalo to Kamau Kariuki. Of these last four, I believe only Kamau’s impressive impasto portraits were recently hung. 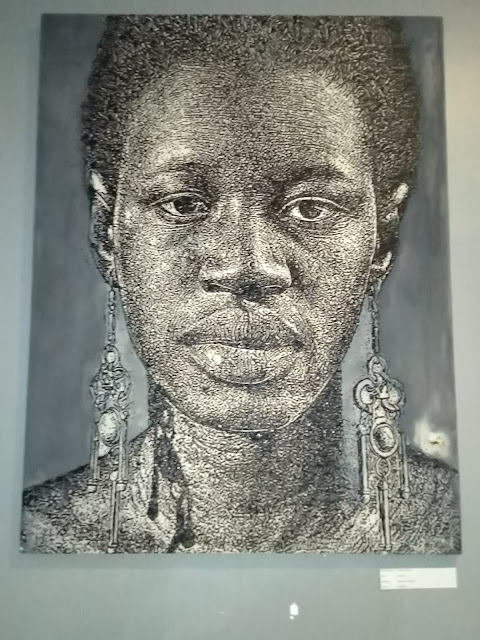 The other three are part of the Museum’s permanent collection.
I’m a fan of all of their work, but I was only introduced to Kamau’s portraiture last year. He was part of the Kenya Arts Diary 2019 Preview exhibition at Alliance Francaise and it seemed his painting was the most popular for your Kenyans to stand in front of while they were taking their selfies! That’s not to say selfie-popularity should be a measure of quality or value, but it does say something about a new generation of Kenyans’ growing appreciation of fine art.
The exhibition upstairs in the Creativity Gallery is one of the best I have seen in a while at the Museum. It’s a generous mix of color, character and technique.
Of the five painters featured in the show, namely Anwar Sadat, Deng Chol, Ngula Yusuf, Ruth Nyakundi and Yusuf Ssalu, it is only Ngula’s art that I hadn’t seen before. He only had one piece in display, a colorful abstract work that had a warm rhythm and muted blend of hues to it. 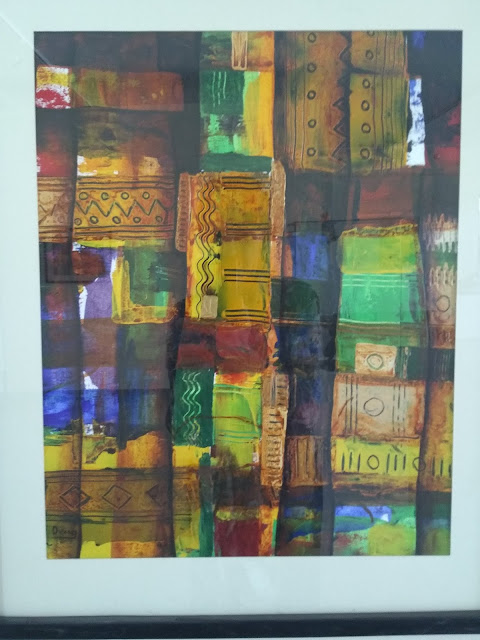 Ssalu also only had one piece. And like his fellow Ugandan, his work is colorful, abstract and suffused with joyful energy, fitting for the exhibition’s name. The other Ugandan in the show, Anwar Sadat has two works which echoed a wildlife theme that strikes one instantly as you enter the gallery. That’s because Bwire’s animal sculptures are stunning contrasts to the paintings. His bronze-like miniature sculptures of lions, leopard, rhino, hippo, tortoise and eagle take me back to a time when I met his uncle, the late Charles Bwire who was busy installing his sculpture of Louis Leakey and I was in awe of his uncanny ability to precisely capture every delicate feature of the great paleontologist’s human form. 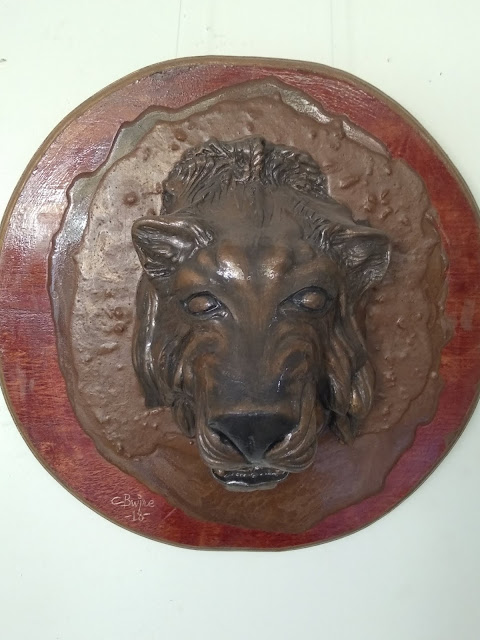 The senior Bwire explained he had never gone to art school but had worked for years for Zimmerman, the taxidermist who all the hunter went to with their kills for him to disembowel and then reconstruct as prized trophies. It was there that he learned all about anatomy and how both humans and animals are constructed, from the inside out.
With that history in mind, I must say my favorite pieces by Bwire the Younger are his lion ‘trophies’ which he made, not from a real animal ‘kill’ but from plaster and bronze paint. 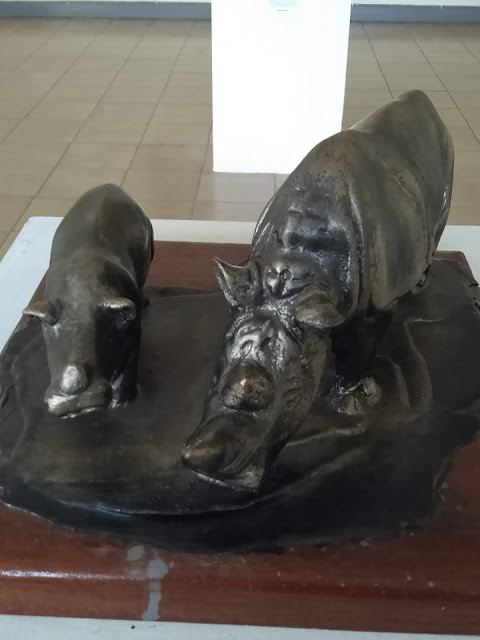 Posted by Margaretta wa Gacheru at 11:49