‘THE DEBATE’ DARES TO DISCUSS MOST CONTENTIOUS TOPIC 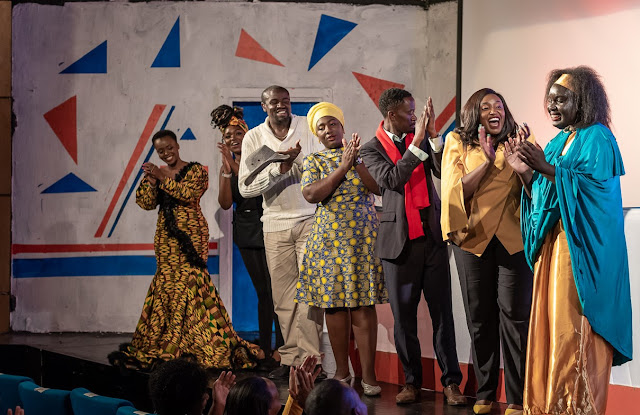 Mbeki Mwalimu and her Back to Basics cast in 'Live @ 9

Talking heads currently occupy a big chunk of time on local TV discussing a range of topics. But I doubt if any of them have ever deliberated on the one addressed last weekend when Back to Basics premiered in Nick Ndeda’s third original script simply entitled ‘The Debate’.
“It might be difficult to imagine that a show where the cast sits in one place for the whole play can be exciting. But you’ll be surprised to find that it is” says Ndeda just before the Sunday night performance of the script that he co-wrote with B2B founder, Mbeki Mwalimu.
“The story was her idea. It was my job to translate her thoughts into the scripted play,” he says modestly. It was a challenge he’d taken on twice before, first when he wrote ‘Man Moments’, inspired by one act of B2B’s ‘Breeze II’, and then, ‘Decompressed’ which the company staged  last December.
‘The Debate’ takes place on the TV talk show ‘Live at 9’, anchored by Donna Jawali (Mwikali Mary) whose program apparently thrives on controversial topics that pick up top ratings every week.
But the topic of ‘Rape in Marriage’ generates even more explosive energy than even Donna can control. 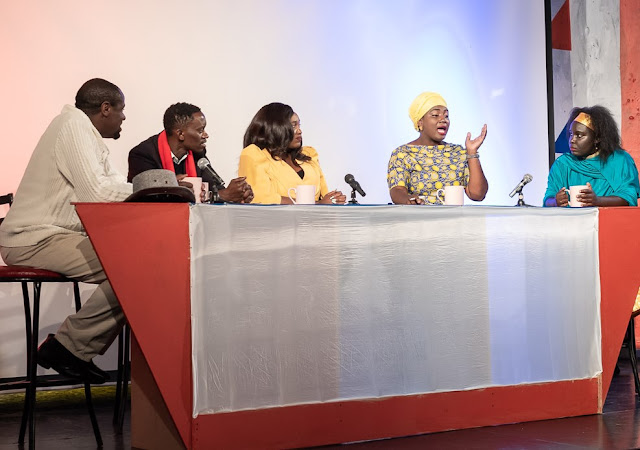 “The show wasn’t really meant to be a comedy since it’s a serious topic,” Ndeda says. “But there are several moments in the show that audiences find funny,” he says, understating the amusement local audiences found, especially in the contentious word battles that went on between hardcore radical feminist, Dr Monika Marete (Wakio Mzenge.) and bombastic alpha-male chauvinist and divorcee, Kamau wa Kamau (Gilbert Lukalia).
The other two debaters who also brought their own far-out perspectives to the debate are Pastor Ingrid (Agnes Kola) of the MCN (Middle Class Nairobi) church and the writer and rape survivor, Tom (Bilal Mwaura).
Donna is delighted to bring up the topic on TV since Kenyans, until recently, rarely spoke in public, leave alone on TV, about sex. It’s a titillating topic that’s still taboo to discuss publicly, leave alone debate. Even the issue of rape is usually discussed only in euphemistic terms such as ‘domestic abuse’ or ‘violence against women.’
So to hear Donna announce her show’s theme of marital rape is a stunner despite her quoting actual news reports of rape on the rise countrywide. It is her debaters who flesh out the topic, often vehemently convinced of the correctness of their radical positions.
Their deliberations makes for explosive moments when not even Donna can cool down the heated debates over everything from conjugal rights and marital servitude to sex as a gift from God and women as ‘sex toys or baby-making machines.
Kamau even insists that spousal rape is a myth; it doesn’t exist. He dismisses the subject outright. His view is that matrimonial vows implicitly accord marital and sexual rights, irrespective of whether one spouse consents to the advances of the other or not.
Dr Monika will have none of that. She adamantly rejects Kamau’s views on everything from the irrelevance of consent to ‘foreplay’ being unnecessary. The word wars between them get so highly charged that Donna finally has to kick them both off the set.
But it is Pastor Ingrid who has the most dumbfounding positions on marital rape. Her perspective is similar to Kamau’s. She agrees there is no such thing as rape in marriage since women are meant to ‘satisfy’ their men in all respects. Both she and Kamau claim wedlock not only assures sexual rights but responsibilities as well. He bases his argument on marital vows while her basis for accepting subordination to her man is Bible-based. But either way, Dr Monika sees marriage on their terms as woman being enslaved to her spouse.
But it is Tom who drops the IED (Improvised Explosive Device) on the show when he says he knows first-hand that marital rape is real because he has been raped by his wife.
Tom, despite being a shy, introverted writer, confesses he has a low sex drive which means his wife was never ‘satisfied’. Getting graphic about what she did to him is the final ‘juicy bit’ that heightened Kamau’s careless ‘trash talk’ and Monika’s ferocious rebuttal. It also inspires Ingrid to stand up and sing a hymn to comfort Tom.
The dissonance of that final row leads to Donna ousting both Monika and Kamau as her last resort to reclaiming control of her live show.
B2B has been bold and innovative from the start, but The Debate takes the cake!

Posted by Margaretta wa Gacheru at 02:25