VALENTINE SHOWS WERE PLAYFUL AND POETIC

Both Zippy Okoth and John Sibi Okumu were ‘in their element’ last week when Valentine’s Day put many people’s focus on Love, be it romantic, puppy, pleasurable or drenched in pain.
Fortunately, neither performing artist had much time to dwell on pain. Sibi-Okumu, at a private reading of poetry that I had the good fortune to attend, gave a delightful rendition of poems by everyone from Shakespeare, Yeats and Dorothy Parker to Maya Angelou, e.e. cummings and Ogden Nash.
“I’m a great lover of poetry so I was happy to come,” says Sibi who confessed he took some time poring over his many poetry anthologies to find just the best selection to suit the occasion, which was casual and did not necessarily include lots of poetry lovers.
Nonetheless, many unexpected guests showed up at the event. They had come specially to listen to Kenya’s own renowned poet-playwright and actor who is also a former TV interviewer at ‘The Summit’ and former French teacher. 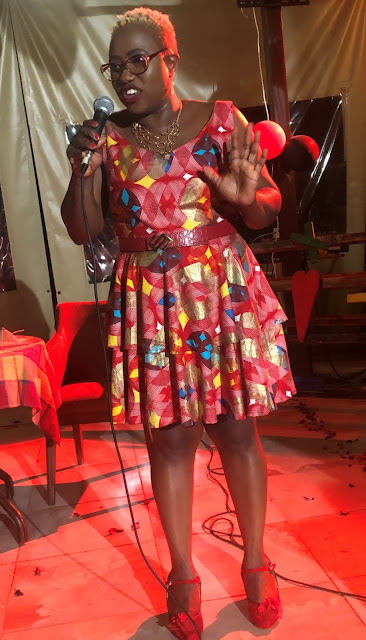 Meanwhile, Dr. Zippy Okoth specifically chose Valentine’s Day to stage her latest one-woman performance, ‘Agatha: A Hopeless Romantic’’ at Kwa Wangwana Wine Garden in Lavington.
‘Agatha’ just happens to be the actor-playwright’s middle name, so we can assume her show was, like her previous two, based on her ‘Diary of a Divorced Woman’, autobiographical.
But unlike the Diary shows, where Zippy was slightly self-pitying due to her ex-spouse’s gross misconduct, ‘Agatha’ was light and lovely. Zippy was in fine form as a singer-actor whose mixture of song and story (more than seven short tales about her passing flings with a wide assortment of interesting men) was deliciously fresh. She veritably frolicked from one fellow to the next. But one has to say she only seemed to have one boyfriend at a time. 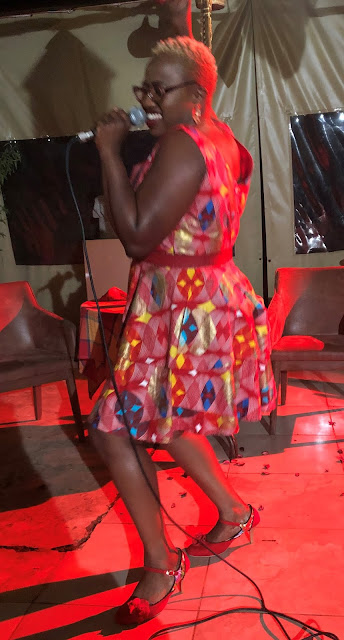 Kwa Wangwana turned out to be the perfect venue for her performance as it was cosy, while her style was conversational, interactive and intimate. And as her audience was largely female, that also may have helped her convey her stories frankly and freely.
‘Agatha’ seemed to be a show that is all about ‘changing the narrative’ of the traditional (Westernized) woman who defers to her man and waits on him like the subordinate ‘help-mate’ who was born of Adam’s rib.
Zippy’s show was utterly entertaining as her magical mix of stories and songs like Crystal Gayle’s ‘Hopeless Romantic’ was accompanied by keyboardist David Mwangi.

Posted by Margaretta wa Gacheru at 07:28