SLOW KICKOFF FOR KENYAN THEATRE IN 2017

The New Year seems to be a slow starter for Kenyan theatre as hardly anyone has a plan to stage a show in January apart the intrepid Muthoni Garland who promised her Nyef Nyef Storytellers will perform later this month. 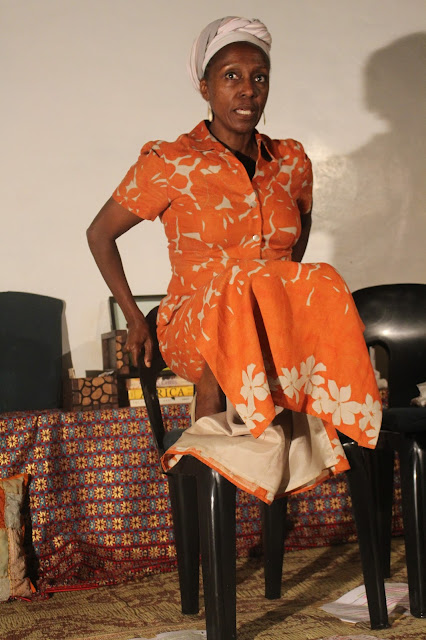 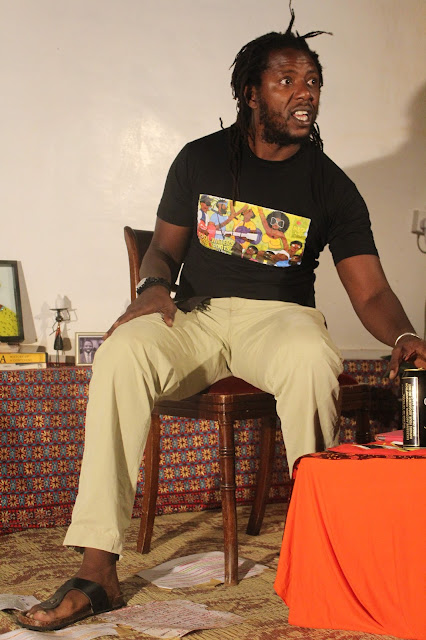 Tete Burugu in A White Wedding, one of the Nyef Nyef storytellers
But that’s not to say all thespians are sleeping since Sitawa Namwalie’s premiering her original play ‘Room of lost names’ next month; Elsaphan Njora plans to stage street theatre for Valentine’s Day, Festival of Creative Arts will bring back ‘Tit for Tat’ at Kenya National Theatre in February and Silvia Cassini plans to re-stage ‘A Man Like You’ early this year. 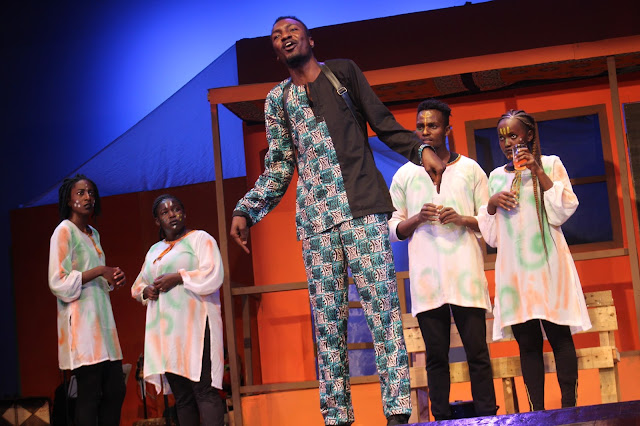 Maina Olwenya (centre) in Edufa also starred in 'A Man Like You'
Otherwise, late last year, the Oxford dictionaries chose the term ‘post-truth’ as its ‘international word of the year’ for 2016. Coincidentally, two of Nairobi’s most popular theatre companies were apparently tuned into the same global trend that defined post-truth as basically ‘big talk based on hot air and huge egos being more influential than truth and fact’.
Staging shows that amplified the power of presence, theatre companies like Festival of Creative Art and Heartstrings Entertainment both ended their year by putting on combustible social satires that exposed and made fun of liars and con-men who seemed to win hearts and minds by being deceitful, audacious and passionately self-serving while seeming to be upright and honest. 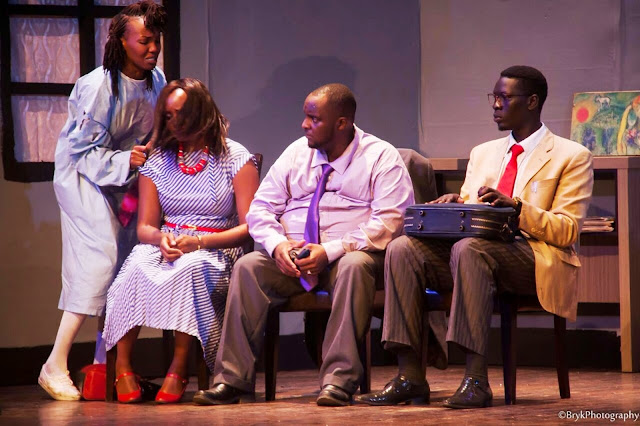 In FCA’s ‘Nuts+’ and Heartstrings’ ‘Behind my Back’, it was invariably the biggest and most bombastic liars who seemed to succeed. They’d do so simply by making outrageous claims pronounced with so much self-assurance that even supposedly smart people believed their lies. 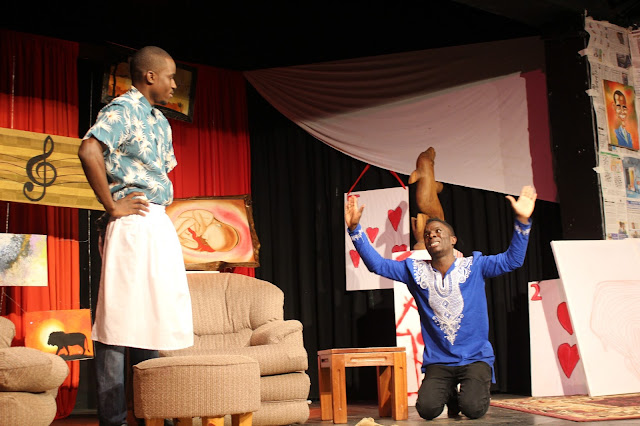 Some critics might question calling ‘Nuts+’ a satire since there’s been a murder with the dead man’s wife charged with bumping him off; also she’s charged with being mentally sick with her own family claiming she needed to be locked up for life.
In fact, the young woman, Claudia (Helena Waithera) was a survivor of child-abuse inflicted by her step-dad, Donald (Bilal Wanjau) who’s a politician keen to put her away.
‘Nuts+’ was actually a serious drama that grappled with hard-core issues, but for me what gave it a satiric edge was the way Donald ultimately got exposed for being the scum-bag he was. True, he’d managed to become a politically powerful mayor after persuading a gullible public, including Claudia’s shrink (Mourad Sadat), his family’s prosecutor (Bokeba Mbotela) and even his wife (Marianne Nungo), Claudia’s mum, that he was an honest, good man.

So seamless were Donald’s lies that he almost got away with locking up the one person who could destroy his political career.
Fortunately, it was finally the Judge (Angel Waruinge) who saw through the parents’ pretentious plan and rule in Claudia’s favor.
But just imagine the way everyone else got duped by Donald, the child predator and the one who should have been put away for good.
Probably, the better example of a ‘post-truth’ play that more flagrantly satirized con-men and women was Heartstrings’ ‘Behind my Back’ which spoofed so many ways that some Kenyans have learned how to play kleptomaniac games and slip into other people’s shoes (pocket-books and beds) without the slightest pang of guilt. 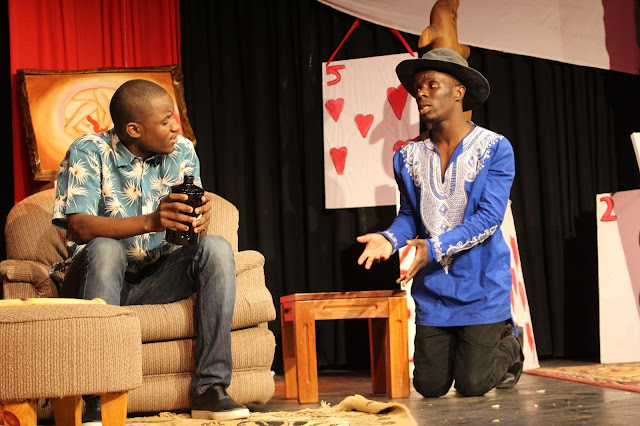 Stealing other people’s identities isn’t simply a ‘Kenyan thing’. Sadly, it’s happening all over the world, to the point where hackers can get into people’s personal secrets and even into their bank accounts without fear of getting caught.
In ‘Behind my Back’, Amos (Victor Nyaata) was Dominic’s (Nick Kwach) houseman, but after the boss left town (almost), Amos took on Dom’s identity so he could woo the pretty lady, Nyokabi (Adelyne Wairimu) who showed up at his front door. 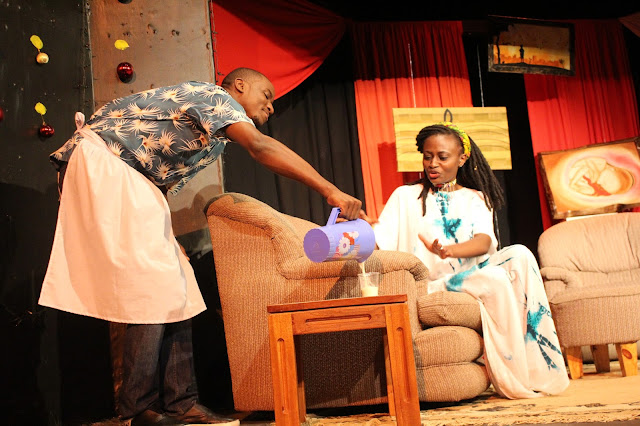 Not quite equipped to step into the boss’s shoes, Amos’s pretentious ineptitude was terribly funny, but Nyokabi initially seemed impressed. But then the boss returned, (his flight having been cancelled), quickly sized up the scene, and also pretended to be Amos to help his houseman save face.
Their dexterous duplicity was delightful, especially as they swapped identities severally, reverting back to the truth, every time Nyokabi left the room. 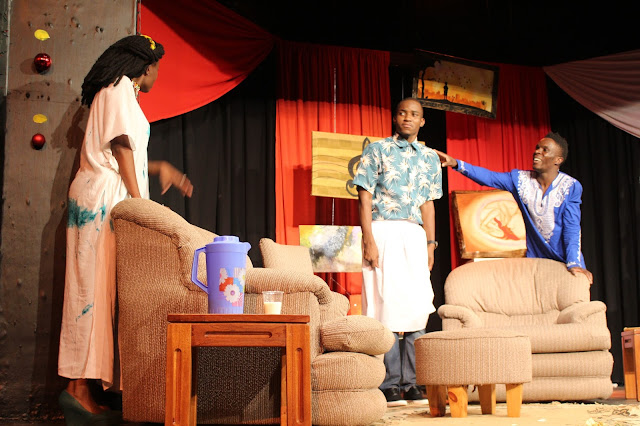 But what was really fun was when the boss’s mistress Elizabeth (Mackryn Adhiambo) showed up, only to find her maid Nyokabi there, wearing her clothes and pretending to be her.  It was a shocker, especially as we saw everyone was a trickster playing a game. 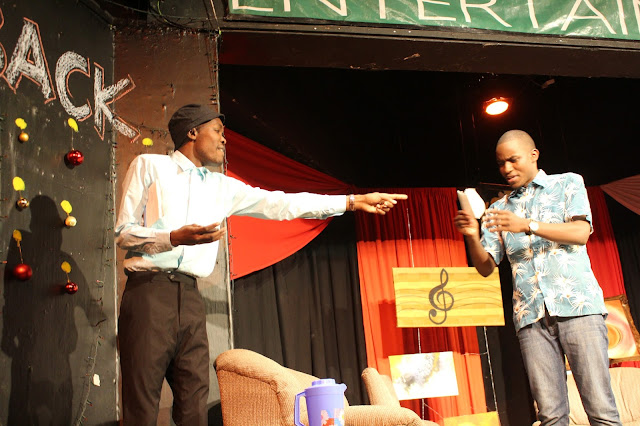 But the ‘coup de grace’ came when Elizabeth’s spouse (Cyprian Osoro) showed up and the whole charade exploded, proving that post-truth ultimately can’t last forever. Truth, we have heard, is bound to win the day. But until Oxford finds a better term, local theatre troupes will be right in step with our ‘post-truth’ times. 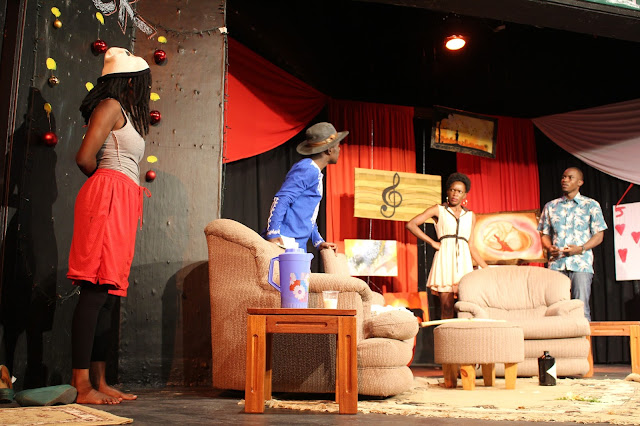 HAPPY NEW YEAR 2017 TO ALL!
Some of the thespians I tried to contact both to thank for their great work & for a story on theatre in 2017, but most are still contemplating what comes next in the new year. Among them were:
Elsaphan Njora, Sitawa Namwalie, Steenie Njoroge, Eliud Abuto, Sammy Mwangi, Muthoni Garland, John Sibi-Okumu, Kamau Ndungu, Sheba Hirst, Harsita Waters, Silvia Cassini, Mshai, Maimouna, Sitati, Edwin KNT, Tumbo, Friends, Fanaka, Braeburn, Lukalia, Kigundo, Keith Pearson, Nyaata, Phoenix, Aghan, Checkmate, and many more.

Posted by Margaretta wa Gacheru at 03:21