KIOKO: GALLERIST-ARTIST HAS SHOW OF HIS OWN 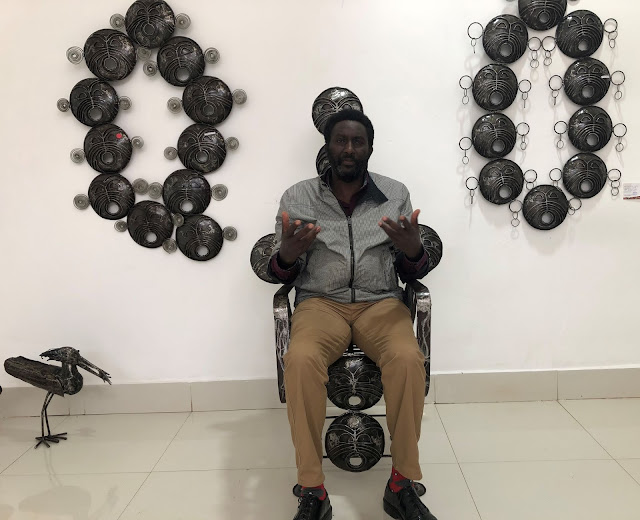 Kioko Mwitiki is finally having an exhibition solely devoted to his sculptures and paintings. It’s about time!
Ever since he shifted from Pimbi Gallery to the Kioko Mwitiki Art Gallery, he has given his art space over to young, hopeful artists who’ve appreciate its strategic location next to Lavington Mall as well as the opportunities Kioko gives to others to exhibit in his space. He’ll leave a few of his pieces around, as if they are meant to blend in and not overshadow the newcomers’ works.
But Kioko’s art has never simply ‘blended in.’ His life size sculptures of elephants and giraffes always stand out, requiring ample space (such as outside JKIA) to reveal their monumental beauty. 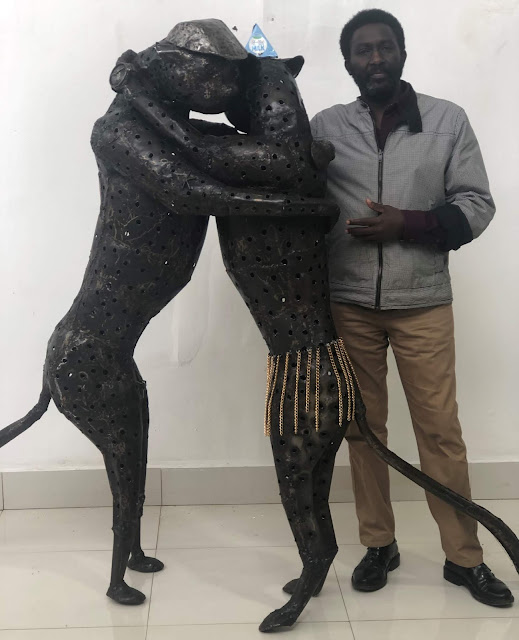 Kioko’s first solo exhibition of 2020 contains few jungle-size pieces, the sort that he’s shipped abroad in giant containers so they can be shown in pLaces like the San Diego Zoo and Santa Fe Desert Museum.
Best known for his recycled scrap metal sculptures of Kenyan wildlife, Kioko includes such creatures in his current show albeit abridged or in miniature forms so they can fit into his gallery.
For instance, he has a beautiful aerial mobile of flying metal fish which occupy zero wall space. (“The big ones are eating the small ones,” says the artist who can’t help making a political statement in his art.) Otherwise, he leaves room for some of his paintings which we practically forgot he used to do.
But if one doubts that Kioko never stopped being a political animal himself, just ask him to explain his two life-size cheetahs who are apparently in love and in a ‘cheetah hug’. They’re meant to say something about BBI and the Handshake, he claims although that’s not immediately apparent. Yet the sight of the Brookside milk carton cap resting on one cheetah’s head gives one a hint. “One is Raila, the other’s Uhuru,” he confesses as he adds, ”I always like injecting an element of humor to my art.” 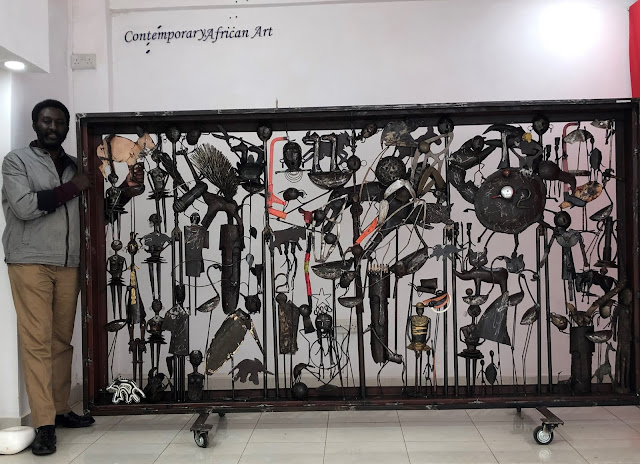 But amusing or not, Kioko doesn’t confine himself solely to creating creatures for this exhibition. Using more than two dozen chapati pans (which also could be stir-fry woks), he’s created a ‘Chief’s chair’ plus a set of two chapati pan frames to complete the elder’s furniture.
What for me is the most fascinating piece in Kioko’s show is the giant semi-abstract screen that he calls ‘The Story of Creation’. How he made this ingenious piece leads him to explain the origin of his own transformation from an artistic practice of oil painting to creating scrap metal sculpture.
1986 was the year he was meant to graduate. But as Kenyatta University students were agitating for political change, he got picked up, detained and finally released with fellow agitators, only to be told he wasn’t going back to ‘Uni’ right away. Fortunately, he has a sister who he says ‘meant for [him] to learn a lesson’ so she took him to work in a machine factory. “That was where I learned to weld. There was nothing like it at KU,” he says.
The irony doesn’t escape him, that while he was meant to feel the pain of losing his ‘big chance’ in life, instead he found the job that led him to his destiny. For Kioko is best known as a brilliant sculptor. What’s more, he has taken time to teach many young welders how to work and be creative simultaneously.
He has got a few paintings at the show; but by far, the most impressive works at Kioko’s gallery are his scrap metal pieces. They also serve as signatures of his art.

Posted by Margaretta wa Gacheru at 07:29