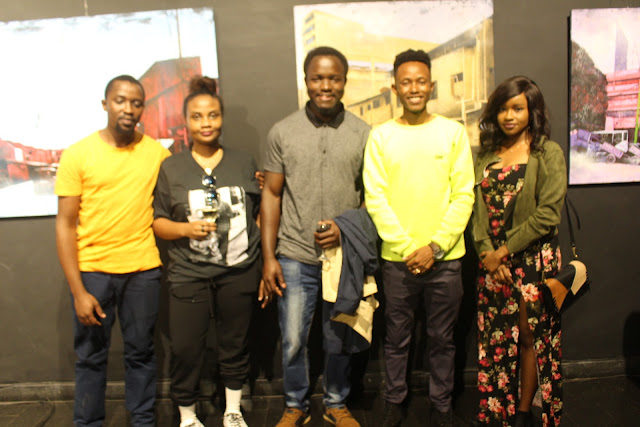 Some of the KU Creative Millennials

Kenyatta University art students have finally begun to come out from their hallowed halls of academia to share the spoils of their training with the world outside.
Currently featuring at Alliance Francaise, the Creative Millennials are a fluid band of current and ex KU fine art students who have been brought together by the most outgoing among them, Andrew Chege aka CRAE which he says is short for Creative Real Artistic Energy. 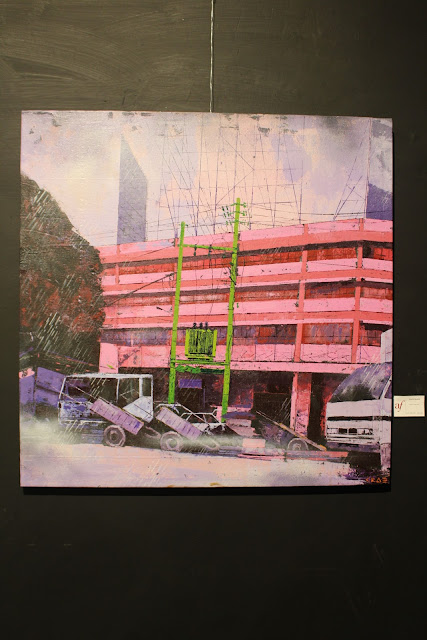 Crea isn’t shy about his desire to have his art exposed to the light of day. Currently, he has several paintings up at the Karen Country Club. He’s also exhibited at the Kenya Art Fair. And when he first entered his art in the Manjano Nairobi County annual Art Competition in 2018, his piece won first prize in the student category. Then the following year, he had the nerve to enter his work in the established artists category and won a first yet again.
But when the 24-year-old got the chance to exhibit at Alliance Francaise, he didn’t want to have just a solo show. Instead, he asked several KU art students and alums to join him for last Friday night’s exhibition opening. 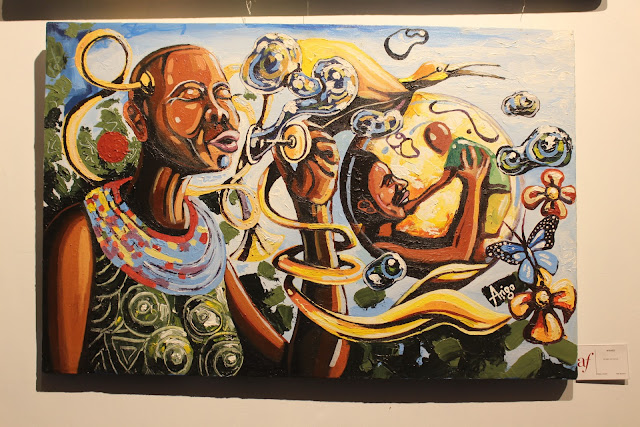 Altogether there are eleven KU artists currently constituting the Creative Millennials. Besides Crae, they are Joseph ‘Ango’ Makau, Taabu Munyoki, Martin Musyoka, Elizabeth Kiambi, Margaret ‘Melody’ Ngigi, Otto Gonde, Zephanleah Lukambo, Moses Sabayi, Elam Abish and Philip Oyugi.
The show itself signals a new generation of Kenyan visual artists, each having their own distinctive style, be it surrealistic like Ango Makau’s or super-realistic like Zephaniah Lukwamba’s, multimedia like Taabu Munyoki’s, abstract like Elizabeth Kiambi’s or photographic like Melody Ngigi’s. 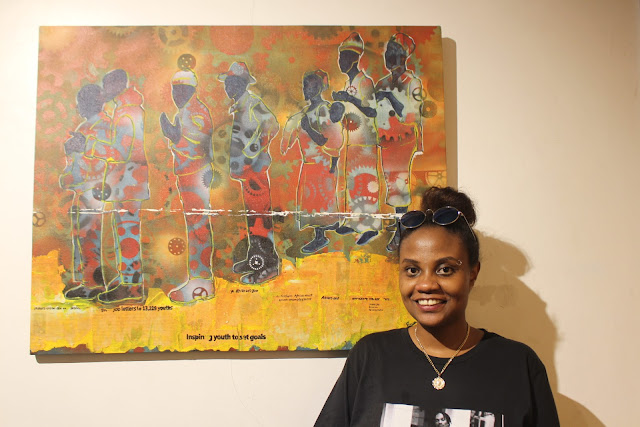 What’s more, each of the eleven has acquired the necessary technical skills from university lecturers like Anne Mwiti. Mwiti is one of the few faculty members at KU who has shown her students how it is done as far as going public with their art is concerned. Her own paintings have been exhibited everywhere from Circle Art and Polka Dot Galleries to Nairobi National Museum, Karen Village and galleries overseas.
But Crae isn’t the only one of Mwiti’s students to go off campus and get involved in the local art scene. A number have previously exhibited at Manjano, the Kenya Art Fair and in various corporate offices where bare walls have given way to displaying young Kenyans’ works of art. 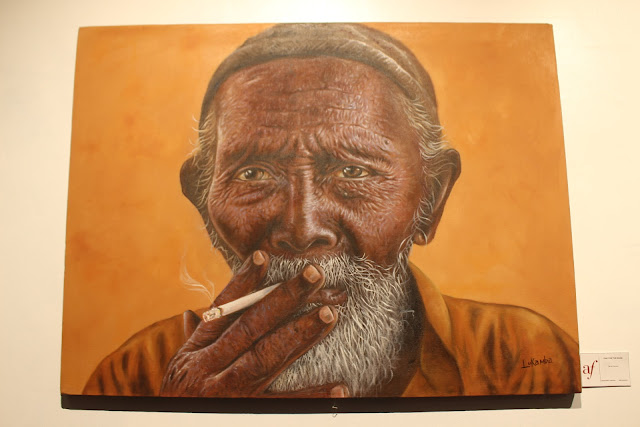 But Crae’s artworks are the ones that occupy the main gallery at Alliance. Along one wall are hung his series on military men, each dressed in colorful uniforms and equipped with all sorts of high-tech gear.
It’s rare to see soldiers looking so slick and being the subject of engaging art, except perhaps when they’re featured in battle. But Crae says he once dreamed of being a special ops soldier and that’s how they came to be romanticized in his art.
The rest his works on show are multicolored buildings devoid of human life. The skies behind them are beautifully blended; otherwise, the buildings feel abandoned, curiously impersonal and visually dystopic. 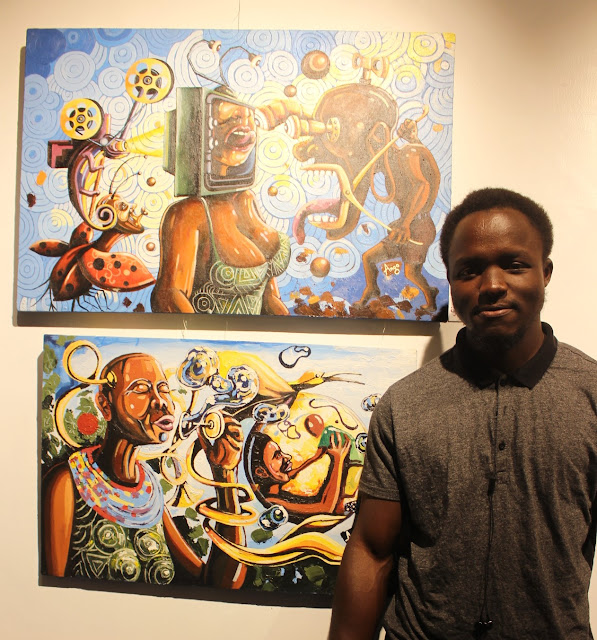 The remainder of the exhibition is devoted to the other Creative Millennials who only have a piece or two on display, but who nonetheless reveal the sort of exciting young talents emerging out of KU.
For instance, Ango Mutua has just two paintings here, but a work like ‘Mirror of Deceit’ shows him to be a surrealist in the Salvador Dali vein. That is, he translates a complex human relationship into one fantastical image that begs you, the viewer, to stand and contemplate its meaning. His imagery is edgy, maddening and amusing all at once. 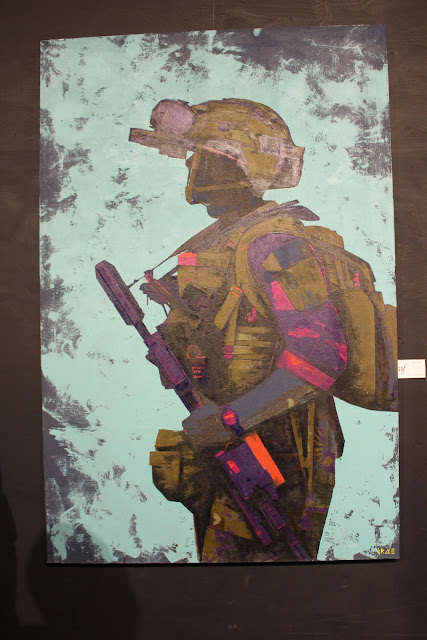 In contrast, a work like Taabu Munyoki’s ‘Moving Part III’ is a magical mix of collage and paper cut-outs, of peasant mamas on foot peculiarly equipped with mechanical gears to give them traction and a moveable boost.
Her other semi-abstract work in the show is untitled but also appears to be a cyborg with machine parts built into her head and mind. 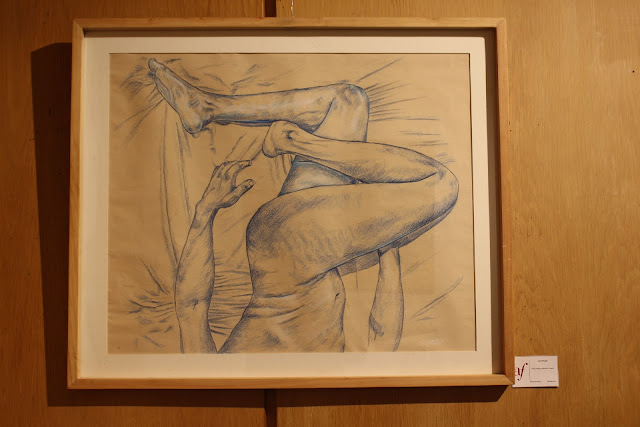 Meanwhile, Martin Musyoka has only one pencil drawing in the show. It looks like a study for one of his notable nudes (the art form he’s most known to paint). However, this one is discrete, only highlighting a thigh and leg apparently in a yoga pose. His untitled work is hanging upside down, leaving one to appreciate his anatomical style of naturalism. 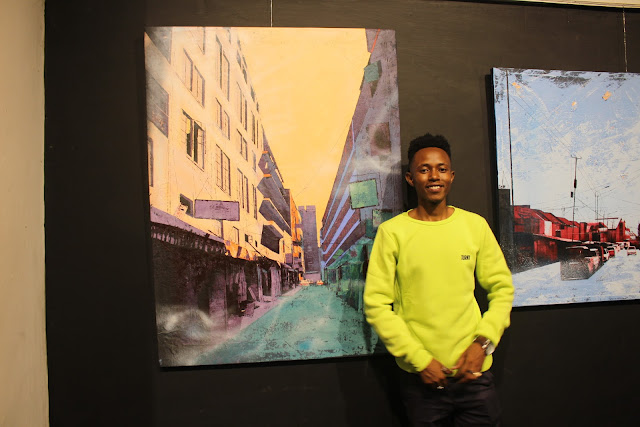 But finally, it’s Zephaniah Lukwamba’s hyper-realistic portrait of an old, weather-worn man that is one of the most striking oil paintings in the show.


Posted by Margaretta wa Gacheru at 07:12