SAKINA AND JUSTIN A ‘CLASS ACT’ 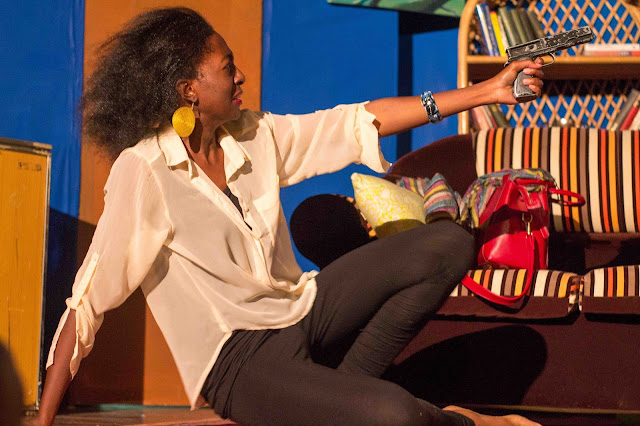 Sakina in 'What happens at dusk'

Long before Mildred Sakina and Justin Mirichii decided to get hitched, they had lots in common, most specifically, theatre and the performing arts.
It was around the same time that these two busy thespians also chose to establish their own production company.
“The first play we produced as Sanifu Productions was ‘Night, Mother’ with Dr Julisa Rowe and Rachel Kostma,” says Sakina who previously had Dr Rowe as her theatre lecturer at Daystar University. 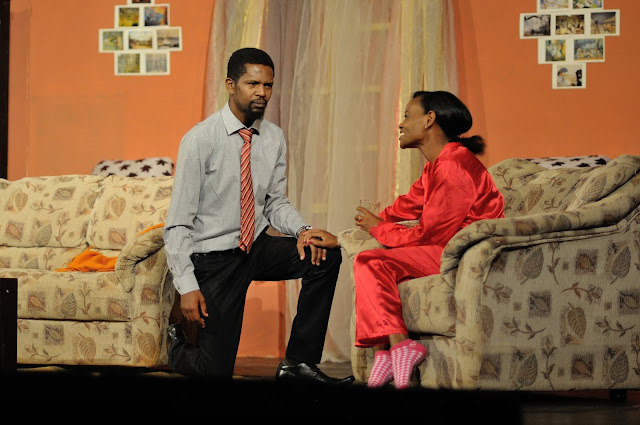 Justin in 'My Better Half' which he also wrote

“We chose the Swahili word, sanifu, meaning the most proper way to do something,” says Mirichii. “To us it also means treating actors well, both on set and in terms of paying them what they are worth,” he adds.
“It also implies being professional by being disciplined and keeping time,” she says.
Clearly, the term ‘sanifu’ has multiple meanings for these two multi-talented founders who are both actors and playwrights as well as each having their own individual strengths.
“For us, Sanifu isn’t just about creating entertainment. We also want to produce shows [be they live theatre or films] that have impact on society,” adds Mirichii.
One of the most impressive ways that they’ve proved their social relevance is by running an ongoing series of Actors Workshops that aim to impart practical knowledge and skills to aspiring performing artists. 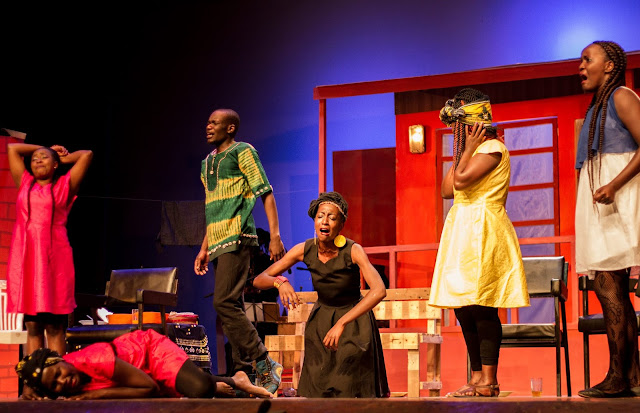 “There’s a story to how we started the workshops,” says Sakina. “Justin kept getting emails from young actors who wanted to advice on how to break into the field. Finally, we decided to create a platform where they could be mentored on many aspects of performance,” she added.
Since April 2018, Sanifu has run no less than ten day-long workshops on everything from script analysis, character development and voice to branding, marketing and drawing up contracts.
“Initially, admission to the workshops was free; but as we brought in professional facilitators, we had to give them something for their time and expertise; so we had to start charging a bit,” says Sakina. 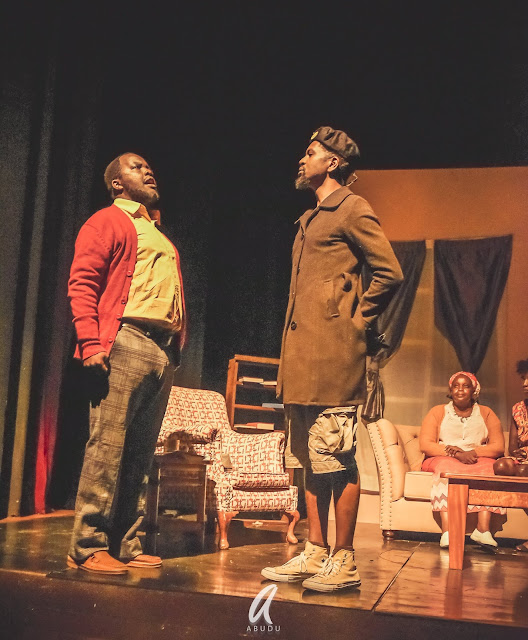 But Sh300 hasn’t deterred young actors who heard about the workshops, mainly on social media.
“We have a Facebook page entitled ‘Class Act’ where we post our information,” says Mirichii who majored in IT at Strathmore University at the same time as Sakina was doing Communications at Daystar.
The two say they would ultimately like to start a theatre and film academy as well as an Actors’ Sacco. But those are future plans. In the meantime, both are busy
Together, they have worked in film and on stage. For instance, for the Machakos Film Festival, he wrote ‘The Pitch’ and she directed it. “Unfortunately, our submission was late so we had to put it on YouTube in December,” Sakina says.
They were both acting in the short Docubox film ‘Millet’ by Lydia Matata,” They also helped produce the Chatterbox shows, ‘Bei ya Jioni’ and ‘Lwanda Rockman’ which she stage-managed and he acted the role of Konte in Lwanda. Chatterbox also makes films, two of which Sakina did production management for and Mirichii did casting. “Both ‘Trap’ and ‘318’ were produced for the Machakos Film Festival, scripted by JJ Jumbi,” says Mirichii, who also wrote several screenplays in the last two years. They included ‘My Better Half’ in which he co-starred, ‘Free Fall’ and ‘Stangers by Blood I and II’ for Back to Basics theatre group. 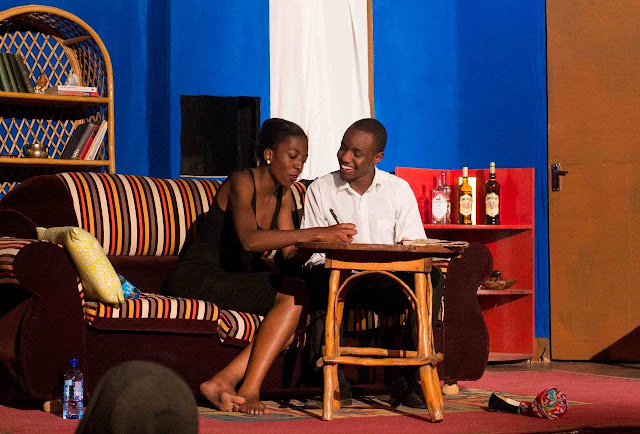 Sakina in 'What Happens at Dusk' by Martin Kigondu

But Mirichii may be better known as an actor than a scriptwriter. They both acted in several shows at Phoenix Players although at different times. He was in shows like ‘Fences’, ‘Carry Me Kate’, ‘Pull the other one’ and ‘The Hitman’ while she performed in ‘Apples from the Desert’ and ‘Enough is enough’.
Sakina also acted with Gilbert Lukalia in ‘Edufa’ and Martin Kigondu in ‘What happens at Dusk’.
“We met after Edufa, when Gilbert was planning another production. It never materialized, but something better happened!” says Mirichii, giving a smile to his spouse.
As they prepare for the coming months, the Sanifu founders already have busy schedules. 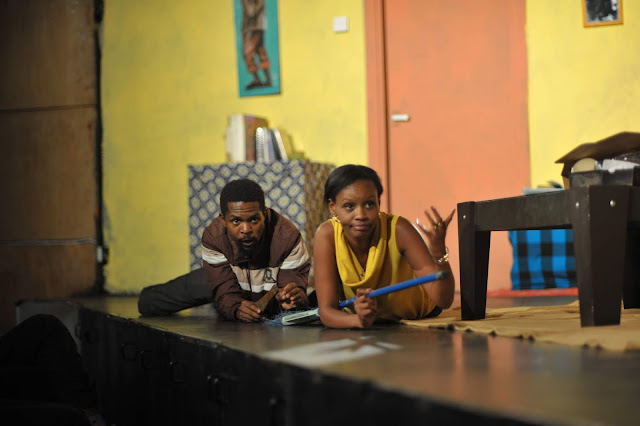 Justin in 'My Better Half'

Sakina is writing two scripts, one a drama, the other a film about women. She also just finished filming ‘Brikicho’ with Docubox support. Mirichii is also writing scripts, one a play, the others screenplays for film. He too was recently acting in the award-winning film, ‘Watu Wote.’
Meanwhile, they will continue doing Actors Workshops starting again next month.
“You can also find most of our films at YouTube,” Sakina says. “Otherwise, we are at ‘Class Act’.
Clearly, they also are a class act! 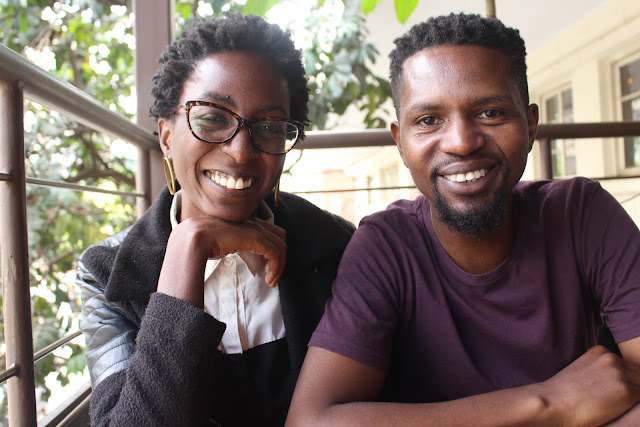 Posted by Margaretta wa Gacheru at 05:39