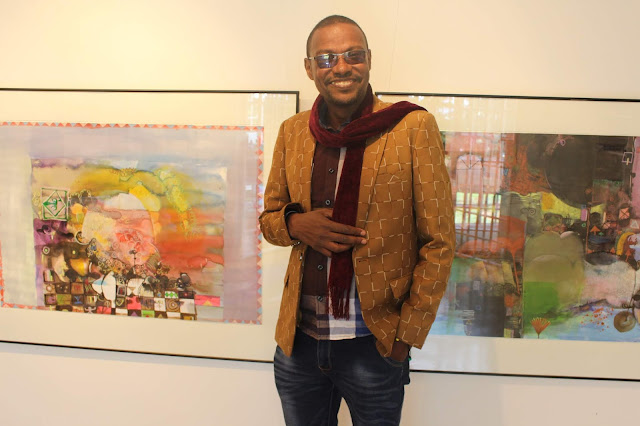 SUDANESE ARTIST BACK IN NAIROBI FOR HIS SOLO SHOW 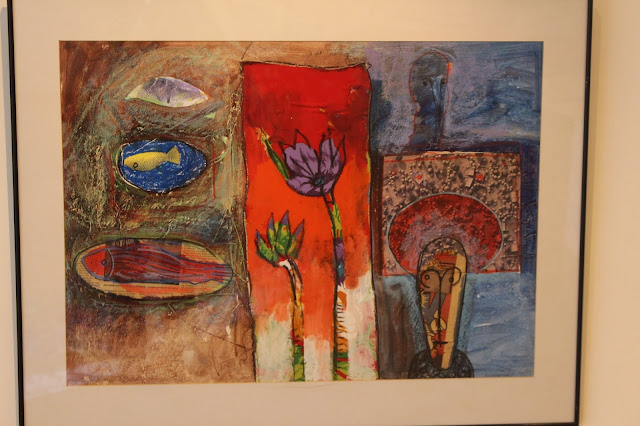 In the mid-`1990s Nairobi saw a stream of Sudanese artists arrive and land at Paa ya Paa Art Centre. Most of them were accomplished artists who had graduated from Sudan University’s College of Fine & Applied Arts. They included artists like El Tayeb Dawelbait, Yassir Ali, Elmur Salah, Salah Ammar and Abusharia Abdul. 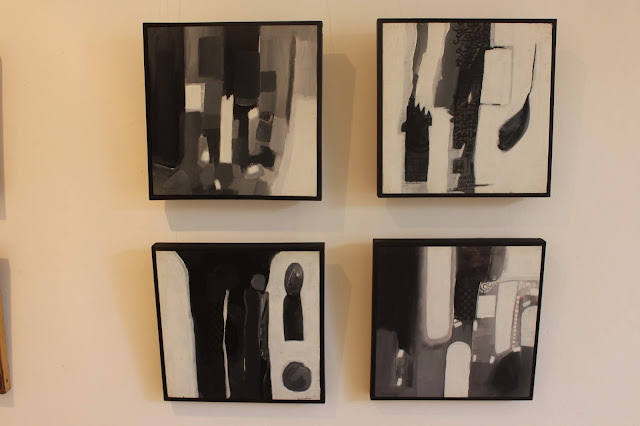 Abusharia first came in 1994 and stayed as a PYP artist-in-residence for three years. He came humbly, with just a back pack and a few art materials, recalls Phillda Njau, who exhibited one of his early works during PYP’s recent Silent Art Auction.
It was Hellmuth Rossler-Musch who first met Abusharia in 1995 and apparently fell under the artist’s artistic spell from then until now. That’s one way of explaining how Hellmuth just mounted a one-day exhibition at his Red Hill Gallery filled with the magical artworks of one of the most prolific Sudanese artists who once lived and thrived in Nairobi. 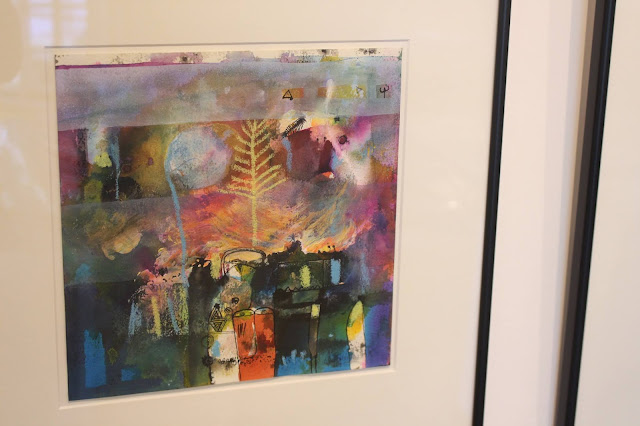 ‘The Collection – 1995 –2015’ is a solo exhibition of nearly 40 artworks by Abusharia. All but five of them belong to Hellmuth who is not only an avid art collector and gallerist. He is also a wonderful curator who hung this exhibition with loving care and beautifully proportioned thought. What’s more, the forty are not the totality of Hellmuth’s collection of Abusharia’s art. But it’s sufficient to confirm that the 52 year old Sudanese painter originally from Omdurman is a marvelous modernist artist who manages to blend elements of his indigenous culture with Western influences to create a wholly unique and identifiable style. 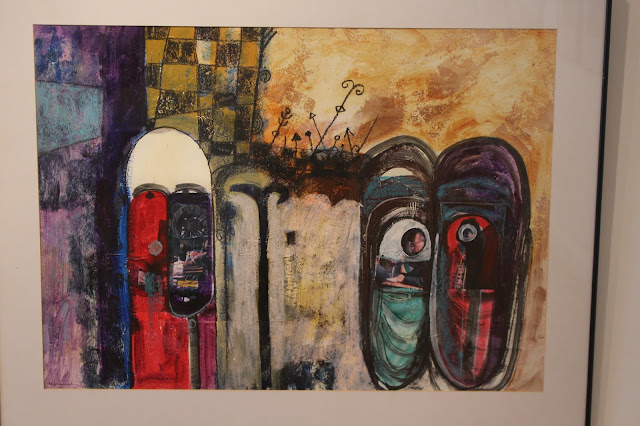 Hellmuth began acquiring Abusharia’s art in 1995 but the collection actually includes one painting from 1993 when the artist was still based in Khartoum. His works are most recognizable for his exquisitely blended use of colors which is often combined with iconic images from his home.
But even when he experiments with various colors, or even with just one color, he has a special something that has to do with the quality of his brushwork and his harmonizing of shapes that invariably leave one calmed by their beauty and satisfied even when one doesn’t see some profound social statement in his art. 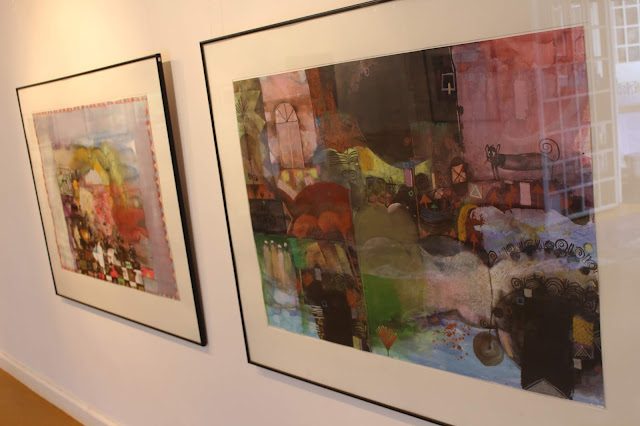 Often working in mixed media, this exhibition reflects a wide range of techniques and multimedia. He often paints with watercolors on paper. But then he also has works conceived with acrylics on canvas or plywood. The largest painting in The Collection is primarily created with oil paints and it is darker than all the rest. Nearly half the piece is almost black although blended with hues of blue and cloudy grey. It’s a somber work with the dark side counter-balanced with iconic Sudanese designs and one forlorn face. The face might be that of the artist who says he prefers that his art contributes to peace of mind as well as peace in the world and particularly peace in his homeland Sudan. 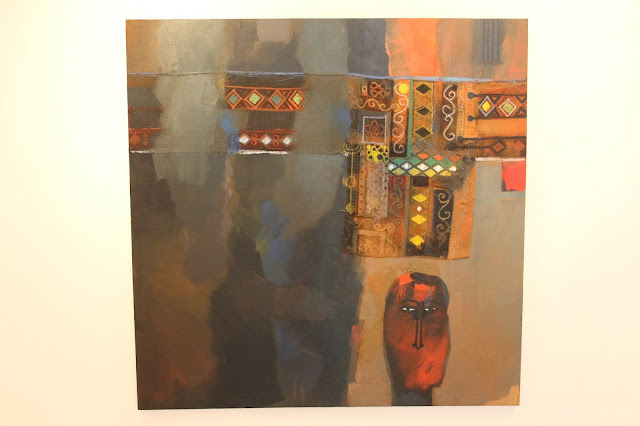 But black doesn’t only signify sadness for Abusharia. He’s got several beautiful black and white works in this show. One is of a charming city filled with a geometric style of architecture, and walls made of mud. Each house seems aglow with an inner light that makes the painting luminous despite its being all black and white. 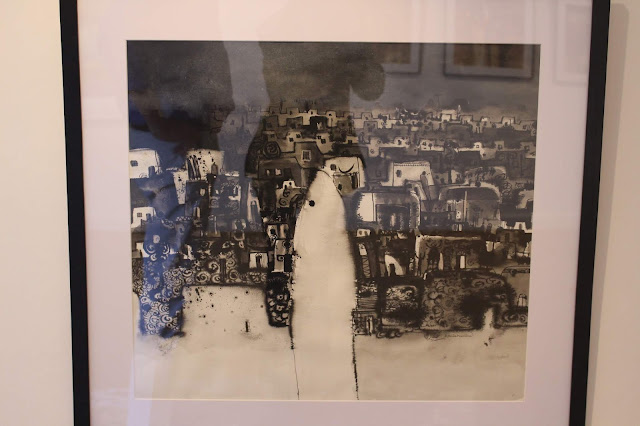 Abusharia currently lives in Kampala but he came to Nairobi especially for the opening of Hellmuth’s show. He was delighted with all that he saw, especially as he hasn’t had a solo exhibition in Nairobi for quite some time.
Abusharia’s artworks have been exhibited and collected all over the world. 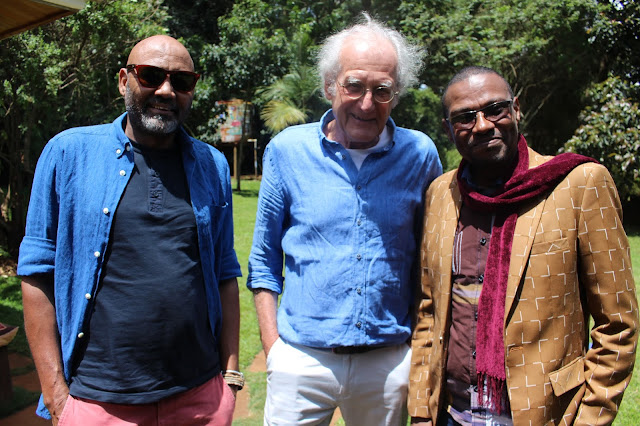 Posted by Margaretta wa Gacheru at 08:19