Nairobi rarely has a chance to see artworks by Tanzanian artists apart from Elimo Njau’s marvelous Murang’a Murals which are permanently situated at the resident Anglican church in the centre of Murang’atown.
But this past weekend at Kuona Artists Collective (formerly Kuona Trust), nine of the ‘14 artists+’ group from Dar es Salaam exhibited their artworks out in the open air during Kuona’s monthly Open Day. Their presence reflected the same sort of collaborative spirit that one has seen growing among Nairobi artists of late. It was apparent on Saturday as artists from Brush Tu Art Studio, Maasai Mbili and a multitude of independent artists came to enjoy the day (which playfully extended into the night). 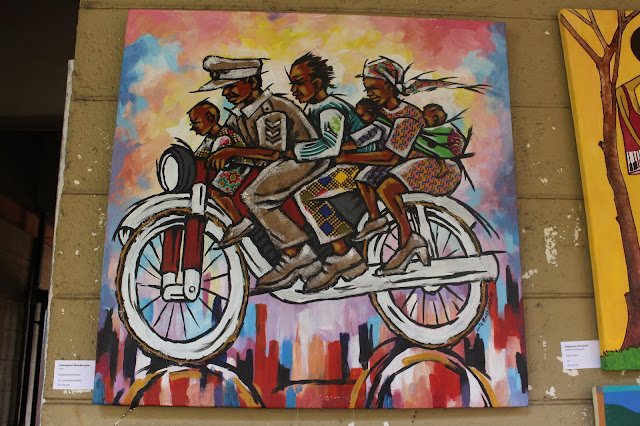 The Tanzanian group, which was originally organized by Lutengano (‘Lute’) Mwakisopile and Chilonga Haji, came to Kenya for not just one but two exhibitions.
“We’d come to Nairobi to take part in the Affordable Art Exhibition at the National Museum,” Lute explained, alluding to the annual Kenya Museum Society show that attracts literally hundreds of artists’ submissions for possible inclusion in this popular show which transpired the last weekend in October.
“But we’d been talking to Kuona for quite some time about coming to exhibit here, so this was perfect timing,” added Lute who is Chair of 14 artists+ and the one who first approached Haji with the idea of forming a more activist artists’ collective.
“We initially started with just the two of us, but now more than 14 artists want to be part of the group, which is why we call ourselves 14+,” he said.
Most members of 14+ have been regularly represented either through Nafasi Art Space (which is where Lute has previously exhibited) or through the Vipaji Foundation (which is true of Haji). But artists like Lute and Haji were wanting more than what the galleries had to offer. Lute says they want to organize more artists’ workshops, get connected to more art residencies and generally access more information related how they can grow artistically. They realized that artists had to manage their own affairs and not wait for the galleries to do things for them. That’s how they decided to organize and register their collective.
“Our idea of starting 14 artists+ was basically to promote art both inside and outside of Tanzania,” said Haji, adding that one big hurdle that artists face in his country is that art isn’t taught in schools so local people don’t fully appreciate its value.
Their situation is similar to that of artists in Kenya in that art is also not an examinable subject in schools. However, Kenyan artists like those who are part of collectives like Kuona, Brush tu, M2 and even the Kenya National Visual Artists Association (KNVAA) have also seen that the best way for artists to get what they want and need is to come together and do it themselves.
Among the nine who came for both exhibitions and showed their works during Kuona’s Open day were Mosses Luhanga, Thobias Minzi, Masoud Kibwana, Vita Malulu and Happy Robert as well as Abuubakar Chikoyo, Ramadhani Mabera, Chilonga and Lute. Three more 14+ artists whose works were shown on Saturday despite their not making it to Kenya were Cuthbet Semnguja, Agnes Kosam and Liberatus Kagere.
Most of their artworks were either realistic, such as the wildlife paintings by Luhanga and Mabera, or portraits like those of Minzi, Happy and Kosam or social scenes such as those by Malulu, Semnguja, Kibwana and Mwakisopile. Only Chilonga’s works were semi-abstract and more impressionistic. Malulu’s art was almost anthropological in his artistic interpretation of indigenous culture.
The only overtly political statement made artistically was by Mwakisopile. His was a hands-on call for freedom of expression. Kibwana’s making of canvas on canvas collages was interesting as was Minzi’s portrait paintings on wooden planks.
One of the best features of Kuona’s Open Day was the discovery that Maasai Mbili’s collective has branched out into music. Their band performed Saturday, combining traditional instruments with hip hop and rap, performed by rappers Black Odhiambo and Morocco. Virtually all the members of M2 performed instrumentals and some vocals, including Gomba Otieno and Chakara.


Posted by Margaretta wa Gacheru at 00:57