NAIROBI, A VISUAL ARTS HUB WHERE ARTISTS EXHIBIT ALL OVER TOWN 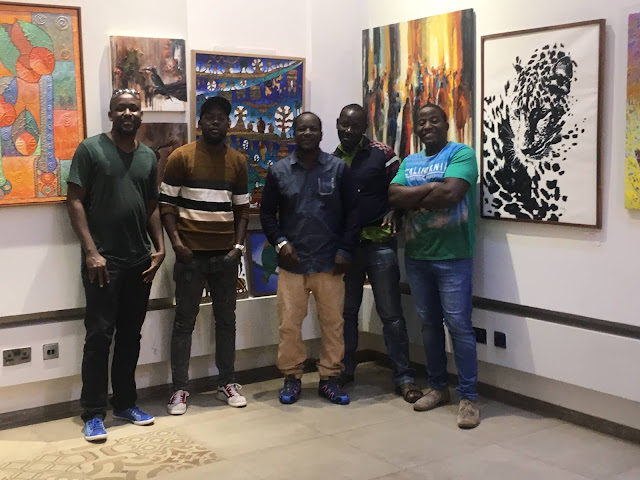 There are grounds for claiming Nairobi has become the visual arts hub of East Africa. What else could it be, given that just last weekend, it was Tanzanian artists who came to exhibit at Kuona Artists Collective in Hurlingham. This week, it’s Ugandans who are at Village Market filling exhibition halls on two floors with a rich and varied array of artworks. 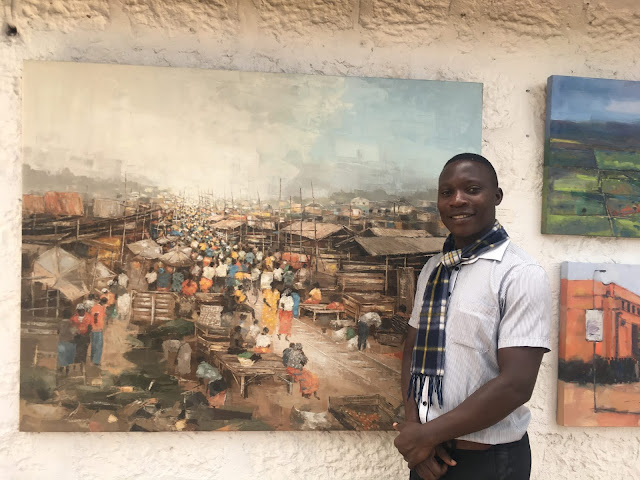 There’s another Ugandan, Ishmael Kateregga exhibiting at Polka Dot Gallery alongside Kenyan artist, Coster Ojwang. Then too, currently at Red Hill Gallery and running into the New Year, the Sudanese painter Abusharia Abdul has stunning artworks on show which he created between 1993 and 2015. And later this month, there’ll be Zimbabwean artists at Circle Arts Gallery in Lavington.
At the same time, Kenyan artists have also been exhibiting all over Nairobi. At Kobo Gallery, Nairobi National Museum, Polka Dot Gallery, Dream Cona at Uhuru Garden and even in Karura Forest where the Bizarre Bazaar’s pre-Christmas fair had artworks as well as crafts for sale. 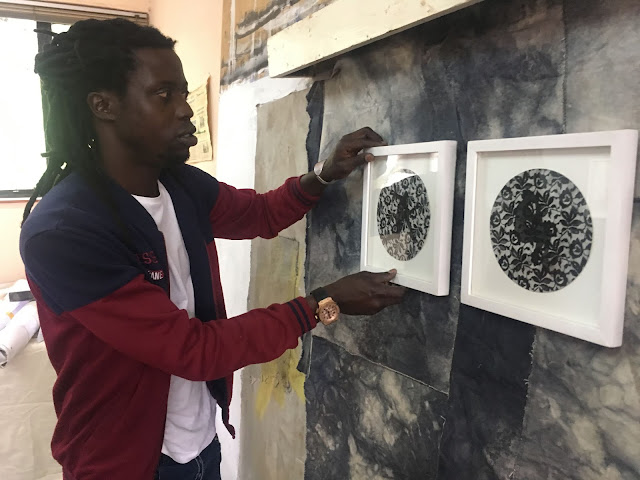 In the meantime, we are also pleased that a number of Kenyan artists were recently exhibiting in Nigeria, at XArt in Lagos. It confirms that all over Africa, contemporary art is alive and thriving.
Previously, when art critics referred to ‘African art’ they were either speaking of West African art or pre-colonial so-called ‘tribal art’ that mostly came from West or Central Africa.
But now, it’s East African artists who are making a splash, exhibiting all over the world, with especially Kenyans’ artworks being shown everywhere from Cape Town to Cairo and Chicago as well as in Paris, London, Lagos and even Washington, DC. 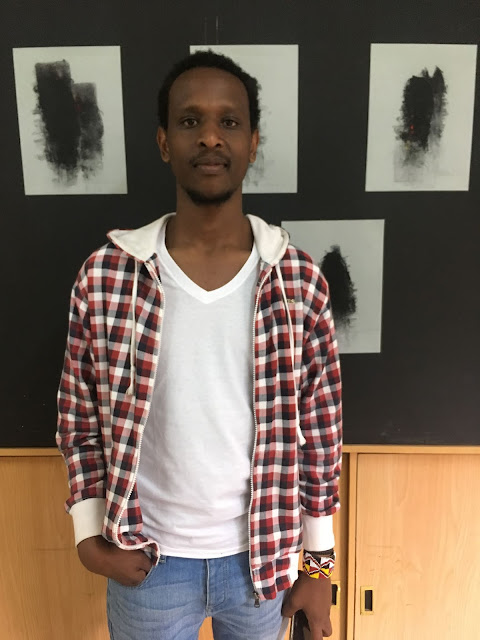 Right now, it’s the Ugandans who have taken charge of nearly all the art space in Village Market. It’s a joy since these ten artists’ works literally throb with vibrant colors and lively imagery that befits the title of their exhibition, “African Life, Culture and Traditions.”
The top floor show is an easier array to handle since it’s mainly filled with artworks by two marvelous painters. The works of Paul (aka ‘Kaspa’) Kasambeko have often been shown at Banana Hill Art Gallery. But at Village Market, one has the chance to see a much wider variety of his works which are not only figurative but impressionistic and semi-abstract. 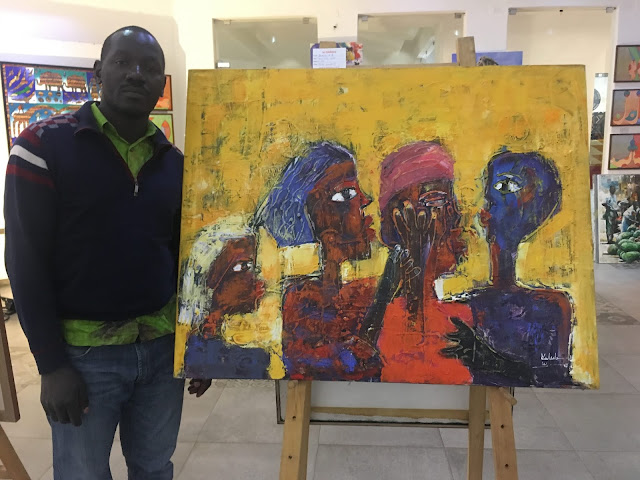 Alongside Kaspa are works by a relative newcomer to the Nairobi art scene. Damulira Shira is one of the dozen Ugandans who has his paintings both upstairs and downstairs where the majority of these prolific painters are displaying their works. Shira’s other distinction is that he’s one of the few Ugandans at Village who’s been fortunate to attend the Margaret Trowell School of Art at Makerere University. It shows in his art. 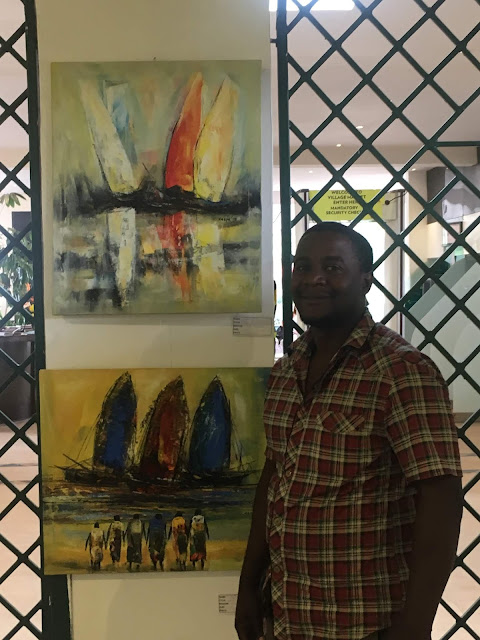 Kaspa
But what’s so surprising about the other Ugandans whose art is displayed on the floor below Kaspa’s and Shira’s is that virtually all of their paintings are appealing and frankly, visually addictive. One is tempted to think there’s something in the water they all drink or in the air that they breathe. But it certainly seems that even the so-called ‘self-taught’ painters among them have been blessed by an osmosis that comes from living in such close proximity to East Africa’s first and most formidable educational institution of art, at Makerere.
Among those exhibiting in that second floor hall are Anwar Sadat, Herbert Kalule, Ronnie Tindi, Sebandeke and Shira (all of whom are there in person this week) as well as Ibrahim Muwanga, Cliff Kibuuka, David Kigozi, Jjuuko Hoods and Kenyan artists Adrian Nduma and Sam Njuguna. 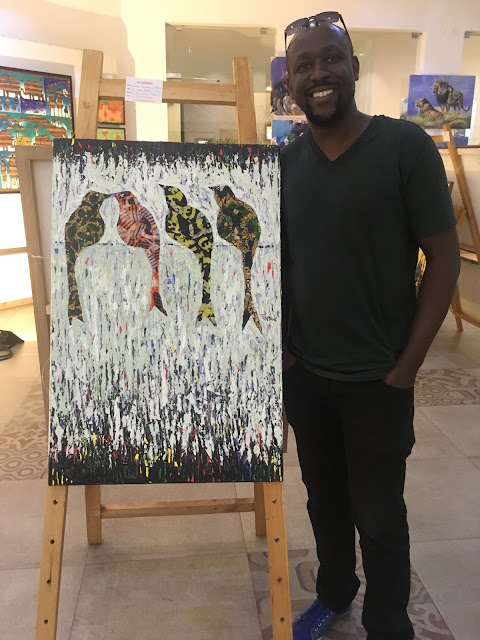 Ronnie Tindi
When I note that nearly all the Ugandans haven’t had a formal art education, I think this show is one of the clearest illustrations of how informal mentoring can be the most effective way to bring up brilliant young artists.
For example, there are three blood brothers currently exhibiting at Village, namely Jjuuko, Anwar and Sebandeke. All paint beautifully with refined technique and highly individualized style. One would never know from their art that they are related by blood. But the fact that they have rubbed shoulders and probably learned the basics of painting from one another suggests that their ‘home schooling’ has given them a lot of knowledge, experience and inspiration. Their passion for painting is also apparent as it is among all the artists involved in ‘African Life, Culture and Traditions’. 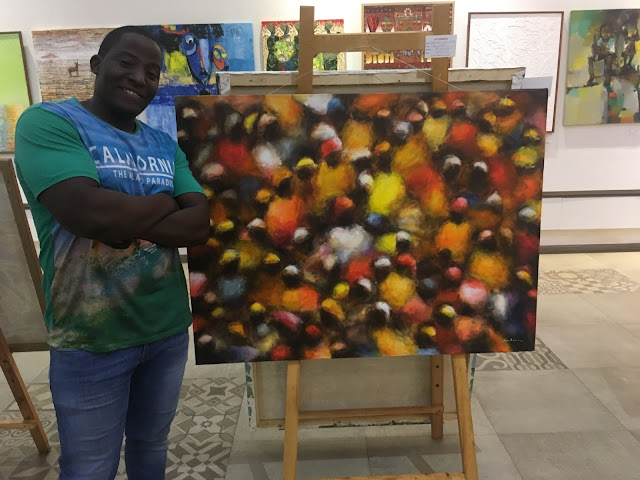 So artists are busy showing off their latest works, finding spaces to exhibit all over town. 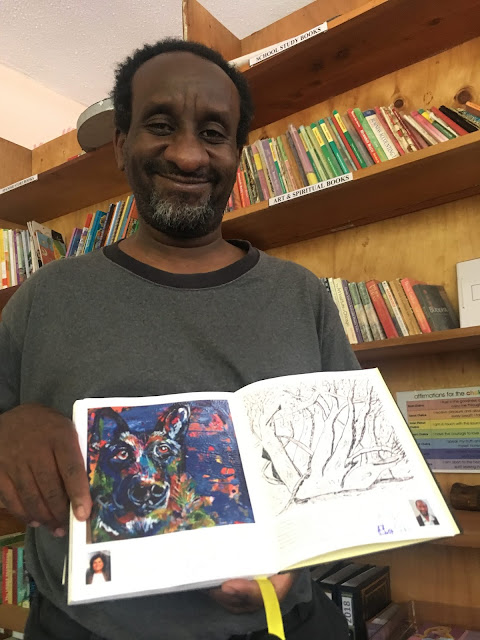 Eric Gitonga is exhibiting his art in the new Kenya Arts Diary 2019
Posted by Margaretta wa Gacheru at 05:16