AT THE CHANDARIA'S EXOTIC AND INDIGENOUS PLANTS MINGLE 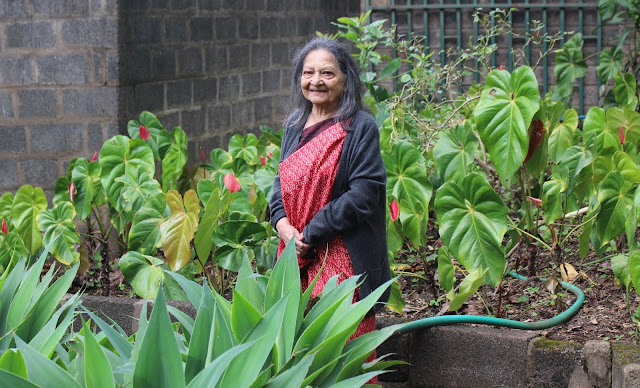 While Aruna Chandaria may be married to one of the biggest industrialists and philanthropists in Africa, this award-winning gardener is also a powerful force in her own right.
Co-founding the Chandaria Foundation with her husband Manu almost 60 years ago, Aruna prefers keeping a low profile. But ever since they moved in 1969 to Muthaiga, into the home of the former Cabinet Minister Bruce McKenzie, she has been a masterful home-maker and dedicated gardener.  She’s also an author, having compiled ‘The World of Rice: 101 Delicious Recipes’, and a craftswoman whose tapestries adorn multiple walls in her beautiful home.

But it’s the garden, including her three greenhouses, that have given her the highest public profile since she’s won a myriad of awards over the years, for both her flowers, especially her orchids and also from her tasteful floral arrangements.
“I studied at the Sogetsu School of Ikebana in Japan,” says Aruna who’s a qualified teacher of this age-old Asian art. Having made several trips to Japan over the years, she also learned the art of creating and caring for Bonsai trees. She has a number of these graceful miniature trees doing well in one of her green houses. 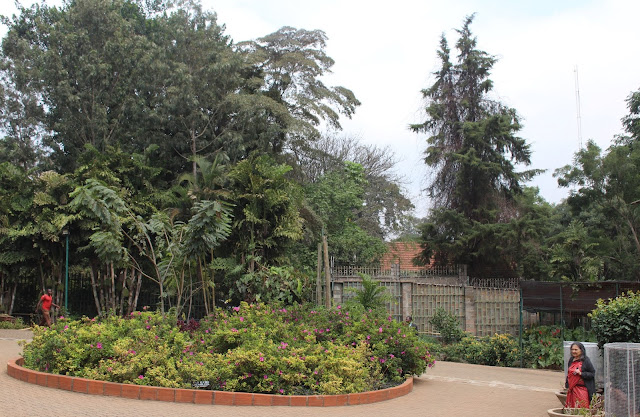 The green houses are where most of her orchids are coming into bloom. “Unfortunately, this is not the season for most of my plants to be in bloom,” she says, adding that October is a better month to come back and see the garden in its full glory.
Nonetheless, Aruna’s five-acre garden is a showcase of greenery and glowing colors that makes a walk around the grounds a glorious opportunity to see both indigenous and exotic plants, shrubs and trees. 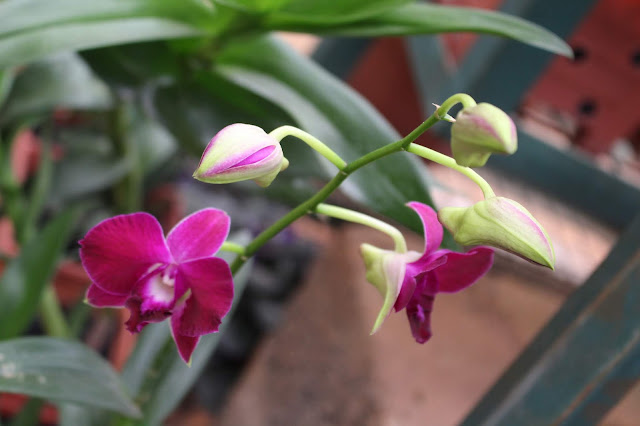 “As we have traveled [extensively] over the years, I have managed to pick up plants in many countries,” says Aruna, recalling how she has gotten permits to bring in exotic plants from Singapore, Malaysia and Holland as well as from Australia, India, New Zealand and elsewhere. 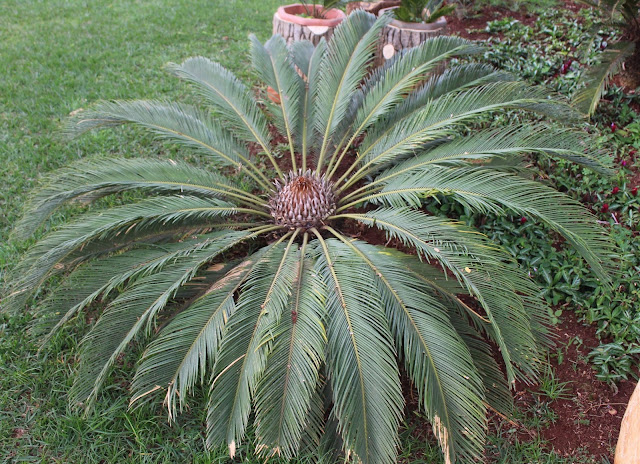 “I even have one from the Belgian Ambassador who I used to share cuttings [from the garden] with; and then he shared one of his Belgian plants in return,” she adds.
The one shrub that never lets Aruna down irrespective of the season is the bougainvillea. “It blooms in all colors as you can see for yourself. We have ones that are orange, pink, white, red and deep maroon.” 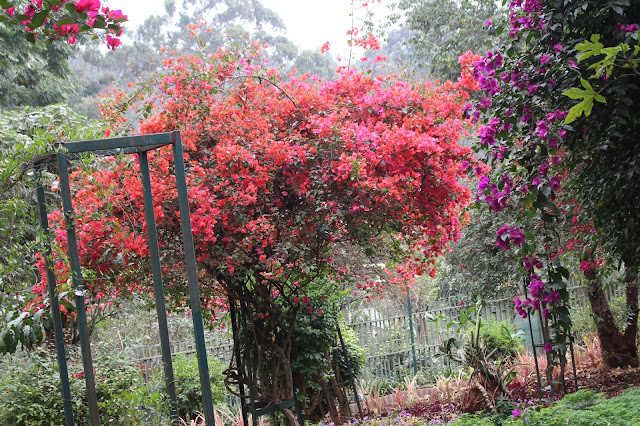 One joy that Aruna has had over the years is watching her plants proliferate. “Many of them started as just a single plant which then grew into a whole patch,” she says. That is clearly what happened with her anthurium as well as with her bougainvillea, honeysuckle and the monstera deliciosa (or ‘swiss cheese plant’) that she was given by a friend from Latin America. 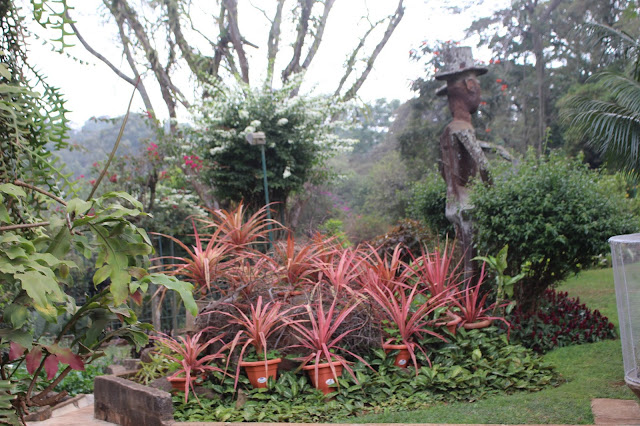 One of the oldest areas of the Chandaria’s lush green grounds is the rock garden which Aruna says she and Manu designed together soon after they bought the house half a century ago.
Filled with several boulders and many rocks that are laid down in geometric patterns, the rock garden also features a gushing waterfall that flows into a pond filled with water lilies, bamboo; and just beside the pond, Aruna’s planted a bottlebrush tree. 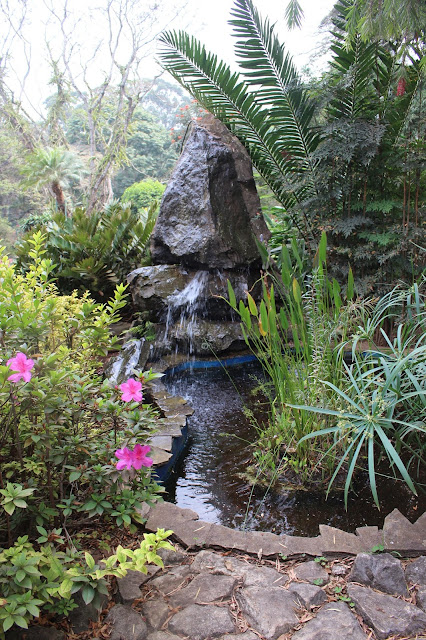 The bottlebrush is another tree that has retained its bright red flowers during Nairobi’s cold ‘winter’ months unlike other plants at the Chandaria’s that behave more like her ‘Touch me not’s’. These are sensitive shrubs that fold up their leaves and droop when touched as a means of protecting themselves. 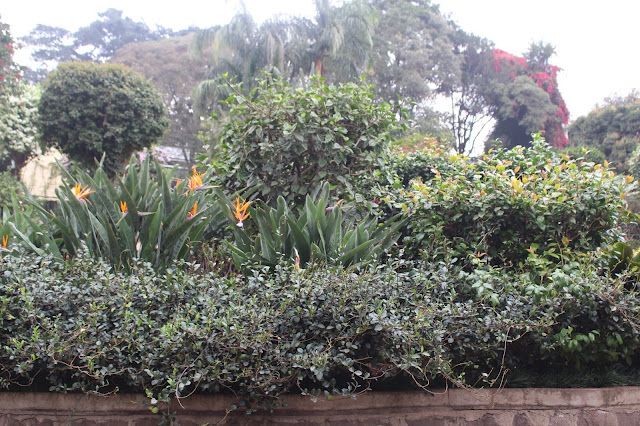 Aruna has the patience to wait for the warm weather when all her flowers bloom and bask in the equatorial sun. However, the one thing she has no patience for are the monkeys that like to come and eat her orchids. “That is why we have had to cover them in [cage-like] mesh so as to keep the monkeys out,”
Otherwise, Aruna has spent many years sharing her garden with family, friends and guests who come from all over the world to meet her family and walk with her around the garden. 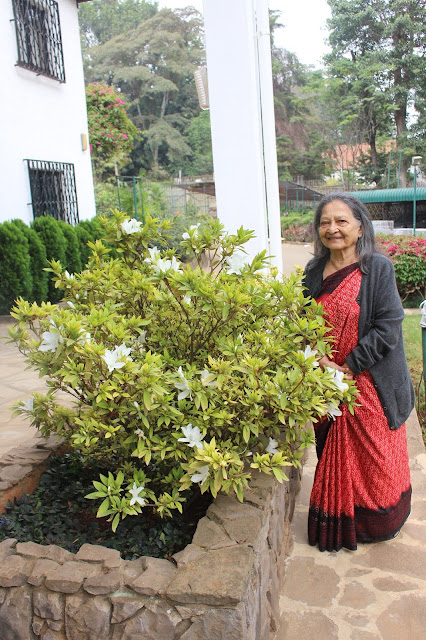 Nowadays, she is not quite as hands-on a gardener as she was in years past. Even so, she walks the grounds early every day and gives instructions to her staff who help her maintain its well-tended look. 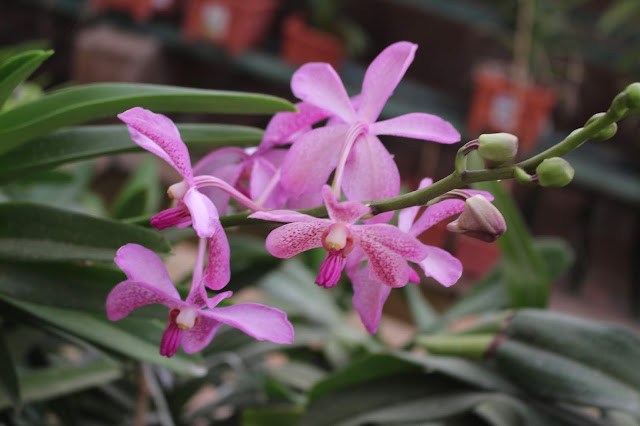 She adds that they are vigilant, even when she’s away either visiting her children and grandchildren in Europe and the States, or traveling with her husband for the Chandaria Foundation, one of the oldest philanthropic organizations in Africa. 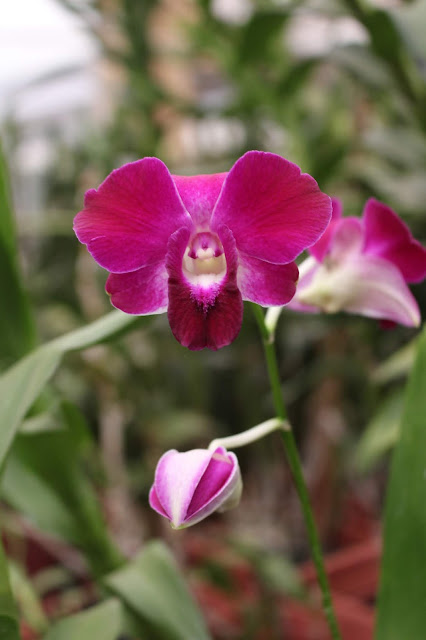 Posted by Margaretta wa Gacheru at 12:13