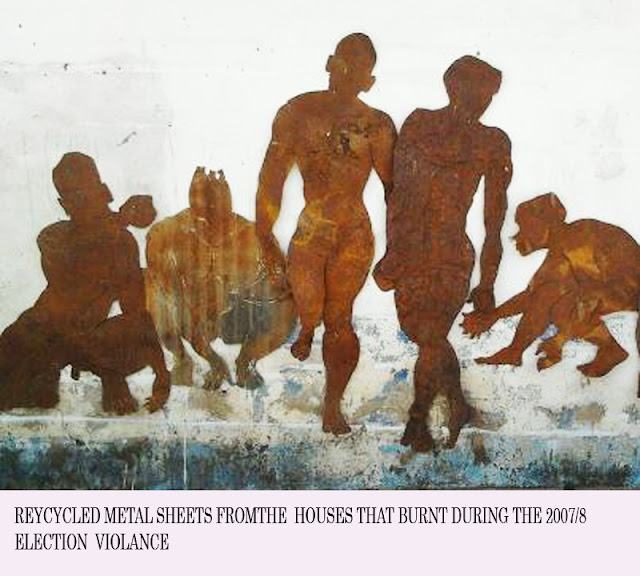 Patrick Mukabi, the Museum's master mentor takes his art all over the country and the world

The Railway Museum used to be the place to go to learn about that important element in Kenyan history, the establishment of the so-called Lunatic Express that went all the way from Mombasa to Kampala, passing through Nairobi.
But nowadays, the best reason to go to the Railway Museum is to discover what’s happening among a myriad of young Kenyan artists and some not so young. It started several years back when Remy Musindi got together with two other Kenyan artists, Frederick Mbugua and Evanson Kangethe, to establish the Nairobi Railways Museum Art Gallery. That lasted from 2012 to 2015. By then, several other artists, among them Moses Nyawanda , Peter Ndirangu, Samuel Githinji, Lia Berhane and Stephen Njenga among others had found space across the way from the Museum and set up the Railway Art Studio. 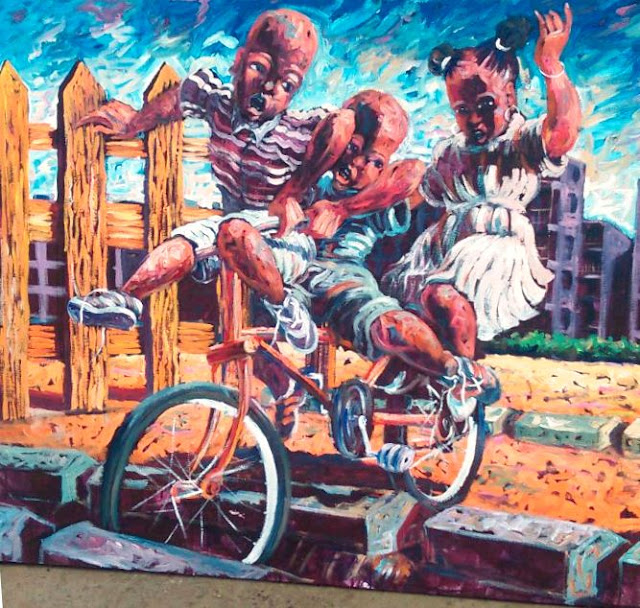 But once the Museum Gallery was free, coincidentally Patrick Mukabi had decided to move out of The GoDown Art Centre where he’d been based since it first started in the early 2000s. That is how he ended up moving into the Gallery space and setting up Dust Depo Art Studio. 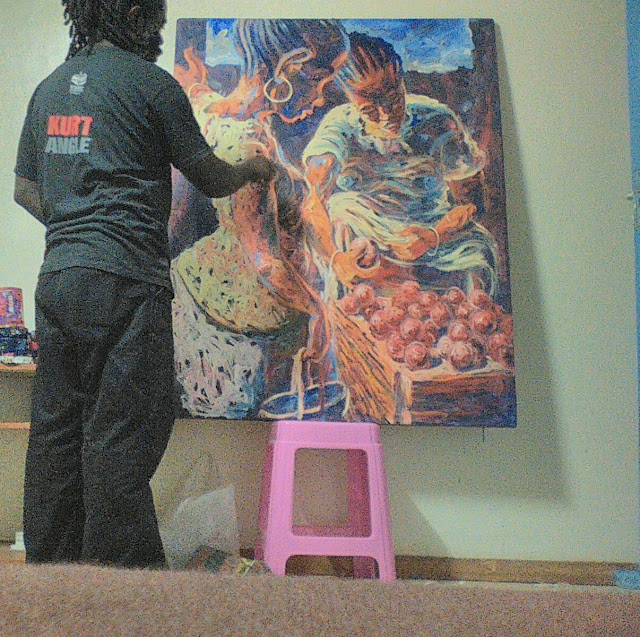 From the beginning, Patrick was not alone. He had been mentoring young aspiring artists at the GoDown, many of whom chose to also shift and stick with him. Quite a few of them have learned what they needed from him and moved on to establish themselves in their own right. Among them are artists like Nadia Wamunyu who is now based at Kobo Trust, Mike Kyalo who now paints in South B at the Mukuru Art Club, Joan Otieno who works at Kariobangi North at Warembo Wasanii which she founded and Eric ‘Stickky’ Muriithi who is still with Patrick at Dust Depo but also operates independently. 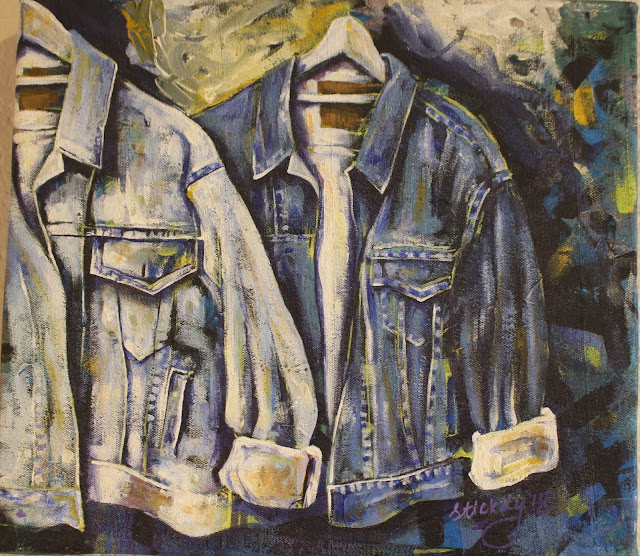 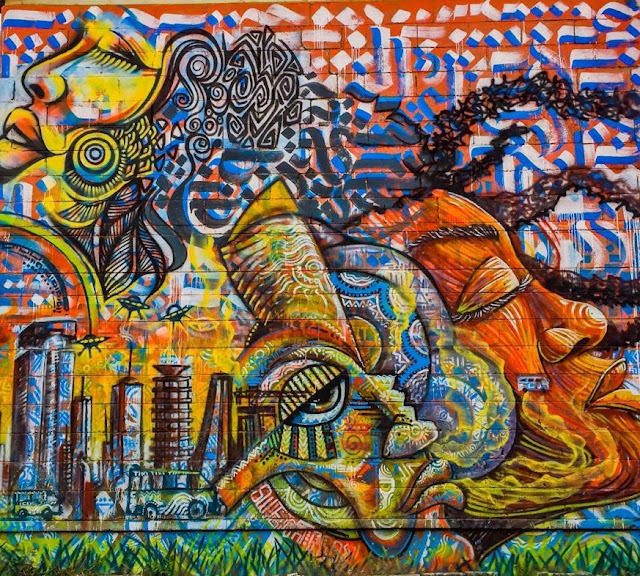 BSQ graffiti artists also got their start at Dust Depo. Now they have their own train car studio

The great thing about Mukabi as a mentor is that he never holds on to artists who have benefited by his guidance. Nor does he claim accolades for influencing so many artists’ life opportunities. It is clear however that countless Kenyan artists who have been mentored by him have become both artistically and financially self-sufficient. In other words, Patrick, who is also known as Baba Supaa to TV fans who used to watch his children’s art classes on the ‘Known Zone’, is a born ‘mwalimu’ teacher.
Speaking to him recently at Dust Depo, Patrick says he currently has about 20 artists regularly working there. But in all, including those who come and go, depending on their classes and other responsibilities, he has around 50 mentees or students whom he shepherds into the world of fine art. 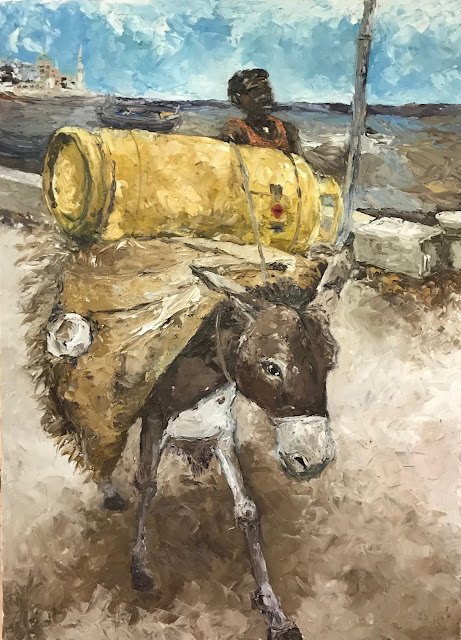 Nadia Wamunyu is also a former mentee of Mukabi. This is her Lamu donkey

In fact, his teaching style is so genial and effortless that Patrick is invited to many schools and art centres, both locally and abroad, to teach. “I have been to around 20 countries where I have taught and also exhibited,” says Patrick. In Kenya he’s taught everywhere from refugee camps to schools like Brook house, Braeburn and Hillcrest to Hotels like Dusit D2 and Malls like the Hub.
One has to wonder when he finds time to do his own art since he gives so much of his to others. “I usually paint early in the morning or late at night,” he says in his understated style.
He works in a wide range of media, from charcoal and ink to acrylic paint on canvas and paper collage. Best known for his portraits of beautiful buxom market women, he also is known for his anatomical accuracy as witnessed in his PEV series of nude warriors entitled ‘Siasa mbaya Maisha mbaya.’
Patrick is also among the first Kenyan artists to paint a series of clad-less women whom he had advertised for. He had invited women of ample sizes who felt comfortable being painted in the nude to contact him. A number did and those portraits are remarkable in their own right. But they were sadly censored from being shown at
Nairobi National Museum’s Creativity Gallery, an event that stunned many observers who did not think censorship of art was appropriate or fair. 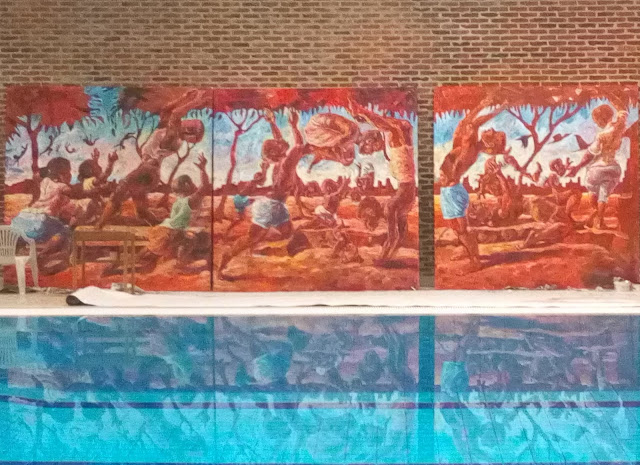 Mukabi makes art all over the town, country and world


Posted by Margaretta wa Gacheru at 02:21