Barack Obama wasn’t born in Kenya, contrary to the fake news story circulated by members of the American ‘Birther’ movement, reportedly founded by the now US President Donald Trump.


But the senior Obama was born here in Kogelo, Siaya County as practically every Kenyan knows well. That was sufficient grounds for the American designer and architect of the African Heritage House, Alan Donovan to ‘gift’ his home (which doubles for a Pan-African art museum) to Obama Junior and his wife, Michelle.


Mr Donovan is not selling African Heritage House to the Obamas, he told Saturday Nation soon after his return from the US. He admits he’d thought long and hard how to ensure the preservation of both his house and all its priceless Pan-African art and artifacts, textiles and jewelry. So when he heard the Obamas were looking for the appropriate place to establish the Obama Library, he recalled the ‘dream’ the former Kenyan Vice President Joseph Murumbi had shared with him shortly before the two men co-founded the African Heritage Pan-African Gallery in 1972. 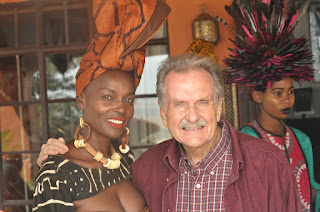 “Joe told me he’d dreamed of establishing a Pan-African research institute and gallery where artists from all around the region could come to exhibit as well as study, create and research the arts of Africa,” Donovan said.


The African Heritage House covers the gallery side of Murumbi’s dream, given it contains art and artifacts that Donovan personally picked up while traveling multiple times around the region for AH Gallery. But if anyone could understand the need to establish a Pan-African art institution, it would be the former US President who’d also been the first African American to attain that high office.


So while he was recently in the US, he stopped off in Washington, DC and met with members of the Obama Foundation who confirmed Barack was delighted with Donovan’s ‘gift’.


“They said [Obama] had read everything he could find about African Heritage House and plans to come to Kenya with Michelle next June especially to see the house,” said Donovan whose home has been described as “the most photographed house in Africa.”


The house, both the edifice and the interior, are unique as they reflect the past 50 years of Donovan’s life in Africa. He will officially be celebrating that half-century milestone from October 1st (coincidentally Nigeria’s National Day) when he will not only launch his second Nigerian Festival (the first in 1972), an event anticipated to be a cultural extravaganza the kind for which African Heritage has historically been recognized, not only in Kenya but also in Europe, the US and South Africa.


He will also be celebrating the 50th anniversary of Nigeria’s renowned Oshogbo artists’ community which was founded back in 1967 by the German Africanists Ulli and Georgina Beier and Austrian artist Suzanne Wenger, together with Nigerian artists like the late Twins Seven Seven, Jimoh Buraimoh and Nike Seven Seven Davies Okundaye who at the time was Twins’ third wife.


Oshogbo has been recognized globally as one of the central seats of Nigerian (and specifically Yoruba) culture ever since then. It’s a place that’s spawned not only visual artists but poets, playwrights, dancers, acrobats and Adire cloth quilt-makers.


Oshogbo is also where Nike has a workshop where artisans are busy reviving cultural traditions which were otherwise threatened by Western culturally homogenizing trends that have destroyed so many other rich African traditions.


It is from her workshop as well as from her vast Centre for Arts and Culture in Lagos that Nike sent Mr Donovan more than 100 works of art from Oshogbo artists, all of which will be on display during the Festival, which will be held across the city, at Nairobi National Museum, Nairobi Gallery and at the Alliance Francaise.


Nike herself will also be on hand for the Festival opening and to give talks on Oshogbo and her own artistic work. Her exquisite batik art (which is largely inspired by Yoruba religion and folklore) as well as her Centre have made her one of Africa’s most internationally acclaimed female artists.


Nike will be accompanied by one other Oshogbo artist, Jimoh Buraimoh who took part in Donovan’s first Nigeria Festival. His art will be exhibited together with works by Twins Seven Seven, Bisi Fabumni, Jacob Afolabi, Folorunsha Olatunde and his deceased father Asiru Olatunde, the late Rufus Ogundule, and Nike of course.


At the same time, the other award - winning Nigerian artist (possibly the best known of all), Bruce Onobrakpeya will also be present for the Festival opening together with his art. Bruce is acclaimed for his printmaking, painting and sculpture and has exhibited everywhere from the Tate Modern in London and the National Museum of African Art in Washington, DC to the 44th Venice Biennale and the National Gallery of Modern Art in Lagos.


But all of those shows may well have taken place after Bruce first came to Kenya in 1972 when che and Jimoh were the only Nigerians exhibiting in Nairobi.


Donovan has kept in close touch with all of these artists whose works he got to know well while working in the late Sixties for the USAID in Biafra during that terrible secessionist war. Having studied African art and journalism at UCLA, he’s played an unsung yet pioneering role in appreciating and promoting contemporary African art.


Joseph Murumbi recognized that talent back in 1969 when he first met the man who was exhibiting his collection of Turkana material culture at the now defunct Studio Arts 68. Murumbi had left politics by that time and had become an avid African art collector. For that reason, he requested that Donovan return to northern Kenya where he’d personally collected the Turkana artifacts that he’d brought down to Nairobi for his first exhibition.


Murumbi sent him to collect a duplicate collection of Turkana artifacts, knowing they would one day be precious and important works of indigenous Kenyan culture.


The bond between the two men grew from that point on, up until Murumbi’s death in 1990. But their mutual appreciation and vision enabled them to expose the beauty of contemporary African art, of the kind that the Nairobi public will have the opportunity to see throughout October.


Posted by Margaretta wa Gacheru at 07:52