NGUGI IN THE 70s AT UNIVERSITY OF NAIROBI 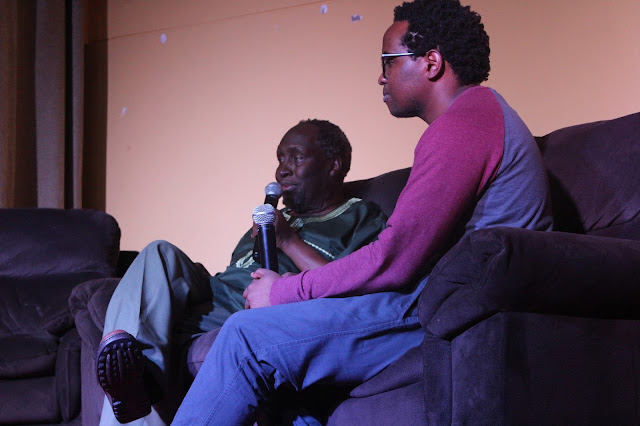 The day after I arrived in Kenya, I had my first encounter with Ngugi wa Thiong’o. I had recently won a Rotary International ‘Ambassadorial Fellowship’ to study at the University of Nairobi for a year. So I’d gone to new students’ orientation at the Education Building Theatre 2 to hear the Chairman of the Literature Department speak to us newcomers. I stood way up in the back of the large room and listened to one of the most inspiring lectures I’d ever heard.


The room was packed but I felt Ngugi was speaking to me directly. He spoke passionately about the need for all of us to see ourselves as writers who would tell Kenyans’ stories. He spoke as if he knew what he was saying and knew all of our potential to do the work required to create a body of literature that could equal or exceed that of canonical European writings.


Just years before, Ngugi had spearheaded a cultural revolution at the University when he with others insisted on the transformation of the English department into a Literature department that was not Euro-centric as the English department had previously been but Afro-centric. And more precisely, the core course would be Oral Literature which would include every student going out and interviewing elders who had oral traditions and stories of early Kenya to share. From there the curriculum would expand in concentric circles: it would go from oral to Kenyan lit, then to the study of South, West and North African and finally to literature of the Black Diaspora and the rest of the world.


Ngugi’s words that day lit a flame in my soul that has never died. His conviction about students’ creative capacity made me hungry to listen to more of what he had to say and share. But when I went to his office and asked that I be admitted to his department, he refused me. I discovered that Ngugi could be hard core. In part his refusal might have been because I wasn’t a Kenyan or even an African. Plus I was a visiting student who might not be serious about literary studies. But those were not his grounds. As revolutionary as his approach to education seemed to be, he was still fixated on the British model which dictated that you couldn’t enter a Master’s program (which is what I’d wanted to do as I already had a Bachelor’s in Sociology and Comparative Religion plus a Master’s in Education) unless you had done A levels in Literature and pursued the same course for the first university degree. So his grounds for dismissing me were academic. I did not qualify as far as he was concerned. 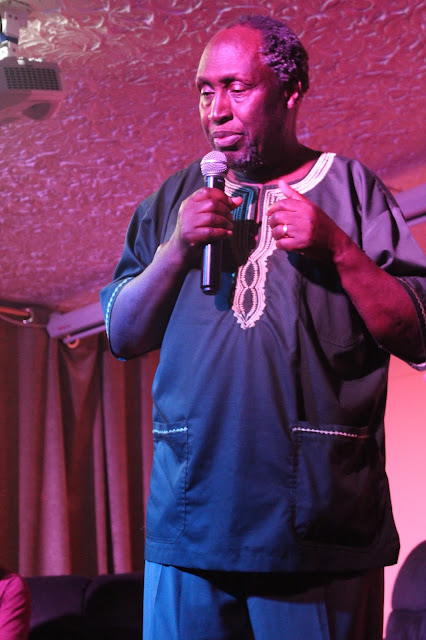 I didn’t see Ngugi for several months after that since UON students went on strike for five months. They were up in arms over some lecturer that they claimed was a racist and had to be removed from the University. So while I had that time, I read a lot of African and Pan-African literature, met writers like Okot p’Bitek, and I got up my nerve to ask assistance from Ngugi’s good friend and fellow scholar, Dr Micere Mugo who actually took pity on me.


It was thanks to Dr Micere that Ngugi relented and allowed me into the undergraduate program. That program was a three year course, but as I was committed to getting an MA from UON, I took all the subjects and all the exams in one year. That was undoubted the most intensely academic year of my life. If I wasn’t reading, I was attending classes. And I made a point of attending every lecture, seminar and tutorial that Ngugi gave. I was forever seated either at his elbow or in the front row of lectures and more casual conversations that he had with his students. I tried to be inconspicuous but at that time, (the mid-Seventies) it wasn’t very easy since I was one of the few white students in the department. 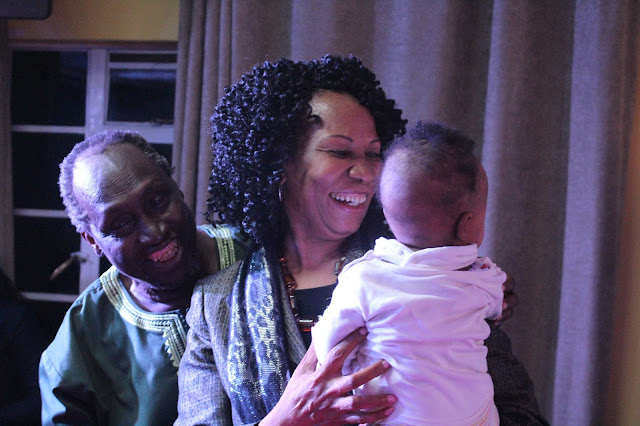 Ngugi with his wife Njeri and grandchild at PAWA 254 theatre

What I found in Ngugi was a man in love with literature, all literature. Whatever author he was teaching, be in Eldridge Cleaver or Ayi Kweh Armah, he was always encouraging us to read everything that he or she had written. He was so down to earth that he’d come to class dressed casually, like any other peasant or worker from his home area of Kamiriithu.


The other thing about Ngugi was his subtle sense of humor and irony that invariably shown through his lectures and more casual classes. He never came across as academically arrogant or proud. Instead, he struck me as one of the most humble, gentle man that I’d ever met. However, I never forgot how curt he’d initially been with me, so I chose to keep my distance even though I wouldn’t miss a single one of his lectures or sessions that he’d have in his office among other students.


Ngugi’s political perspective was never far from his analysis of literature. And as my background had been in sociology and the study of revolutionary social movements, I loved hearing his appraisal of how inherently political was culture and specifically literature. Class consciousness was always understood by Ngugi to be a component of every writer’s point of view, however latent or subtle it might have seemed. But especially when we got into African American literature with Ngugi, his literary analysis included both class and race. In other words, he was talking about a post-colonial perspective years before it was labeled to that effect.


While we were in classes, the play ‘Kimathi’ by Kenneth Watene was staged and Ngugi was clearly not impressed. He felt Watene had swallowed the British perspective on the great leader of the Mau Mau or Land and Freedom Army. That is how ‘The Trial of Dedan Kimathi’ was born. Co-created by Ngugi and Micere, The Trial was first staged in 1976, and by then, I had been admitted to the Master’s program at UON. Even so, I was still stunned when Ngugi asked me at the last minute to join the cast and play an ‘ugly mzungu’ (white colonial woman or memsaab) who sat scornfully through the trial of Kimathi. Needless to say I was delighted to do it.


The Trial had already been selected to go to FESTAC (the 2nd Pan African Arts Festival) in Lagos, but I never intended to go as I knew there would be few tickets available and they were for Kenyans. But I, like Ngugi, had caught the theatre bug and took Drama classes with John Ruganda who invited me to join the University’s Free Traveling Theatre (a whole other story) which I did. I also got to see how much Ngugi admired Okot p’Bitek who wrote poetry grounded in his own indigenous cultural traditions. ‘Song of Lawino’, I believe was initially written by Okot in his mother tongue. It was also dramatized. It wasn’t terribly long after that Ngugi cowrote The Trial of Kimathi that he began working with Ngugi wa Mirii to co-author his first Gikuyu play, Ngaihika ndeeda (I’ll marry when I want to). 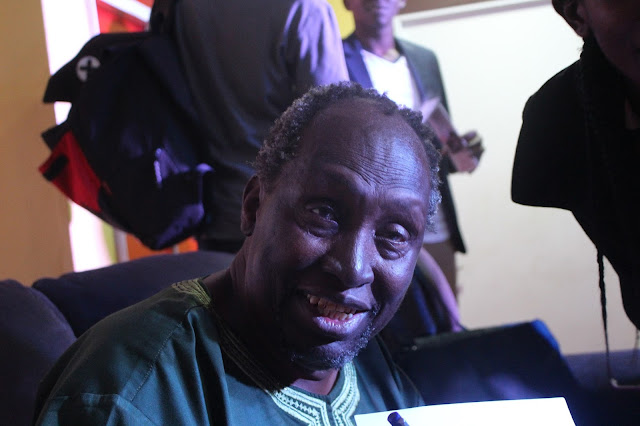 
But before that happened, I was taking graduate classes with Ngugi who happens to love Russian literature. So we got to read and talk about everyone from Tolstoy, Dostoevsky and Turgenev to Gogol, Chekhov and others. I had the privilege of presenting the first paper in the class meant to contextualize Russian literature which Ngugi understood as emerging out of conditions of 19th century Russia where peasants (serfs) and workers were profoundly oppressed and the potential for revolution was ripening. Reading and discussing this literature in seminars with Ngugi was life-transforming, and I have to say, he embodied the best qualities of a true intellectual for me.


It was later on in my life when I read Gramsci and realized that Ngugi had prepared me to fully appreciate what an organic intellectual is. It was after I’d completed my course work and had to get a job in journalism to pay for completing my master’s thesis, that Ngugi was detained. He’d recently published Petals of Blood in English, which I know was a big deal to him at the time, since he’d occasionally bemoaned the fact that almost ten years had gone by since he’s written his last novel, A Grain of Wheat. But after Petals was published, he’d rapidly gone on to formulate his perspective on writing in one’s mother tongue. And undoubtedly, he was detained for writing and producing his overwhelmingly popular production of his first Gikuyu play, Ngaihika Ndeeda. For not only was the play attracting thousands to come to Kamiirithu, to see the show Ngugi and Ngugi had directed starring a cast full of peasants and workers who’d been empowered by everything they’d learned from Ngugi about themselves, social injustice and the theatre. The play was subversive and the writer became the nemesis during those last days of Kenyatta and the early days of the civilian dictator (soon to be President) Daniel arap Moi.


I had interviewed Ngugi shortly after Petals of Blood came out, but my editor Hillary Ng’weno refused to published the interview. I gather he’d wanted to stay on the right side of the government and Ngugi had already been identified as a radical. But once Ngugi was detained, Hillary apparently had a change of heart. He immediately published my interview with Ngugi. What’s more, when a year had passed and Ngugi was miraculously released, it was Hillary who sent me to Kamiirithu to conduct another interview with the newly freed writer. But my boss had given an explicit set of questions to ask Ngugi, questions like ‘Do you believe in peasant revolution?’ Mind you, Kenya had banned Mao tse Tung several years before, so anything that smell of ‘peasant revolution’ was anathema to the government.


So what I did was give Ngugi my set of questions and ask him to fashion the questions that would elicit the answers he’d like to share with a world awaiting word from Kenya’s number one writer and recent detainee. I had the privilege of being the first journalist to interview Ngugi before the international press corps arrived on the scene. But when my former lecturer alluded to me (namelessly) in the preface to his book Detained, he clearly didn’t understand that I had risked my job to give him that open-ended platform. Hillary literally was ready to sack me as soon as he read the transcribed interview because it was obvious I had disobeyed his instructions and reconstructed Ngugi’s interview. I had never seen Hillary so livid, but it was worth it. Especially when that interview was published just as Ngugi had spoken to me.


I didn’t see Ngugi for quite some time after that. I was delighted when he left the country and didn’t come back in 1982 since the darkened days of Moi had already set in and my professor wouldn’t have survived if he’d returned to Kenya during the reign of Moi.
Posted by Margaretta wa Gacheru at 05:42