Samuel Githui has always been one of my favorite Kenyan painters. His panoramic portraits, often framed as triptychs, reveal fascinating features of Kenyans’ everyday lives.


Sadly some of his most memorable paintings, like guys on bicycles carrying crates of bread or milk, have been copied copiously by any number of local artists. Still I admire Githui’s signature style which for me is easily distinguishable from his imitators’ work.


So it’s difficult to contain my feelings for most of the work in Githui’s current solo show at Kuona Trust. Painting in abstraction is not a style I frankly care to associate with him.


His works have always had salience for me, even when he only painted donkeys sauntering along a sandy Lamu beach.


But his abstract paintings at Kuona leave me cold, so I had best not say more. Only that I hope Githui will again be inspired by the likes of Kenyan people whose everyday movements as interpreted by his brush is endlessly fascinating to me.


Meanwhile, the art of David Thuku and Longinos Nagila are an excellent choice made by Willem Kevenaar, the Dutch business consultant who’s just opened a new art space that he’s named ‘The Attic.’ 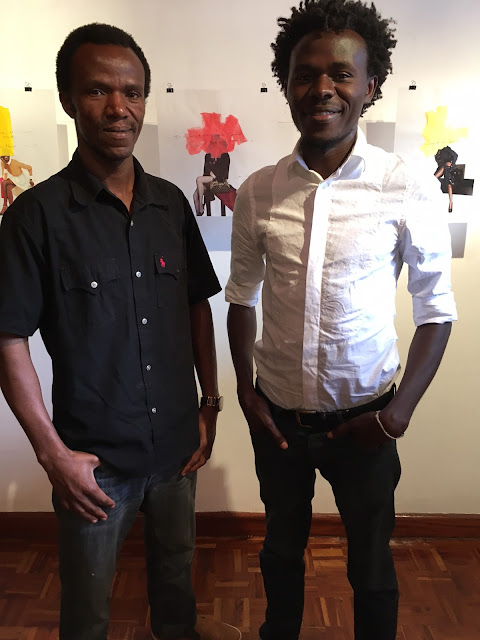 “It’s actually an apartment, but that word doesn’t slide off your tongue as easily as ‘attic’,” says Willem whose upstairs art center is not meant to be grand but already looks like a gem of a venue for artists prepared, like Thuku and Longinos, to share a few choice pieces of their art.


These two have much in common as they both work in multi-media using various techniques. Thuku, who’s one of the founders of the Brush tu Art Collective, abandons painting entirely in this exhibition. Instead, he works with paper-cuts, sgraffito, silk screen and pen and ink.


Longinos also works with paper-cuts as well as image transference with a bit of acrylic paint added for maximum effect. Altogether, their art creates a delicate balance, especially as both artists’ works are largely in black and white with color used sparingly and often to accentuate a particular point.


Both employ a fair share of symbolism to infuse meaning into their art; and both take an experimental approach even as they each have burning concepts on their minds.


Having been together at the Buruburu Institute of Fine Art through 2011 (but graduating in 2013), this is their first joint exhibition since then. It was Willem who invited Longinos to open The Attic accompanied by an artist of his choice. That’s how Thuku came in.


Both address social issues in their art. Longinos explores the intersection of consumerism, immigration, marketing and money in works like his installation featuring both a ‘painting’ entitled ‘Vu Compra’ and a related wire sculpture that the artist calls ‘Manta’. The terms are slang that’s something like Sheng only it’s a pigeon language Longinos encountered among African immigrants living in Europe and hawking fake brand-name items, like Louis Vuitton bags. The authentic luxury bags are also in his side of the show, only this time he’s commenting on the marketing method that objectifies the models as a means of manipulating human desire to ‘buy buy buy’ (as he writes by hand on his art).


And his series on ‘Currency’ is also meant to expose the link between money and immigrants who often risk their lives just to make it to Europe. Longinos has spent time overseas where he has seen these interconnections first hand, including immigrants’ struggles to stay alive.


Interestingly enough, Thuku also explores issues related to risk, identity, work and alienation, only from a slightly different angle. They are themes seen in both of his untitled series, one drawn in nine frames, the other silk-screened in ten. Each series explores the way a woman’s identity is gradually lost as she moves, frame by frame towards picking up a parcel and becoming hired help in the process.


Thuku then transferred the same images (plus one) onto silk-screen, making them into one-of-a-kind prints. The tenth one is of just half the woman, suggesting her identity is almost lost as she’s now an anonymous worker.


Thuku’s notion of risk is revealed for me in his ‘Empty Seats’ series, all of which contain dice and checker boards, and each suggesting how chance (and the roll of the dice) seems in control of where one’s positioned (or seated) in life.


Of course, I’m reading into Thuku’s symbols my own interpretation. But then I gather both he and Longinos employ their art to make critical social commentaries aimed at eliciting further debate.

Posted by Margaretta wa Gacheru at 09:41