Most Kenyan artists work either from home or in studios where they share space with other ‘creatives’. 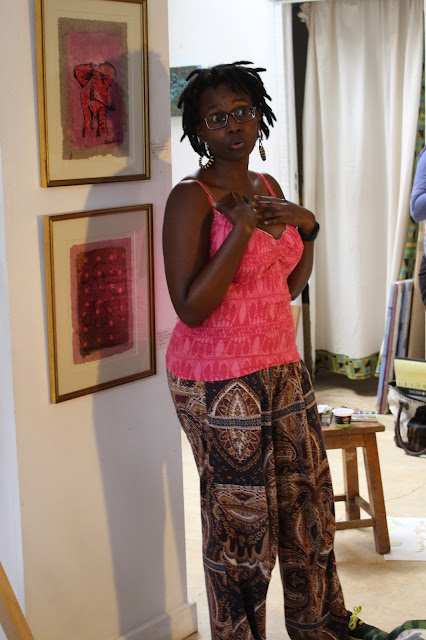 But not Mercy Kagia. She’s more frequently working out in the open air, sitting quietly in public places with her sketch pad, pen or brush in hand. You might see her at railway stations or coffee shops, on a park bench across the street from boda boda or bus stops. (see below) 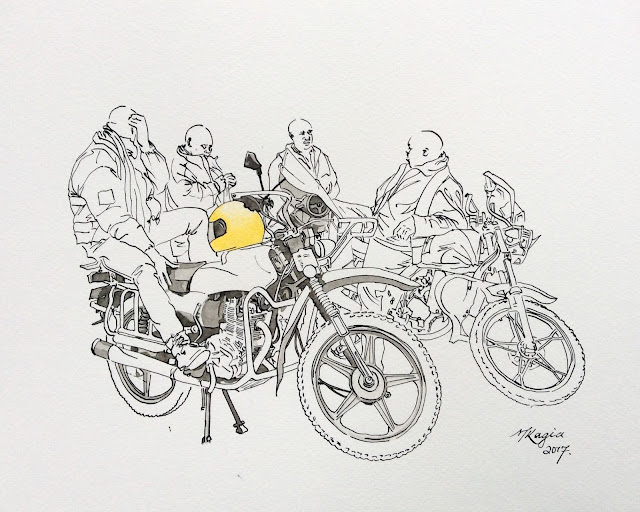 “I’ve always loved to draw, and I was encouraged by one of my wise art lecturer at University to draw everyday if that was what I wanted to do; so that’s what I do and I love it,” says Mercy.
“She also told me that if I could draw well, I could do anything else, be it painting, sculpture, whatever,” she adds. 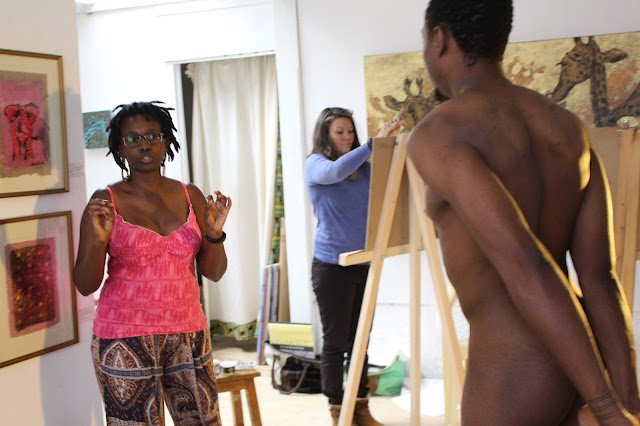 As a consequence, Mercy went on to do a BFA, a Masters and finally a Ph.D in drawing and illustration from Kingston University London.


“I find people endlessly fascinating, so they are my main focus in drawing,” she says, noting that her sketch pad, pens, paints and brushes are almost always with her. She even had a sleek leather bag specially made so she could conveniently carry those essentials with her wherever she goes. 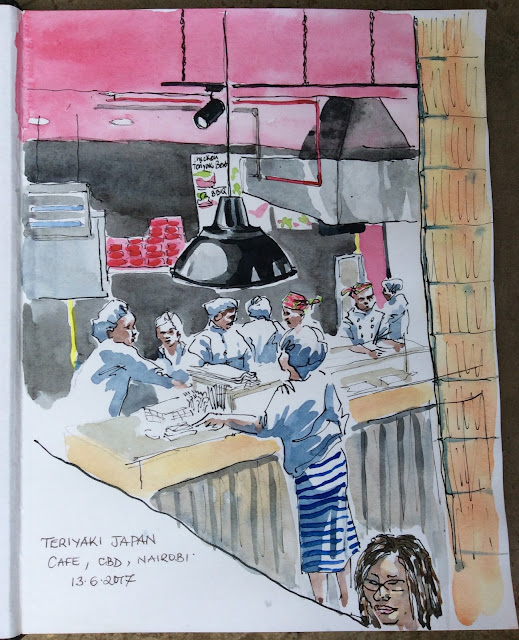 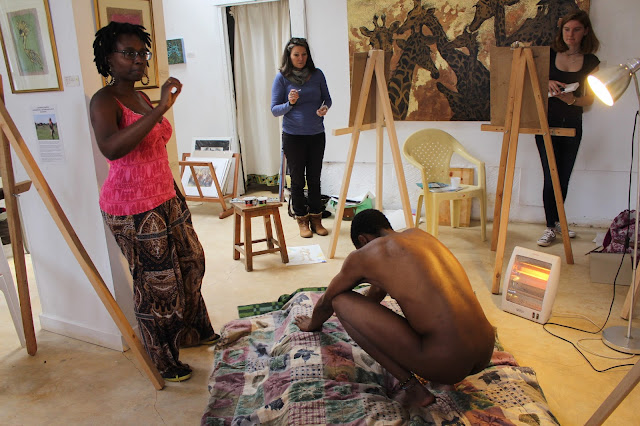 Mercy instructs students in Life Drawing using both male and female models
(photo by Margaretta)
“She’s been doing it here once a fortnight for almost two years. We have both regular attendants who come for every session as well as newcomers and students,” Lara adds. Last Saturday, for instance, there was 16 year old painting, a student from Kenyatta University and several older mothers and grandmothers coming from various backgrounds.


Mercy’s approach to teaching is hands-on, giving each of her students individualized attention. She makes a point of starting off each class by demonstrating what exactly she wants her students to do. She covers everything from how to hold your brush and mix your paints to how to capture contours, lines, shading and shadows of the subject of their attention that day. 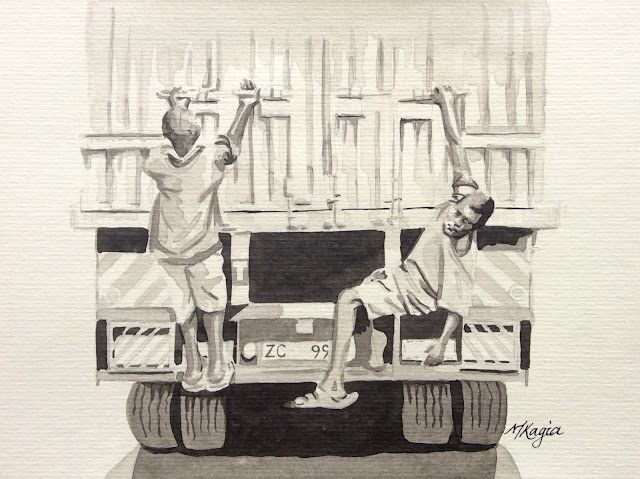 Street boys board the backs of lorries for fun, but it can also be hazardous & risky. Drawing by Mercy

“I’ve been teaching art for many years, mainly at the university level,” says Mercy who’s taught all over the UK, Germany and Bahrain as well as in Kenya. She hopes to start up a proper art school sometime soon. In a sense, the four and eight week sessions that she’s been holding at Polka Dot have been both embryonic and experimental as she’s been testing the waters to see if there’s a demand for professional art instruction such as the kind that she’s been giving.


In fact, Mercy’s style of instruction is so popular with one student, [who also happens to run a tour company] that she proposed her art teacher hold a set of classes at Maasai Mara while based at her Tented Camp.


Mercy agreed, having spent years drawing everywhere from orchestra halls to private weddings, so going to draw animals and landscapes with students at the Mara is a challenge she readily accepted. Details of the tour can be obtained through Polka Dot Gallery. 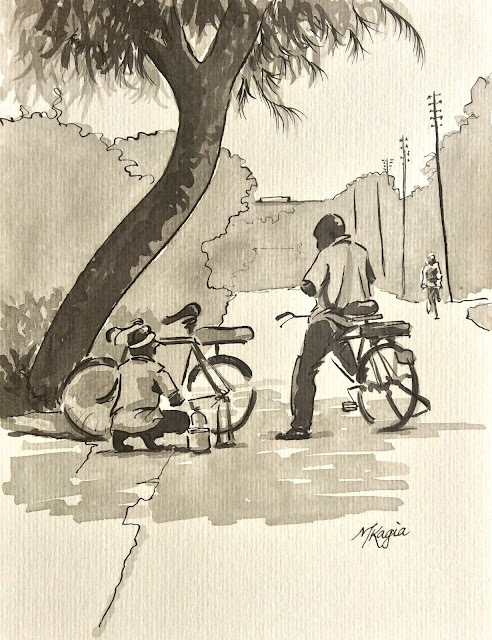 Bicycles are an essential part of the Nairobi landscape. drawing by Mercy


In the meantime, since she’s come back to Kenya [a bit more than two years ago] Mercy hasn’t mounted a one-woman exhibition of her own. She’s contributed to exhibitions like one at One Off Gallery entitled ‘The Nude’. She also donated one of her drawings to a Silent Auction at the Circle Art Garden recently.


For now, she’s mainly posting her art on social media where many of her drawings (and a few videos) are both on Facebook and Instagram. Recently, she also teamed up with photographer and videographer Eric Gitonga who filmed her drawing guys repairing a piki piki at a proper cycle repair shop. Eric artfully speeded up sections of her working to create an impressive film short.


Another unedited video by Sharon Nderitu is of Mercy flipping through her sketch pad, giving one a quick look at her lovely color and black and white illustrations of Kenyans’ everyday life. 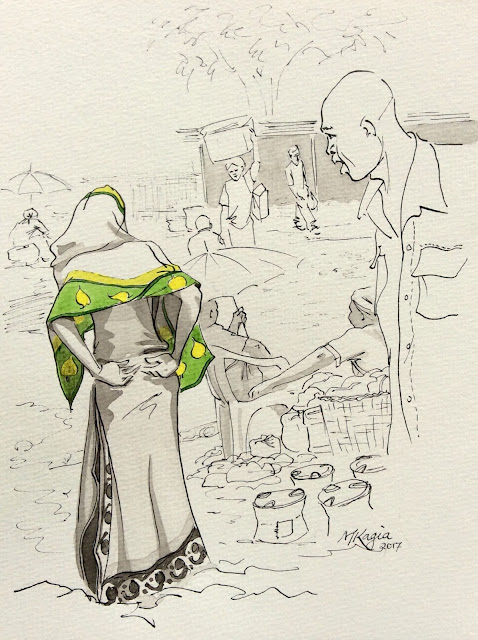 Quick and easy street meals are another common feature of Kenyan everyday life. By Mercy


“The group is open to anyone and they can find out where and when if they check on Facebook. Everything is there,” Mercy adds. 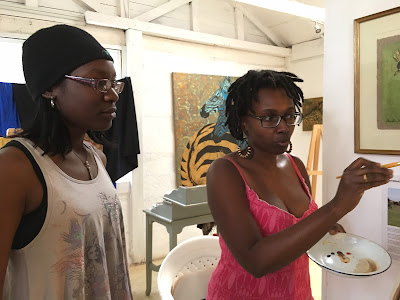 Posted by Margaretta wa Gacheru at 08:50