KAMWATHI’S QUEST TO CREATE HONESTLY FROM THE HEART AND MIND 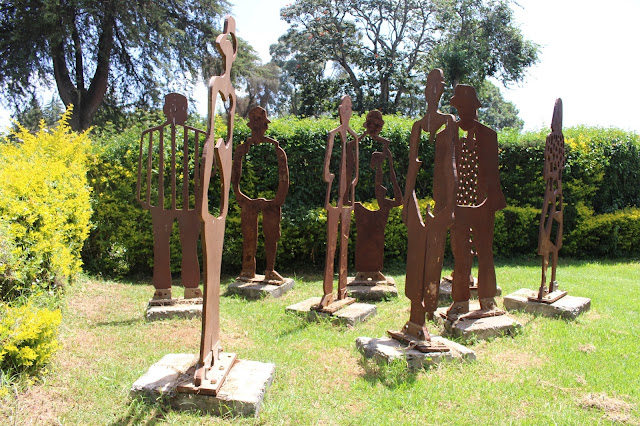 Peterson Kamwathi is one of several globe-trotting contemporary Kenyan artists who has achieved world-class acclaim. For not only is his art part of the British Museum’s permanent collection in London. Not only is he one of the first half dozen Kenyan ‘creatives’ to be showcased at the Venice Biennale. And not only has his art been exhibited in public and private exhibitions all over the world. 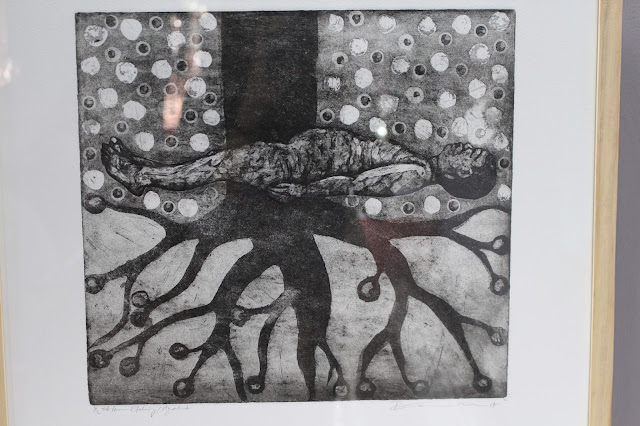 Kamwathi has also been invited to take part in numerous art workshops and residencies where he’s been able to hatch some of his most ingenious artistic ideas at the same time as he’s quietly contemplated issues that challenge his mind and stimulate his desire to translate concepts into original works of art.
But over this holiday season, Kamwathi has been working from home, or rather from his Riara Ridge studio which is just a stone’s throw from his family home.
He also found time recently to attend the opening of Red Hill Gallery’s ‘Eclectic’ exhibition where two of his paintings are on display. 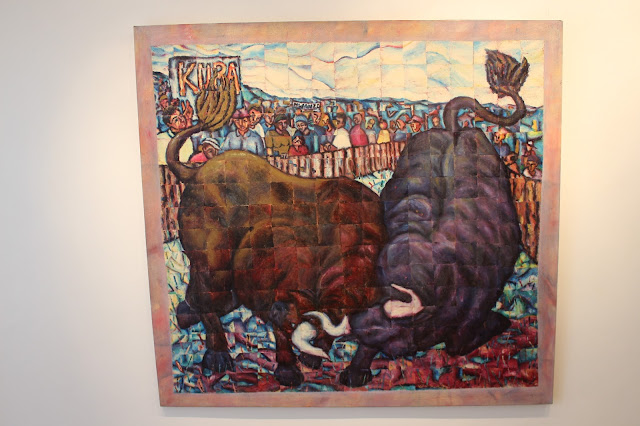 It was there that we found Kamwathi who, despite his world renown and his artistic success, is a humble self-effacing man who’s not only accessible and warm. He’s also generous with his time and willing to take the trouble to answer questions about his art, including the techniques, media and mind-set behind works like ‘Protesters’ and his ‘Untitled’ 2003 multiple mono-print painting of Bulls which are at Red Hill through January 2018. 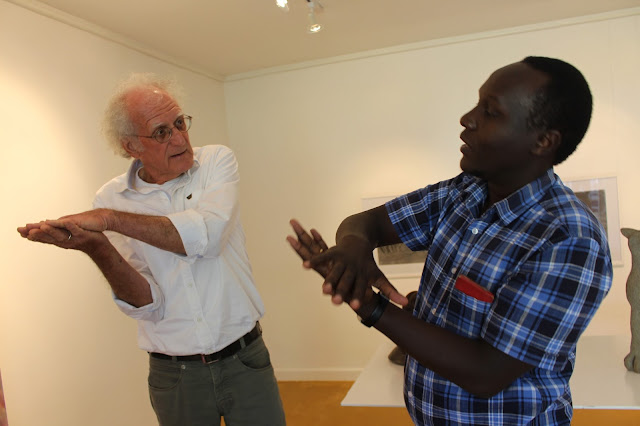 Red Hill Gallery curator/owner Hellmuth Rossler-Musch mirroring Kamwathi who's explaining his technique for creating his Untitled Bulls painting
Both paintings were from earlier periods in Kamwathi’s illustrious career which got a leg-up in 2000 when he first found his way to Kuona Trust back while it was still at the Nairobi National Museum.
He recalls how he literally stumbled onto Kuona after bringing unframed artwork for potential entry in the Kenya Museum Society’s annual affordable art exhibition. Ostensibly, his work was not accepted by the KMS judges because he’d overlooked the entry rule which said only framed work would be accepted.
Crestfallen, he was preparing to head home from the Museum when he walked down into this beehive of arts activity which he quickly discovered was Kuona Trust.
Kamwathi quickly became a Kuona regular and remained with the Trust until 2010 when he signed on with Carol Lees to exhibit exclusively with One Off Gallery. He remained at Kuona until 2011 when he found himself a solo-studio out towards Kiambu.
Since that time, Kamwathi’s shifted his studio as well as his family deeper into the countryside. It was there that we agreed to meet soon after our encounter at Red Hill Gallery. 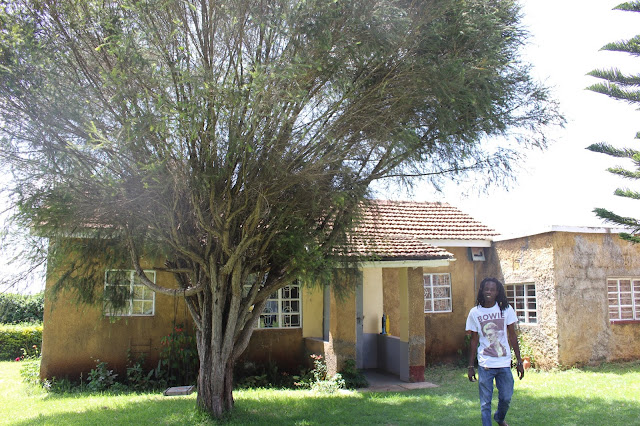 I’d already confessed to Kamwathi that despite having once been to his first solo studio, I’d been shy to invite myself back just because I believed he’d become something of a ‘superstar’ who might have no time for us local reporters. What’s more, many people in Nairobi seemed to utter his name in hushed reverential tones, as if he’d now acquired the status of a demi-god!
Fortunately, meeting Kamwathi in person quickly dispelled such misconceptions. Here was a soft-spoken, down-to-earth sort of man who welcomed me to his studio anytime I was available.
“How about next week? Next Friday?” I asked.
“Fine, if you can get to Banana Hill Gallery, I can pick you from there,” he said clearly extending his open invitation into the realm of practicality. 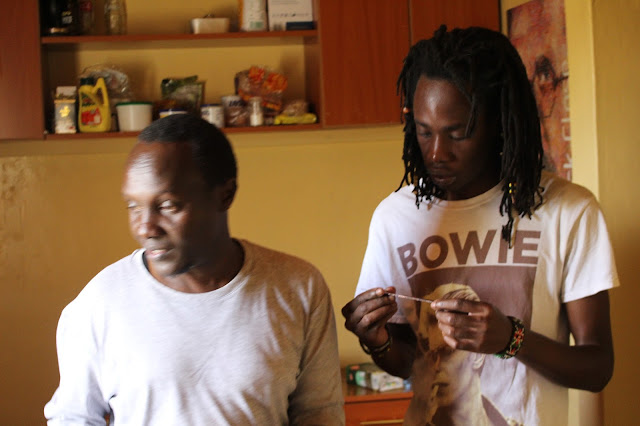 Kamwathi with Nicholas in the print-making studio

So Friday came and he picked me as we’d agreed. His studio was another 20 minute drive through multiple green hills and valleys, passed small scale farms as well as slightly larger plantations where all sorts of crops were being grown. At the same time, one could see trees being chopped down in the name of progress and development.
Fortunately, Kamwathi’s landlord was content renting out his rustic three-bedroom stone cottage and garage to this busy artist who came to work at his studio practically every day.
Only occasionally does Kamwathi have visitors stay in the cottage since every room is normally occupied either with works in progress, works in storage, equipment or other materials he needs to create either his paintings, prints, collages, or sculptures. Even his sitting room is multi-purpose as it’s where he ‘entertains’ (on rare occasions), keeps his few electronics and also creates quite a bit of his art.
It just happened that the day I came to his studio, Kamwathi was in the midst of conducting a print-making (etching) session with one artist, Nicholas Odhiambo (aka Nikomamba), who hadn’t been able to attend the previous print-making session that Kamwathi had conducted at Brush tu Art Studio just days before.
To me, it was impressive that Kamwathi had responded to Nikomambo’s request that the elder artist take a bit more time to show him the technique. Rather than dismiss the Kisumu-based painter for his presumption, Kamwathi kindly agreed to show Nick how the technique was done. 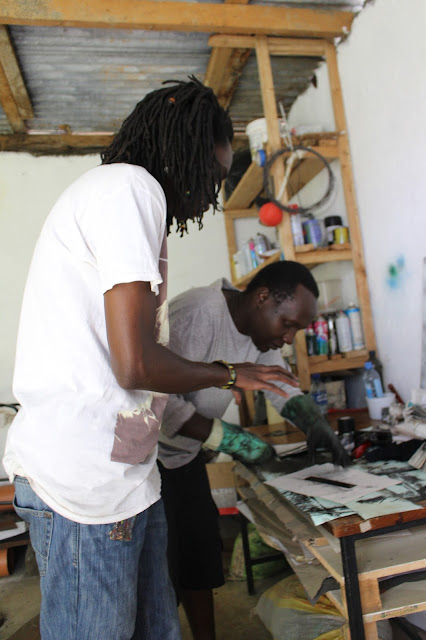 Mentor and Mentee
He invited him to the studio and to what had once been a one-car garage but now serves as his print-making annex where he keeps the mini-printer he got in 2010 while attending at artists workshop in Amsterdam.
“I feel it’s the least we can do for [Kenyan] artists coming up and wanting to learn from us who’ve been around a while,” said the 30-something artist.
Fortunately, the training had started earlier in the week so, as this was Friday, Kamwathi said Niko had already learned the basic technique. Now he only needed to practice it for himself.
That meant he had time for me. I got the grand tour of every room in the studio, including the kitchen where he cut up a slew of fruits (avocados, mangos and tomatoes) for our lunch. (How did he know I am a part-time raw foodist?!)
As we sat munching our sliced mangoes, Kamwathi was able to continue the conversation we’d begun at Red Hill where he’d explained the evolution of both the Bulls and the Protesters.
As he is currently working on several major pieces, Kamwathi asked me not to expose them to the public just yet. That was fair, but what we were able to discuss were several of the past exhibitions where his art had been on display.
What I realized is that Kamwathi is just as keenly concerned about socio-political issues today as he was back in 2003 when he addressed the issues of power, political wrangling and protest in his art. Only now it’s more nuanced and semi-abstract.
“I suspect my work is less poetic today than it was previously,” he mused. “But possibly that’s because I am more conscious of the dehumanization that I see in institutions.” 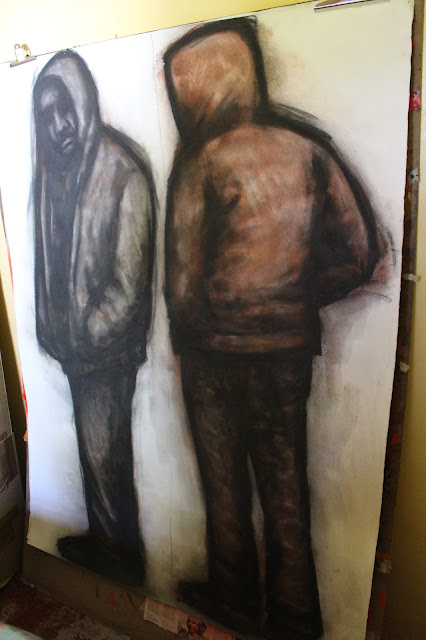 Noting that he’s still exploring a theme that’s preoccupied him for several years, he says he’s intrigued with ‘structures’ and how they affect human beings. It’s a theme that clearly has philosophical as well as practical implications for him.
One place that we could see his fascination with ‘structures’ was in his front yard where twelve of his eight-feet tall soft steel ‘cut-out’ women and men are standing proudly in two groupings, one of nine, the other of three.
These were created, he said, not long after he’d installed similar steel sculptures in Garden City Mall not far from Maggie Otieno’s ‘Gatekeepers’. 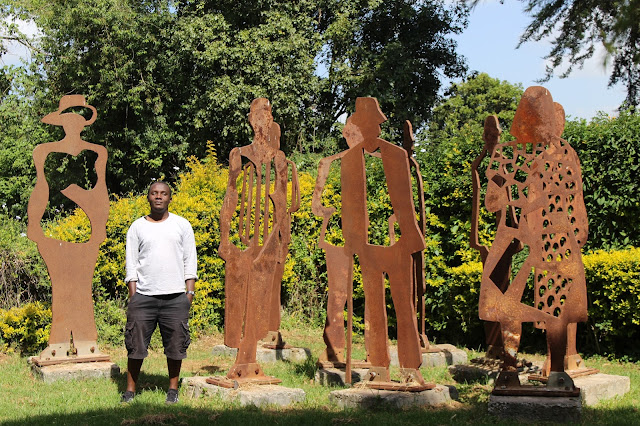 Kamwathi with his soft steel sculptures at his studio
They are regal statues that reveal how Kamwathi can’t be pigeon-holed as simply a painter or a print-maker or a sculptor or even a mentor, coach and teacher. He wears all of these hats and clearly is open to experimenting with even more styles, issues and techniques. 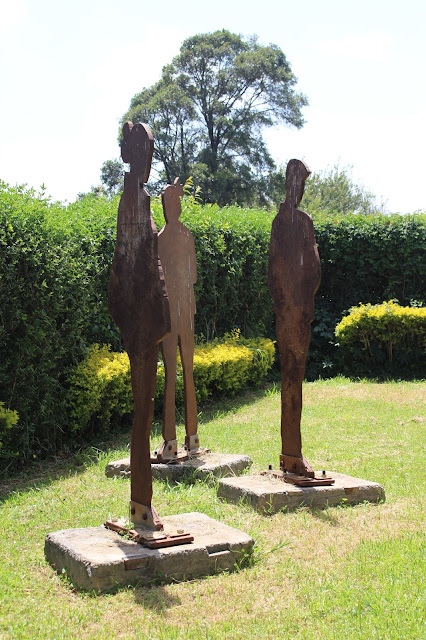 The other three steel sculptures in the studio garden
Recently having gone back to school at Kenyatta University, Kamwathi surprised many friends and fellow artists who assumed he’d be the one to teach and mentor, not the other way around.
But while he continues exploring issues, ideas and themes that mean a great deal to him, Kamwathi admits he’s grateful to have found one space/ place in his world where he can express himself fully, honestly and artistically from the heart. 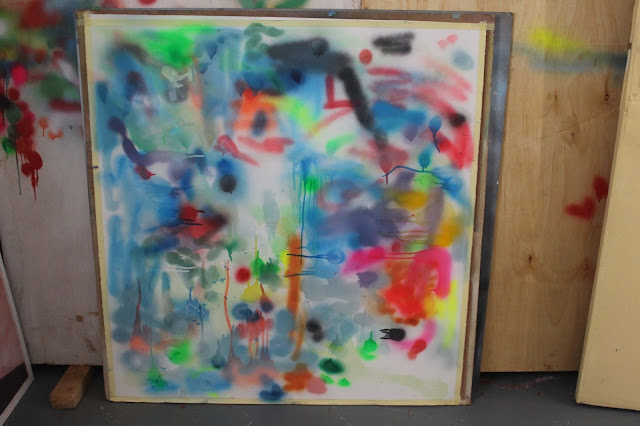 Posted by Margaretta wa Gacheru at 05:10