THEATRE THRIVED IN 2017: A ROUNDUP OF THE YEAR'S BEST AND BRIGHTEST 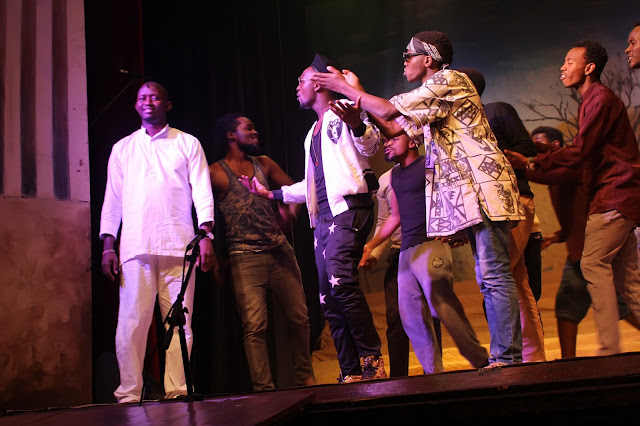 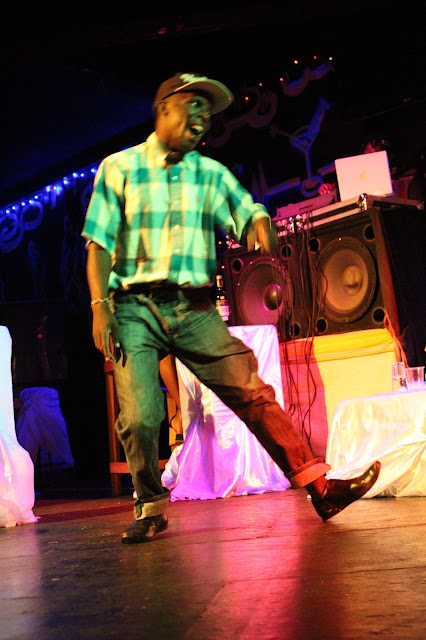 Victor Nyaata was a star often opposite Nick Kwach in Heartstring comedies
By Margaretta wa Gacheru (posted December 27, 2017)
2017 was a year of spectacle, satire, storytelling and several memorable solo performances. It was also a time when hardly a weekend went by without at least one show being staged, and often there were more. 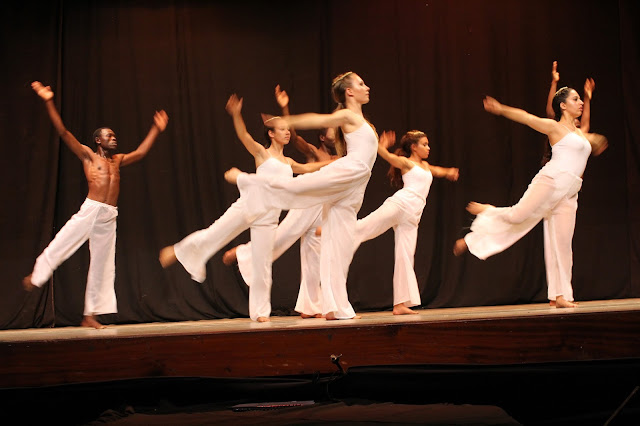 Most consistent, of course, were comedies by Heartstrings Entertainment, a company that has tapped into urban youth’s funny bone with its style of social satire that always seems to hit home. 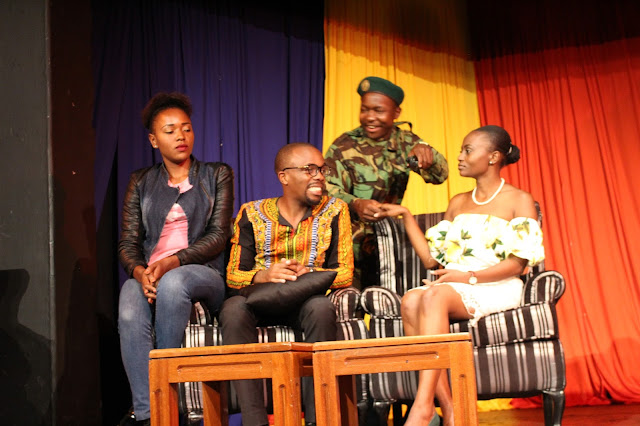 Heartstrings' last show of 2017 was Nobody is Leaving

And as resident playwrights go, none was more prolific this year than Martin Kigondu who not only wrote and directed several new scripts. He and his Prevail Arts also produced shows like ‘What Happens in the Night’, ‘Matchstick Men’ and ‘Love and Peace’ (adapted from poetry by Joan Sikand). 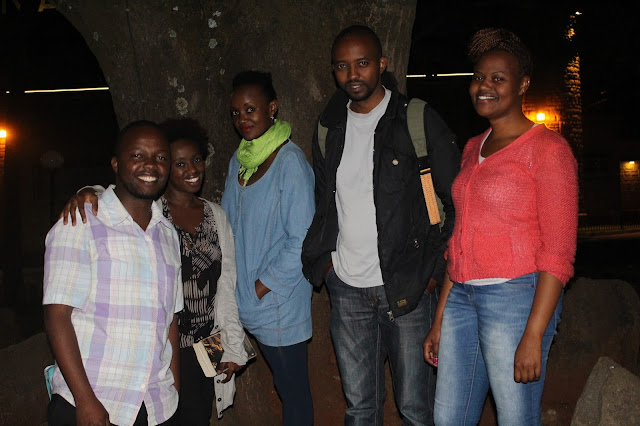 Many of our best playwrights and actors sadly shifted over from the stage to film and TV.  Fortunately, there were several, like Mugambi Nthiga, Martin Githinji, Nice Githinji, Kaz Lucas and Elsaphan Njora who managed both spheres. The draw was apparently working with a professional like Stuart Nash at the Nairobi Performing Arts Studio which is based at Kenya National Theatre. 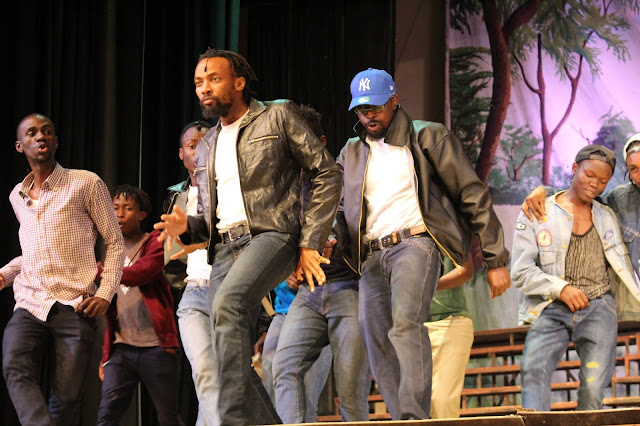 Elsaphan Njora (centre front) in Grease with cast for NPAS cast
It was NPAS that staged spectacular musicals this year and called on those six professionals (among others) to star either in ‘Jesus Christ Superstar’ or ‘Grease’. Both shows set high standards of performance. 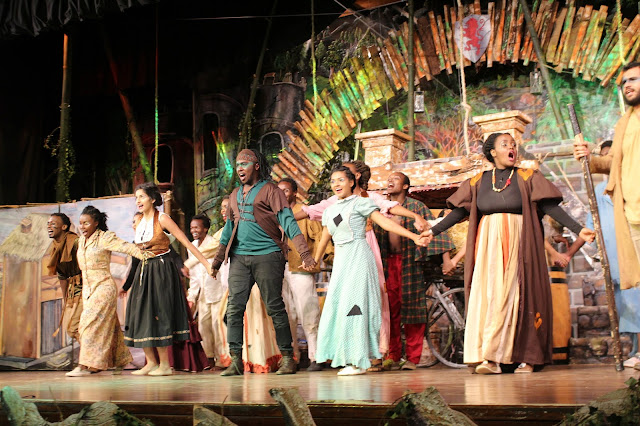 But they weren’t the only marvelous musicals performed in 2017. Aperture Africa and Amar Desai are specialists in creating superlative special effects. That skill was apparent with their staging of ‘Robin Hood’ at Oshwal Theatre. 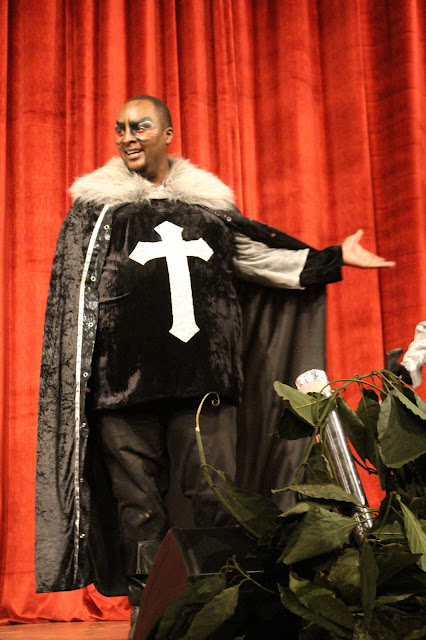 But special effects weren’t all RH had going for it. From choreography to costuming and set design, Amar goes no-holds-barred. The story itself was steeped in an artistically crafted class analysis as Robin robbed the rich and shared the spoils with the poor. He was pursued by arguably the best villain of the year as Bilal Wanjau was brilliant as the nasty Sheriff of Nottingham.


And just as Kenya National Theatre attracted other spectacular shows like ‘The Nutcracker’ and ‘Urban Groove’, so Oshwal Theatre was home to another children’s musical, ‘Alladin’ that also appealed to adults. 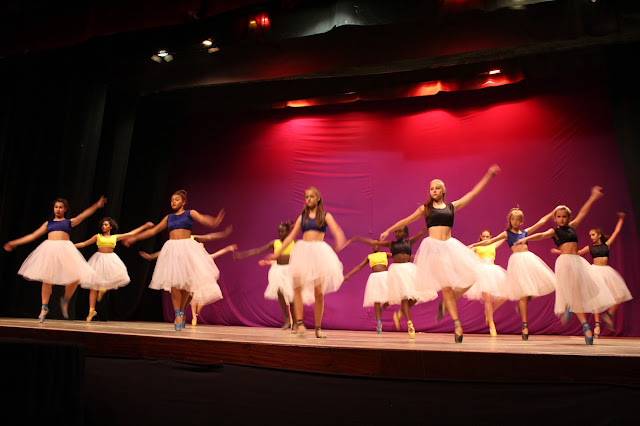 But the other set of thespians who gave performances that transcended barriers of age, gender and class were the storytellers. They came in all shapes, sizes and storylines, featuring everyone from Muthoni Garland’s Nyef Nyef to Mshai Mwangola-Githongo’s Performance Collective (including Mueni Lundi and Aghan Odero) to Maimouna Jallow’s Re-imaginings. 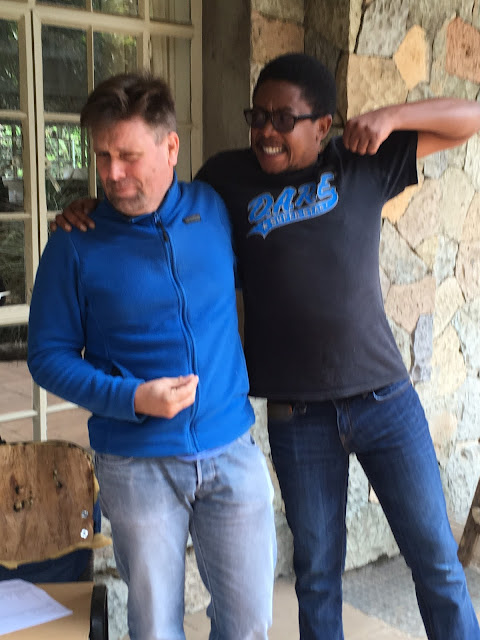 Storymoja Festival was also filled with stunning storytellers. But so was the cast of Silvia Cassini’s ‘A Man Like You’ which came back to Kenya after having traveled to Southern Africa and the States. In the process, three out of the four-person cast staged solo storytelling session.


Both Zimbabwean cast members, Kevin Hanssen and Mike Kudakwashe, gave amazing solo performances in between starring in Cassini’s gripping drama.  Davina Leonard also performed the highly engaging ‘Every Brilliant Thing’ when she wasn’t being the grieving wife in ‘A Man like You.’ The other solo star this year was Mumbi Kaigwa who performed poetry by great African American and Indigenous American poets, including Maya Angelo, Langston Hughes, Paul Laurence Dunbar and Sherman Alexi. Music interludes were by her singer-songwriter daughter Mo Pearson.


Earlier in the year, Mumbi directed a stellar cast of women in The Vagina Monologues, arguably the best interpretation of the Eve Ensler classic to date. 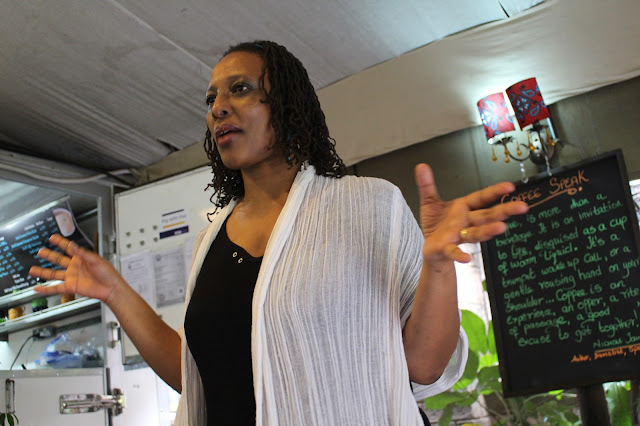 The other major activities that engaged thespians and writers alike were two important festivals. One was Jalada’s Mobile Literary and Arts Festival that performed in Kenya and in several other East African countries. Jalada is best known for being an Online Pan-African literary journal. But once they performed Ngugi wa Thiong’o’s ‘Upright Revolution: Why Humans Walk Upright’ in seven languages during the esteemed writer’s brief trip to Kenya, the journal also established its performance credentials.


The other festival that illustrated how seriously a new generation of Kenyan thespians are taking theatre was the 2nd Kenya International Theatre Festival. KITF brought together performing artists from Eastern and Southern Africa to partner with performers from Kenyatta University.


What the KU productions confirmed was that the university needs to reach out to a wider audience, especially now that performance venues in Nairobi have proliferated. 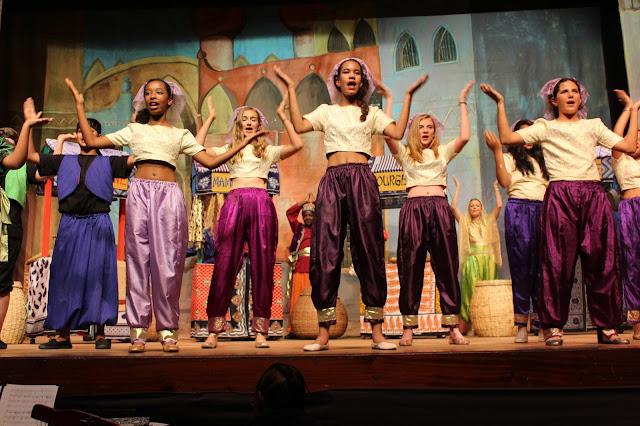 For while it is true that 2017 saw the demise of Phoenix Theatre, we also saw productions at KNT, Alliance Francaise, Goethe Institute, Braeburn Theatre and Louis Leakey Auditorium. But we also saw shows at new venues such as Kwani, The Tribe, The Elephant, Point Zero Coffee, Purdy Arms and Uhuru Gardens as well as at Oshwal Centre.

Posted by Margaretta wa Gacheru at 07:53