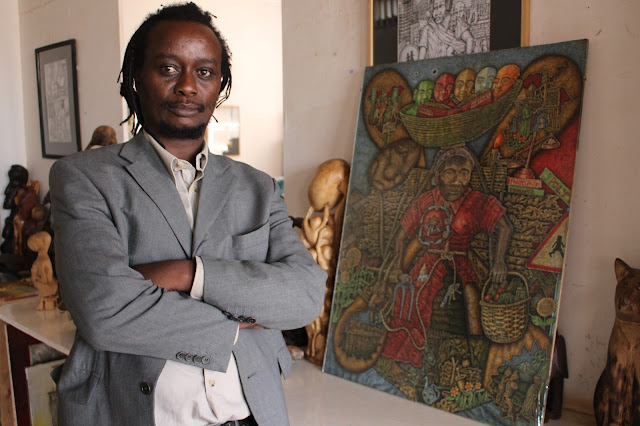 Kaafiri Kariuki has been away from the Nairobi art scene for a while, but the man never gave up his devotion to his ‘dancing pen’ or to painting and drawing what he sees and understands of the world around him.
One of the most grounded, analytical and challenging painters in Kenya today, Kaafiri’s art has never removed itself from interpreting the reality of Kenyan people’s everyday lives. 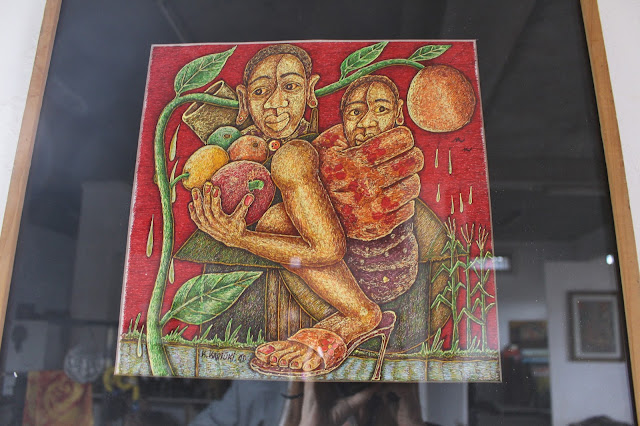 In his current Banana Hill Gallery exhibition, Kaafiri paints everything from ‘Slay Queens’, single mothers and struggling students to farmers, fishermen and freedom fighters. Yet he never paints or draws them out of context. Indeed, each portrait-like painting is intricately interwoven with lines and multiple layers of imagery that lead us to understand the larger picture and deeper meaning hidden in his art.
One persistent theme that his magic pen conveys is Kaafiri’s concern for the problem of poverty and the struggles people go through to escape it. He’s a keen observer of Kenyan life as well as a masterful storyteller. 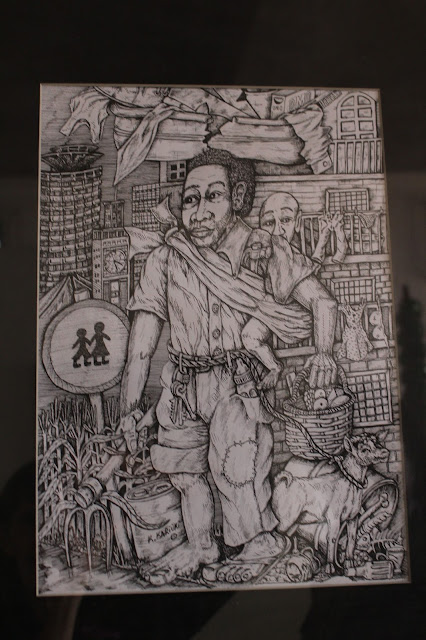 However, Kaafiri is not an easy ‘read’. His art is filled with symbols such that every painting could constitute a chapter in the ‘book of life’ that he one day will hopefully write.
Each chapter would reveal the meaning of the images embedded in his art,  like the two fishes in his “Jesus Magic”. The artist reminded Saturday Nation how Jesus fed the 5000 with just two fishes, according to the Biblical account. “So if Jesus came back today, I’d have him head straight to Kibera to feed the hungry people there!” he said.
One section of Kaafiri’s ‘book of life’ would have to be about women. He’s the child of a single mother and his empathy for women comes through in nearly all his paintings of females. 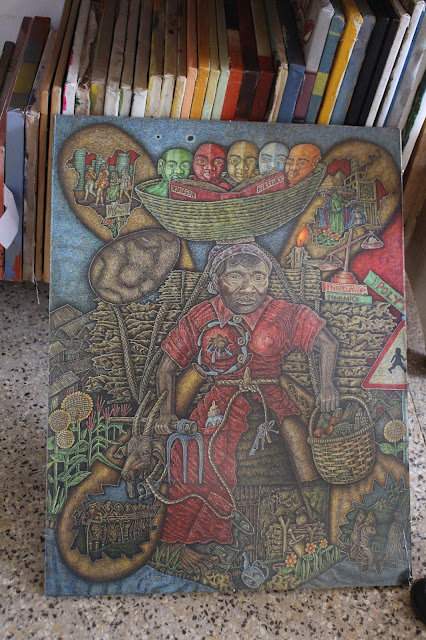 The one exception are his two portraits of ‘slay queens’. I’m told these are Delilah-like women who are beguiling but dangerous. They specialize in seducing men in ways that invariably lead to their total ruin, to the loss of everything that men hold dear. 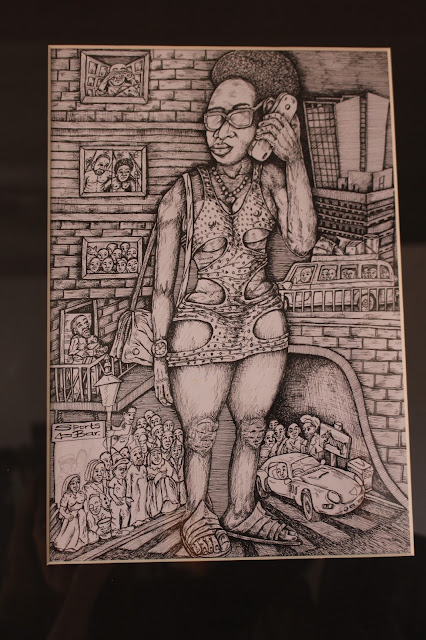 Otherwise, Kaafiri’s portraits of women reflect his compassion for their hardships. The painting of his own single mother is entitled ‘Freedom Fighter I’. It’s a masterpiece in visual storytelling with a lovely life-like portrait of his mum at the centre of the work. Her five children are balanced in a basin on top of her head, and her utensils for keeping them alive at her feet. 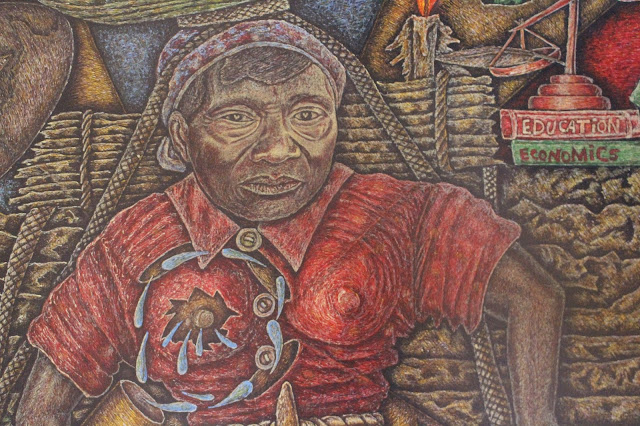 But as I said, Kaafiri is all about context. In this instance, his mum’s story is surrounded by four chapters in the history of Kenyan working women. Each ‘chapter’ occupies one corner of the work. For instance, in the lower left corner, he illustrates the point, as he put it, that “The first paying job rural women had was selling firewood to the British troops.” 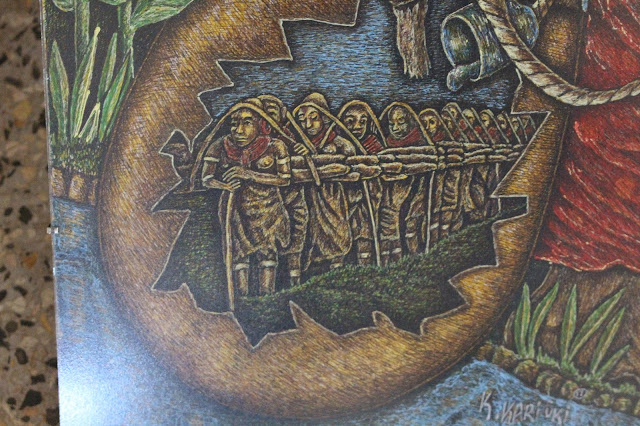 Then, reading counter-clockwise, he portrays women worked on the shamba. And right above that image, we see women having taken a giant step forward. “These women [wearing caps and gowns] are educated; they’re in the process of graduating and getting higher degrees,” he says proudly. 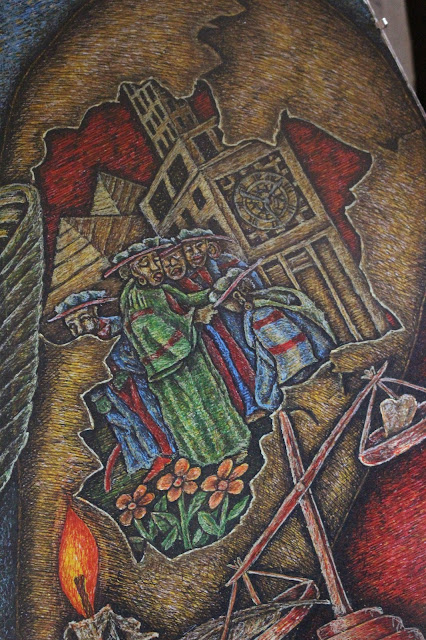 And finally, in the upper left hand corner, he portrays the women’s campaign “My dress, my choice.” 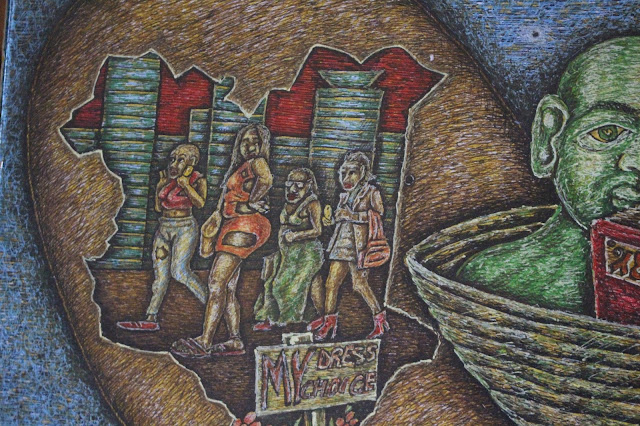 For me, this painting is the most poignant work in the show. It’s also one that reveals Kaafiri’s qualitative capacity to paint and draw hyper-realistic portraits of the kind that has earned him commissions to paint high-level politicians as well as humble farmers.
There’s one other painting in the exhibition entitled ‘Freedom Fighter II’ which is similar to his ‘Fighter I”. Only this time, the subject at the centre is Jomo Kenyatta and the miniature paintings surrounding him tell tales of the country as well as the man. 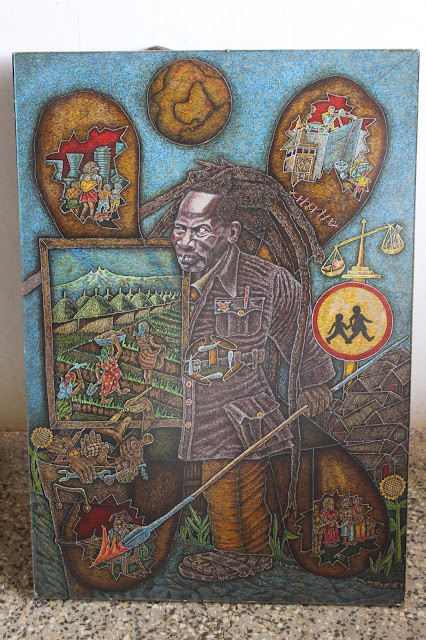 Again, Kaafiri’s taken time to create a hauntingly life-like portrait of Kenyatta. But the rest of the painting would require a whole volume to explain the artist’s symbolism and the various stories that jump out of this stunning painting.

Kaafiri has been drawing most of his life, but he only conceived of his ‘dancing pen’ after discovering that his drawings were sought after, not just by classmates, 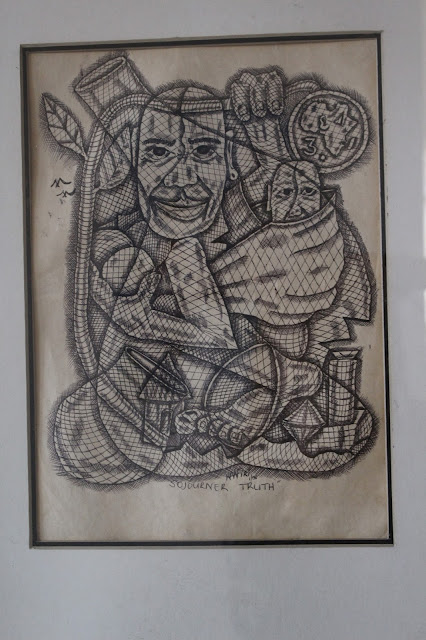 but by tourists he’d meet while he was still living a musician’s life. His meticulous style of drawing and decisive attention to realistic detail make him one of Kenya’s most remarkable visual storytellers, he and his ‘magic pen’. 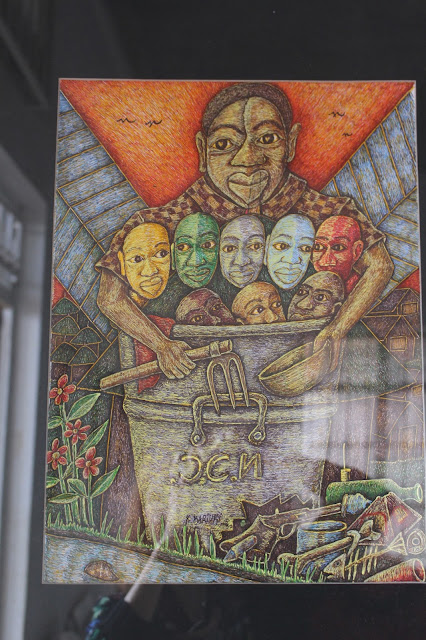 Posted by Margaretta wa Gacheru at 09:17