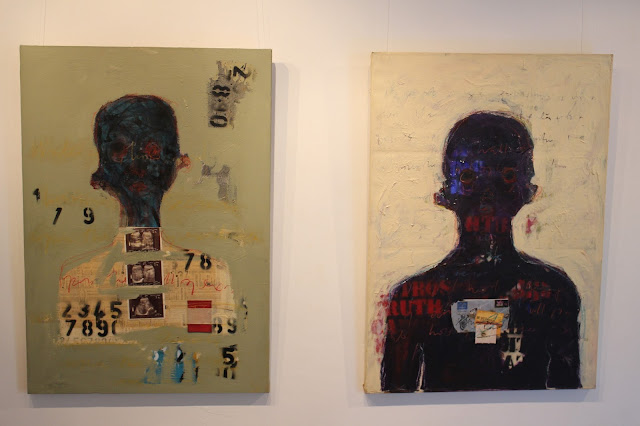 Red Hill Gallery’s Hellmuth Rossler-Musch has been collecting East African art since the 1980s. In relative terms that is ‘early’ since this was when contemporary Kenyan art was just beginning to take off. 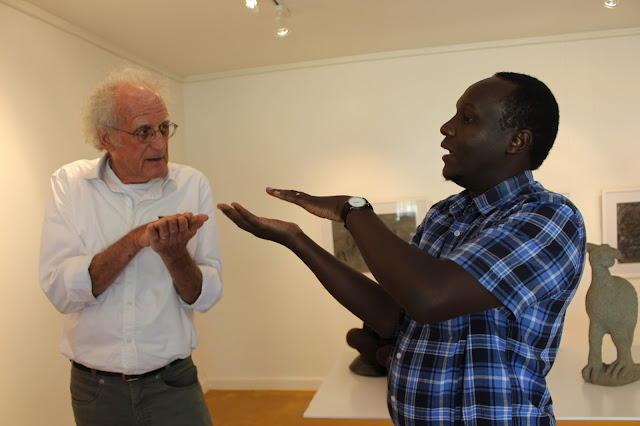 Hellmuth with Peterson Kamwathi at Red Hill explaining technique for creating his Untitled (Bulls) painting
There had been artists working around the region earlier than that. This was especially true in Uganda where Margaret Trowell had started her art school in the 1930s. Around that same time, Kamba carvers were being enlisted to create ‘souvenir’ animal carvings that were commonly denigrated with the name ‘curios’, not art.
But by the 1950s, the late Samwel Wanjau was in his prime and carving guns for the Mau Mau Freedom Fighters who were waging war against British colonialism. It was during those days, deep in the Aberdare forest that Wanjau the elder developed his skills as a sculptor. 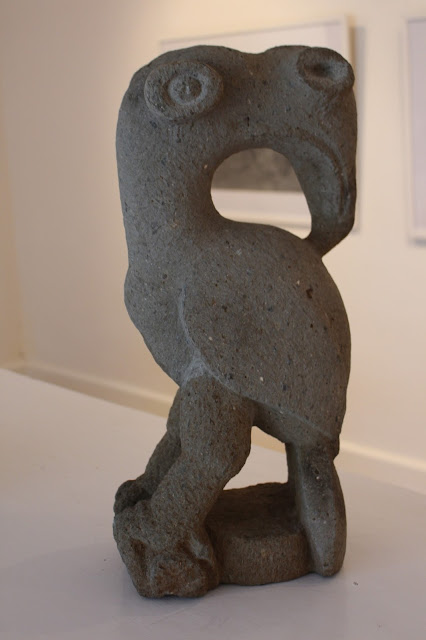 Three of Wanjau’s sculptures belong to one of Hellmuth’s collector friends who asked that Red Hill include them in the currently ‘Eclectic’ Exhibition. Wanjau is best remembered for his larger-than-life wooden sculptures. The three at Red Hill are miniatures by comparison. Still they are lovely examples of Wanjau’s sculptural work in stone.
A good number of the artworks by the eight Kenyan artists in the Eclectic exhibition are ‘NFS’ or not for sale. Others (like Wanjau’s) are for sale but for prices only known ‘On Request’. And a few, like those of Gor Soudan have a price tag on them. So there’s a bit of ambiguity to the Red Hill show. But that should not deter anyone from going to see it, especially as it features art by some of Kenya’s finest, namely Peterson Kamwathi, Beatrice Wanjiku, Sebastian Kiarie, Justus Kyalo, Gor Soudan, Paul Onditi, Onyis Martin and Wanjau. 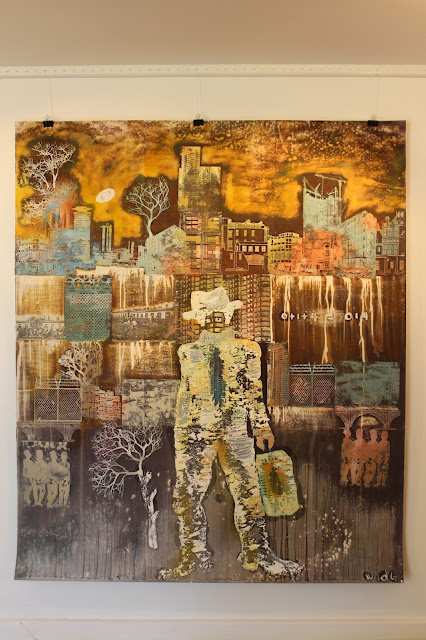 Eclectic is an appropriate name for the exhibition, but not just because some of the art is for sale while some is not. Some of the works feel like a walk down memory lane. That is true of the Justus Kyalo painting which the artist created when he was working in a more semi-abstract style. Two paintings by Beatrice Wanjiku also have that wonderfully reminiscent feel of having been created when she was working on her ‘Immortality’ series from around 2010. Even Paul Onditi’s untitled Smokey (apparently trekking through Kenyan history) collage is from an earlier time. It’s also one of Onditi’s most multi-layered paintings. It’s also one of the finest that I have seen from his Smokey series. 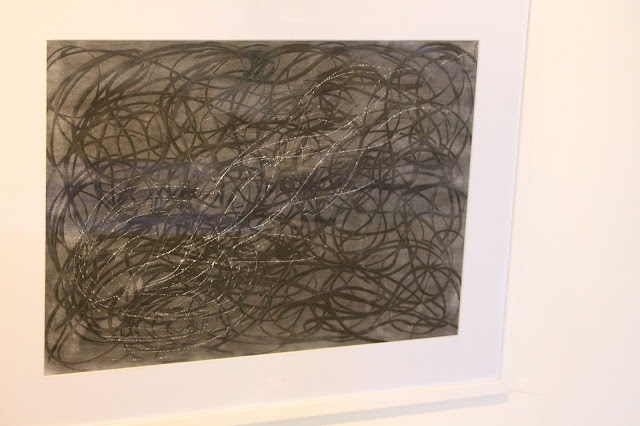 And even Gor Soudan’s etchings on rice paper are from an earlier time. Gor wasn’t at the exhibition opening but Hellmuth recalls that the rice paper etchings (topped with etched charcoal) were done by Gor “either in Japan [where he’d been doing at art residency] or soon after his return.” Either way, they were made around 2014 when he was experimenting with techniques and media that is different from what he’s doing now.
Finally, there are a few works in the Eclectic show that have never been exhibited before. Sebastian Kiarie’s ‘Economic Migrants’ may have been shown once before way back in 2005, either at RaMoMa or Banana Hill Gallery. Onyis Martin’s prints, I believe, have never been exhibited before since they seem to be fresh off the press.
But the one that has certainly never been shown before (because Hellmuth and Erica went all the way to the artist’s studio to get it) is Peterson Kamwathi’s ‘Protesters’. And because the Rossler-Musch have grown quite attached to the work, it’s in the NFS category. 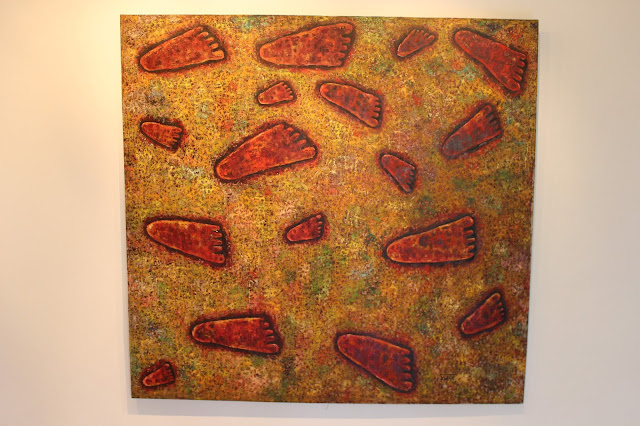 Nonetheless, one should not be deterred from heading up to Red Hill just because this particular charcoal and pastel painting by Kamwathi is not for sale. It’s well worth a good look, as is the other painting by Kamwathi which is hanging at the other end of the gallery.
The Untitled piece (that I prefer to call the Bulls) is for sale. But even if you don’t have big bucks to buy this beautiful ‘early’ work by one of Kenya’s most acclaimed artists, I say this one is even more worthy of the trek up towards Limuru to Hellmuth and his wife Erica’s place.
Kamwathi only created a few paintings using the painstakingly precise technique of mono-print on glass and canvas. When one looks carefully at the work, he or she will be able to see all 272 miniature squares (17 across times 16 top-to-bottom) that the artist carefully aligned together (rather like a painterly quilt) to create this exceptional work. It’s a piece that is more overtly political than much of what Kamwathi does today (which is ever-changing, ever-experimental). 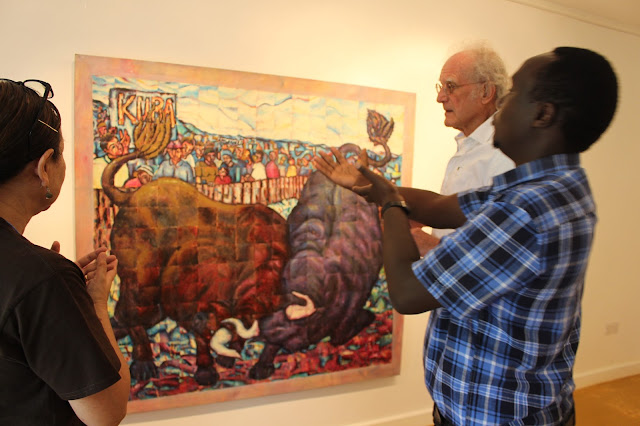 Created between 2002 and 2003, right when Kenya was going through a major political transition (Daniel arap Moi had resigned and Mwai Kibaki recently elected). The political arena was opening up such that bulls (like those in his painting) were wrestling for power. The work is a prize that I personally would love to keep. But since it’s one of those works the price of which can only be garnered ‘on request’, I already know it’s beyond my means.
But if one is keen on Kamwathi’s art, then I recommend you get up to Red Hill before January 23rd when the exhibition will close. Otherwise, the Gallery will be open throughout the holidays, including Christmas, Hanukah and New Year’s. 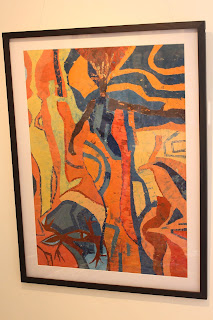 Posted by Margaretta wa Gacheru at 10:18