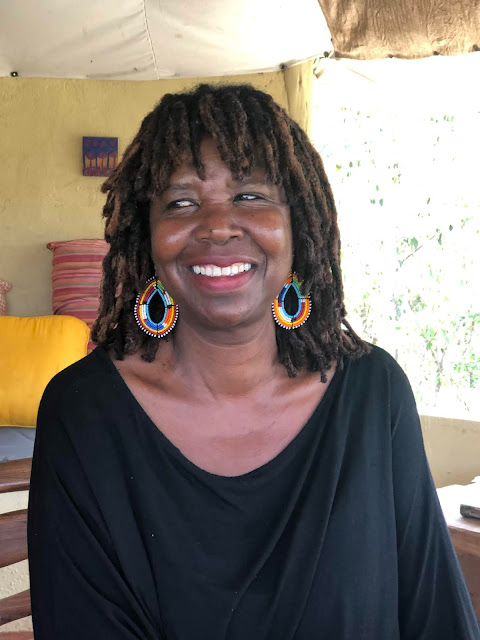 Chelenge van Rampelberg has been living on her land in Kajaido East since 2014. It’s taken one of Kenya’s finest sculptors almost six years to settle in and finally open her own Chelenge Home Studio.
But now that she has, it has the potential to become one Kenya’s leading studio-galleries. The biggest hurdle to her success could be just reaching the village of Oolosirkon where her studio and shamba are located.
It’s well worth the effort, I found last weekend when Kenya’s first female sculptor opened “In Nature’, an exhibition of three veteran artists who have been busy since the 1990s, but haven’t been seen much locally since the dawn of this millennium. They are Irene Wanjiru, Morris Foit and Elijah Ooko. 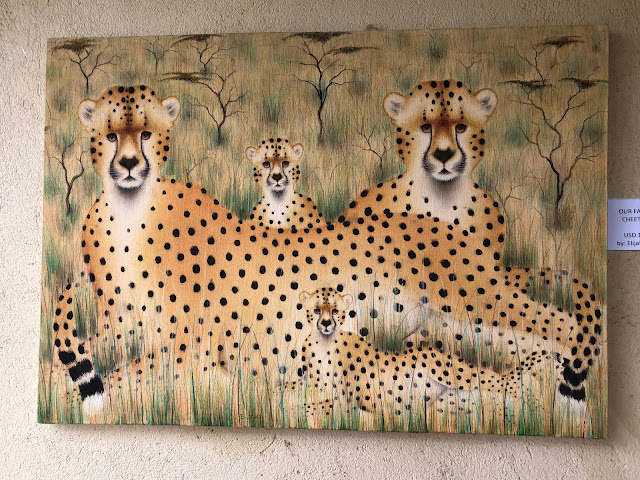 Family of Cheetah by Ooko


The first two are sculptors while Ooko is a painter who exhibited occasionally at RaMoMa between 2000 and 2010 and most recently had a solo show in 2015 at Sankara Hotel. But both Ooko and Morris Foit are two of the many ‘emerging’ Kenyan artists who found their way in the early 90’s to Gallery Watatu where they met the late German gallerist Ruth Schaffner. Neither one had exhibited before, but they had friends who advised them to look for either African Heritage Pan-African Gallery or Gallery Watatu.
In Ooko’s case, he was turned away from African Heritage but was advised to go see Ruth at Watatu. Once he did, she immediately took his work and put it into multiple group exhibitions with artists like Sane Wadu, Wanyu Brush, Joel Oswaggo and the late Jak Katarikawe. 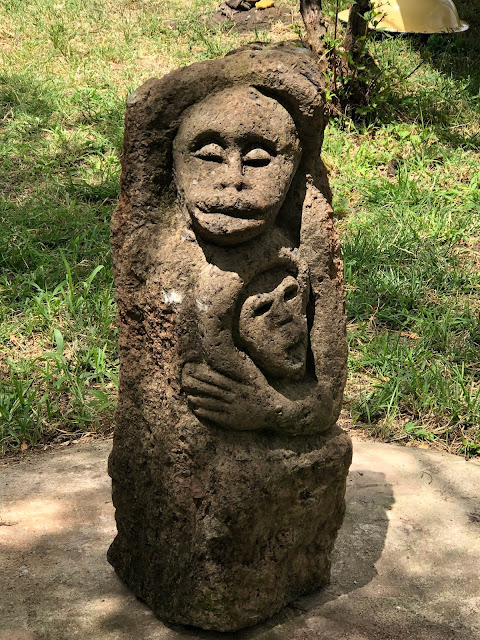 Morris Foit was similarly embraced by Ruth once he asked Wanyu Brush for advise and was told to take his sculpture to Watatu on a Tuesday afternoon where he would stand in a long line with fellow artists waiting for their art to be appraised, accepted or rejected by Ruth. Morris recalls how, when she first saw the piece he brought to the Gallery, Ruth was incredulous but curious to know how he had learned to sculpt.
“I told her I studied four years with Dr. Francisco Foit who was a senior lecturer in Art at University of Nairobi,” says Foit who adopted his teacher’s name in homage to the man. Otherwise, he’s Njau, son of a potter mother who started sculpting with his mother’s clay.
“I met Dr Foit because he used to visit my mother to buy her [terra cotta] pots,” adds Foit who was just 17 at the time. “He offered to take me home and train me in sculpting. My mother liked the idea so I went.” But Foit got tired of the austerity of that life and returned home, eventually to join the army, start a family and finally realize he had a skill that Dr Foit had lastly advised he not to waste. So he took some of the family firewood, fashioned jua kali hand tools and created the first of many pieces that he brought to Ruth.
Ooko’s story is somewhat similar to Foit’s except that he was drawing domestic animals from his youth in Siaya. He studied welding but when business was slow, he would draw and was advised to go see Ruth. But before he did, his sister recommended he go see wildlife at the Animal Orphanage.
“That was my first-time seeing wildlife,” admits Ooko who had already studied animals’ anatomy at home. “So I just changed donkeys into zebras, dogs into lion cubs, cows into buffalos and goats into gazelles.” After that, he went to see Ruth. Both he and Foit remained loyal to her until she died in 1996.
Irene’s background is different. She actually started sculpting in years after Ruth had passed on. It was at a Wasanii artists workshop in Naivasha that she began experimenting with chisels and wood. But since then, she has branched out, sculpting in stone, tree roots and stumps creating everything from functional items to iconic totems, wildlife and women. She even built herself a glass house using recycled bottles for walls and window frames.
But in the last few years, Irene has spent more time overseas than back here. She’s been on various art residencies, mainly on the east coast of the US. Most of the work that she created there has remained on location. But that is why it is good to see her recent pieces at Chelenge’s, in the garden, on the veranda and in the main gallery.


Posted by Margaretta wa Gacheru at 23:59