TWO SAHARAN ARTISTS INTERPRET THE DESERT AND THE SKY 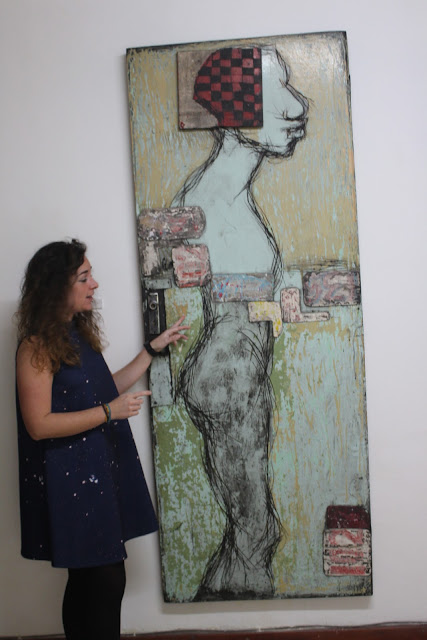 Vivid memories of the sky and the desert make up the essence of Gravitart’s recent Pop-Up exhibition in Peponi Gardens entitled ‘The Sky Inside You: A Reflection from the Desert’.
Curated by Veronica Paradinas-Duro and Hiroko Iahikawa, and featuring the artworks of El Tayeb Dawelbait and Mostafa Sleem, both are artists whose fondest childhood memories are of their fathers and the ways each of them navigated their everyday lives in the Saharan Desert.
Both artists grew up on the edge of the desert, one from Sudan, the other from Egypt; but each having a father who approached the desert from very different perspectives. El Tayeb’s dad used the stars in a way similar to how ocean-going sailors used to do. Both would navigate their way around their ever-changing environs allowing the stars to be their guides. Thus, the theme of his portion of ‘The sky inside you’ relates to the sky and especially to the moon which itself played a central role on his father’s traveling and then finding his way home. 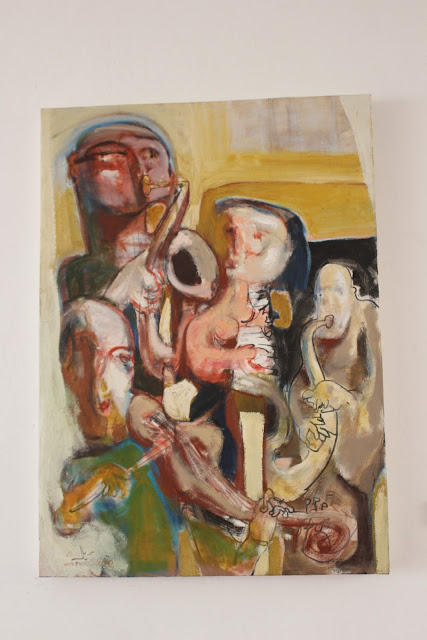 Mostafa’s father, on the other hand, was a Sufi mystic who went into the desert specifically to find peace and serenity, particularly through Sufi music. Thus his artworks, created using oils, acrylics and mixed media, are mainly reflecting on musicians and their musical instruments as means of the Sufi’s meditating to attain enlightenment.
The artists have never met, but Veronica had perceived a poetic connection between the two after having gone to Cairo in late 2017 to select artists for a previous Gravitart exhibition. It is she, assisted by Hiroko Ishikawa who has curated this show which unfortunately was only up for a day. But their combining of the artworks with original music by guest composer David Green and Arabic food made the day a very special occasion. 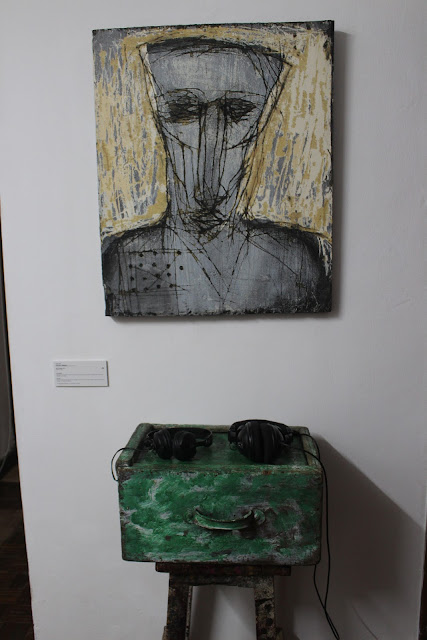 The Sky inside you relates not only to the celestial reality that El Tayeb’s dad used to navigate and traverse the desert. It also explores the mystical connection of the meditative qualities that Mostafa’s father drew upon via Sufi music.
Veronica explained to Business Daily during the Pop-Up that El Tayeb’s style of etching through layers of veneer, paint and grime to find the inner reality of the wood he had etched also exposed a poetic feature of his work. What’s more, El Tayeb’s classic profiles of men were transformed, through her interpretation, into moon times, including everything from a ‘Crescent moon, the ‘14th day’ of the moon, a ‘Full moon’ and even a ‘New Moon’.
The curators also carried the moon concept into poetry and myth. Their invitation includes a charming mythic tale of the Moon and the Dung Beetle whose storyteller is unknown. 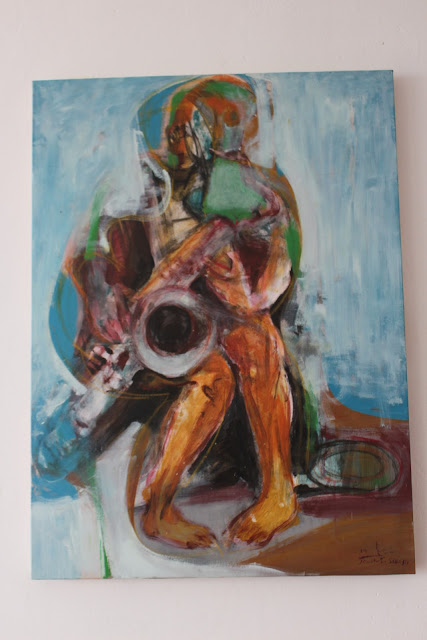 What is known as the installation at the very end of the exhibition which is upstairs in Peponi Garden. That is where one will find the clearest fusion of El Tayeb’s and Mostafa’s mutual memories of the desert and the sky. It takes the form of an installation of The Navigator by El Tayeb and Mostafa’s musicians with two original musical compositions by guest composer David Green from Nakuru.
We had suggested to Veronica that perhaps the twin musical compositions, one entitled The Sky, the other The Desert, ought to greet guests over a speaker system as they entered the exhibition. But apparently, Mr Green had specifically wanted guests to listen to his music via earphones provided, so they could hear and actually feel the sound of both elemental entities, one more percussive, the other more melodious. 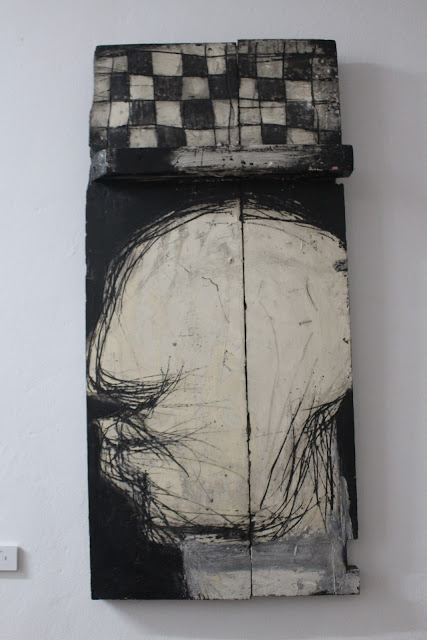 The media that the two artists used to express themselves in this show are distinctive and different. El Tayeb used found objects, mainly wood on which he etches and scratches to created his transitional moments of the moon often using a collage format.
Mostafa on the other hand uses oils, acrylics and mixed media to create his musical ensembles, solo instrumentalists and Picasso-esque people embracing their dreams.
Both artists’ works could be described as semi-abstract, especially as Veronica’s mystical moons display her imaginative style of integrating art and other disciplines. In this case, she blends El Tayeb’s nosy profiles with astronomical shapes of the moon, offering a new way of appreciating the artist’s works on wood. But with Mostafa, there is less need for her flights of fantasy since he provides it with his art, painting in a style that Vero describes at ‘ereiric’, a term I had to look up in the dictionary, meaning ‘of, relating to, or suggestive of dreams’. 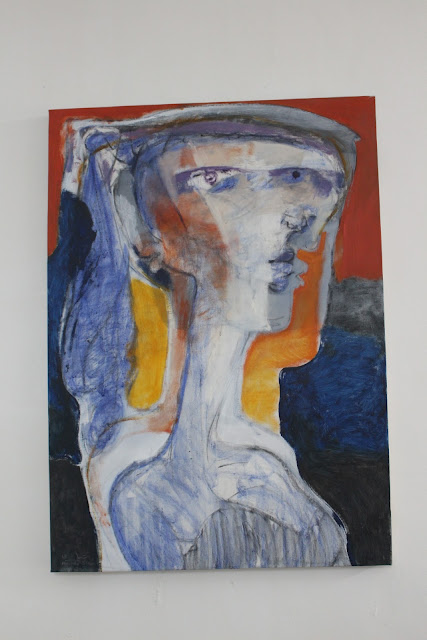 Posted by Margaretta wa Gacheru at 12:01