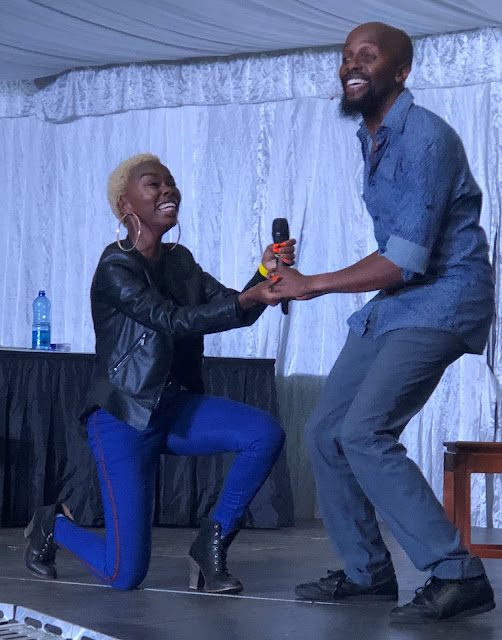 Mugambi Nthige is a busy man, directing the return of Too Early for Birds’ Tom Mboya edition November 9 and starring in last weekend’s production of Duncan MacMillan’s ‘Every Brilliant Thing’ at the Cradle Festival at Lava Latte.
Previously staged by Davino Leonard, both performances were amazing. But Mugambi had the advantage of context since the Festival was all about raising awareness regarding mental illness, especially depression and suicide.
So Mugambi’s audience was primed to appreciate his ‘one-man’ show about a boy who had to cope with those specific issues all his life.
The script itself blends depression and delight as the boy grows up in the shadow of his mum’s attempted suicides. Mugambi pays more attention to delighting his audience with the way he engages them, one by one, allowing his story to unfold through interactions with crucial characters in the boy’s life as he transitions into adulthood.
They include the Vet who euthanizes his beloved dog (foreshadowing the death that’s bound to come), the Dad who copes  with his wife’s depression with music, the Teacher whose puppet Bosco enables the boy to pour out his feelings and the Girlfriend-Wife Sam who loves the delightful man but cannot cope with his bouts of depression. 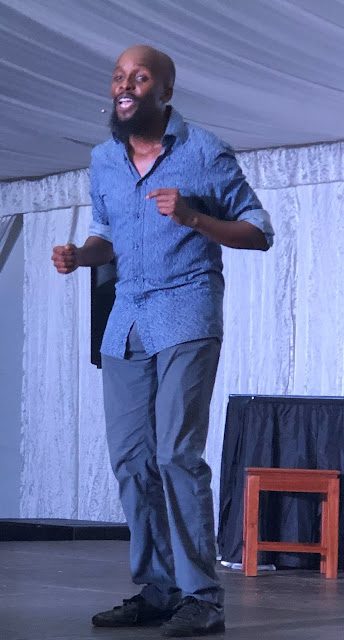 By accident or design, Mugambi engages two of his fellow thespians to be his Dad (Elsaphan Njora) and Sam (Auudi Rowa), both of whom add to the charm of this play which grapples with problems that today has become epidemic not only in Kenya but worldwide.
The list that the little boy starts when he initially intuits that his mom has a problem is of course what ‘every brilliant thing’ is about. The child tries to help snap his mother out of her depression by listing things he believes will make her laugh, play along and ultimately dispense with her sadness.
At first, he aims for 1000 listed things, but after meeting Sam, he aims for a million. But then, when depression overtakes him and Sam disappears, he cynically throws away his ‘brilliant’ program altogether.
To the joy of Festival organizers who ultimately would like to raise awareness and ideally eliminate the problem of suicide with hope, ‘Every Brilliant Thing’ offers that message in the end. However, Mugambi never quite convinced us his character ever really got depressed. But his joy, especially at meeting and falling for Sam was genuine. Kodos for that!


Posted by Margaretta wa Gacheru at 06:17