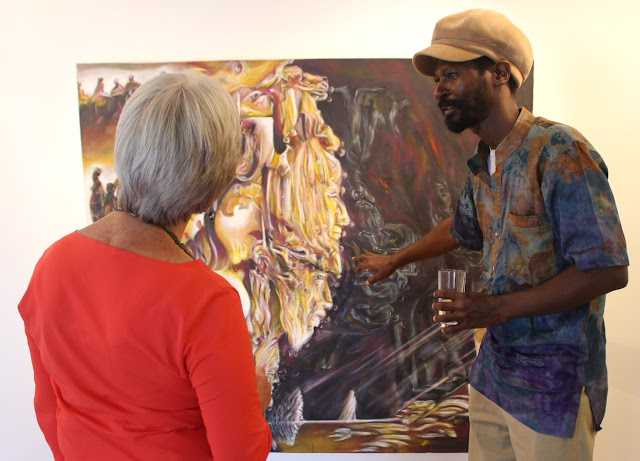 From the moment we first saw Samuel Githui’s Lamu triptych with those donkeys casually meandering through that carless city’s narrow streets, we knew we were seeing work by an exceptional Kenyan artist.
His three-piece oil painting was on display at RaMoMa Gallery several years ago. But even then, we could see that Githui wasn’t one to follow trends or popular tastes like painting portraits of pretty girls in splashy contrasting hues. Instead, his art testified to his being a true 21st century Kenyan artist who was creating according to the rhythm of his own soul. 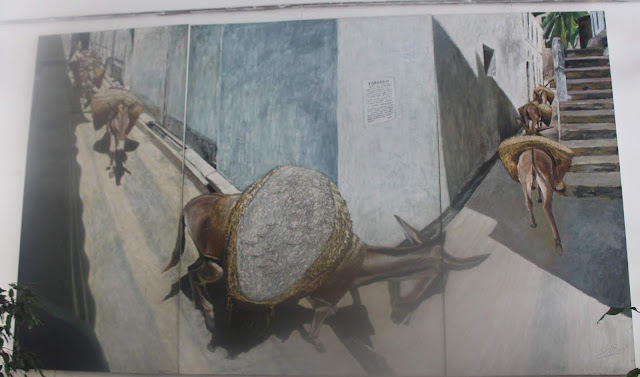 For instance, he was the first Kenyan to paint guys on bicycles loaded down with bread crates (or without) which, by now, has become another common theme seen emulated by a number of Kenyan artists. But even when others tried to recreate his style, none could quite get his way of painting strokes which were neither hyper-realistic nor impressionistic, yet they were vivid and fresh all the same.
Then Githui went a step further, attempting to translate three-dimensional cinematic motion into a painterly two-D genre. His stunning black and white series of a Kenyan doing a contemporary dance was ingeniously designed as if it were frame-by-frame of a motion picture. It was first shown at a Pop-Up exhibition curated by Circle Art Gallery and later displayed at what was then Kuona Trust (now Kuona Artists Collective). 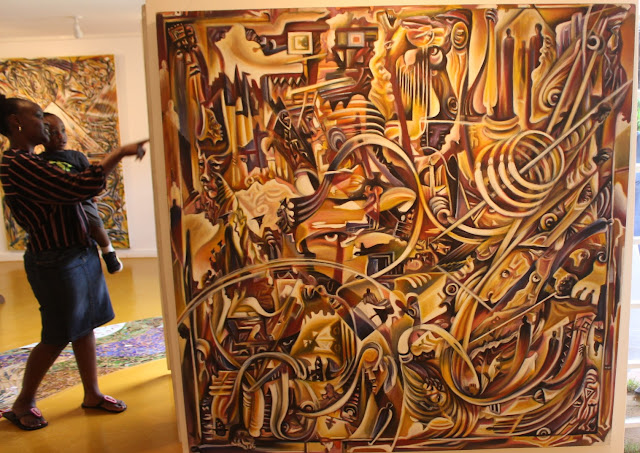 “It was as if he was trying to capture movement in a static form,” comments Erica Rossler-Musch, co-owner of the Gallery with her spouse Hellmuth. She says there seemed to be a hint of the same idea in Githu’s current solo exhibition at Red Hill entitled simply ‘One’.
In ‘One’, Githui has done something else again. He’s ventured off into a whole other artistic stratosphere which is not just unexpected and original. It’s also baffling and reflective of the artist’s relentless quest to discover new dimensions in his art.

In this regard, Githui claims his intense style of combining swirling shapes and lines with ochre-toned hues has been dictated to him by the paint itself. Or more precisely, it was the primer coating that he put down on his large canvases that compelled him to draw and then paint in surrealistic shapes, patterns and forms. 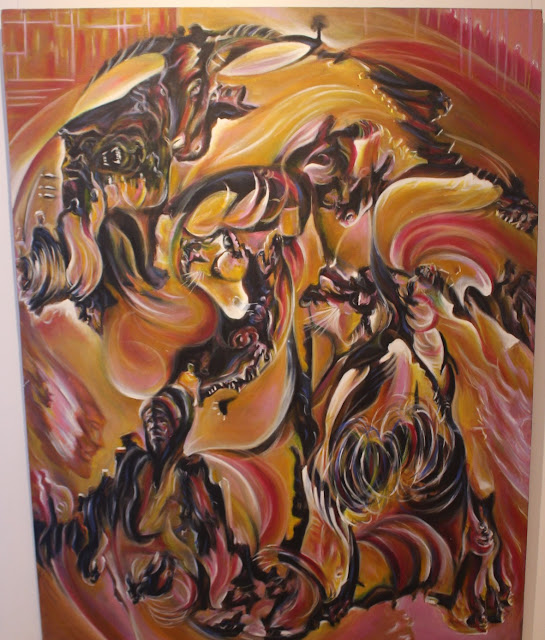 Explaining the chronological unfolding of his nine paintings on display at Red Hill, he brings us to his initial efforts in this new direction. In the first work, he still paints including figurative forms, such as profiles of old bearded men and animals.
But as he continued to work on other canvases and respond to the way the other primers dried on his canvases, his art grew increasingly more intense, abstract and other-worldly.
The artist describes his process quite clearly: “I felt the need to let the medium dictate the cause of action rather than taking the lead on a directive and executive role of creating the work. By doing so, I want to elaborate the relationship and interaction of different media (in these works, predominantly acrylic) and discover optional ways and possibilities to communicate and express myself in my artworks.”
In the end, nearly all hints of figurative works are gone. His most recent pieces simply reveal beautiful abstract swirls of color, suggesting anything from volcanic eruptions to eyes of hurricanes. 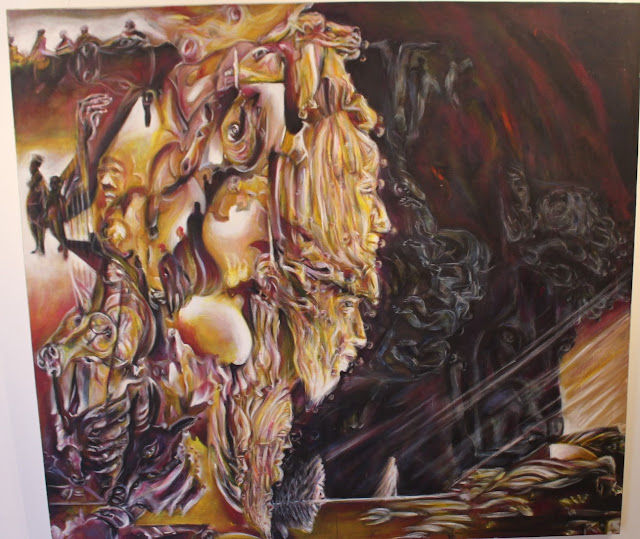 Whatever his paintings might mean, Githui may speak about the process, but the art itself sustains the mystery and magic of his fearless genius. The show is a must-see for anyone wanting to know works by one of the way-showers of Kenyan contemporary art.
Ironically, the last piece that he prepared for his Red Hill show has a giant pyramidic triangle at the centre of the work. It’s practically transparent, yet one imagines we can see ancient muses revealing themselves from deep inside his artwork. Or could they be speaking through his sub-conscious?. Or perhaps Githui tapped into his own mysterious Sphinx who’s been guiding the process all along? Who knows!! 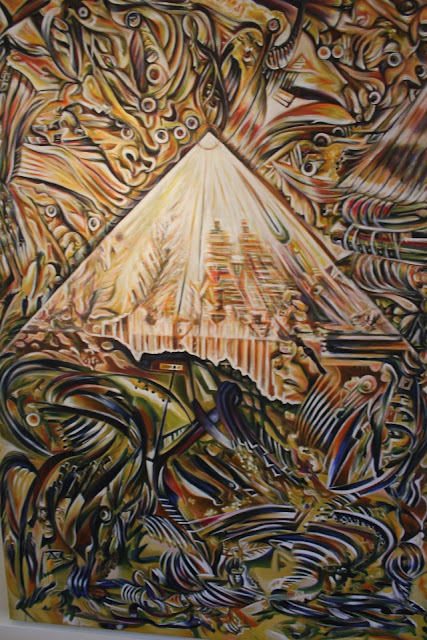 Meanwhile, this Sunday, 1st December at 5pm, ‘In Vitro’ an exhibition by Brazilian artist Leonice Coimbra is opening at Nairobi National Museum. Leo has created an exhibition that challenges rampant consumerism with her collections of recycled glass containers all of which are filled with things meant to amuse and generate wonder. Her show runs through December. 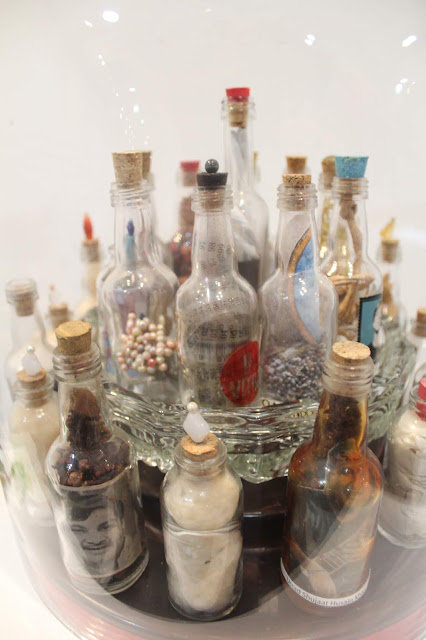 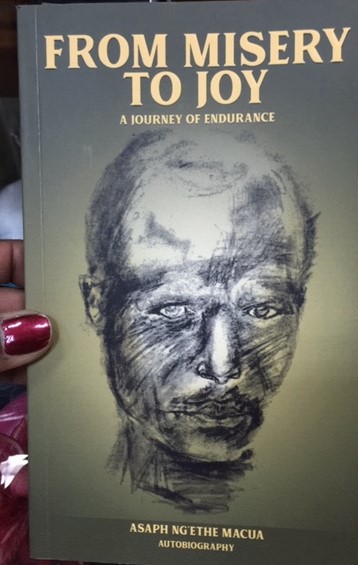 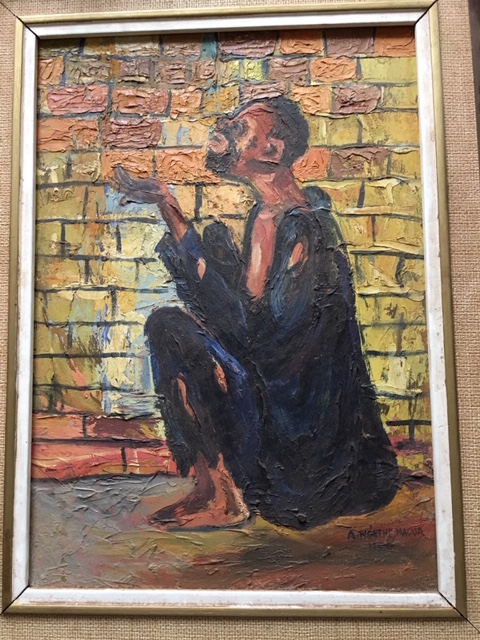 Posted by Margaretta wa Gacheru at 09:42