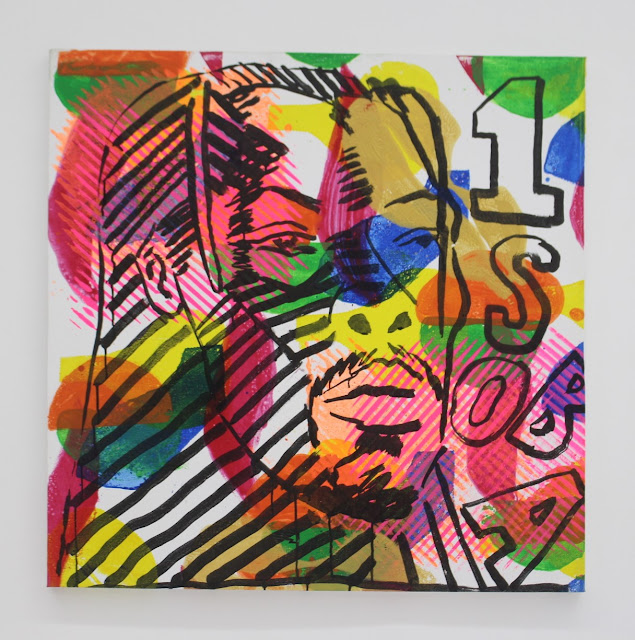 Ever since the African Heritage Pan African Art Gallery on Kenyatta Avenue closed, Kenyans’ exposure to Pan-African art has been wanting. That is, up until Circle Art Gallery’s Danda Jaroljmek started inviting leading curators from around the region to select artworks that best represented their countries and exhibit them at Circle Art.
Starting in 2015 with ‘Addis Contemporary’, there has been a regional exhibition almost every year since. In 2016 it was ‘Kampala Contemporary’ followed by ‘Khartoum Contemporary’ in 2017 and ‘Harare Contemporary’ in 2018.
And now, the first exhibition of the new year at Circle Art is a group show entitled ‘Atlantico: [featuring artists from] ‘Angola, Sao Tome and Principe Contemporary’. Curated by British producer and gallerist Dominick Tanner, who was present for the show’s opening night, the Angola Embassy was also represented by its 2nd Secretary for Political Affairs, Monadia Sanazengi Sanches Antonio. 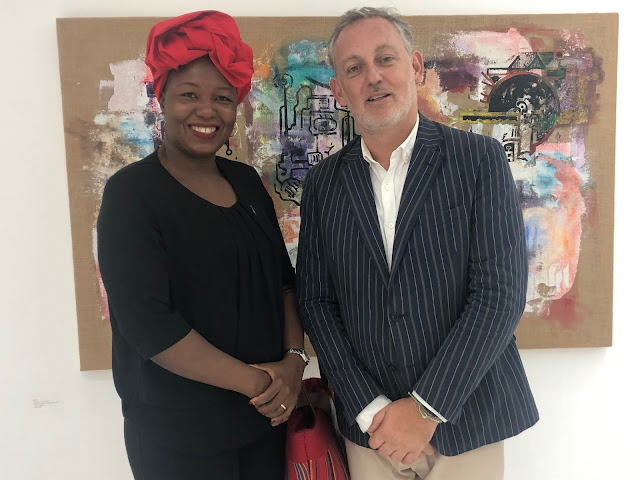 The show itself features eleven Angolan artists and one from Sao Tome, Kwame Sousa whose two paintings were conceived while he was an artist in residence at Tanner’s ELA gallery, ELA standing for Espaco Luanda Arte.
The show is a marvelous mix of inter-generational works ranging from the graffiti artist, ZBI whose colorful butterfly beauties remind us of Kenya’s own graffiti artists to Kapela Paulo who is quite a bit older and who Tanner considers one of the Angolan ‘masters’ along with Antonio Ole and another known as Van.
Equally there are youthful painters like Ricardo Kapuka who paints burnt out buses vaguely reminiscent of another Kenyan artist, Dennis Muraguri and the upcycled masks by Joana Taya also resemble Evans Ngure’s junk art masks. Both of these Angolans are relatively young by comparisons to Kapela. 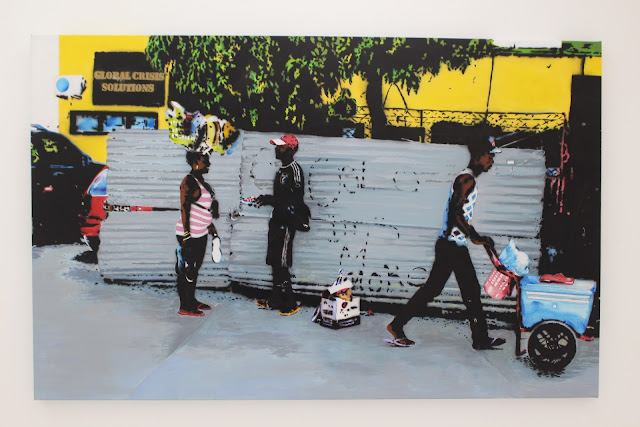 Tanner, like Danda, has been keen to give wider exposure to the artists he appreciates most. The two gallerists originally met at Art Fairs, first in Cape Town and Johannesburg, and later in London where they have both introduced regional artists to wider audiences.
Danda’s work has been to not only raise global awareness of East African artists’ appeal by showing their works in places like Paris, London and Dubai. She has also sought to foster appreciation of local artists for their Pan-African peers.
By getting to know regional curators, Danda has trusted their taste to bring what they consider the best works of their local artists.
Certainly, the eclectic mix that Tanner has brought offers an excellent perspective on the unsung talents that one can see ‘emerging’ after many years of civil war that their country has endured. 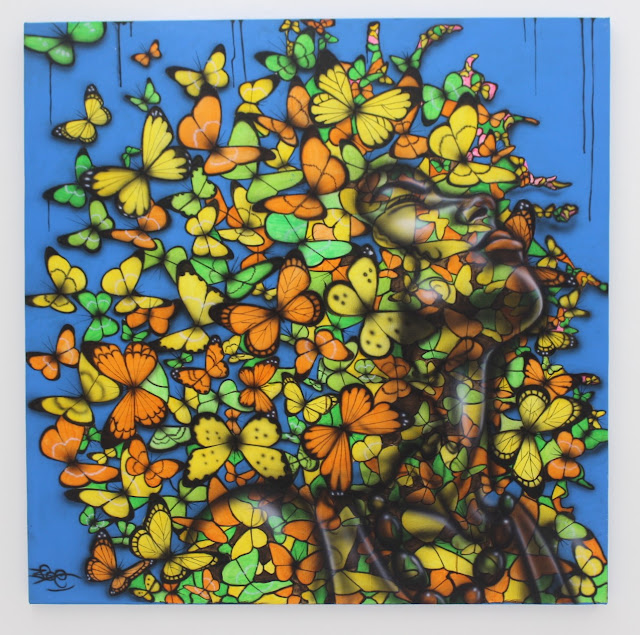 Prior to his moving to Angola eight years ago, Tanner was an investment banker and art collector who had been born in another part of Portuguese-speaking Africa, Mozambique.
“We didn’t live in Mozambique long after I was born. My family moved back to the UK, but I guess Africa has always been in my blood,” he says.
Opening ELA soon after he arrived in Luanda, he and his gallery have been able to offer a platform for local artists like the eleven whose works are now on display at Circle Art. “When I met Danda, I realized she had a very similar perspective on African art as I, so I was happy to accept her invitation to have a show in Nairobi.”
In addition to his gallery, Tanner recently established AIR ANGOLA, which is the first artist-in-residence program for non-Angolans in that country.
“The reason we decided to include Kwame Sousa [who is from Sao Tome] in this show is because the two works we brought of his to Nairobi were painted at AIR ANGOLA,” says Tanner who adds he will be delighted to consider a Kenyan artist for the program in the future. 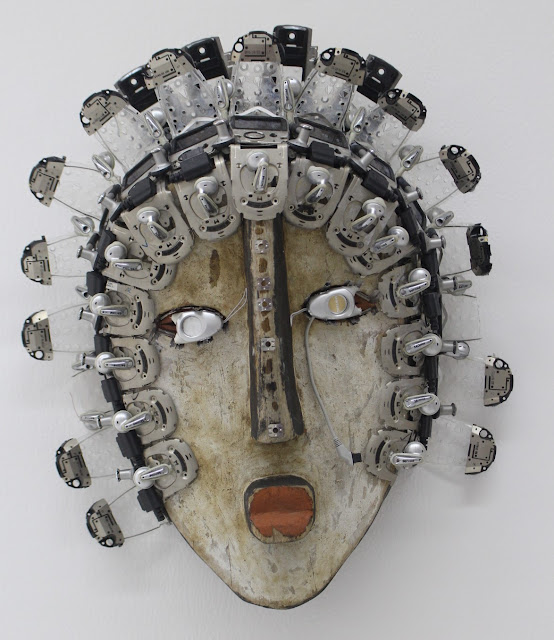 From this writer’s perspective, I cannot easily identify which Angolan artist I prefer. But I appreciate both women artists in the show. There’s Daniela Riviera who decorated one of her two masks in painted sim cards and Joana Taya whose cut-out-paper portraits of ladies has a simplicity and beauty that contrasts sharply with the radically abstract paintings of Babu and the flamboyantly colored portraits of Francesco Vidal who might be compared to the Kenya-based Ethiopian artist Fitsum Behre Woldelibanos
One need not look for comparisons between the Angolans and Kenyans. But one can’t help seeing something very special about regional artists and their similar use of elements, such as bold sun-kissed colors and recycled mixed media. The show runs through 21 February. 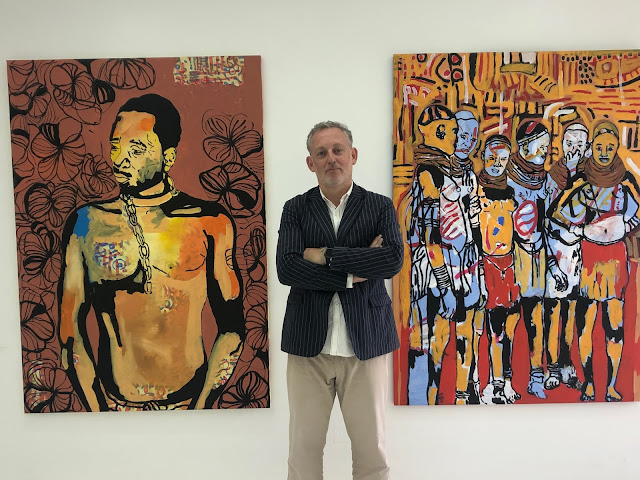 
Posted by Margaretta wa Gacheru at 00:47