FATHER-SON TEAM TO SAVE KENYAN WILDLIFE THROUGH ART 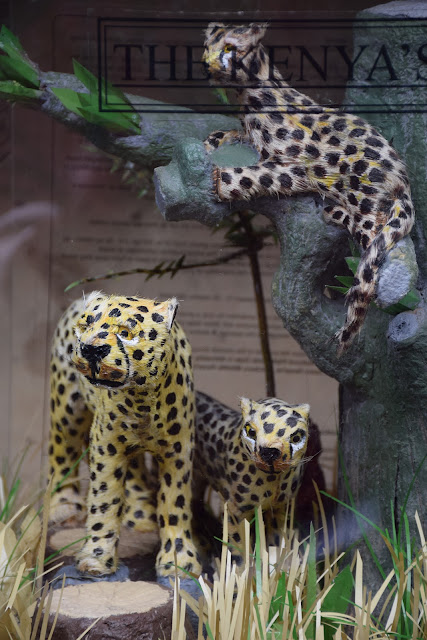 By Margaretta wa Gacheru
The father and son team of Richard Thuku Itundu and Kennedy Ndei Thuku are artists, environmentalists and aspiring businessmen.
Theirs is a noble combination of concerns since they want to create fine art that reflects their commitment to conservation and to raising public awareness about the urgent need to protect our wildlife. 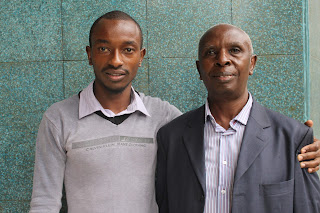 “The big game animals are part of our national heritage. We feel they’ll have a better chance of survival if people know more about them and if they see them up close in the way that we have presented them,” says Richard who’s been making transparent boxes containing hand-carved sculptures of the Big Five since the 1990s.
“But we also started a company called ‘Artfam Creative Designs Kenya’ so we can market our animal sculptures more effectively,” adds Kennedy who, in addition to following in his father’s footsteps by becoming an artist is also a Nairobi University student studying Economics. 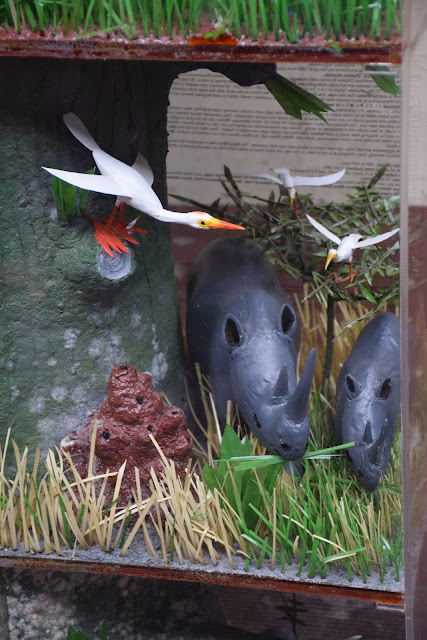 The Thukus are also keen on promoting Kenyan tourism with their three dimensional ‘dioramas’. These are the clear transparent boxes containing everything from cheetah, leopard, elephant, lion and rhino. Each box contains the semblance of a tall tree that’s divided into levels, each one of which contains scenes of the animals within what conceivably is their natural environment.
So for instance, on the ground floor, they have placed a well-carved elephant standing amidst tall grass with flying birds hovering around the animal’s back. On the next level, there’s a lion and lioness, and the top level contains two cheetahs.
The Thukus have worked closely with a wood carver named Kasyoki who created all of the creatures according to Richard’s specifications. 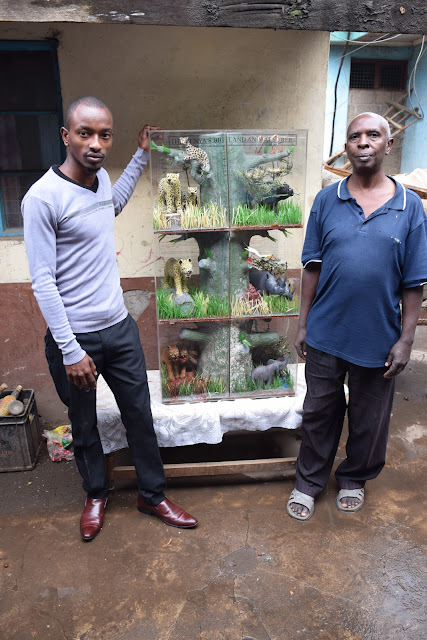 “I’m not a carver, but Kasyoki has helped us create the prototype which we want to use once we get our company off the ground,” says Richard who wants to hire Kenyans who have disabilities but who they would train to recreate dioramas like theirs.
The added educational feature of their dioramas is that basic scientific information about the animals is affixed onto the transparent walls. That way, a student or teacher can easily see the wildlife as well as read valuable data that can inculcate an interest in a child (or an adult) for the country’s wildlife.
“I’d like to present one of our boxes [dioramas] to President Kenyatta,” says Richard who specifically wants to give the Head of State ‘The Kenyan Big Land Animals Tree.’ 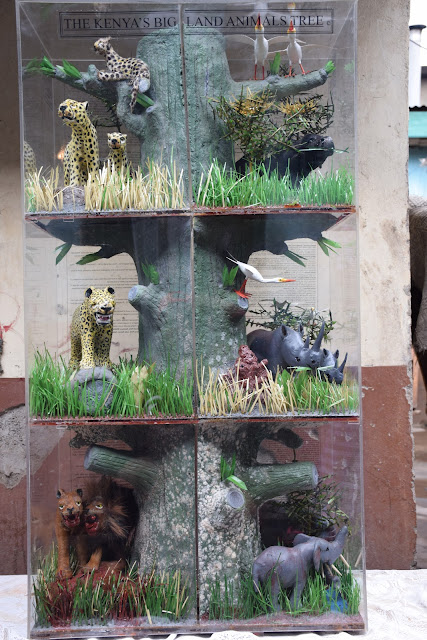 The Tree is their most recent creation and one the father and son team believe would go some distance in promoting Kenyan tourism and the conservation so critically needed to save the country’s Tourism industry.
Richard also shows us a smaller, more compact single level box containing a hungry lion, lioness and their cub. They are all busy devouring the carcass of a fallen buffalo. But this one too is a prototype for construction of more boxes that can be easily displayed and studied for the sake of Kenya’s tourism and the creatures we need to protect as one of the country’s most important natural assets. 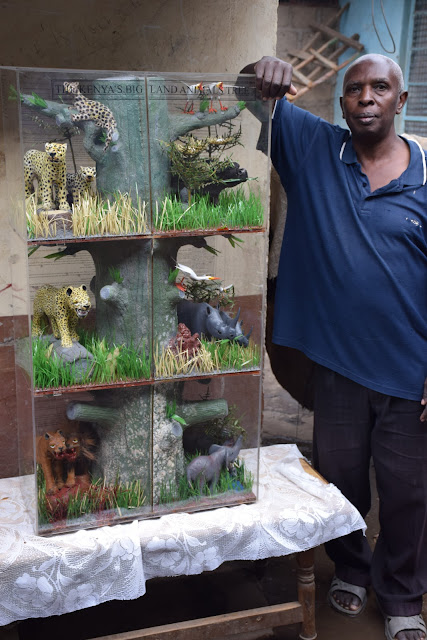 
Posted by Margaretta wa Gacheru at 02:53