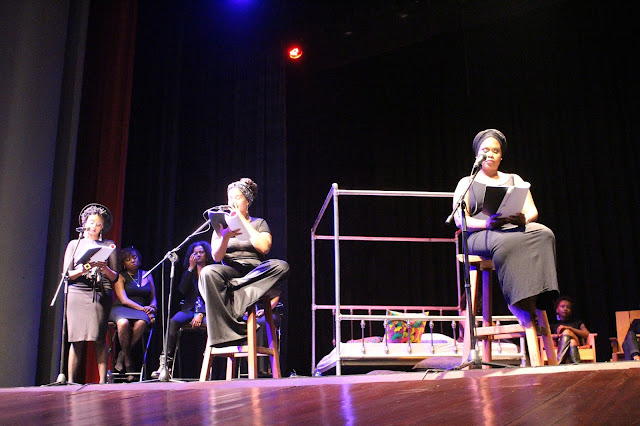 Eve Ensler’s Vagina Monologues have been staged in this country since 2003 when Mumbi Kaigwa first had the guts to join an international community of women standing up and speaking out loud against patriarchy and all forms of violence against women as well as for women’s freedom of expression, empowerment and honest exploration of their sexuality. 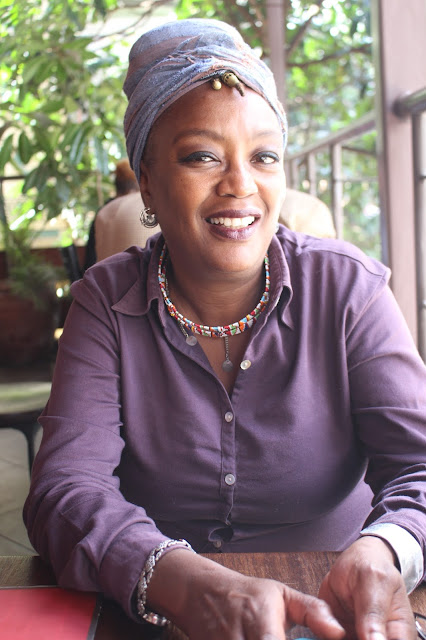 This year the V-Monologues are celebrating twenty years of women’s performing this incredibly powerful script. But this past Tuesday and Wednesday nights at Kenya National Theatre, women were also celebrating 15 years since Mumbi took courage and boldly used that word on stage which was rarely utterly in public in those days.
Back then, she both produced and directed The Monologues. But this time round, she only produced them while Kaz Lucas took the reins and directed 20 beautiful women (including Mumbi and her daughter Mo) in a production that never fails to amaze, amuse, electrify and awaken deep-seated feelings of feminist pride, passion and power. 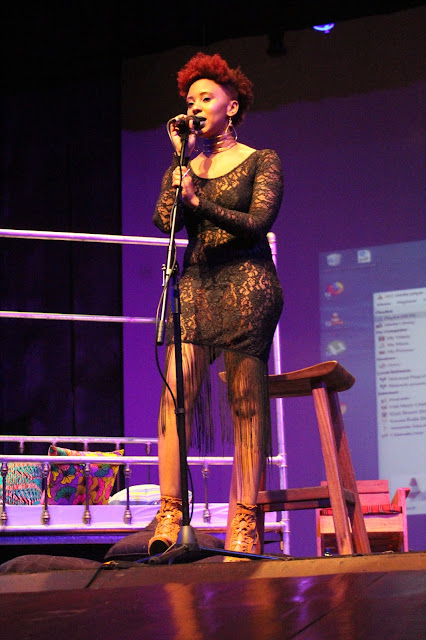 I’ve seen the Monologues several times, four times in Kenya and once overseas while I was in grad school in the States. The first time I think they made me slightly uncomfortable. But then, I was attending a religious university and I suspect I was feeling other women’s discomfiture as much if not more than my own.
But since I’ve been back here and seen Kenyan women perform them, I’ve loved every single show. I’ve also felt the production I’ve just seen is the best one yet. Nonetheless, after every performance, I’ve invariably said the same thing! The women are always amazing entertainers. 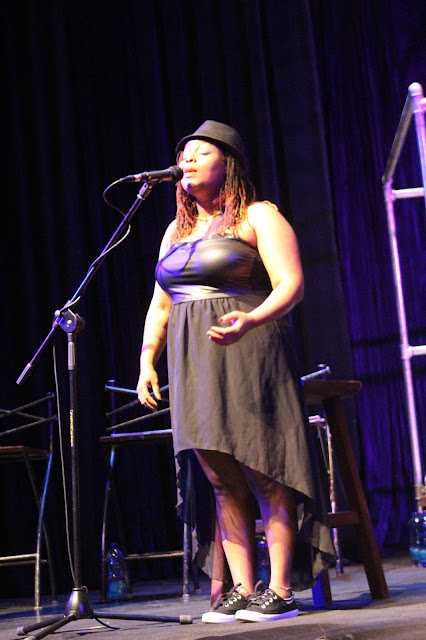 June Gachui performed the National Anthem as well as one Monologue

But in 2018 I was especially impressed with the Monologues. In part it had to do with the beautiful V20 video that launched the production and visibly linked it with those by women all over the world. The video was exquisitely edited combining music and poetry, dance and women working in ways that felt fresh and liberating and attuned to Ensler’s follow-up theme of One Billion Women Rising. Her poem “My revolution lives in my body” was also brilliant and set the stage for this lovely cast of creative beings to come out on stage and share incredible stories that seemed more poetically presented than I’ve heard before. 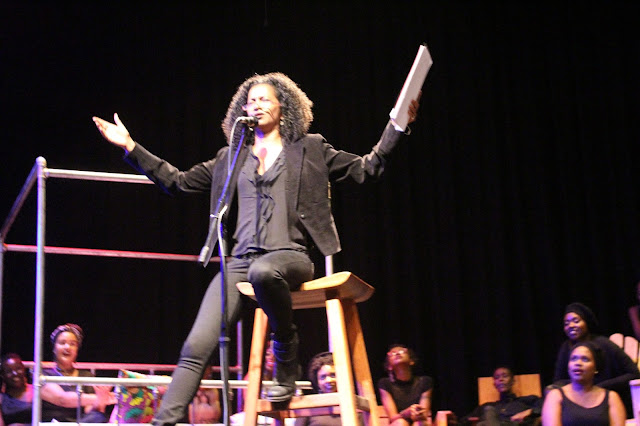 Prior to every performance of The Monologues that I have watched, a kind of apology is made to the effect that not every performer is a professional so ‘bear with us.’ This year they needed no such introduction since all the women performers—not only June, Lorna, Patricia, Mumbi and Mo — gave deeply moving monologues.


Some were funny, others ironic, a few angry or at least militant. But all made one feel proud to identify with the sentiments they expressed. All made one feel amazed that Ensler would have captured such earthy and honest emotions. 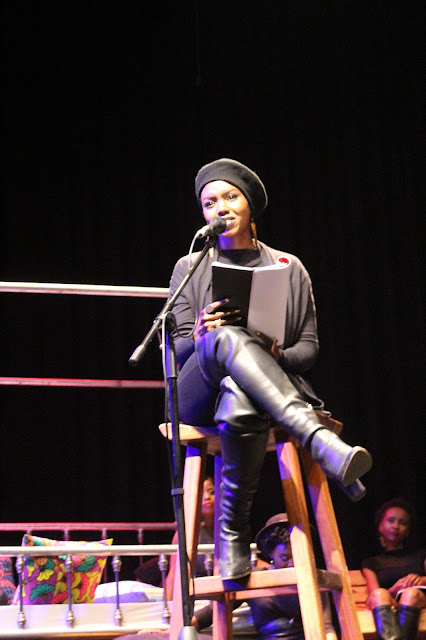 But then, at the outset of the show, we were told that the script actually began as a research project. Hundreds of women were interviewed and what they shared was so revealing that Ensler felt the most poignant had to be adapted for stage, which is apparently how the Monologues were born. 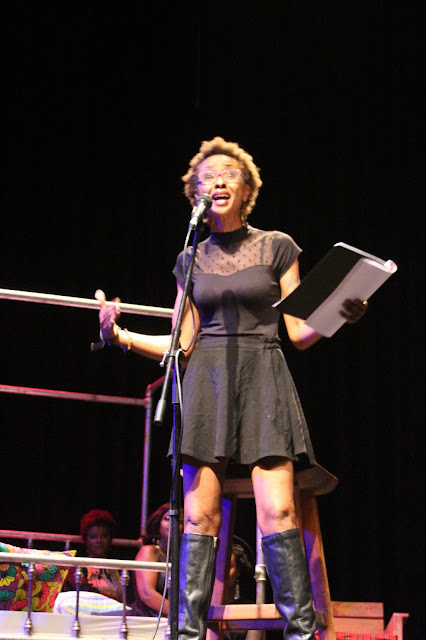 All I can say is I felt honored to attend this year’s performance. I also must applaud the way every woman in every single show that I’ve seen has made the lines her own. That’s meant that every production has felt fresh and stunningly new. 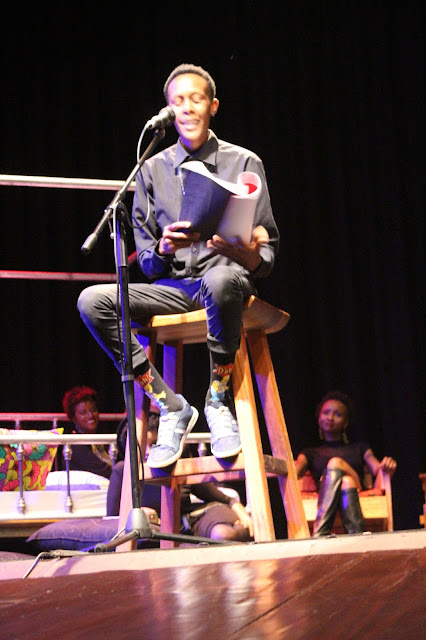 Jenny Mungai was a gem as well


So I thank all of these women and also say I am grateful that the Vagina Monologues has one other amazing benefit. It fosters and fuels a fierce sense of sisterhood, a spirit that I’ve seen at every show. And especially this time round, that sense of sisterhood was blessed and beautiful. For me that’s the true meaning of feminism, so happy V20 and V15 women of Kenya. 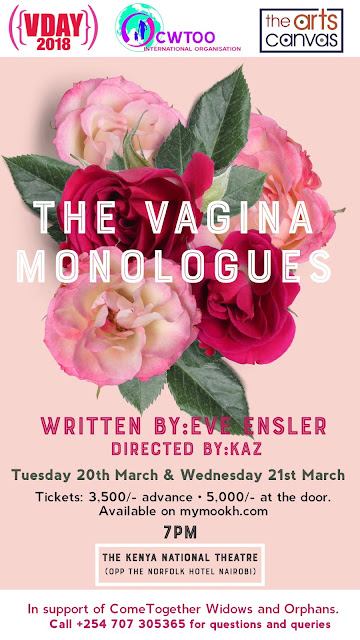 Posted by Margaretta wa Gacheru at 13:03