LIZZIE THURMAN’S TRIBE OF TALKING HEADS AT ONE OFF 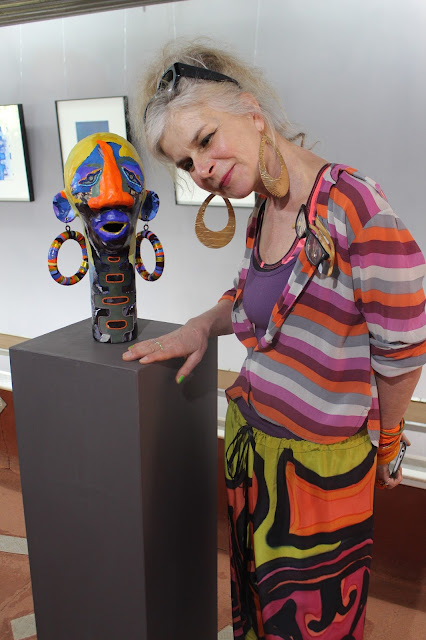 British artist Lizzie Thurman created a whole ‘tribe’ of talking heads back home in her Shropshire studio in the UK.
“I’d been inspired by the shrunken heads of Borneo that I’d seen during a trip I’d taken with my students to the Pitt Rivers Museum in Oxford,” the artist told Business Daily at the opening of her first international solo exhibition at One Off Gallery last Saturday, 24th February. 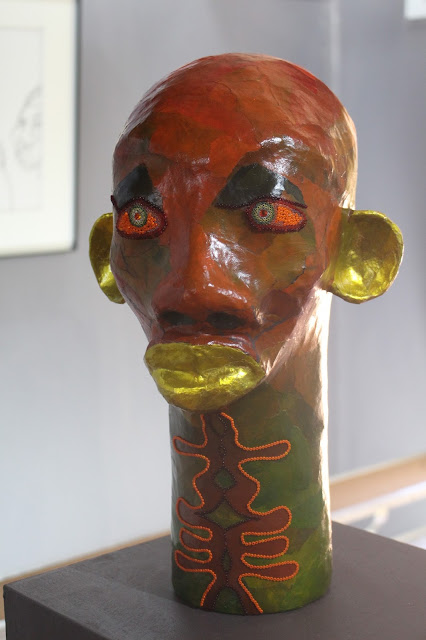 Titling her show ‘A conversation – not quite as it appears’, one has to wonder who’s conversing with whom. Certainly her colorful papier mache heads could conceivably be in a disembodied conversation, given how vibrant are the hues that Lizzie has used to give each one a quality of life that’s quite uncanny.
In fact, Lizzie’s clearly got a personal attachment to each one of her ‘trophy’ heads. She’s even given every one a name of its own. There’s Gabriele (who’s beautified with rhinestones, beaded earrings and gold leaf), Luiz Cruz (who’s mainly coated in blue-black acrylic with the rhinestones and beads in his eyes), Leonard Manly (who’s got full-lopsided lips and somber eyes that are striking for their redness set against shades of green and blue-black skin tones) and Glorious Searle (whose flaming red scull and face contrast with his sunshine yellow lips and ears). 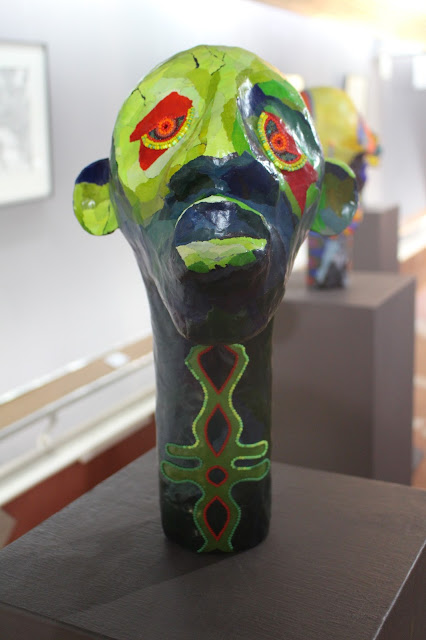 Lizzie has even taken her heads on a cross-continental tour. They exhibited first in London where one of Carol Lees’ friends saw them and suggested they come to Kenya for a show at One Off.  “A few other friends counseled against that idea,” she says. Perhaps they thought her heads might offend Africans since their features are decided sub-Saharan.
Yet in reality, the tradition of headhunting and keeping skulls and heads as trophies isn’t only a practice that took place in parts of West Africa and Borneo. Archeologists tell us it happened all over Europe, the Americas and even in Asia. So it’s just as well that Lizzie didn’t fear that folks in Kenya would be super-sensitive about the resemblance that her heads have with people having full lips and flat noses. 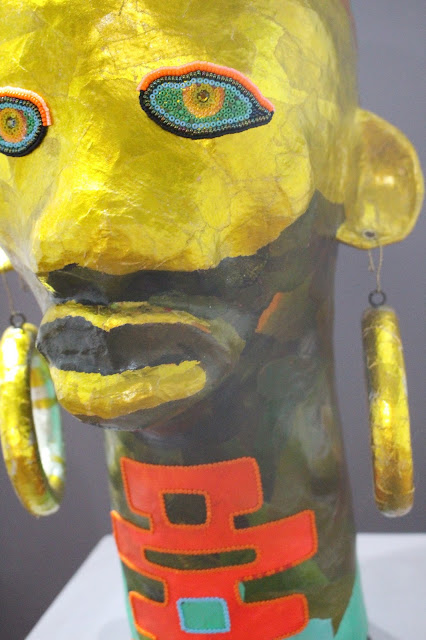 What’s more important is the process by which she created her heads. She hasn’t always worked with papier mache, but since she began teaching more than a decade ago, she’s found that medium most functional, fun and easy to use. Especially when creating three-dimensional shapes.
In her One Off exhibition, Lizzie’s heads come in both 3D and 2D, with her monotype and oils also having been given names like Elisabeth wife 2, Mariene, Thomas and Cody Moon. 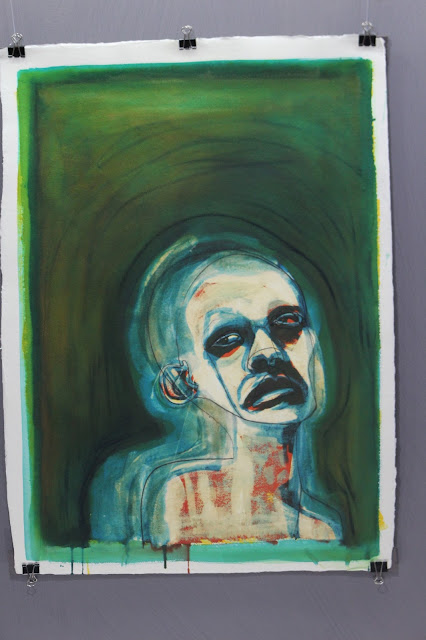 But even her pen and ink drawings have an elegant and powerfully delineated message. It’s called beauty. And somehow it’s even more powerfully pronounced in the drawings since one can’t be distracted by the ornamentation and colorful elaboration and contrasting hues that command one’s attention, whether you intended to look or not.
Considering the impact of Lizzie’s ‘talking heads’ show, one can almost understand why (according to Wikipedia) headhunting was a pervasive cultural practice in history all over the world. And even now, there are records of skulls having been assembled in Vietnam and Afghanistan. 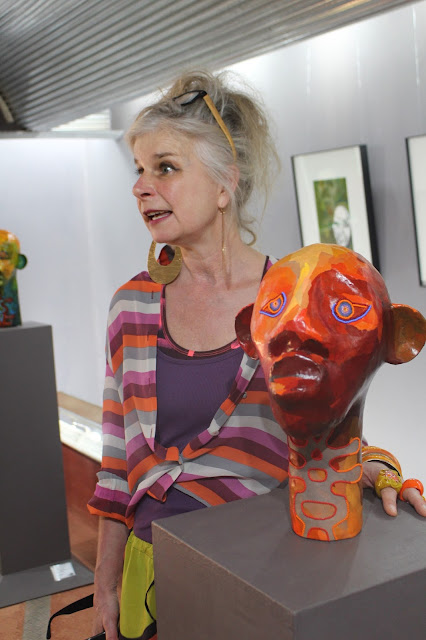 Of course, there no comparison between her heads, which are inspired works of art and those of militant men (or even so-called medicine men) who collected heads for war trophies or rituals’ sake.
But what Lizzie has achieved with her heads is to remind us that beauty comes in all shapes and colors and lines. 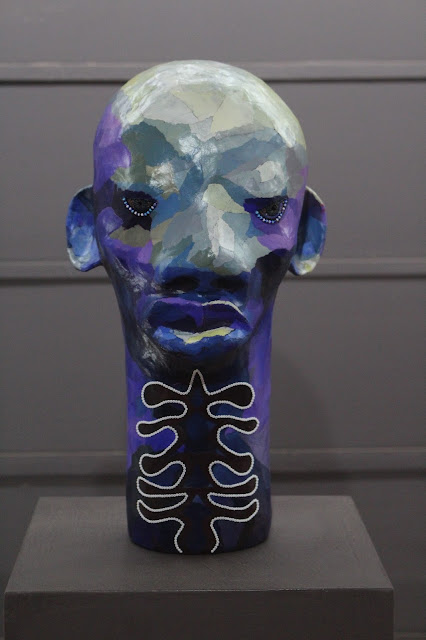 Whether she learned that lesson while visiting the Pitt Rivers Museum in Oxford or at Central Saint Martin’s Art School or in Africa where she’s spent time both in Egypt and Kenya, who can tell. But from the way she shamelessly assembles colors that ‘clash’ and contrast, one can easily appreciate how Lizzie also worked for years as a stylist with high-fashion magazines like Vogue, Tatler and Elle. 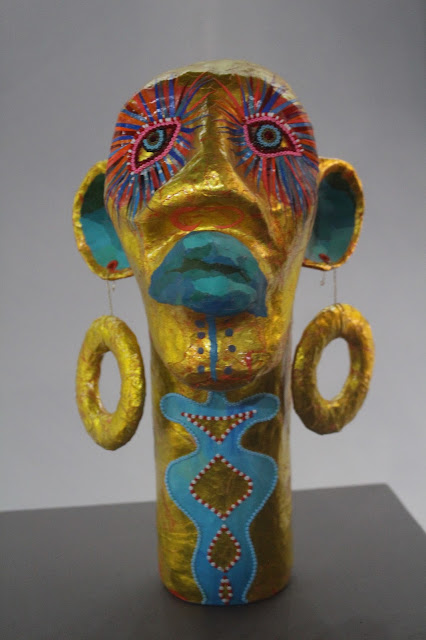 Her exhibition will be up until 3rd April and she’ll be giving art talks around the region between now and then. But if you can’t meet her in person, her heads will be around till then and they are well worth seeing and hearing what they have to say. 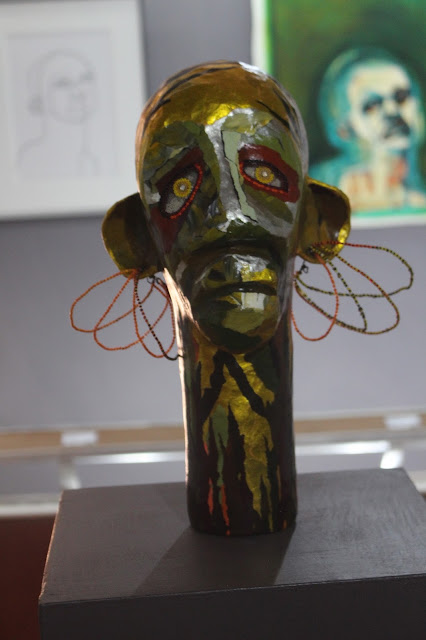 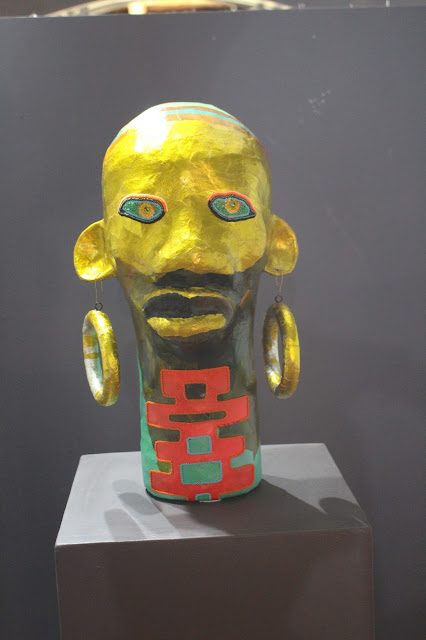 Gabriella and Mindful Ibrahim
Posted by Margaretta wa Gacheru at 06:35