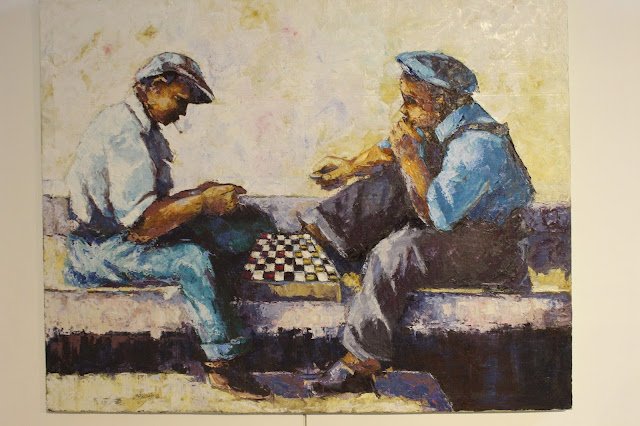 The Gamblers by Wilson Matunda 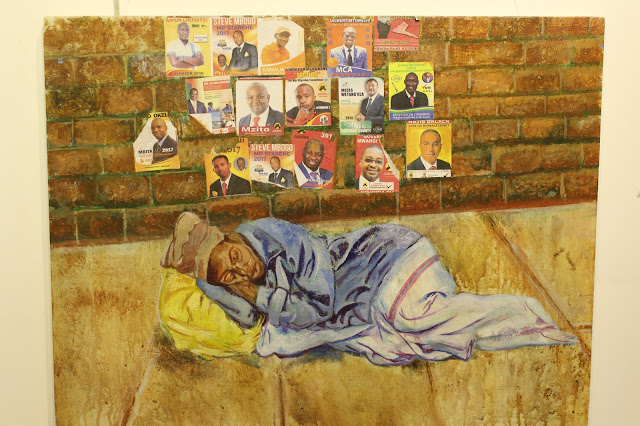 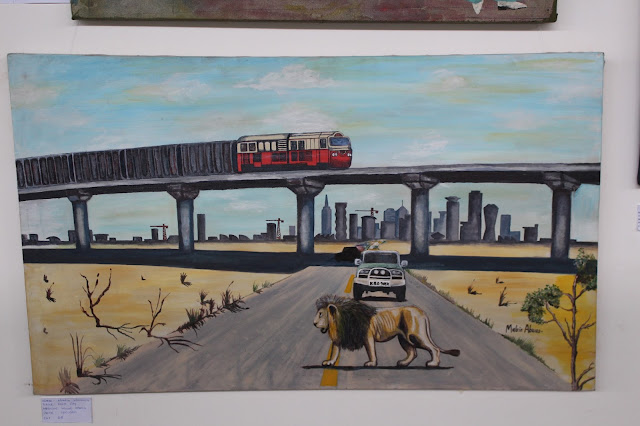 One of the best things about the Manjano Art Competition and Exhibition this year is that it looks like a fairly accurate reflection of where the contemporary Kenyan art scene is at right now.
That’s to say it’s a mixed bag, filled will heaps of creative expression and artistic initiatives that are diverse. For instance, the art materials on display at Village Market 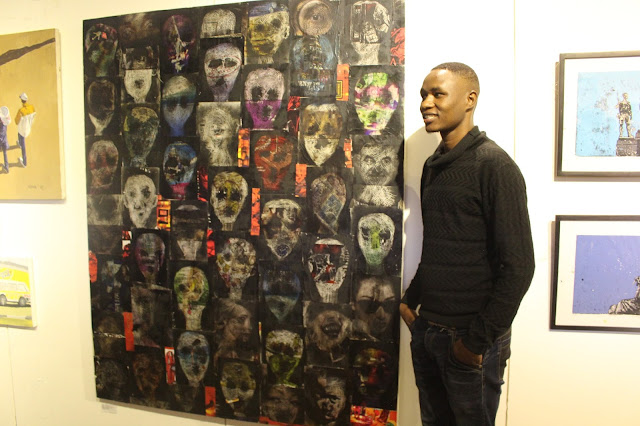 Wallace Juma won 1st prize of Sh300,000 for his painting
until 5th April range from more conventional media, such as acrylic and oil paints, charcoal, chalk and woodcut prints on paper to rusted mabati and some mixed media.
But then, there is also a bit of image transferring and digital art, beadwork on wire, recycled milk packaging and grafted wood on stone. One artist even used old paint brushes as characters in his art. 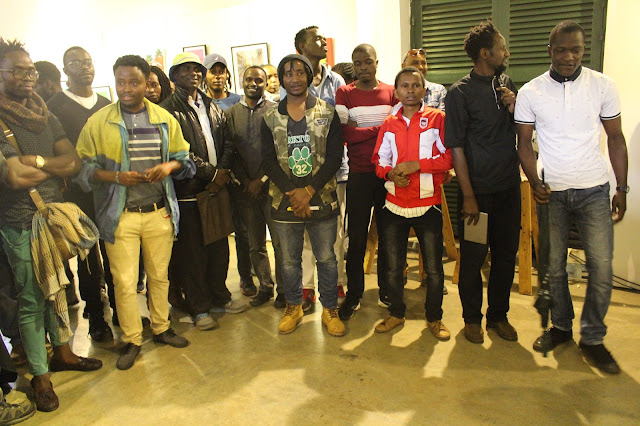 With the usual theme of the exhibition being our city Nairobi, there are several cityscapes, especially ones revealing Nairobi by Night. A few are abstract like the ones by Yasir Mohammed and Agnes Njoroge. 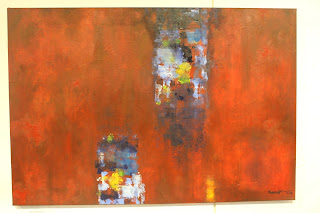 But there are more that interpret a range of social realities prevalent in our city currently. One that stands out as exposing the incongruities of our city life is by Malvin Abwao (although labelled as being by Nadia Wamunyu). ‘For the scale of development’ is apparently set inside Nairobi National Park, with the SGR already built and a speed trai whizzing passed a highway that also runs through the park. City skyscrapers are in the distance and a car is coming our way just as a magnificently-maned lion meanders across the road. It’s positively dystopic.
There’s another SGR painting with a similar theme by Rohini Sengani but it’s not nearly as disturbing as Abwao’s. 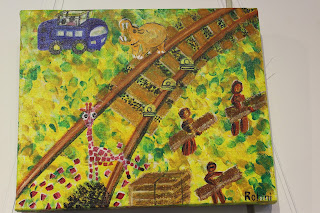 Nonetheless, this year’s Nairobi County Visual Art collection is steeped in paintings intent on making social statements. For instance, Ron Luke’s “Sold Out” is clearly a symbolic commentary on corruption in the judiciary. 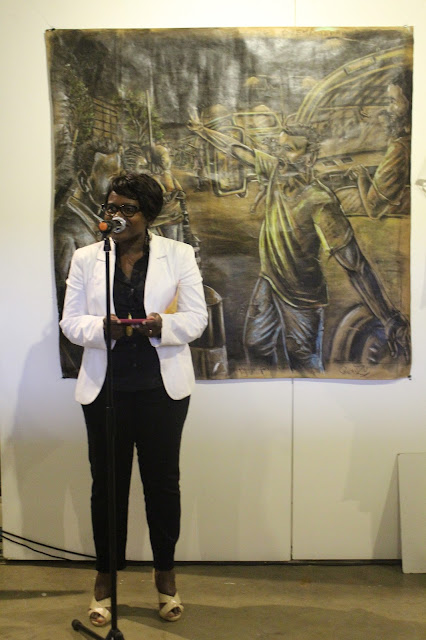 Peter Walala, whose ‘Political twists and tangles’ also implies the disturbing trend in national politics which are less than straight forward and clean. The fact that the artist “grafted” tree branches onto each other to create the ‘tangled’ effect is also ingenious. So it’s no wonder Walala won another Manjano award. This year he earned the second prize in the professional artists’ category, translated as a Sh150,000 cheque. 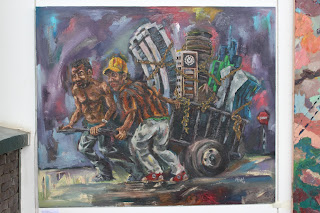 The winning artist in the adult or ‘professional’ class is Wallace Juma for his collage painting, “Pata Potea”. It’s a dark work, both in color and psychic effect since it seems to be commenting on a profound question of identity in a city that leaves a multitude feeling rootless, homeless and lost. The judges, (namely Bobbi Gassy, El Tayeb Dawelbait, Flora Mutere-Okuku and Mary Ogembo) clearly felt Juma’s piece was poignant since his prize is Sh300,000. 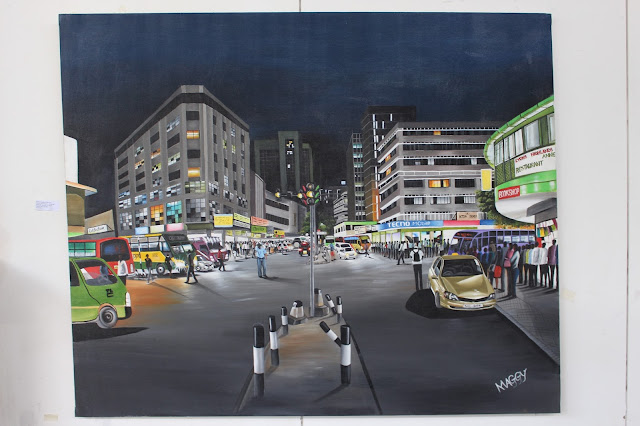 Themes of poverty, homelessness and coping with city life are also apparent in this year’s show. For instance, Taabu Munyoki’s ‘Oblivion’ portrays a homeless woman sleeping on the street beside a set of brightly colored political posters. Again, it’s the juxtaposition of poverty and plenty that is painfully touching.
But Kenyans’ resourcefulness is also revealed in many of the works. It’s visible in works that portray Hawkers and matatu manambas, mkokoteni men and bicyclers balancing bread and water, and even motorcycle taxi drivers (with Hezbon Okoth’s five-panel piece winning first prize in the students category) 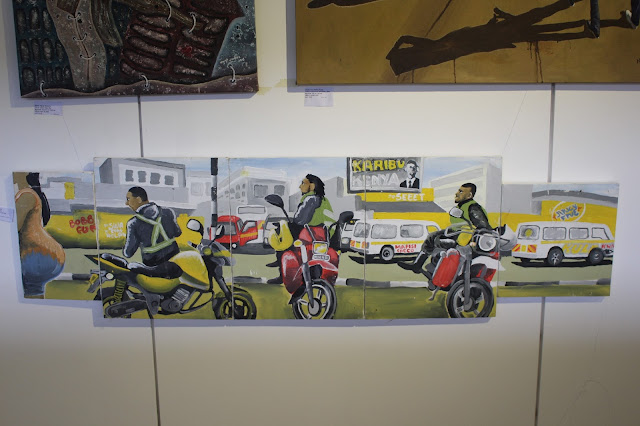 The other beauty of Manjano is that some of the most seasoned so-called ‘professionals’ are shameless about having their art hung in close proximity to newcomers like Wallace Juma whose art was relatively unknown before he won the top prize this year. 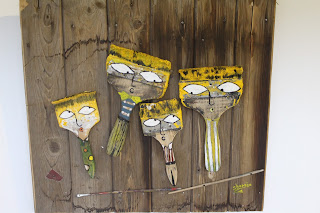 What was also clear-cut about Manjano 2018 is that many artists experimented with themes and social practices that are common today. For instance, Evans Yegon’s ‘Selfie’ mirrors a motion we see often on our city streets. Ngugi Waweru took up the topic of gun violence in both prints that made it into Manjano this year. 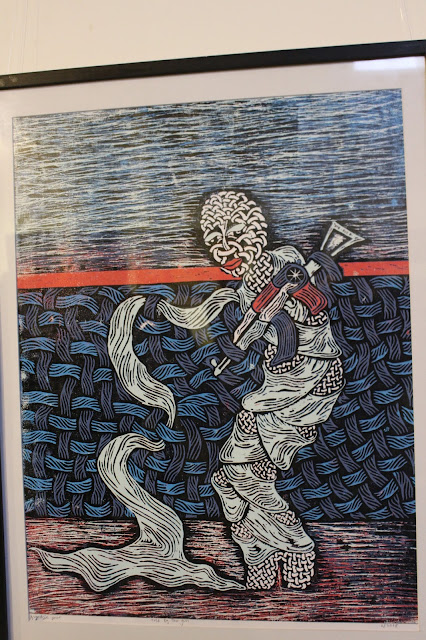 Ngugi Waweru took on the theme of gun violence and servitude


There are over 80 artworks in the exhibition. According to Judy Ogano, there were 250 submissions from artists this year which suggests the judges were judicious and selective. There’s just to one piece that I feel deserves a special commendation: Erick Musau’s extraordinary ‘Beaded Human Sculpture’ which had an uncanny resemblance to a real human being. 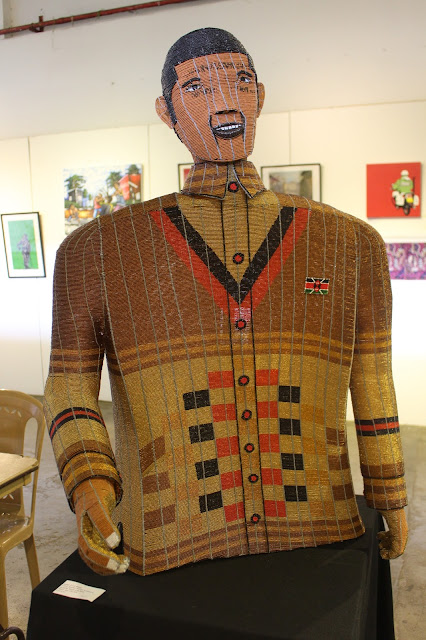