HAWKERS HAVE A PLACE IN WANJOHI’S ART WORLD 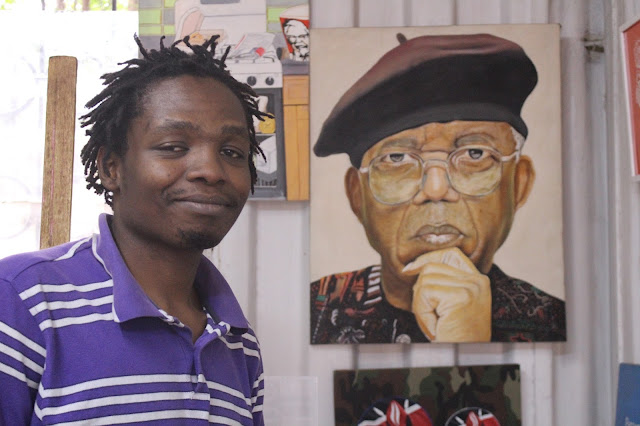 Anthony Wanjohi with his portrait of Chinua Achebe

Anthony Wanjohi has never had an identity crisis. He knows he’s a born and bred ‘Nairobi boy’. More specifically, he’s an Eastlander from Bahati, which gives him on edge on the subject matter that he’s currently focused on illustrating in his art.
“A lot of the people that I paint are from my neighborhood,” says Wanjohi who’s been fixated on creating art works around the hawkers of Nairobi ever since he created paintings to submit to the GoDown’s annual art competition of 2017. 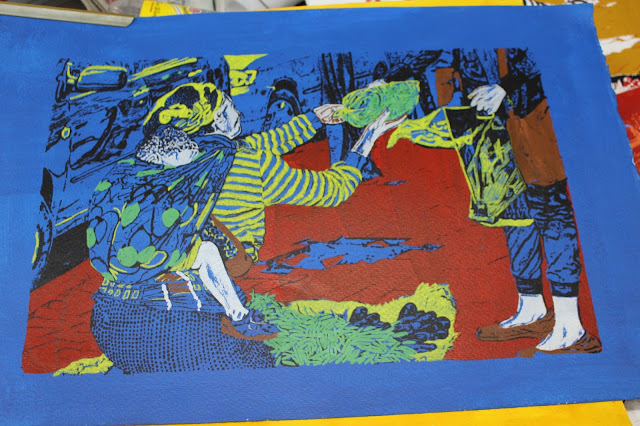 “For that show, I painted traffic jams, matatus and hawkers,” says the Kuona-based artist. “I didn’t win [Manjano 2017], but it got me interested in doing more [artistically] with the hawkers,” he adds.
Unfortunately, the ad hoc street sellers that charmed Wanjohi into transforming their lives into photos, prints and paintings can hardly been seen in Nairobi’s city centre anymore. They’ve been cast out of town as undesirables. (Ironically, the street venders have been replaced with scads of glue-sniffers who can be found on nearly every street corner at night in the CBD.) 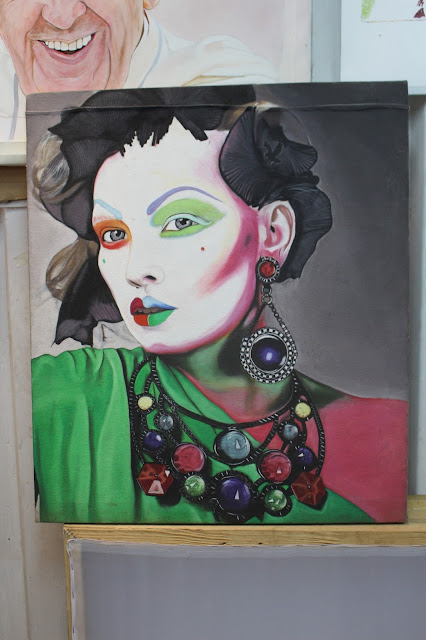 Fortunately for Wanjohi, he had already built up a substantial archive of images of hawkers, working people who are trying to make a living selling whatever they can on the streets. He’s taken photographs of jua kali salesmen of sweets, sausages, hard-boiled eggs and screw drivers. He’s also snapped (with his humble Nokia smart phone) mamas selling everything from githeri, chapati and steamed maize to spinach, garlic and French beans to bottled water and chewing gum.
“The lady who sells sweets on the street [between cars that are standing still at red lights] always seems to be more successful than the guys,” observes Wanjohi, speculating that it’s probably got a bit to do with her sweet smile. 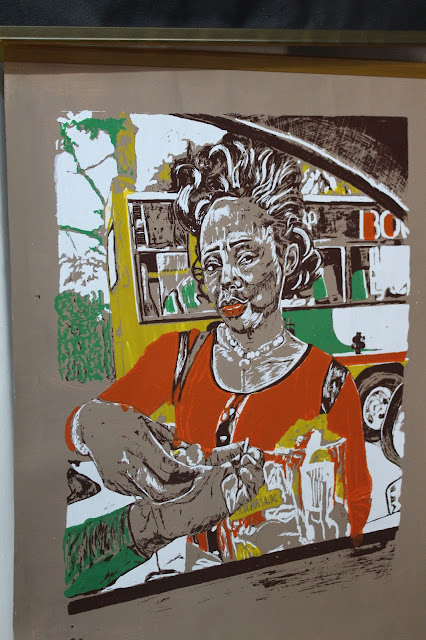 In any case, it’s those images that the artist translates into paintings or prints. Increasingly, he’s working with prints while using a variety of colors. “I’ll work with the same image but print with various colors,” says the artist who describes himself as ‘self-taught’ but admits he’s found inspiration online, in newspapers and glossy magazines. 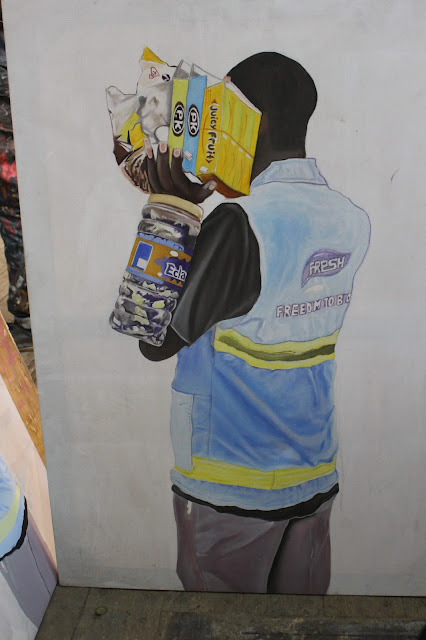 “When I was at Pumwani Primary, I used to trace comics like Andy Capp and Tin Tin,” says Wanjohi who never took an art class in either primary or secondary school. “I also liked trying to draw like Gado and Madd in the local newspapers,” he adds.
In secondary school in Kitui, he got involved doing set designs for school theatre productions. “My last two years in secondary, I created backdrops for school plays, which I really enjoyed,” he says.
Soon after school, he heard about Kuona Trust when it was still based at The GoDown Art Centre. “From 2005, I used to hang out there and look at the artworks,” he recalls. But due to financial constraints, he wasn’t in a position to pay rent to join either Kuona or GoDown. Instead, he worked at jobs that put bread and butter on the table.
“I pumped gas for a few years. I also did some construction work,” he says. Nonetheless, Wanjohi felt the one thing he could do well was his art. When he wasn’t working 7-5, he was either drawing or keeping track of the local art scene through Facebook and his regular trips to the cyber café. 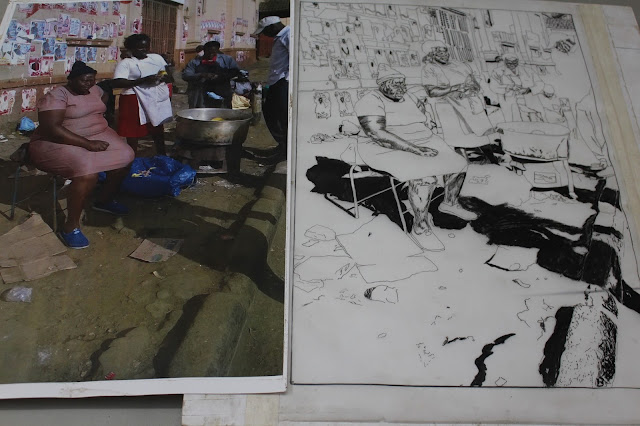 By 2016, he finally figured he had better take his art more seriously and went to apply for a studio at Kuona Trust, which was recently re-named the Kuona Artists Alliance. “I finally got space there in January 2017, and I’ve been there ever since.”
Initially, he was painting, but then he was shown how to make prints by David Thuku, one of the founders of the Brush tu Art Studio who is currently based at Kuona. He now spends practically all his time creating vivid prints of Nairobi’s ‘jua kali’ sales folk. Unfortunately, the City Council still wants to treat them like vagrants; but to Wanjohi they are some of the hardest working people in town. 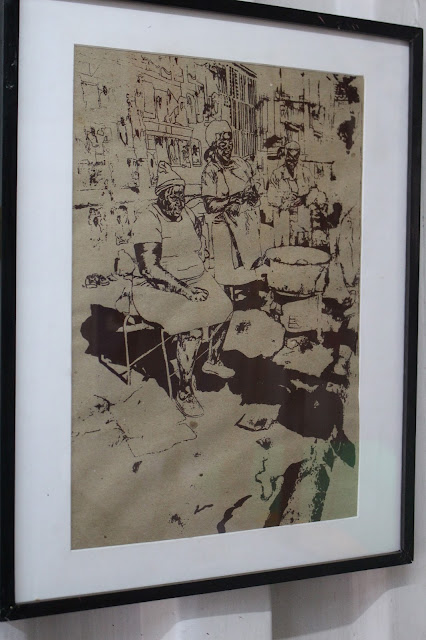 Wanjohi’s ‘Hawkers’ series of prints can be most easily seen by visiting his studio at Kuona in Kilimani. 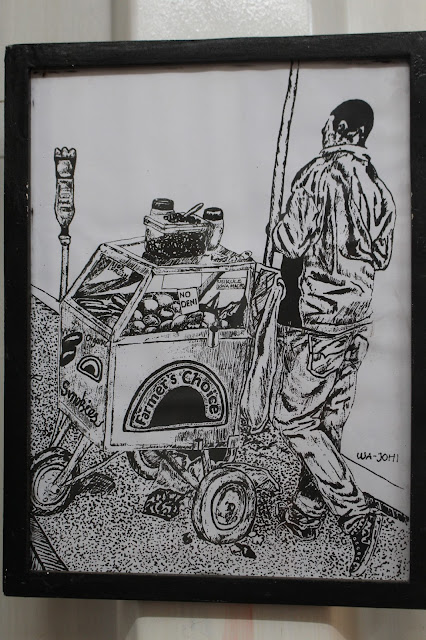 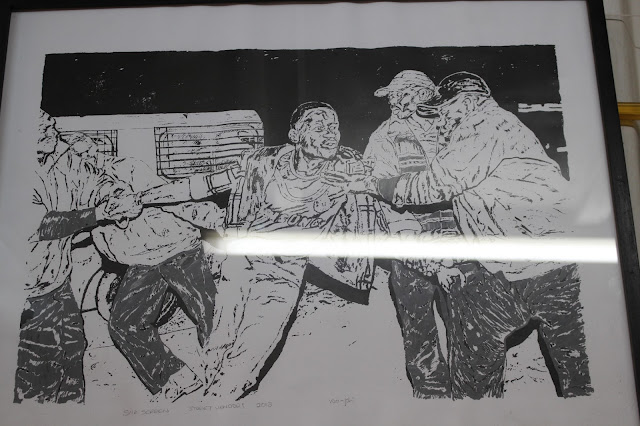 Posted by Margaretta wa Gacheru at 06:41