STEPHANO'S FINANCIAL MANAGEMENT IS KEY TO SUCCESS OF LA SALUMERIA 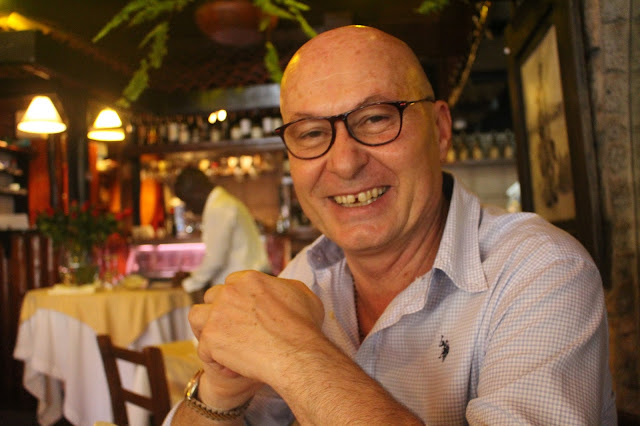 Stephano Rusticali, 57, spent most of his life in Italy working as an accountant and financial consultant. He was one of the few members of his family that wasn’t involved in the tourism and hospitality industry. But he’d always been good at numbers and enjoyed designing business plans for others.
But when his two sons finished school, he decided to visit his cousin Guido who had up-market Italian restaurants in Watamu at the Kenyan Coast. 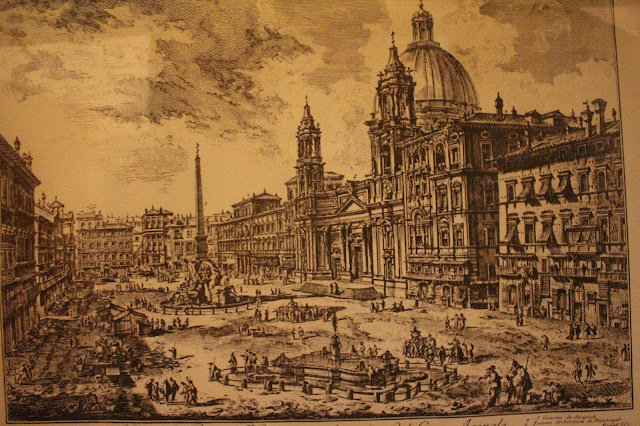 “Both catered mainly to Italian tourists,” says Stephano who was inspired by his cousin’s initiatives. They encouraged him to make a major life change and partner with Guido in starting up an Italian restaurant of his own at the coast.
“The Geko would cater to a more international clientele,” says Stephano whose background in financial management meant the restaurant quickly turned a profit. That was in 2014.
But then as he saw tourism slowing at the Coast, Stephano heard about an Italian restauranteur in Nairobi who wanted to retire and sell his business.
Stephno frankly didn’t have the cash to buy the business flat out. But when he went to see the place, which is just behind Valley Arcade in Nairobi, he liked what he saw. He felt it had immense potential although he’d want to make some major modifications. 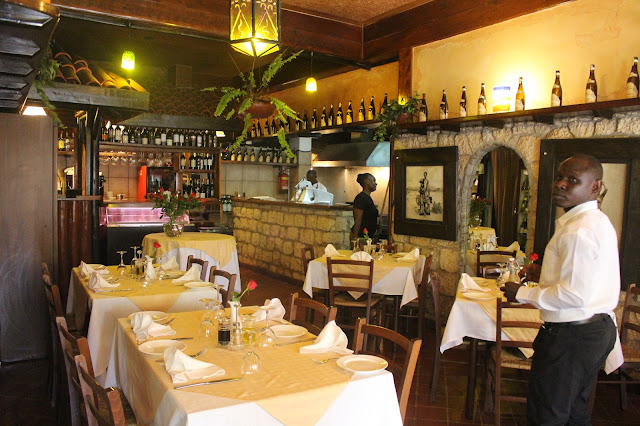 “Guido agreed to partner with me. Plus we had been working with another Italian, a top chef who agreed to come in on the business as well,” says Stephano who made a deal with the outgoing owner. “He’s letting us rent the business for the first two years, after which we will buy the restaurant outright,” he adds.
In the meantime, Guido’s agreed to take over management of the Geko. “Although I go to check the books twice a month,” says Stephano who knows his biggest asset to the business is his financial managerial skills.
Once he took charge of the restaurant he renamed La Salumeria, he decided the best way to distinguish his place from other Italian eateries in town was to only serve foods that are authentically Italian.


“The name ‘La Salumeria’ itself is an Italian word referring to a shop that sells all sorts of Italian cheeses, cured meats and other specialty foods essential to preparing authentic Italian dishes, the kind you find at my restaurant” he tells Business Daily.
Pointing to the condiments on one table for four, he notes that the salt came from a city in Sicily, the olive oil from Tuscany and the Balsamic vinegar from Modina. What’s more, everything from the cheeses and sausages to the wines and assorted spices are flown in directly from Milan. Even the paintings on the wall, the music and the hanging hand-painted glass lampshades are Italian. Even his espresso machine and the macchiatos and cappuccinos that he brews with it come from Italy.
Stephano says the other important factor that ensures authenticity of La Salumeria’s food is Top Chief Murielle Minchella who’s taught all his Kenyan staff how to prepare fine Italian pizza, pasta and pastries for his guests. Plus he just recently brought in a top Sicilian chef who taught his staff special Sicilian recipes so that now La Salumeria has a new Sicilian menu with a whole new set of Italian dishes. That includes the Caprese chocolate and almond cake which again is made with all Italian Ingredients.
That close attention to creating a total Italian eating and cultural experience is paying off for Stephano who admits it wasn’t easy at the outset, especially since nobody knew the restaurant had a new owner, new menu and totally new ambience. But gradually, news has gone round that there’s a newly renovated and authentically Italian restaurant in town.
Stephano admits he sources all his fresh fruits and vegetables locally, and he gets his fish flown in regularly from the coast.
But his Italian cheeses are flown in once a week from Milan. But since none of them contain preservatives and he only serves the freshest of foods, Stephano he offers his cheeses for just a few days every week. After that, one has to wait till early the following week to get the burrita especially.
The other reason La Salumeria is doing well, despite only having taken over the business in 2016 is that the accountant in him has never stopped keeping a close track of the accounts. This he says is key to running any successful business.
or the other version of same story:

AUTHENTICALLY ITALIAN
By Margaretta wa Gacheru (posted 2 March 2018)
Stephano Rusticali comes from a family fully involved in the tourism industry in Kenya. His cousin Guido Bertoni has one Italian restaurant and one boutique hotel in Watamu which cater mainly to Italian tourists coming from overseas.
An accountant by training, Stephano had only worked in Europe until 2013 when Guido encouraged him to come to Kenya and start up an Italian restaurant and hotel of his own.
Thus, the Geko Resort was born in 2014. Taking Guido’s boutique hotel as a model, Stephano says he aimed to cater for more of an international clientele than his cousin’s. And having been a business consultant most of his life, he got the Geko up and running in no time.
But as Stephano’s two sons are now grown men, he’s been enjoying his freedom and was keen to branch out a bit. An Italian friend who has a wine shop in Kilimani told him about an Italian restaurant in Nairobi that might be coming up for sale since the owner wanted to retire. Stephano was curious, and now he’s rented and renovated the place with a view to buying it in two years’ time.
Situated just behind Valley Arcade in the Dhanjay Flats, Stephano opened La Salumeria in 2016. Intent on making it the most authentic Italian eatery in Nairobi, his main marketing point for distinguishing his place from the rest is the authenticity of both the food and the Italian ambience of his new place.
‘Everything in the restaurant is Italian, from the paintings on the walls to the music in the background to the menu which has an extensive variety of dishes freshly prepared.
“We don’t only serve pasta and pizza,” says Stephano who nonetheless is proud of everything his kitchen prepares. “We also serve various meats [beef, lamb, pork and fish] and we also have a brand new Sicilian menu.”
Yet Stephano admits it’s not cheap to bring in whole containers full of Italian food-stuffs twice a month, but it’s worth it, he says.
Clearly a man who’s passionate about his culture as well as his cuisine, Stephano imports everything from Italian cheeses, wines and chocolates to cured meats and porceini mushrooms.
“We also bring in olive oil from Tuscany, Balsamic vinegar from Modina and even salt from Sicily,” he adds.
Having a professional background in finance has helped his business grow more quickly than many start-up firms could hope. “But I have experience keeping watch over the finances as well as on the incoming supplies,” he says.
It also helps to have Italian friends in Nairobi as well as at the Coast since they helped him find a reliable local farm to provide all the organic vegetables he requires every week. “I also get my fish flown in regularly from the Coast.”
But as important as are the Italian food stuffs, Stephano says food preparation is also key to La Sulermia’s success. He admits he’s fortunate to have as his business partner Murielle Minchella who’s a Top Chef.
“I’ve known Murielle since I first came to the Coast in 2013, and I’m happy she agreed to come to Nairobi where she’s trained our entire kitchen staff in the fine points of Italian cooking.”
Just recently, Stephano also brought a top chef from Sicily to train his staff in Sicilian cooking. For instance, his pastry chef Margaret was shown how to make a Caprese cake with chocolate and almonds from Sicily.
“Margaret also makes our almond and hazelnut parfaits, as well as the chocolate mousse,” her boss explains as he introduces us Margaret, a lady who’s been making Italian pastries for the past decade, having she worked under the previous management.
One other critical feature of La Salumeria is its brand new expresso making machine which Stephano says is the finest one made in Italy. And as Italian coffee is considered some of the best in the world, Stephano doesn’t regret making the investment since every Italian meal must culminate with a cup of espresso or cappuccino.
“But we also make limoncello in our kitchen from imported lemon rind,” he says, knowing that few if any other Italian restaurant in town can boast of making their own lemon liqueur.
The crowning feature to Stephano’s Italian showcase is his new Artistest Gallery which just opened December 20th 2017. “Currently the photography of Gian Paolo Tomasi is here. But in future we hope to see Kenyan artists exhibiting in the gallery as well.”

Posted by Margaretta wa Gacheru at 07:28