AMREF ASSISTS MOST VULNERABLE ON THE GROUND AND IN THE AIR 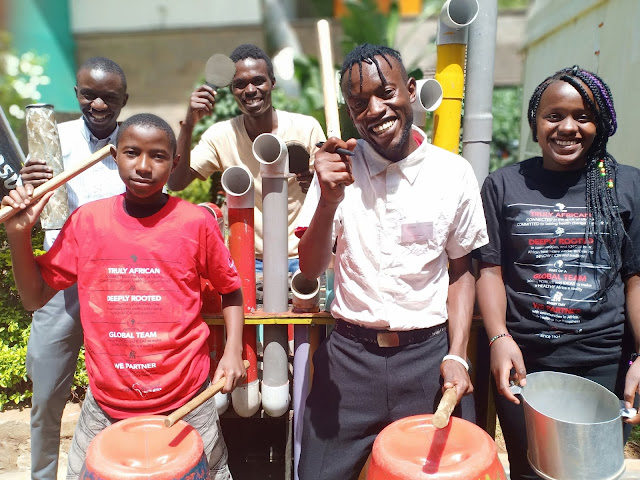 Making musical instruments out of trash is one of the many skills that former street children learn once they reach the AMREF Child Protection and Development Centre in Dagoretti.
It’s the skill that enabled Martin Murimi to transform a nyatiti into a replica of the ancient Golden Lyre of Ur, both of which he now plays everywhere from Hotel Intercontinental and Sarova PanAfric to African Heritage House with his Papillon band.
It’s the same skill, among others taught at the Centre, that Evans Oluoch, 26, now teaches to other former street boys and girls who often become members of AMREF’s Jua Kali Drummers.
“It was Giovanni Lo Cascio, who came to Dagoretti from AMREF Italy who didn’t just teach us to make our own musical instruments from junk,” says Murimi who’s now known professionally as Papillon (meaning butterfly in French).
“Giovanni is also the one who started the Jua Kali Drummers back in 2009,” he adds, noting he first auditioned to be a singer with the group. “Then after two years of coming daily to the Centre and practicing with the group, I was promoted to drummer-composer.” 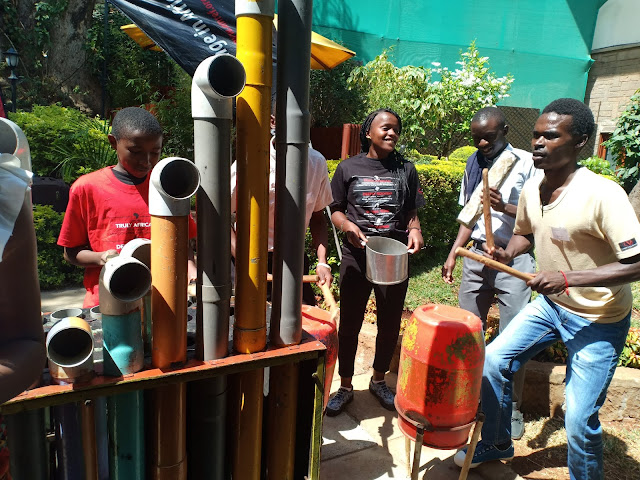 Both Evans and Martin are first generation Jua Kali Drummers. Both had the chance to perform with them in many places, including the Umbria Jazz Festival in Italy.
“While in Umbria, I received a certificate from the [prestigious] Berklee School of Music [in Boston] which has a branch in Italy,” says Murimi who completed Standard 8 in rural areas before coming to Nairobi looking for his father. He didn’t find him, only the dad’s second wife who didn’t welcome the first wife’s son into her home.
Cast out into the street where he says he hustled to stay alive for two years, Murimi was working as a cobbler when one client insisted on taking him to AMREF’s Child Protection Centre. 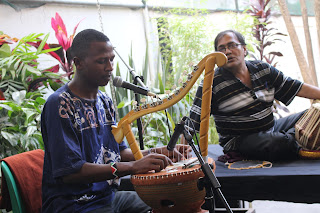 “I consider AMREF my mother since it was she who gave me an education and a future,” says Murimi who started off, like all children fresh off the street, in the Centre’s ‘rehabilitation’ program. That is where he began learning everything from painting, drawing and drama to music, dance and filmmaking.
Often taught by professionals like Giovanni, Murimi like everyone who goes through that first one-year training is called a ‘bingwa or Champion. That includes the music and theatre Coach Oluoch who had both his primary and secondary school fees paid by AMREF and is happy to be in a position to give something back to youth who, like him, found their way off the street and into the Centre.
Even the current eighth generation of Jua Kali Drummers are bingwa, adds Paul Otieno whom AMREF assisted to get all the way through Multi-Media University. 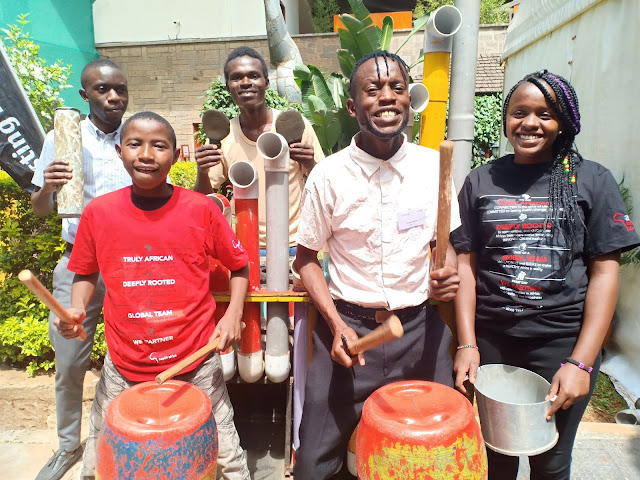 That includes Daisy Wambui, 18, who plays shakers (made out of iron sheets, seeds and stones) when she’s not studying to be an auto mechanic through the Centre. It also includes David Njoroge, 16, who studies auto mechanic with Daisy. But with the Drummers he regularly plays the Tuba-phone which is loosely modeled after the xylophone. “Only our tuba-phone is made with PVC pipes, the kind normally used on sewage lines,” adds Kelvin Ngaira who also had his primary and secondary school fees paid by AMREF after which he won a scholarship to study music at the National Youth Academy.
Founded by Sir Michael Wood, Archibald McIndoe and Thomas Rees back in 1957, AMREF was originally known as the Flying Doctors air ambulance service, which it still is. But AMREF’s vision is so large, they inevitable had to assist the most vulnerable on the ground, not just in the air.

Posted by Margaretta wa Gacheru at 12:05