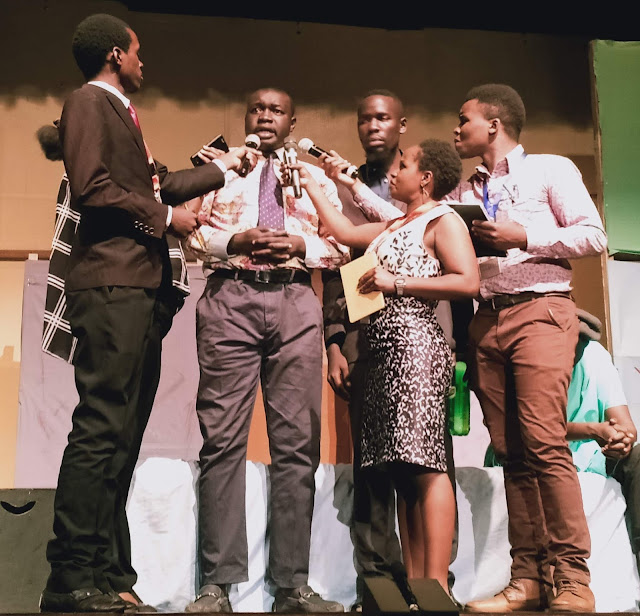 You didn’t have to see ‘Necessary Madness’ by Hearts of Art late last year to appreciate the sequel when it premiered this past weekend at Kenya National Theatre.
‘Necessary Madness 2-Deliberate Contempt’ can stand on its own although it might have enhanced one’s appreciation to know that NM1 was a social satire on corruption and its trickle-down effect on an entire population. 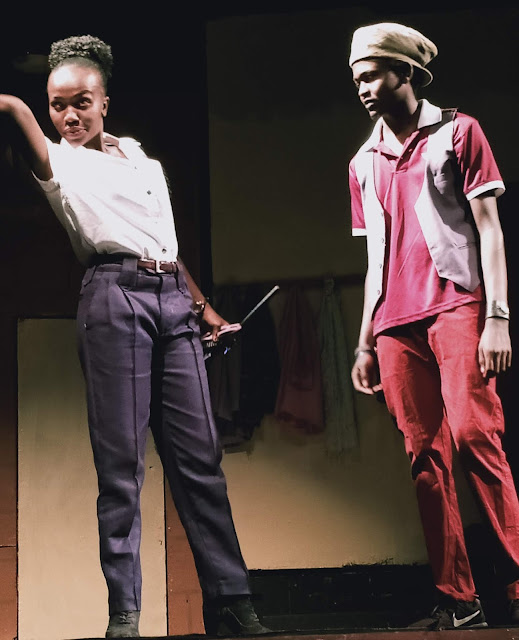 In the Kenyan case, it doesn’t just trickle-down. It infects everyone from political elites to lowly traffic cops to reckless matatu drivers prepared to risk their lives and those of others rather than keep their mat’s in good repair while also obeying traffic laws.
There are a few individuals who still value integrity, honesty and justice in NM1, like Nessa’s lawyer mother Lesedi (Veronica Waceke) and the talented techie teen herself (Frazier Chilande) who puts up a website meant to chart corruption cases, including video footage of eye-witness accounts of wrong-doing. 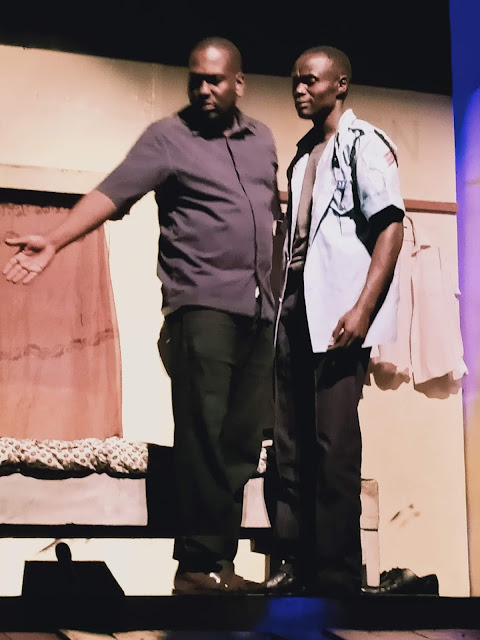 What they don’t expect, however, is to receive footage of Nessa’s traffic cop father Dakarai (Peter Kawa) soliciting a bribe from a woman driver (Jacky Vidzo) who’s rushing to get her pregnant sister to hospital. The delay leads to complications and the sister dies.
What’s worse is that Dakarai also releases a faulty matatu at the instruction of County Governor Zuri (Benson Amare) who also owns the matatu. It’s that very matatu that subsequently crashes and kills the Governor’s daughter Ziki (Azziad Nasenya) who is also Nessa’s best friend.
NM1 ends tragically and abruptly with the demise of Ziki, the collapse of her dad and confusion as to what is to be done with Nessa’s corrupt cop dad. We are left with a teetering cliff hanger that members of the public wished could be resolved. 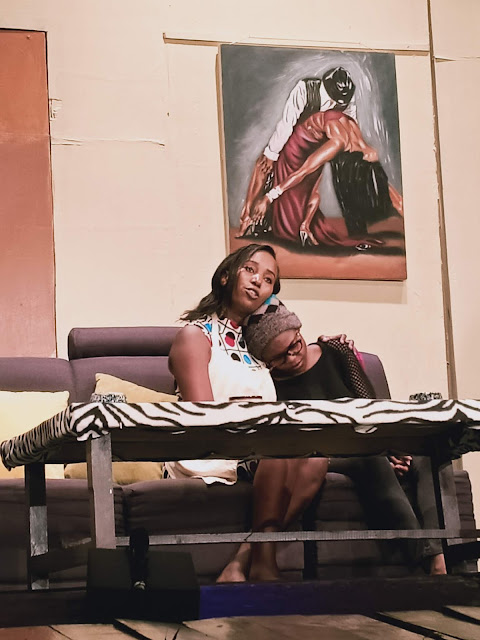 Fortunately, NM playwright Walter Sitati came up with a response to those unresolved issues, producing a sequel that is as good, if not better than NM1. He also brought on board several well-seasoned new cast members, including Gilbert Lukalia, Veronica Waceke, Sam Psenjen and Melissa Kiplagat, all of whom fit right in with HoA regulars, like Peter Kawa, Pauline Kyalo and others. What’s more, they all worked well under Caroline Odongo’s direction.
Gilbert introduced a whole new character in the form of the Governor’s no-nonsense father who embodies the fiery wisdom of the elders. Gilbert also brought his formidable set designing skills to the production, enabling set changes to move swiftly and seamlessly. 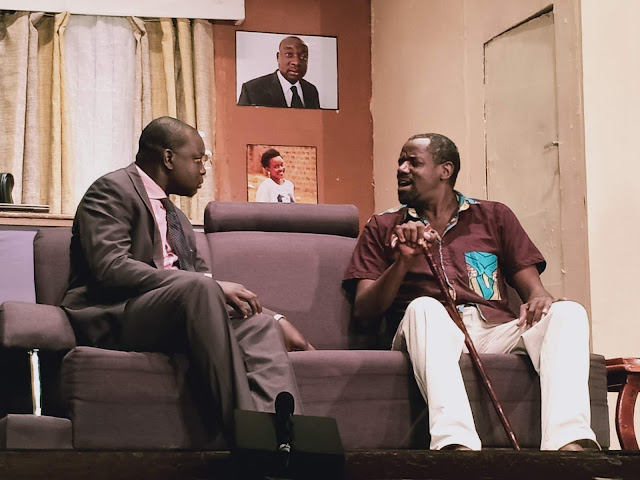 Meanwhile, Veronica Waceke took on the role Nessa’s mother and estranged wife of Dakaria in a wise, decisive and comforting style. What’s more, she’s prepared to use her legal skills to seek justice for Ziki through the court, suing both the Governor and her spouse as well.
Ziki herself makes a comeback in NM2. She reappears as an angelic apparition to speak reassuring to Nessa as she dreams. Her ghostly arrival adds an otherworldly touch that comforts her friend and lifts the fatal shroud that had fallen as the first NM came to an end. 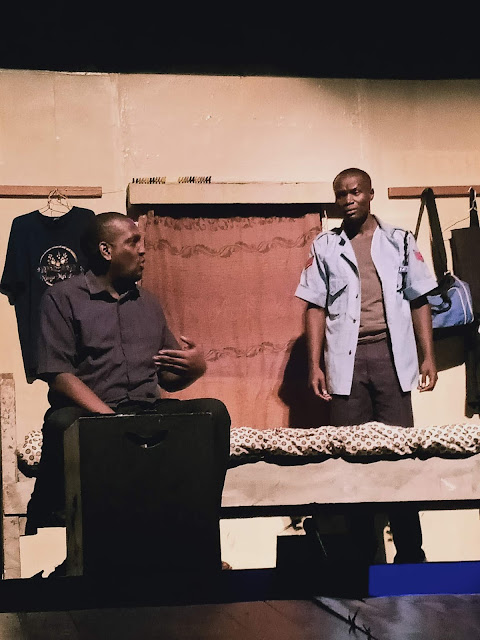 Meanwhile, Sam Psenjen is outstanding, playing the pitch - perfect parody of Police Chief Shabaka who, like Dakarai’s wife, has little sympathy for his tragically compromised traffic cop. Indeed, the only one who has a spec of sympathic feeling for Dakarai is Officer Tamela (Pauline Kyalo) who plays tough in the midst of Nairobi traffic but has a soft spot for her former colleague.
Melissa Kiplagat as the no-nonsense Judge who gets shipped out of her seat by backdoor means, gets replaced by one who’s sure to side with the powers that be, for a price of course.
But the crooks in NM2 don’t get the last word. Instead, it’s the Poet Mufasa whose powerful slam poetry sums up Sitati’s overriding message: that the courts won’t crack the corruption conundrum. The change required has to first come from within ourselves. Only then can we, with clean hearts, witness an end to the corruption at large. 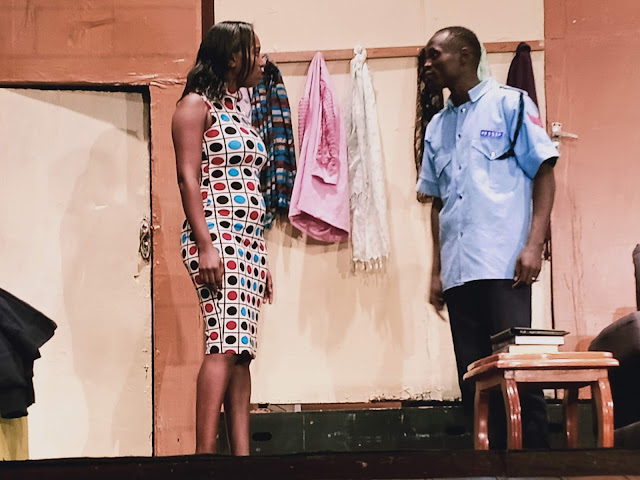 Kenya’s former Chief Justice, Willy Mutunga, speaking as a post-production guest of honor, had a slightly different take on winning the war on corruption. He appreciated Sitati’s powerful suggestion that the solution doesn’t reside with the courts. He also liked the way Sitati satirized lawyers and judges. But he advised artists of the need for a deeper class analysis and understanding that corruption is global. Those who indulge in it locally are merely puppets in an international game.
“So next time, you might want to include a Chinese [in your play],” he said partly in jest and essentially for real.


Posted by Margaretta wa Gacheru at 12:17