EAST AFRICAN ART AROUND THE CITY 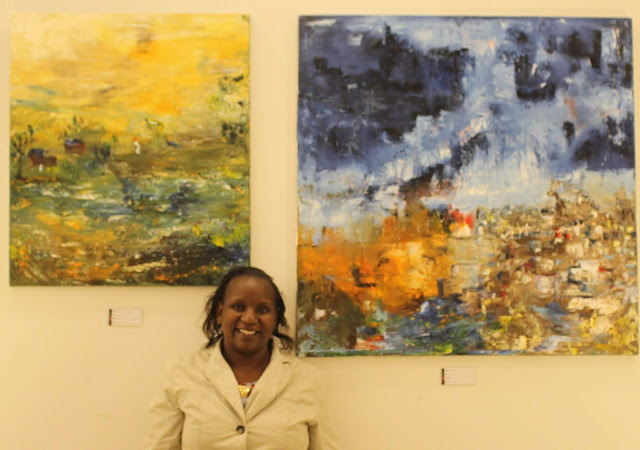 There used to be an advert that ran in the 1980s inducing young women to smoke. It read, “You’ve come a long way baby”, suggesting smoking was the mature thing to do. Feminists and non-smokers generally despised the ad. But as an adage, the phrase rings true when it comes to Rahab Njambi Shine who currently is part of a group exhibition at Village Market. 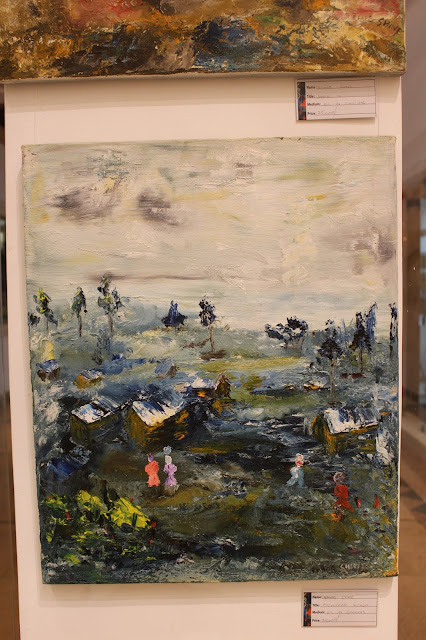 Rahab is the only Kenyan in the show since the other four exhibiting artists are Ugandans who frequently come to Kenya where their artworks seems to sell well.
Rahab is also the only Kenyan woman in the exhibition. (Maria Naita is the one Ugandan.) But that’s not an uncomfortable position for her to be in since she was the only female member of Banana Hill art studio for years before the studio was transformed into a gallery, and she and Shine Tani became its Managing Directors.
The other big difference between Rahab and the other artists in their current Second Edition of an exhibition entitled ‘Indigenous Mashariki’ is that the others studied in professional art schools, most notably the world-acclaimed Margaret Trowell School of Fine Art at Makerere University.
In contrast, Rahab has gone through rigorous training together with her fellow Banana Hill artists, all of whom literally learned how to paint from Shine who himself had gained his inspiration from an older brother who painted briefly but didn’t have the same passion for it as his younger brother did.
Rahab was a secondary school girl when she met and fell for the artist who had started off as a Nairobi street entertainer before he discovered the art galleries and soon gave up acrobatics for art. Once the two got together, she, like several other aspiring artists, began learning the basics of painting from Shine.
Established artists like John ‘Silver’ Kimani, James Mbuthia, Martin Kamunyu, and even Joseph Cartoon all passed through what Shine and Rahab established under their roof which was initially called Banana Hill Art Studio.
Rahab had never touched a paint brush before she met Shine. She had never been to an art gallery or met another working Kenyan artist before she met her future husband and the father of their children.
But today, thanks to her devotion to art and determination to tell Kenyan people’s stories through it, she has developed her own skill and distinctive style and become one of Banana Hill’s leading artists.
One of Rahab’s daughters seemed to have emulated her mother’s early attraction to artistic men since her eldest girl, Njeri married the Makerere University-trained painter, Ronnie Ogwang who is also in their group’s ‘Indigenous Mashariki’ exhibition.
In fact, many of the Ugandan artists who exhibit at Village Market, including the four in the current show, got their start in Kenya showing their art at Shine’s and Rahab’s Banana Hill Art Gallery.
“Shine went personally to Kampala to meet the artists and invite them to exhibit at the Gallery. That they did, and most of them still have their work there,” Rahab says. Their relationship with Shine hasn’t stopped them from exhibiting elsewhere although they often gravitate back to Banana Hill.
But Ugandan artists aren’t the only East Africans that Shine has invited to exhibit at the Gallery. Currently, he has several Tanzanians’ artworks on show at the Gallery. They include Phidelis Hassan Kamwona whose elongated blackwood sculptures are inspired by Makonde ‘shetani’ [or spirit] carvings. Also, there are bright, colorful paintings by Malikita which are drawn in the surrealist style of the late George Lilanga. And there are even Tinga Tinga-styled paintings by Issa Saidi Mlaiponi, who is a nephew to the late Edward Saidi Tingatinga.
Coincidentally, the Nairobi Gallery next to Nyayo House is also hosting artworks by Tanzanian artists, all of whom are ‘disciples’ or followers of Tinga Tinga, the artist whose painting sold recently at the Art Auction East Africa for more than Sh5.5 million. In radical contrast, the price that Tinga Tinga-styled paintings are going for at both the Nairobi and Banana Hill Galleries is substantially less. Call it ‘affordable’ since it’s around a million times less.
The big difference between the Tinga Tinga-inspired art at Nairobi Gallery and that found at Banana Hill is that the former is all anonymous, unsigned. But at Banana Hill, the signature of Mlaiponi is clearly visible, making it more valuable for its individuality and authenticity.
In sum, Nairobi is increasingly looking not only like the economic but also the artistic hub of East Africa.


Posted by Margaretta wa Gacheru at 12:02